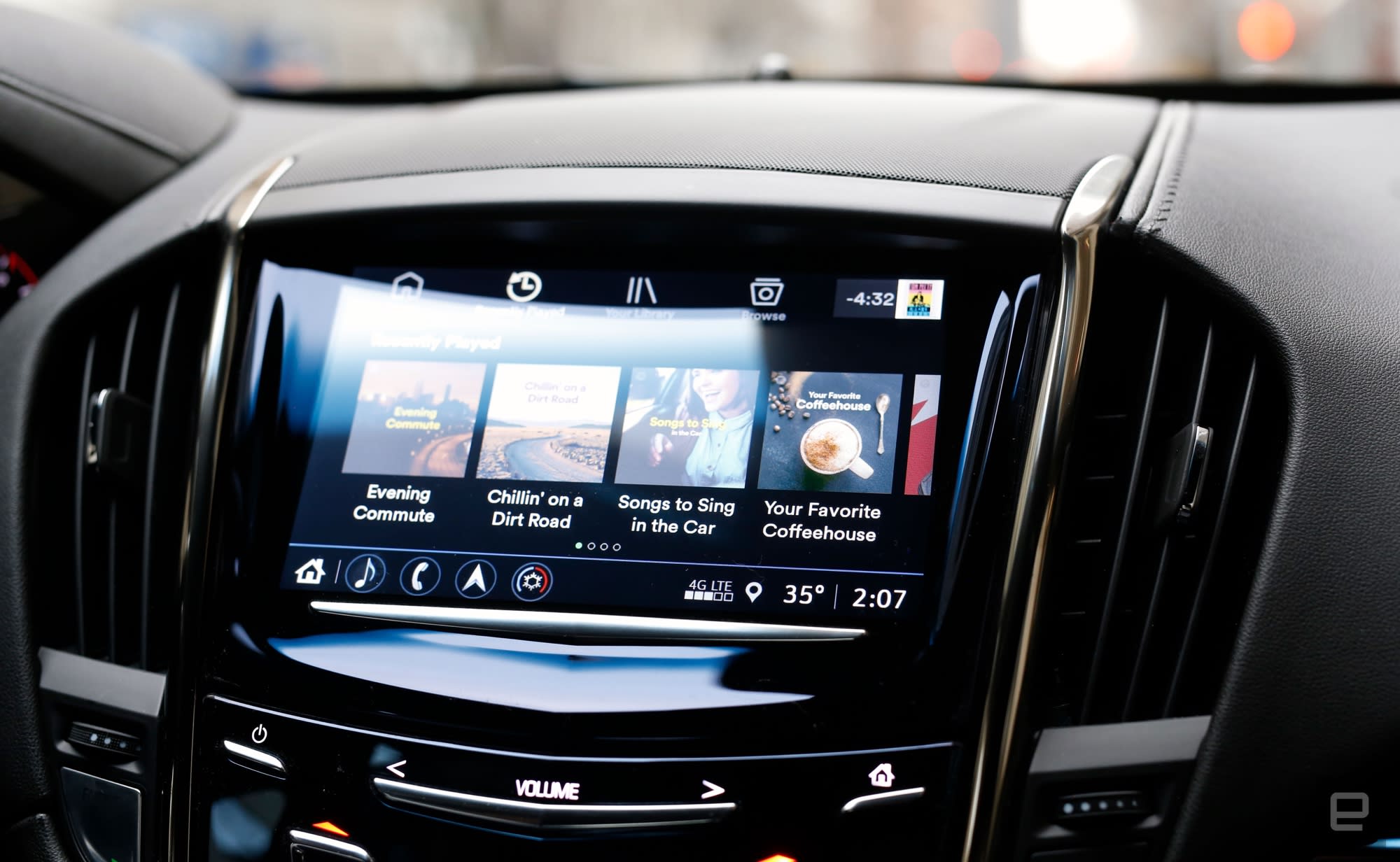 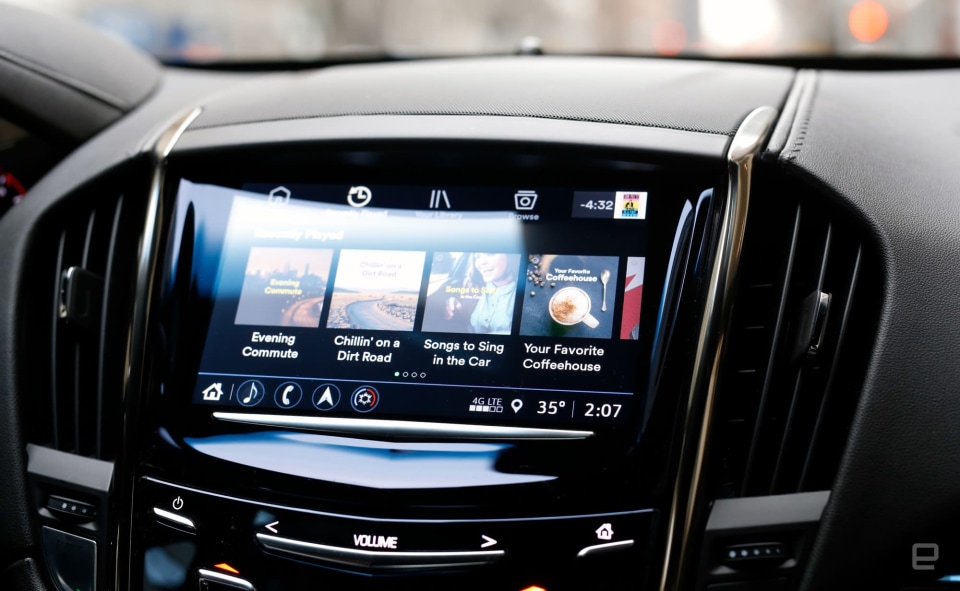 More than 70 million people subscribe to Spotify's streaming music, and a significant chunk of those subscribers use the service in their cars. The problem is, the experience of using Spotify in a car can vary pretty wildly from the experience the company has built for other screens. In a bid to change that, Spotify and Cadillac teamed up to create an app that runs on those Caddies themselves and streams music over their built-in LTE connections. Right now, owners of the XTS, CTS, ATS, CTS-V and ATS-V can start using the app, but it'll appear on upcoming 2019 Cadillacs and still more GMC vehicles shortly.

On the surface, this doesn't sound like a particularly huge deal -- apps for services like Pandora and iHeartRadio already exist for use in Cadillacs, after all. What seemed special after playing with this new Spotify experience for a little while is just how... Spotify it felt. Once you've signed into the account (either by punching in credentials on the car's touchscreen or generating a PIN inside Spotify on a smartphone), you'll find a slew of suggested playlists, a history of recently played tracks and full access to your Spotify library. There are some limitations due to driver distraction guidelines -- you can't sift through long lists of tracks, for instance -- but the service's suggestions are good enough that I didn't need to worry about being served lousy or inappropriate music.

More importantly, whipping through these options and finding the right tunes to play felt incredibly fast on the Cadillac's capacitive touchscreen. While the line between car interfaces and smartphone interfaces has started to blur in recent years, the process of navigating options and settings in a vehicle still needs a lot of polish. With this Spotify app at least, I got the impression that engineers and designers from both sides of the company wanted to stick as closely as possible to the Spotify experience everyone is already used to.

That close collaboration also means that Spotify doesn't act like a separate app so much as a core part of these cars' radios instead. If you turn off the car, get out, walk away, listen to some Spotify music and return to the car, the app picks up right where you left off. You're also able to set specific Spotify playlists as radio presets, for occasions when you need those coffeeshop jams fast. If nothing else, it's clear that Spotify wants to become the default means of listening to music in cars, and it believes deep integrations like this are how it will win the day.

Since this is the first deep car integration Spotify has worked on, a few things I hoped to see just weren't there yet. The biggest omission (for me, anyway) was support for podcasts -- Spotify has invested time and effort into fleshing out the podcast experience in its desktop and mobile apps, and considering the national average commute time hovers around 45 minutes, it seems odd that Spotify would've chosen to leave this out. That said, Jonathan Tarlton -- Spotify's Senior Manager of Automotive Business Development -- told Engadget that the company is committing to a quick update cycle.

Still other features are in the offing. To use Spotify on a Cadillac, you have to be a Spotify Premium subscriber, but according to Tarlton, Spotify is also exploring ways to bring a free listening experience to these vehicles. There's no voice control here yet either, though we know based on job listings that Spotify is taking those kinds of interactions very seriously.

Those shortcomings, while mildly confusing, are understandable given the time involved; it only took four weeks to go from early iteration to near-final code. While that first push is complete, teams in the US and Spotify's native Sweden are cooking up ways to make Spotify in cars more thoughtful and responsive. Thanks to in-car sensors that wouldn't be accessible if Spotify was just running as an app on a phone, future versions could take into account new kinds of data and fold those signals into its suggestion model. Theoretically, Tarlton said, the in-car Spotify app could tell when the windshield wipers were engaged and could proffer a handful of appropriate rainy driving playlists. (When asked for a concrete example of a sensor-driven feature in progress, Tarlton basically told me to stay tuned.)

Since Spotify is as much a data science company as it is a streaming service, I'd argue it's very welled suited to customizing what we hear based on the nuances of our vehicles. And to be clear, even though Cadillac gets the first crack at this new experience, Spotify is working to get similar apps up and running on cars from a wide swath of manufacturers. Spotify is coming for your car, and considering what we know about the company's plans, this might be one invasion worth embracing.

In this article: av, cadillac, cars, entertainment, infotainment, spotify, TL18TAIN, transportation
All products recommended by Engadget are selected by our editorial team, independent of our parent company. Some of our stories include affiliate links. If you buy something through one of these links, we may earn an affiliate commission.