The Tesla Autopilot system was engaged when a Tesla Model S sedan was crushed as it rammed into a stopped truck at 60 MPH in Utah last week, the driver has told police. The driver luckily escaped with only a broken foot, though the car suffered extensive damage.

When interviewed by police, the Tesla's 28-year-old driver "said that she had been using the 'Autopilot' feature," and was looking at her phone shortly before the accident in South Jordan, near Salt Lake City, according to a statement Monday from South Jordan Police Sgt. Sam Winkler. 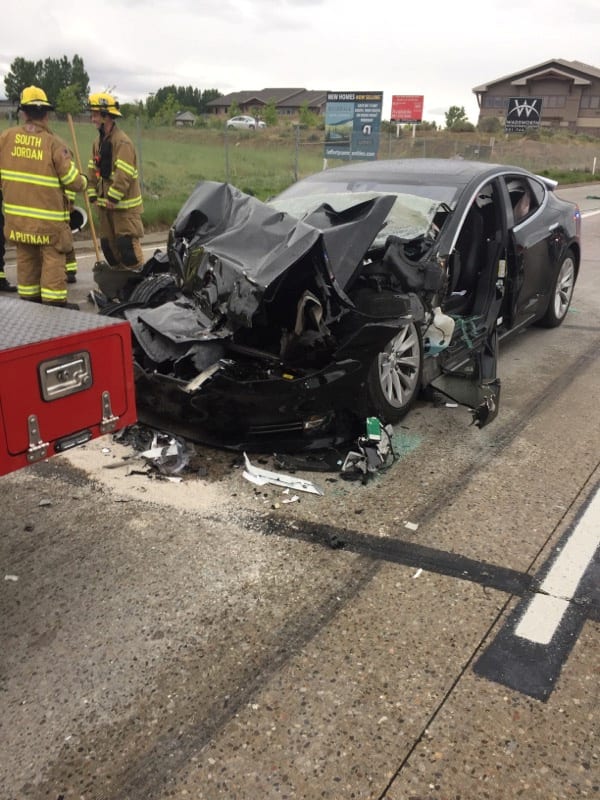 Winkler told The Deseret News that the driver, who hasn't been identified by police, had entered an address into the car's GPS and was looking on her phone for possible alternate routes. She "looked up just as the accident was about to happen," he said.

Tesla CEO Elon Musk responded to the accident in a tweet Monday, saying that it was amazing the driver wasn't more seriously injured. He also complained that the crash was being unfairly covered by the media, which he said often overly focuses on the Autopilot system while ignoring regular fatal highway accidents.

It's super messed up that a Tesla crash resulting in a broken ankle is front page news and the ~40,000 people who died in US auto accidents alone in past year get almost no coverage https://t.co/6gD8MzD6VU

But Musk also admitted that the system "certainly needs to be better."\

It certainly needs to be better & we work to improve it every day, but perfect is enemy of good. A system that, on balance, saves lives & reduces injuries should be released.

The semi-autonomous Tesla Autopilot system is supposed to maintain certain speeds, automatically brake when necessary and even change lanes. But Tesla emphasizes that "every driver is responsible for remaining alert and active when using Autopilot, and must be prepared to take action at any time."

There was no indication that brakes were used when the car crashed. "Based upon witness information, the driver of the Tesla did not brake or take any action to avoid the collision," Winkler said in his statement.

The Tesla driver could face charges for failing to maintain the safety of her car, which would be a traffic infraction, Winkler told The Associated Press.

Police are "currently working with technicians from Tesla to gather and review data stored within the vehicle, which may take several days," said Winkler. Police have contacted the National Transportation Safety Board about the accident, but the NTSB has not yet launched its own investigation.

The NTSB is already investigating the Autopilot system in a crash of a Tesla Model X in California in March in which the driver was killed. The NTSB and the National Highway Traffic Safety Administration are also probing a fiery crash of a Model S earlier this month in Florida that left two teens dead. Officials are reportedly investigating the emergency response to the serious battery fire that occurred.

All products recommended by Engadget are selected by our editorial team, independent of our parent company. Some of our stories include affiliate links. If you buy something through one of these links, we may earn an affiliate commission. All prices are correct at the time of publishing.
Tesla Autopilot was engaged during 60 MPH crash, driver tells police
accident
autopilot
huffpost
modelS
partner
syndicated
Tesla
transportation
hidden:vv_3x4:82834f35-f64d-3e2d-8517-44dfc3ee92e1
hidden:vv_09x16:a8bd21e6-1b2a-3ae1-a3f0-b612cda66ba9
hidden:vv_16x09:479cfaaf-d408-3cf9-aba4-fcfbd21f278f