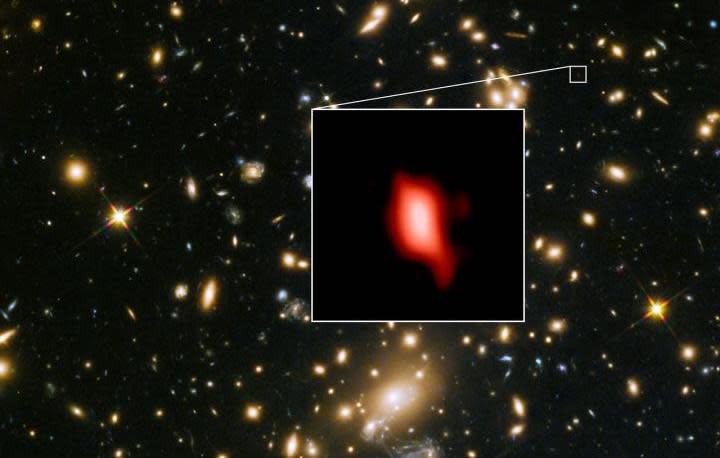 After the Big Bang occurred, there was no oxygen in the early universe. Stars had to be born before oxygen could be created by fusion processes. When these stars died, the oxygen was released into the universe. Now, a research team using the ALMA telescope has found ionized oxygen in an early galaxy, MACS1149-JD1, that is dated just 500 million years after the Big Bang. This means that stars were created much, much sooner than previously thought.

"This galaxy is seen at a time when the Universe was only 500 million years old and yet it already has a population of mature stars," said Nicolas Laporte, an author of the research paper and researcher at the University College London. "We are therefore able to use this galaxy to probe into an earlier, completely uncharted period of cosmic history."

The question is when did the earliest stars form after the Big Bang? The team used infrared data of MACS1149-JD1 from the Hubble Space Telescope and the Spitzer Space Telescope to measure the observed brightness of the galaxy. The researchers came to the conclusion that the galaxy fits a model that has stars forming in the early universe just 250 million years after the Big Bang.

Scientists have long wondered when "cosmic dawn" occurred, which is when the first galaxies became bright and the universe was no longer cloaked in utter darkness. This new discovery will help researchers further determine when that might have been, and specifically, questions whether it could have occurred even earlier than scientists thought.

In this article: alma, bigbang, hubble, space, tomorrow
All products recommended by Engadget are selected by our editorial team, independent of our parent company. Some of our stories include affiliate links. If you buy something through one of these links, we may earn an affiliate commission.