In NBC’s ‘Reverie,’ VR can be a little too enticing

The tech-centered show premieres on May 30th at 10 PM ET.

The first episode of NBC's Reverie opens with a bang as a man leads a woman through a stunning library with a crystal chandelier, discussing a "quiet night in." They're both dressed to the nines, so it's clear what's about to happen is anything but. He takes her out onto a gorgeous balcony to show her the surprise that's waiting for her. She asks, "What did you do?" as she looks on in awe, taking in the small dinner table with champagne at the ready, string quartet and gorgeous sky filled with balloons. But the perfection of the scene is marred by just one thing: It's too perfect. Everything is just so good it can't be real. And it turns out, it's not.

The premise of Reverie, which premieres on May 30th at 10 PM ET/9 PM CT, is that of a near-future world in which VR has advanced far beyond what we are capable of right now. The virtual reality in the show, also called Reverie, gives people the ability to live out their dreams and fantasies -- and even bring loved ones back from the dead. The problem is, when you're presented with a world that gives you everything you want, why would you come back from it? That's what Onira-tech, the company behind Reverie, is facing, and because of it, people are falling into comas. Enter Sarah Shahi, who plays Mara Kint, a former hostage negotiator who's hired by Dennis Haysbert to go into people's Reveries and convince them to leave.

The Reverie tech works thanks to an implant (no clunky headsets here!), which is called the BCI (brain-computer interface). It's actually constructed using living tissue, which helps it merge with the body and makes it impossible for a person to tell that the Reverie is a constructed environment, designed by Sendhil Ramamurthy's Paul Hammond. The current version of the software only allows one person per Reverie; a more advanced system in which a VR experience can be shared among multiple people is being tested, but it's just a prototype. Jessica Liu (who plays the brains behind the technology, Alexis Barrett) explains that they are going to test that version 2.0 of the software on Mara in order to insert her into other people's VR fantasies.

The idea for the show occurred to Reverie creator Mickey Fisher, who's a self-described avid reader of tech blogs, after he ordered a Google Cardboard to see what all the VR fuss was about. He felt instantly transported by even the least expensive version of this tech and began to wonder where VR could go and what its implications were. Specifically, who would want to come back from that? And how would you get them out if they chose not to?

The answer: a hostage negotiator, like Shahi's Mara. "That was the moment that the whole thing kind of came together," Fisher told Engadget. "Ultimately it became this story about what I hope and what I feel is a timely story, which is about the importance of empathy and human connection, and it all sort of found its way into this pilot." 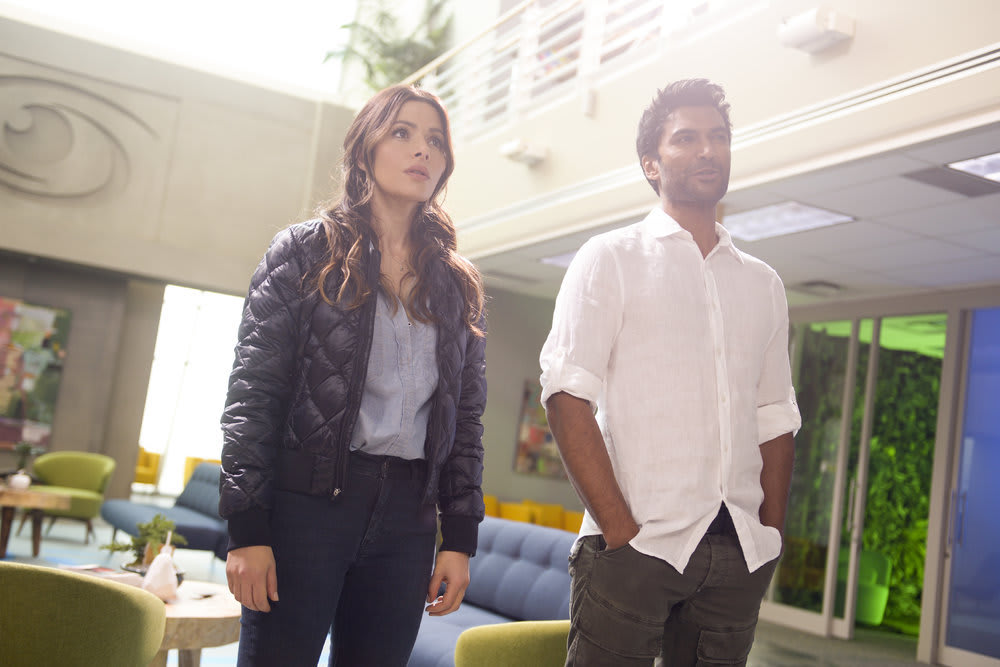 That emphasis on empathy is key to Reverie, which is a show built on technology. It examines the importance of empathy and human connection in a world fueled by advanced tech. Fisher is a believer in the good that technology can do, so it's not supposed to be a dark, dystopian, worst-case scenario. "We wanted to have a grounded, real look at the way these things play out today in people's lives, and how to tell real emotional stories without it being a sermon on how technology is bad," he said.

However, that doesn't mean that Fisher and co-executive producer Tom Szentgyorgyi weren't interested in exploring both good and bad ways that the tech in Reverie could be used. While it's a look at where VR could be (and likely is) heading, it's not anything we're currently capable of -- because the key to Reverie lies in its connection with humans. The virtual reality we have access to right now consists of preprogrammed experiences that the user is dropped into via interfaces like the HTC Vive and Oculus Rift. While the user can interact with the VR world, the world doesn't necessarily interact back. That's not the case in Reverie. "One of the hallmarks of the Reverie technology is that it's dynamic," Szentgyorgyi said. "It reacts to you. In essence, anytime you tell someone a fantasy, one of your fantasies, you're essentially drawing a little bit of a self-portrait. You're showing something about yourself." The key here is that Reverie learns about you through what you request from it and the worlds you ask it to build. The program then uses that information to make your VR fantasies as realistic as possible. "In so doing," Szentgyorgyi continued, "[it] can often show startling insight into people if you know how to look at it."

That isn't limited to the people Mara is trying to save, who pay to use the program. Mara herself is entering Reveries. It might be to save other people, but in doing so, the program is slowly learning about her. It provokes some fascinating questions about the technology's capabilities. The producers promise some "pretty fantastic environments" over the course of the first season, thanks to special effects house CoSA, which has also worked on shows like Marvel's Agents of S.H.I.E.L.D. and Gotham.

But you can't delve into the world of VR without asking, "What if this hurts people?" After all, the premise of the show is that people are falling into comas while inside their Reveries. Does the company behind the technology, Onira-tech, have any responsibility for the way people choose to use their tech? What happens if users' fantasies aren't necessarily healthy? And what if someone drags another person into a Reverie without their consent? These are all issues that the series will confront over the course of its first season. But just while Reverie has seemingly endless possibilities, it definitely has limits. While it can figure out what you want from a constructed VR world, it can't tell what you need. "The fantasy is what you want, but what Mara has to determine, to . . . make contact with people, to speak to them and address what's got them trapped, she has to figure out what they need," Szentgyorgyi explained.

The crux of the show is about want versus need and the empathy required to close the distance between the two. The VR worlds are incredible and lush, a real sight to behold, but the technology is just a vehicle to tell an emotional story. Szentgyorgyi wants to drive that point home: "That is what all the tech drives at, it's the story of people hurting and healing and Mara helping with that."