It's like the existing Fire TV plus a full-fledged Alexa experience.

It's been almost four years since Amazon first introduced the Echo smart speaker and its virtual assistant Alexa. It's also been just over four years since the the company first released its Fire TV set-top video box. Now, the two products are converging in a way they haven't before, in the form of the Amazon Fire TV Cube.

As you might expect, it's a cube-shaped box you plug in to your TV; it runs the expected suite of apps like Netflix, Hulu, PlayStation Vue, HBO Go, Sling and Amazon's Prime Video service. And like the current Fire TV Stick and Fire TV box, you can talk to Alexa to search for movies and shows as well as access thousands of third-party "skills."

But the Fire TV Cube is essentially a full-featured Echo, as well. It's always listening for the Alexa wake word, and you can talk to it even when your TV is off. The new box has eight microphones built in, similar to existing Echo hardware, which means you can speak to Alexa whenever you want as well as navigate the Fire TV Cube's interface with your voice.

The other major differentiator for the Fire TV Cube is how it works with other home theater devices you may have in your living room. The slick glass sides of device hide a multidirectional IR blaster (they also pick up dust very easily, unfortunately). The Cube also supports the more modern CDC (via HDMI) technology, so the Cube can power up your TV, sound system and even cable box, if you want it to. In a demo, Amazon showed off a routine where you can just say "Alexa, I'm home" — the home theater gear all came to life, along with the lights in the room. You can customize the routine to match the smart home gadgets you have that Alexa can control, or just use a simple "Alexa, watch TV" to start everything up. 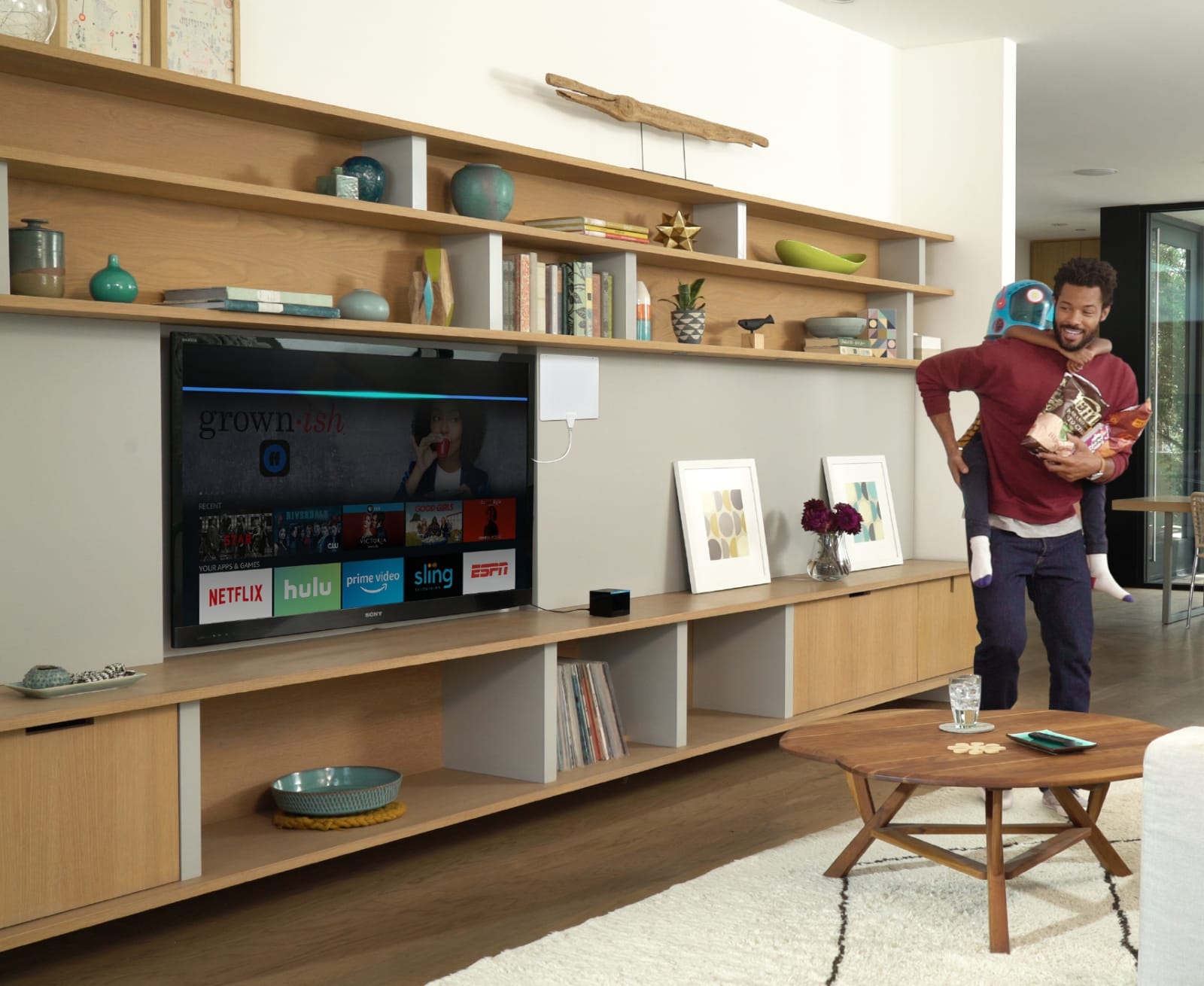 The Fire TV Cube's voice search is more capable than past versions, as well. A good example is control over the aforementioned cable box. Once the set-top box recognizes it, it basically acts like a remote. You can say "Alexa, tune to NBC" and it'll know to switch over to the cable feed and the requested channel; you can also say "tune to channel 11" if you're the sort that remembers your cable guide.

Amazon says that the Cube supports boxes from Comcast, Dish and DirecTV and that 90 percent of households with cable or satellite TV should be covered. And if you want to hide your ugly cable box away from your otherwise-pristine living room setup, Amazon is even including an IR extension cable that you can place next to your cable box. That lets the Cube turn it on and off when the two devices aren't in line-of-sight.

If you're more inclined to use an over-the-top TV service like PlayStation Vue or Hulu's live TV, Alexa will work with that too. If you request a specific network, channel or show, the Fire TV Cube will search through whatever services you've hooked up, including ones that provide live TV. The Fire TV Cube can do basically everything else you would do with your voice, with the added bonus of not having to hold down a button on your remote. (The Cube comes with the standard Amazon remote for when you don't want to talk, or if you do want to use the voice button.) The UI has been slightly modified, taking some cues from the Echo Show. There are small overlays near the top and bottom of the TV with suggestions like "Try saying 'Alexa, show me dramas.'" Those prompts are pulled directly from the Echo Show and can definitely be helpful giving you ideas of just what you can ask the device.

If you know exactly what you're looking for (or what specific app you want to open), you can of course tell that to Alexa and go straight to what you want to watch. That even works when the TV is off — so if you always go straight to Netflix first, you can say "Alexa, launch Netflix" and the Fire TV Cube will power everything up and tune in to Netflix. Finally, the Fire TV Cube can do almost everything the Echo can do, including adjust smart home devices and run the many skills that are available; when possible, it'll do so with visuals. Asking for your weather forecast shows a nice graphic on the TV, and daily briefings can be accompanied by video (just as they are on the Echo Show). Messaging and voice calls aren't supported, as the company wanted to focus on entertainment first; that's similar to the Alexa implementation in the Sonos One. But for most people, the Cube will do just about everything that an Echo can do.

We'll have to try the Fire TV Cube out in person before we can pass judgement on how useful an always-listening set-top box is, but at $119.99, the price is low enough that it should provide a worthwhile upgrade over the existing $69.99 Fire TV, especially if you don't have an Echo already. Amazon has proven that Alexa is capable enough to drive plenty of Echo sales, and there's little reason to think it won't do the same with the Cube. It'll ship on June 21st, and Prime customers can pre-order today and tomorrow and get the Cube for $89.99.

All products recommended by Engadget are selected by our editorial team, independent of our parent company. Some of our stories include affiliate links. If you buy something through one of these links, we may earn an affiliate commission. All prices are correct at the time of publishing.
Amazon's Fire TV Cube squeezes an Echo into its set-top box
Alexa
amazon
AOLoriginals
av
DailyShow
Engadget
EngadgetToday
EngadgetVideo
entertainment
fireTV
fireTVcube
gear
streamingvideo