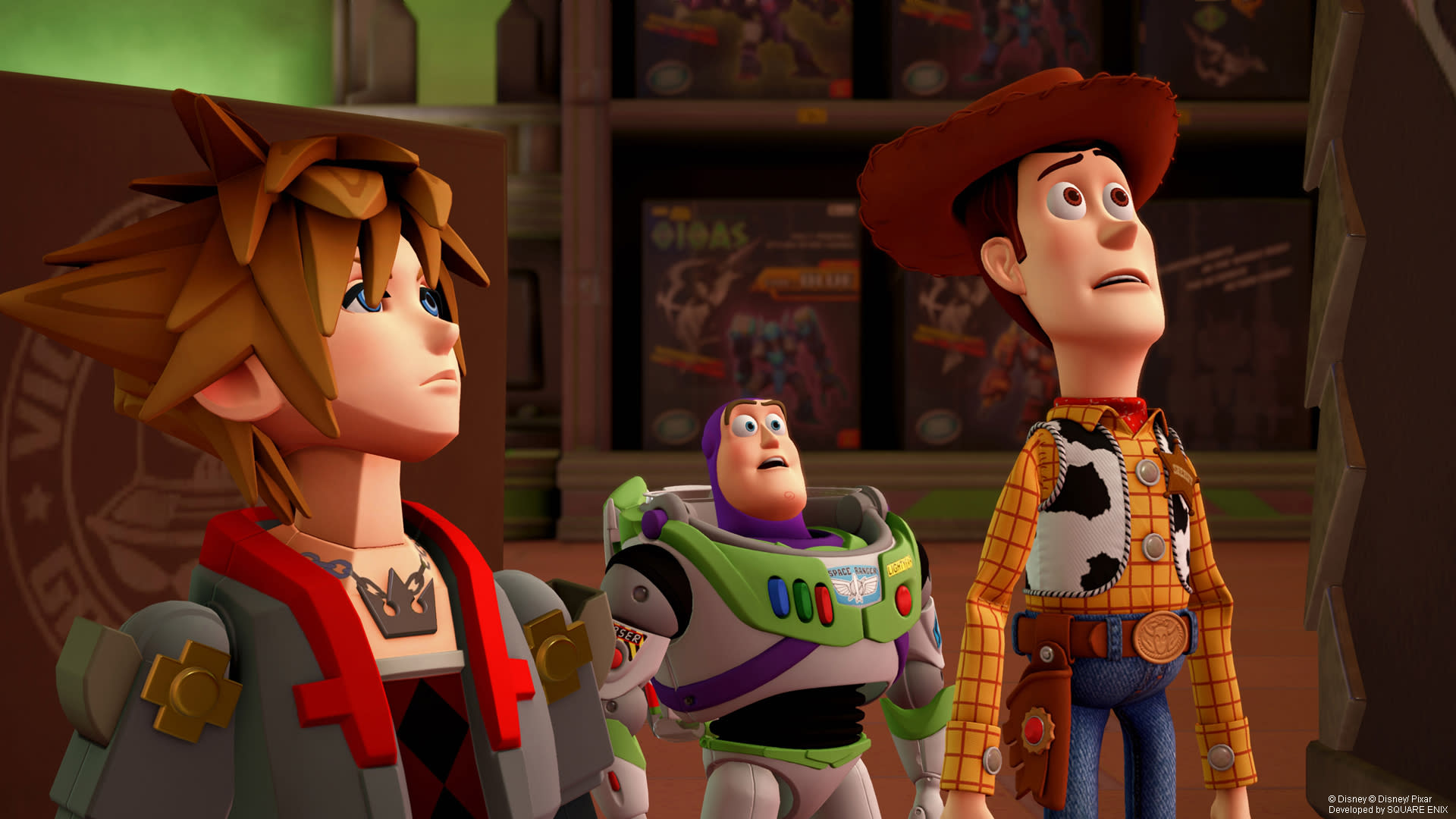 Kingdom Hearts II was my jam. I can't recall the number of times I've played those opening hours in Twilight Town. When the game came out in 2005, I was a 15 year-old grappling with adolescence and the relentless pressure to figure out my career path. Kingdom Hearts, with its colorful Disney worlds and random Final Fantasy cameos, was the perfect escape from reality. Over time, though, my interest in the series has waned. I enjoyed Birth By Sleep, but found the rest of the spin-offs to be underwhelming and full of needlessly convoluted story beats.

Kingdom Hearts 3, though, makes me feel like a teenager again. At E3 2018, I played two demos that covered the Hercules and Toy Story-inspired worlds. Both were bright, cheery affairs, with plenty of Heartless to pummel with a ridiculous arsenal of keyblade combos, magic and amusement park-themed attacks. I was surprised by how quickly my fingers and thumbs recalled the basic combat system; within seconds I was launching Sora into the air and chaining together a bevy of slices and spells. The fights were chaotic, but in a way that was familiar and strangely comforting.

That's not to say Square Enix doesn't have some new ideas. In the Olympus demo, for instance, I had to guide Sora up a huge cliff while a giant Heartless launched rocks from above. The keyblade wielder will now auto-run up surfaces that have a shimmering sheen to them. "There are a lot of open world games," director Tetsuya Nomura said via an interpreter. "I think a lot of them just focus on trying to go bigger and bigger in a horizontal map. But when I thought about having dynamic actions, I felt that verticality should be very important to these types of games." At the top, I had to grapple with a multi-stage boss battle that included a ride on the Disney World-inspired Big Mountain Railroad train. These attractions are new to the franchise and break up the usual hack-and-slash monotony with some special movement or, in this case, shooting sequences. "Disney theme parks are a place that everyone gets excited [about] once they step right in," Nomura said. "It doesn't matter if you're young or old, and [many people] will have some kind of fun memory from one of those theme parks. I just wanted to recreate that in the game. I also wanted some kind of move in the game that was fun just by looking at it."

Despite these additions, the game felt like the Kingdom Hearts I fell in love with more than a decade ago. For one, Sora was wearing his classic black and yellow outfit from Kingdom Hearts II. My guess is that the world acts as a prologue, or tutorial, to Kingdom Hearts 3, before the spiky-haired hero picks up his new garb and abilities. I was flanked by Donald and Goofy too, who appeared in previous games and regularly help out with attacks, spells and helpful team-up abilities. Just hearing their voices mid-battle brought a huge nostalgic smile to my face.

The Toy Story-themed demo was just as impressive. Andy's room was the first time since 2005 that I had been floored by the sheer detail and film-like accuracy of a Kingdom Hearts world. The space is identical to how it appeared in the Toy Story trilogy, and it was thrilling to climb out the window and jump down to the driveway below. The world isn't perfect -- you can't just roam around the house, for instance, or open up drawers -- but the game makes it easy to buy into the illusion. You really feel like you've stepped into a Pixar film with Woody, Buzz Lightyear and the gang.

I never felt that way during the handheld Kingdom Hearts titles. The worlds in Birth By Sleep, for instance, were hollow and cramped, as if you were fighting through a cheap haunted house inspired by the original movie. The difference with Kingdom Hearts 3, of course, is the hardware it's running on. With the PlayStation 4 and Xbox One, Square Enix can be far more ambitious with its level design and get eerily close to the visual fidelity in Disney and Pixar's latest movies.

"And I think that's a really close to the concept that we originally had for Kingdom Hearts," Nomura said, "which is to just immerse yourself and enter the world of Disney films. I think we were able to achieve that kind of goal that we had in mind when we first set out with the series."

And then there's the story. At this point, I care little about Xehanort and his plans to form the legendary X-Blade. I understand the overarching plot (thanks, internet) but have learned to let go when there's a scene or collectible document that I don't understand. And yet, I felt a warm, fuzzy sensation the first time an Organization XIII jacket appeared in my Kingdom Hearts 3 demo. The group of troublesome "nobodies" were an excellent part of Kingdom Hearts II, and I'm looking forward to their return (especially Sora's nobody, Roxas) in the new game. When I put the controller down, I was left wanting more. I wanted to see additional worlds and how Sora's combat abilities evolve. And I wanted to know how the franchise will bring back some of my favorite Kingdom Hearts II characters, including Axel and the Twilight Town gang. The demos, in short, reignited my interest in a franchise that I thought I had long grown out of. When the game comes out next January, I'll be the first to board Sora's colorful Gummi ship and explore the new worlds Square Enix has meticulously recreated.

In this article: art, e32018, gaming, kingdomhearts, kingdomhearts3, sony, squareenix
All products recommended by Engadget are selected by our editorial team, independent of our parent company. Some of our stories include affiliate links. If you buy something through one of these links, we may earn an affiliate commission.