They could lead to a new wave of ultra-thin PCs.

Intel already has a wide variety of eight-generation laptop processors targeting performance and gaming. But with its latest round of chips -- a new batch of U-series CPUs for mainstream laptops and the debut of Y-series processors for very thin machines -- the company is focused on improving the ultraportable laptop experience. For one, they all feature integrated gigabit WiFi, which will vastly improve your networking performance on modern AC routers. There's also a quad-core audio DSP, which will make it easier for laptops to recognize voice commands for multiple virtual assistants. Even better, it lets you shout commands while your computer is asleep. With the new Y-series chips -- the Core M3-8100Y, i5-8200Y and i7-8500Y -- Intel says we can expect to see more ultrathin PC designs from PC makers. You'll see some of those announced this week alongside IFA in Berlin, but it'll be interesting to see how these new chips affect PC designs for next year. (I can't reveal which model it is, but one machine during Intel's press briefing felt impossibly light for a 15-inch PC.) The Y-series processors only have two cores, but their low 5-watt thermal profile means most systems won't need a fan to run them, and they should offer significantly better battery life than the rest of the 8th-gen lineup. 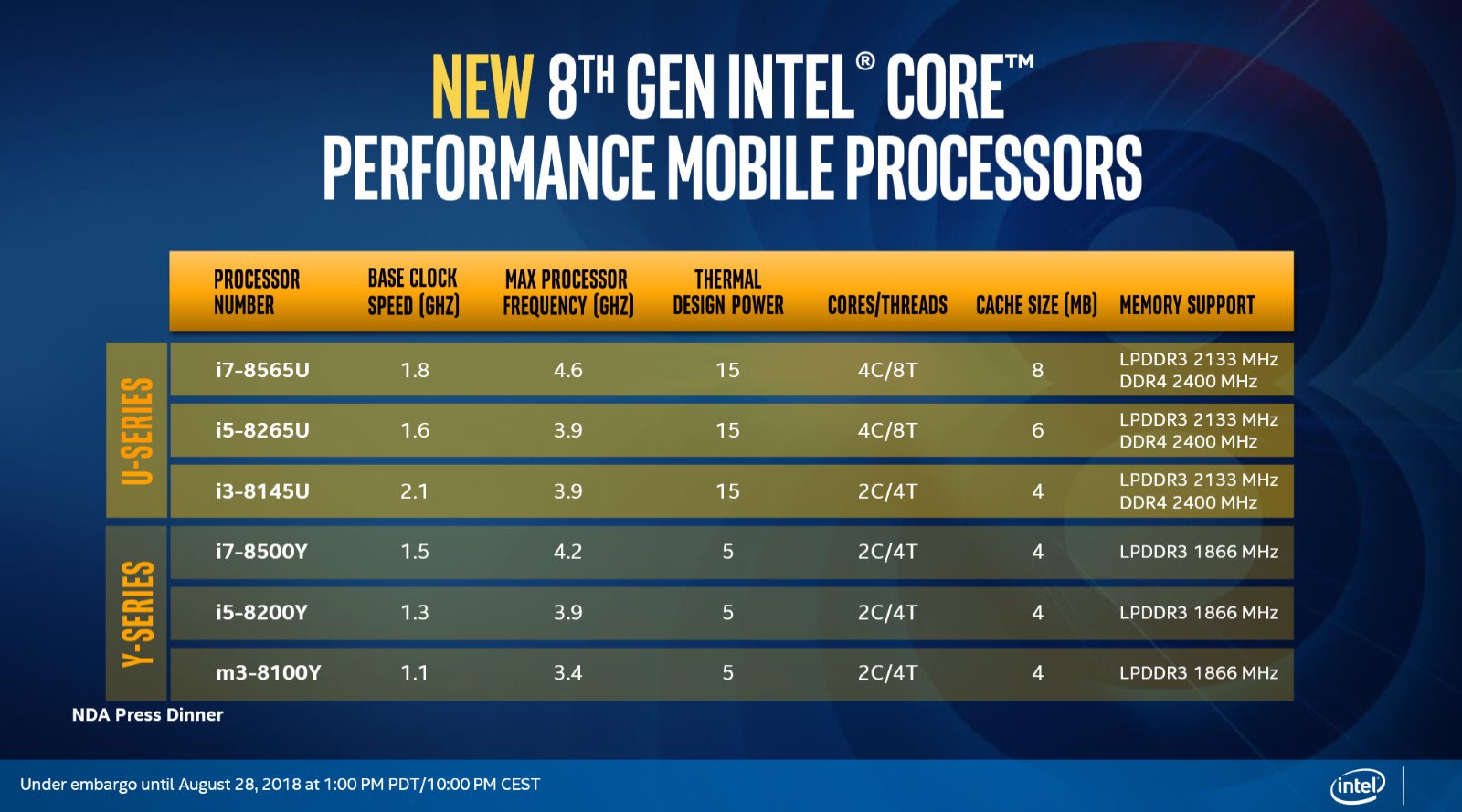 Intel's updated U-series processors are still meant for slightly beefier ultraportables, but they'll feel faster than last year's models thanks to that integrated gigabit WiFi. And the new audio DSP could be useful if you're juggling Cortana and Alexa at the same time. To make sure you're getting a new U-series model, computers with these new processors will have a bright yellow "Optimized for Connectivity" printed below Intel's logo. That's a clunky way to differentiate them, but at least discerning buyers have something to look out for.

Intel claims the new U-series CPUs are up to 6.5X faster than a 5-year-old system in 4K video encodes when comparing the i5-8265U to the i5-8400U. In real-world figures, that means you should be able to encode 4K video in real-time (or at least, much closer to it than before). Additionally, Intel says the refreshed chips are also twice as fast in World of Tanks when compared to a 5-year-old machine. That's not too surprising, though, given how far the company's integrated graphics have come.