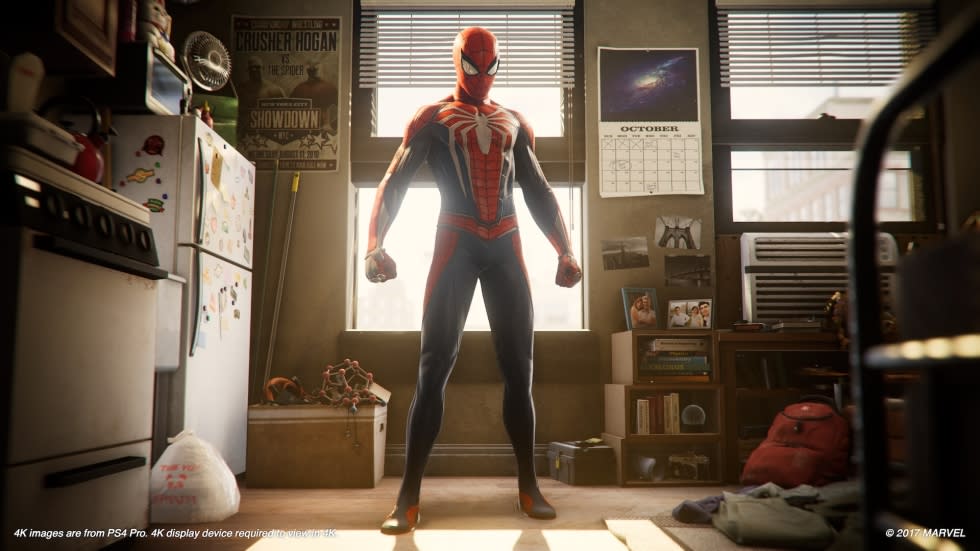 We're only a few short weeks out from swinging through New York City in Marvel's Spider-Man, but today the team at Insomniac is talking about everything you'll do after you wrap the story. Because this is a huge AAA game, of course there's a season pass with additional episodes. Collectively, they're called "City That Never Sleeps." It's a trio of add-on stories in this case, with the first, "The Heist" out October 23rd, or, a few scant days before Red Dead Redemption 2.

The first narrative follows Black Cat and adds new missions, costumes, an additional enemy faction and three suits according to the PlayStation Blog. The other two packs, "Turf Wars" and "Silver Lining," will be released in November and December, respectively. Snagging the season pass up front will set you back $24.99, or you can pick up individual episodes for $9.99 as they're released.

Unfortunately we only have episode names to go by at this point, and neither "Turf Wars" nor "Silver Lining" give up many clues. Maybe, just maybe, one will feature Venom as a way to coincide with October's Eddie Brock movie.

When I played the game at E3 a few months ago, I was blown away by just how good the web-swinging felt and how well Insomniac captured the series' tone and writing. What needed work, though, was the camera. Soaring around the Manhattan skyline felt great, but once I was on the ground or in an enclosed space constantly adjusting it was a chore. Fingers crossed that Insomniac has made some tweaks or added a lock-on system for enemies since the build I played in June.

Marvel's Spider-Man will be released exclusively on PlayStation 4 this September 7th.

In this article: business, dlc, gaming, InsomniacGames, playstation4, ps4, seasonpass, sony, spider-man, spiderman
All products recommended by Engadget are selected by our editorial team, independent of our parent company. Some of our stories include affiliate links. If you buy something through one of these links, we may earn an affiliate commission.