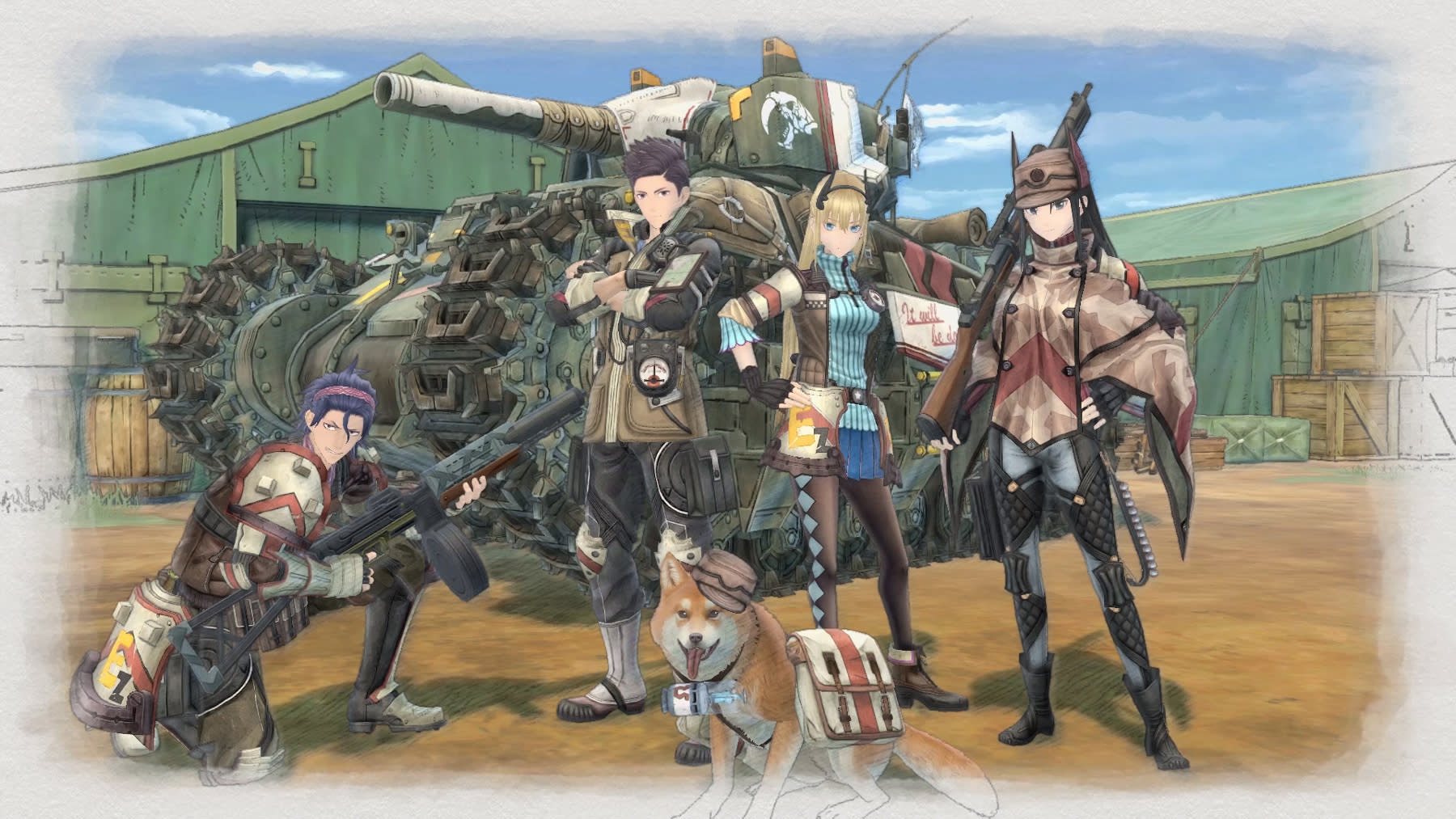 Strategy RPG 'Valkyria Chronicles 4' is a wonderful return to form

It doesn’t take many risks, but that’s okay.

For 99 percent of people, Valkyria Chronicles 4 might as well be called Valkyria Chronicles 2. The first game was a captivating war story that blended top-down strategy with third-person movement and gunplay. The second, admittedly decent title was stuck on the PlayStation Portable and the third instalment never made it to the West. Sega tried to revive the franchise last year with Valkyria Revolution, an action-focused spin-off, but it was panned by critics and fans alike. A true successor to the 2008 original has been an awfully long time coming.

Based on a two-hour PlayStation 4 demo, I can say that Valkyria Chronicles 4 delivers on that simple goal. It's not the most adventurous sequel, but it recaptures the art style and tactical complexity that made the first game such an unexpected delight.

Visually, the game looks almost identical to Valkyria Chronicles Remastered. Every scene is still presented through a charming blend of pastel colors and anime-inspired character designs. None of the assets seem sharper, or more detailed than previous entries -- but that's okay, because the series has never strived for photorealism. It's more concerned with balancing its thematic material, which oscillates between jovial camaraderie and the harrowing realities of war. The art style, with its paper vignettes and pencil-like sketch marks, accommodates the two extremes beautifully. Even now, 10 years after the original game, it feels unique and refreshing.

The campaign is structured as a book, with photos and maps denoting pivotal cutscenes and missions. The most important moments are delivered with full CG cinematics, while secondary conversations use a boxed-out, talking head format. Ideally, every line of dialog would be a free-flowing cutscene with dynamic editing and camera angles. There are plenty of smaller moments in the game, however, and I prefer to see them in this budget-friendly format than not at all. They use the same character models as the full CG cutscenes, too, which maintains a level of visual consistency across the game.

Combat in Valkyria Chronicles 4 should be equally familiar to series veterans. You start every mission in a map-like Command Mode that lets you develop a strategy and choose troops for deployment. On any given turn, you have a set number of points which are expended every time you embody a unit on the battlefield. Once selected, the perspective shifts down into a third-person Action Mode. You can then move a set distance and choose to either attack someone or use a contextual item. These secondary actions differ with each unit and include cover-destroying grenades, health-replenishing Ragnaid and tank repair kits.

The game has a small selection of troop types that offer different strengths and weaknesses on the battlefield. Scouts, for instance, can move farther than shocktroopers on a single turn, making them ideal for flanking and stealthy reconnaissance. Snipers, meanwhile, can deal damage from a distance, while lancers are effective against tanks and other forms of heavy artillery.

Nico, a scout-type soldier, lines up a shot on a rain-soaked battlefield.

The skirmishes play out on a relatively small scale. You rarely have more than 10 units on the battlefield, though protective camps allow you to quickly recall and deploy different soldiers, evolving your strategy as enemies regroup or call in reinforcements. Despite the small numbers, objectives can take up to an hour to complete. If you're savvy with your points, though, and pick the right squad composition, you can complete most missions in under 30 minutes. It's all a matter of balance -- fast attacks are useful, but push too hard and your units will likely be exposed on the enemy's turn.

During a hands-on session, I played a tutorial mission and two campaign skirmishes. The first of these was an assault on a castle protecting a war-critical Howitzer cannon. There was only one route inside, a narrow bridge that had long, tall ramparts on either side. Heavy gunners were mounted on both, and it was my job to eliminate them before carefully pushing up to the main gate. At first, I couldn't fathom how to pick them off. But then I was introduced to a new grenadier class that shoots in long, high arcs. Unlike lancers and snipers, which fire in a straight line, this meant I could pick off gunners when they ducked behind some stony cover.

The second was set in a fog-filled town overrun by the enemy. My mission was to carefully infiltrate the area and identify how many of their 'tanks' were real and fake. It was a novel premise and I enjoyed using a mixture of scouts and snipers to silently pick off enemy troops and perform reconnaissance undetected. 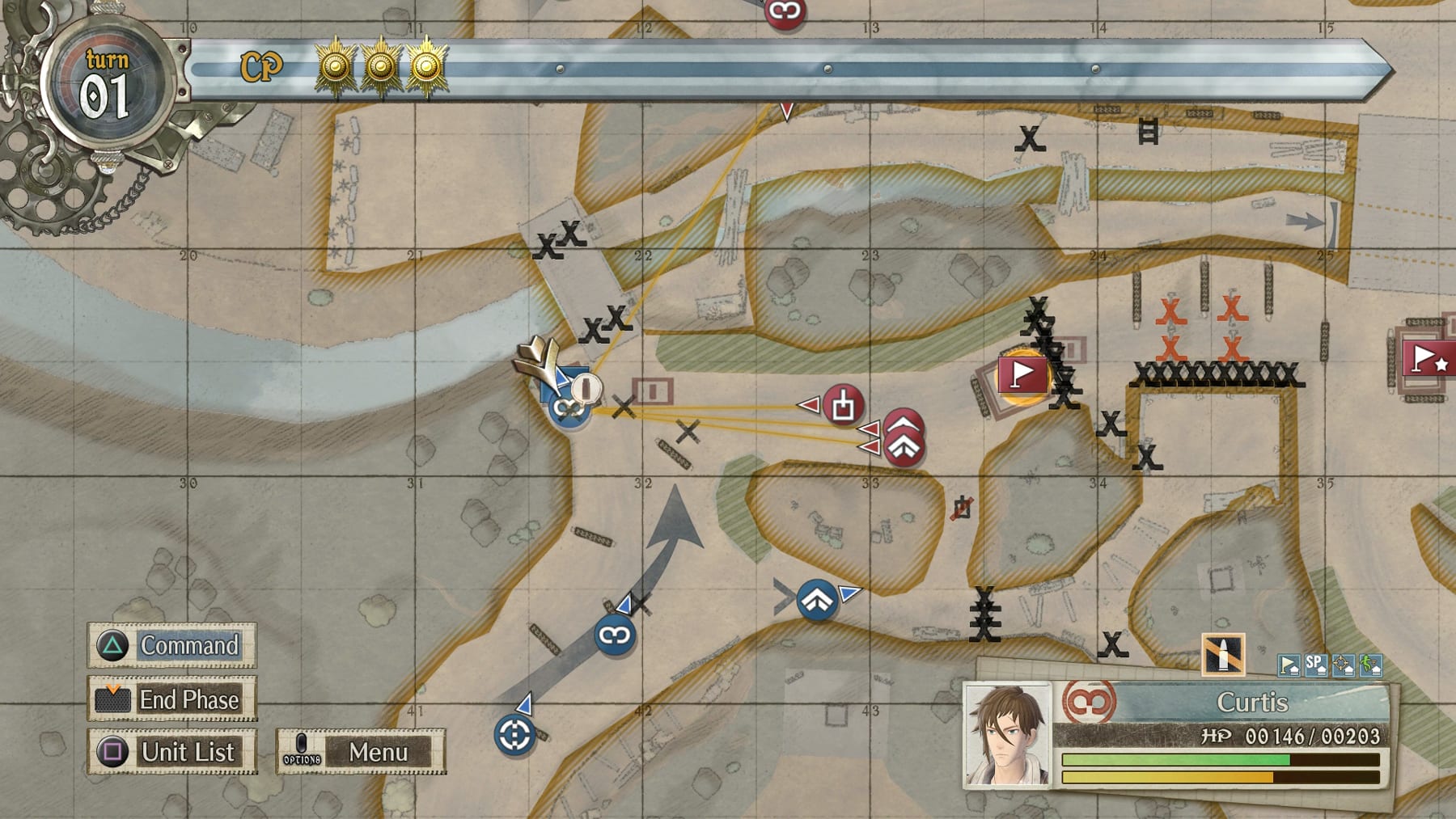 Command Mode gives you a clear overview of the map.

The Valkyria Chronicles franchise tackles a fictional war between the Atlantic Federation and the East Europan Imperial Alliance. It takes place on a continent called Europa, which yes, is basically Europe in disguise. The world map is a little different, but you can clearly make out the United Kingdom and the general shape of countries like Italy. Sometimes, this fantasy universe can feel like a bit of a cop-out; an easy way to avoid cultural backlash. It does, however, allow the development team to craft their own narrative and imaginative missions without worrying about their historical accuracy.

Valkyria Chronicles 4 is set in the same timeframe as the original game. The campaign, though, focuses on a new squad, led by commander Claude Wallace, that is pushing toward the imperial capital in the east.

Like the first game, Valkyria Chronicles 4 spends a lot of time fleshing out its core cast. At first, they seem like a group of anime cliches with one-note personalities; Raz is arrogant and keen to get into a scrap, while Kai is silent or blunt in her remarks. Over time, though, the game delves into their histories, dreams and relationships with one another. After my first mission, for instance, grenadier Riley Miller spotted Raz and Kai and instantly started reminiscing about their shared past. She then slapped Wallace in the face and said: "I can't believe I took orders from this coward."

Claude Wallace is the main protagonist and leader of Squad E.

There are slapstick moments too. Later in the demo, Raz tried unsuccessfully to flirt with a navy officer. There were plenty of jokes about the squad's ageing tank, too, and Ragnarok -- a medically trained canine sporting a lopsided hat -- is a constant delight. The game doesn't avoid the horrifying realities of war, though. At the end of my fort siege, for instance, a few imperial soldiers destroyed the howitzer, sacrificing themselves in the process. Miles, a tank engineer for the federation, later remarked: "Everyone who goes to war knows they might die. But if I was in their shoes, I don't think I could pull the trigger."

Valkyria Chronicles 4 launches on September 25th for PlayStation 4, Xbox One, PC and Nintendo Switch. The few hours that I played suggest the game isn't a grand departure or evolution of the original. For series veterans, though, that's no bad thing. Valkyria Revolution was panned because it deviated so far from the series' roots. Fans have wanted a game that sticks to the classic formula, and this sequel offers precisely that. The new characters, too, offer a fresh perspective on the war portrayed back in 2008. In many ways, it feels like a story expansion for that game, or a second season of a beloved TV show like Band of Brothers. I just hope future games are a tad more experimental in their presentation and combat systems.