LG's first hybrid smartwatch is mix of ambition and compromise

On paper, LG's Watch W7 should provide a first-class Wear OS experience and the longevity of a regular analog watch -- in other words, the best of all wearable worlds. After a bit of hands-on time here in Queens, though, I'm not sure the reality lives up to the concept's promise.

But first, the basics. The W7 has a handsome stainless body that, I'm sorry to say, will be too big for a lot of people. It looked relatively nice strapped to my wrist, but the W7 looked absolutely massive on someone's else just to my left. If you have very thin arms, you can basically write this thing off right now.

The Watch W7 runs the latest version of Google's Wear OS, and it'll take a bit of getting used to if you haven't used the operating system in a while. (The last Wear OS watch I tested in earnest was LG's Watch Sport, so this update was a pretty big deal to me.) We have a comprehensive review of all the work Google has poured into its wearable OS here so I won't rehash much of it -- that said, the improved notifications view and a smarter take on Google Assistant make the Watch W7 feel plenty valuable.

That hefty body houses a 1.2-inch LCD touchscreen, and thankfully, there are no flat tires in sight. Instead, the display has a tiny circular occlusion in the middle where the mechanical watch hands actually poke through the panel. That means scrolling through menu items and notifications will occasionally look a little weird, but hey -- there are silver-y hands taking up space in front of a touchscreen. SIfting through notifications and reading messages was always going to be a little weird.

LG did cook up a neat little work-around, though: if you press and hold the top button on the W7's right side, the watch hands will spin around the dial until they're in the 3:15 position and the image on-screen scoots up a bit. It's impressive because of the mechanics involved, but it does make clear a concession that wouldn't have to exist if these hands weren't here in the first place. 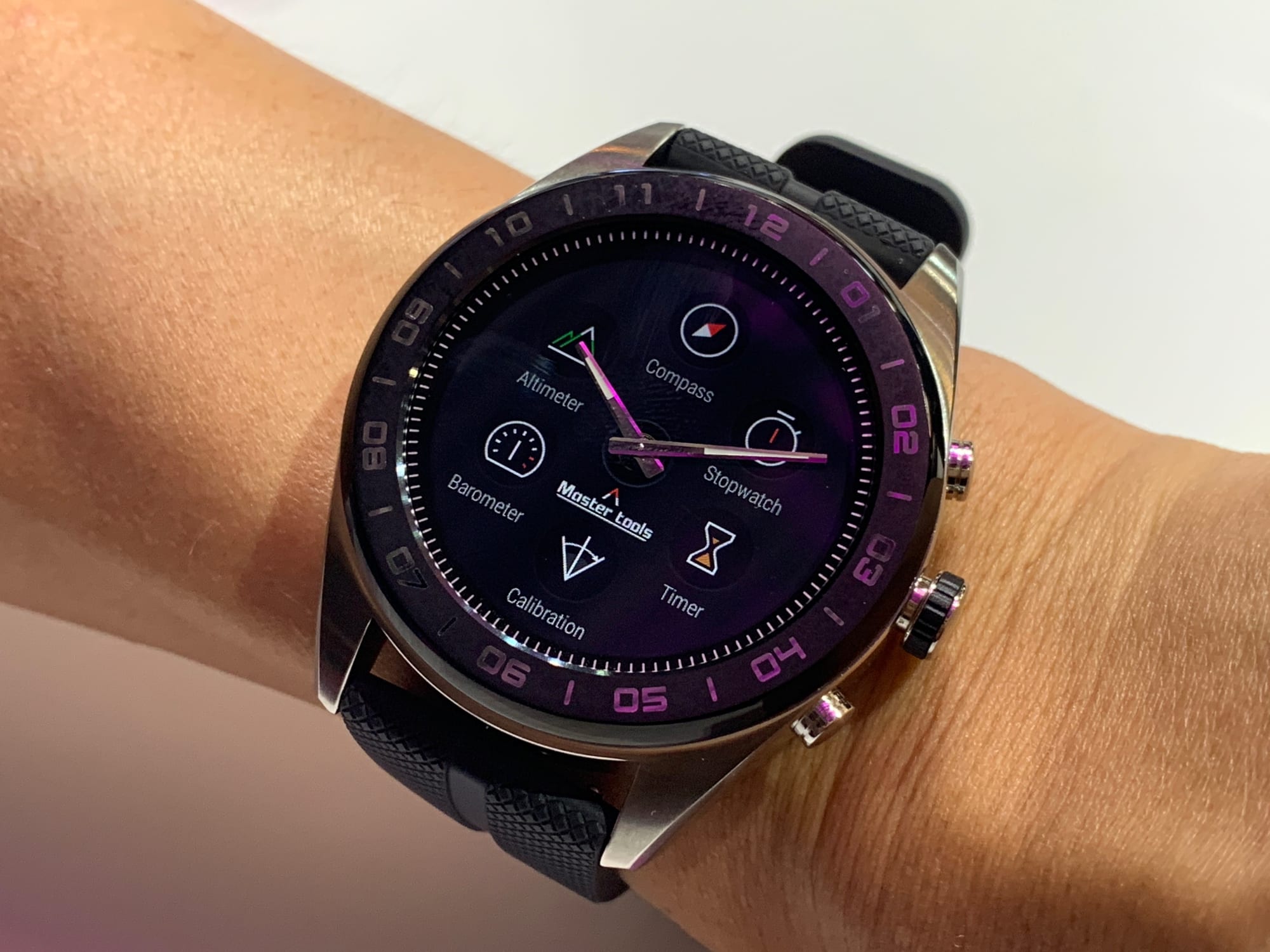 LG sought to add to that value with what it calls Master Tools. Long story short, they're a handful of apps that use the W7's mechanical hands in some interesting ways. Easily the most impressive I tested was a compass that made the watch's hands spin around to point the way north. If that doesn't appeal, there's also an altimeter and a barometer, though I couldn't actually get them to work. If nothing else, though, I could watch the stopwatch feature work all day. For a watch that seems more concerned with style than backwoods functionality, some of these seem like pretty odd addition. Apparently, to embrace the Watch W7 is to embrace a certain degree of absurdity.

Oh, and here's something that didn't quite click for me before I saw the W7: it doesn't have a heart rate sensor built into its stainless steel back. Given how popular fitness wearables are and just how ubiquitous heart rate monitors are now, this feels like a pretty glaring omission. LG wouldn't confirm my hunch, but I have to imagine the issue here is size -- the mechanics that keep a watch's hands ticking probably take up a non-trivial amount of space inside this body, and I wouldn't be surprised if the company decided to axe heartbeat tracking in favor of being able to tell the time.

All told, the Watch W7 leaves me a little confused. The ability to tell time well after the watch's battery goes dark is truly valuable, but my limited hands-on time left me with the impression that mechanical hands on a smartwatch are sometimes more trouble than their worth. That might change over time, though: we're going to put this thing through the review wringer soon, and maybe that process will turn up something I missed so far.

All products recommended by Engadget are selected by our editorial team, independent of our parent company. Some of our stories include affiliate links. If you buy something through one of these links, we may earn an affiliate commission. All prices are correct at the time of publishing.
LG's first hybrid smartwatch is mix of ambition and compromise
gear
hands-on
lg
smartwatch
watchw7
wearables