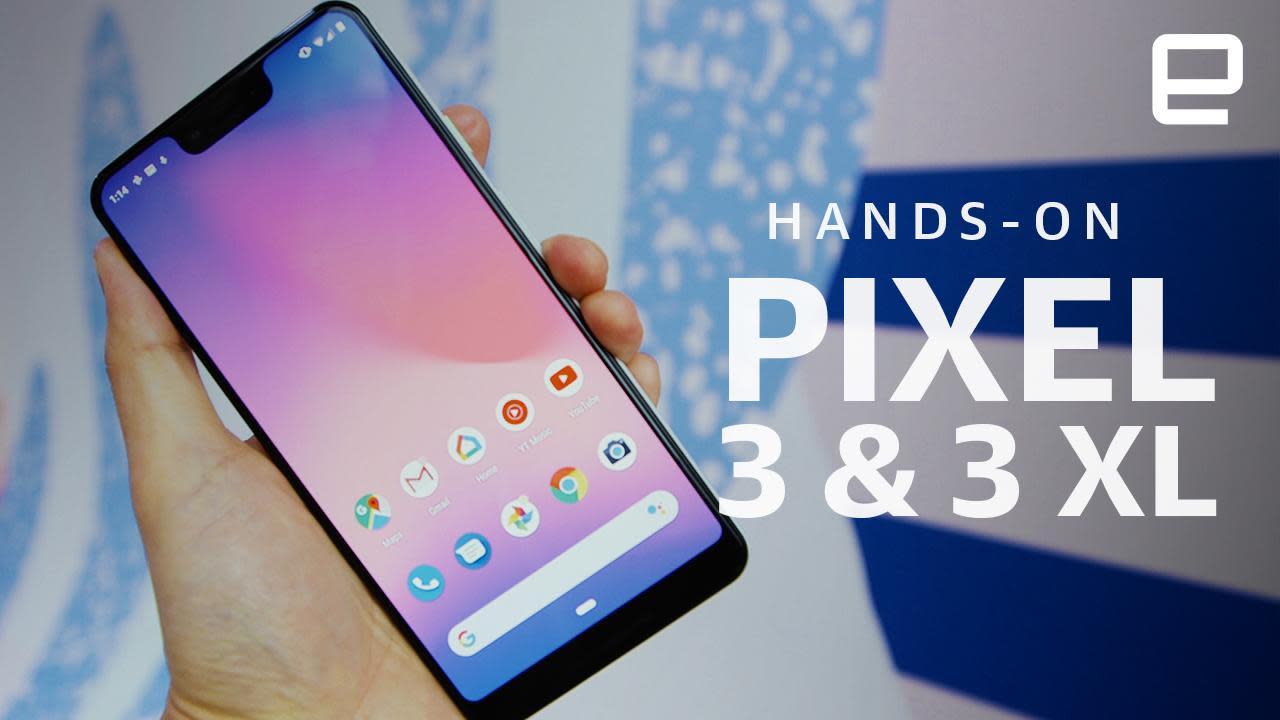 We technically already spent some time with the Pixel 3 XL outside a dinky electronics store in Hong Kong, but this is one of the most important phones of the year. So it definitely deserves a little more scrutiny. Thankfully, Google's presentation here in New York has just wound down, so it's time to take a closer look at what the company has managed to pull off this year.

I already know what some of you are probably thinking: Can a phone that has been leaked this thoroughly actually offer any surprises? Well, maybe not. What has been surprising, though, is just how complete and competent the 3 XL feels despite the fact that Google mostly played it safe with this generation of hardware. By now the Pixel 3 XL's basics are well understood: In addition to that notched, 6.3-inch OLED display, there's a Snapdragon 845 with 4GB of RAM inside. You'd be right to think that sounds a little light compared to other flagship phones we've tested this year, but that hasn't stopped the 3 XL from running remarkably quickly. Based on our limited hands-on time, it's as smooth and fluid a smartphone as I've played with this year, even after I fired up every app I could and generally tried to throw the phone for a loop. To be clear, 4GB of RAM is perfectly fine for modern smartphones, but I have to wonder how well the 3 and 3 XL will age as a result.

So far, so good, though. It's worth pointing out that the Pixels have some extra, handy silicon. Most notably, there's the upgraded Pixel visual core here, which handles a lot of the image recognition and photo trickery that would normally require more RAM. It probably doesn't hurt that this generation of Pixels runs Android 9 Pie, which is (in my estimation, at least) the best version of Google's mobile OS to ship in awhile. I've noticed a slight lift in performance on devices I've recently updated to Pie, so it probably isn't a surprise that the Pixel 3 XL runs as well as it does -- either way, you shouldn't be too concerned about Google's latest hardware limping compared to the competition.

You'll be glad to know the screen situation has also improved dramatically since last year too. At launch, the Pixel 2 XL suffered from a handful of unfortunate quirks: First the color saturation was a little off compared to the competition. Because of the way LG manufactured its screens early on, some "grit" was apparent in certain conditions. Plus the blue shift that came with viewing the display at an angle was especially pronounced. Not so this time! The notch that cuts into the screen is bigger than I'd prefer -- to accommodate those dual front-facing cameras, of course -- but the actual quality of the screen leaves me without complaints. Then again, my own Pixel 2 XL screen wasn't nearly as bad as others I saw (or heard about), so this year's upgrade will make some of you much happier than others.

Oh, and those of you curious about this new sand/pink colorway are in for a treat. It was the first 3 XL I took for a spin when I ran into the maelstrom that is Google's demo area, and it's both subtle and undeniably rosy. Your mileage may vary, but I actually love it. The build quality seems quite a bit better this year too: The 2 XL was put together pretty nicely, but the 3 XL's curves melt almost seamlessly into the two-tone, multi-finish glass back. Older Pixels always felt quite nice, but this year's Pixels feel great.

Purely in terms of hardware, the Pixel 3 XL is a little underwhelming. It's not bad by any stretch, but it doesn't seem to have aspired to much more than the expensive smartphone norm. That said, there are some new additions here like a Titan Security chip, which aims to help lock down all the sensitive information you store on your smartphone, but it's hard to get a feel for what that really does during some hands-on time. As you'd expect from Google, though, most of the breakthroughs here are in the camera, though one of the biggest new photo features isn't quite finished yet.

We've seen super-low-light modes before (perhaps most notably in Huawei's P20 Pro), but based off the sample images Google has provided, the Pixel 3 and 3 XL just might be the near-dark shooters to beat. Too bad this feature won't be available to Pixel users until after the phones launch. Meanwhile, the new Top Shot feature generally does a fine job of figuring out when you're blinking or otherwise ruining a photo, though I didn't manage to trip it up by blinking a bit too quickly. (Sometimes things get in your eyes!) Overall, though, if you prefer shooting motion photos as opposed to standard RAW or JPEG stills, Top Shot is a huge help.

Having Google Lens baked directly into the viewfinder is really helpful, too, though you'll still need to switch into a specific Google Lens shooting mode to get the full effect. If you point the camera at, say, a QR code, though, the phone recognizes what it's looking at and offers a handy link. While it isn't always the best at matching what it sees to what's on the web, Google Lens can sometimes be a genuinely helpful tool, and it's great to see Google making it a little easier to use.

The Pixel experience is made better by the fact that Android 9 Pie is augmented by features by Call Screen, which basically helps Google Assistant turn away phone spammers and scammers. Of all the features Google announced today, this one probably earned the most enthusiastic response from the collected coterie of techies. It's flourishes like this -- ones we didn't even think to ask for -- that most thoroughly prove what Google is trying to achieve with the Pixels. The hardware is fine for a flagship, but for now at least, Google's software seems more than capable of pushing these Pixels to the top of the Android heap.

In this article: android, android9, gear, google, googlepixel, hands-on, mobile, pixel3, pixel3event, pixel3xl, smartphone
All products recommended by Engadget are selected by our editorial team, independent of our parent company. Some of our stories include affiliate links. If you buy something through one of these links, we may earn an affiliate commission.