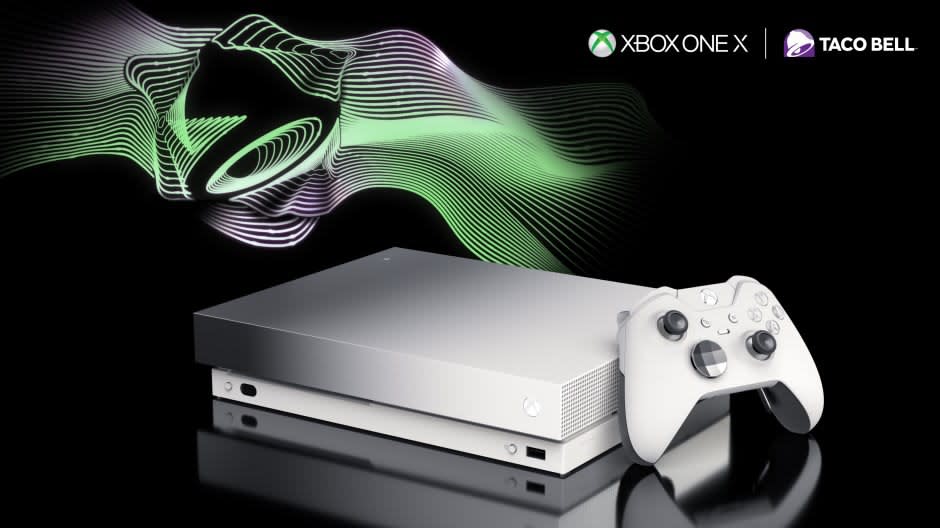 Most gamers have had at least one Taco Bell-infused gaming session, but but Microsoft's latest promotion takes things to the extreme. Microsoft is teaming up with the fast food joint to give away limited edition Taco Bell-themed Xbox One X consoles that make the Taco Bell "ring" sound when powered on.

Starting October 18, every $5 double chalupa box you buy from Taco Bell will give you a code that can be used to enter for a chance to win one of the custom gaming rigs. Microsoft and Taco Bell are giving away one of the consoles every 10 minutes between October 18 and November 22, which works out to just over 5,000 consoles that you could eat your way to.

Before you terrorize your body with double chalupa box after double chalupa box in the hopes of scoring an Xbox with native advertising for Taco Bell built into it, you should know there is a limit on the number of entries you get. You can only submit up to 32 codes per person.

In addition to making the "bong" sound from Taco Bell commercials, the console will also sport an exclusive gradient theme exclusive to the promotion. (Sony once offered a similarly limited gold-skinned PS4 that was also part of a Taco Bell giveaway.) It also comes bundled with an Xbox Elite controller, three months of Xbox Game Pass and Xbox Live Gold. Xbox One X bundles usually retail for more than $500, so wolfing down a $5 meal from Taco Bell is a small price to pay for a shot at one.

In this article: gadgetry, gadgets, gaming, giveaway, home, LimitedEdition, microsoft, TacoBell, xboxonex
All products recommended by Engadget are selected by our editorial team, independent of our parent company. Some of our stories include affiliate links. If you buy something through one of these links, we may earn an affiliate commission.