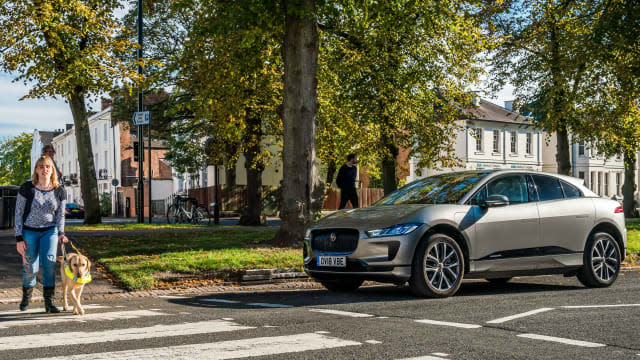 Jaguar's I-Pace is just getting into consumer's hands, and now the EPA has officially released its range estimates for the all-electric SUV. The vehicle has a range of 234 miles from its 90kWh battery pack, according to the EPA's tests. And compared to its all-electric competition, this range-to-kilowatt ratio is not great. But most people don't compare the I-Pace to the tiny Nissan Leaf, rather its main rival is the Tesla Model X.

Both the base Model X and I-Pace have similar ranges, but Tesla does so on a much smaller battery. The Model X 75D gets 237 miles on a 75 kWh battery, and when translated into the EPA's MPGe (miles per gallon equivalent), Tesla sits comfortably at a 93 combined MPGe rating, much higher than Jaguar's 76. The upcoming Hyundai Kona, a cross-utility vehicle similar to the Model X, gets 258 miles from a 64kWh battery.

The differences in range can have a bit to do with performance metrics. Jaguar flaunts a 0-60 time of 4.5-seconds. When compared to the Model X's 4.9-seconds, it's a modest jump. And that uptick in performance can be felt on the track, as was noticed in our favorable review of the I-Pace. But the more likely culprit is research and development. Tesla has been in the electric game a lot longer than Jaguar, and has developed efficiencies that surpass many of its rivals in both range and performance.

Jaguar still has Tesla beat in the luxury game. While the interior of the Model X -- and its gullwing doors -- look futuristic, the interior -- as per our comparison -- outclasses Tesla. And considering the I-Pace starts at $69,500, exactly $10,000 cheaper than the base Model X, longtime fans of European SUVs might stick with Jaguar.

In this article: electric, epa, gadgetry, gadgets, gear, green, i-pace, ipace, jaguar, modelx, mpge, range, tesla, transportation
All products recommended by Engadget are selected by our editorial team, independent of our parent company. Some of our stories include affiliate links. If you buy something through one of these links, we may earn an affiliate commission.