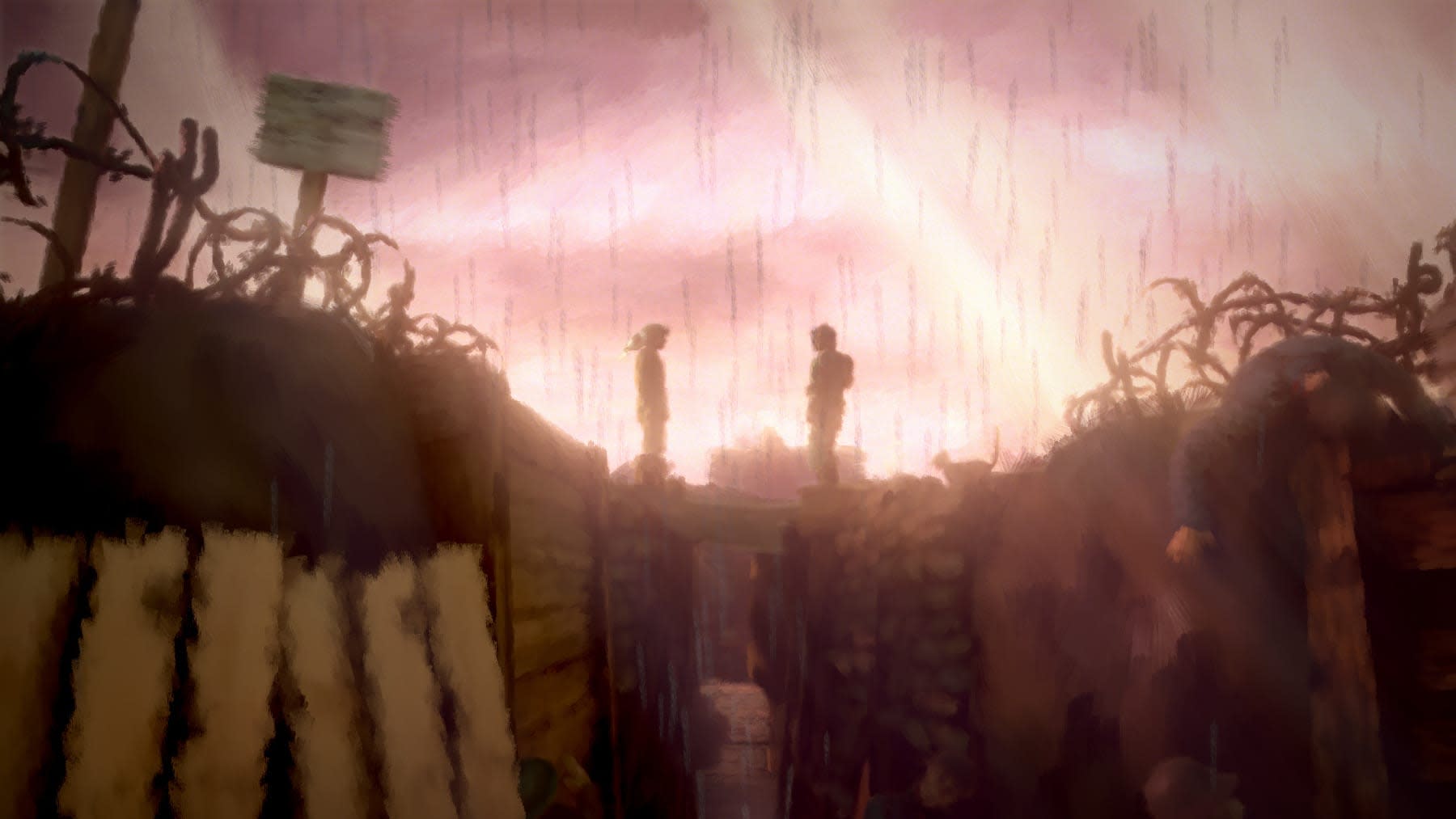 How Aardman made a WWI game look like an oil painting

Behind the divisive art of ‘11-11: Memories Retold’

Most video games set in the First or Second World War shoot for gritty realism. In Battlefield 1, for instance, there's an extraordinary amount of detail in every uniform, firearm and mud-filled trench. It's the visual fidelity, paired with addictive combat, that draws players in.

11-11: Memories Retold is different. The story-driven experience, set during the last two years of World War I, has a painterly art style inspired by artists such as Claude Monet and Joseph Mallord William Turner. Every scene is created with tiny brushstrokes that slowly move, transform and dissolve. As you move the twin protagonists forward, the paint will change again to reflect your position in the level. If you're standing on a street in Paris, for instance, the building at the end might be represented with a single dab of paint. Move closer, however, and it will become a larger object composed of many more strokes.

It's almost as if the scene is being constantly repainted around you.

The visuals are dreamlike and impressionistic. They're also hugely divisive -- some think the style is beautiful, while others believe it's too "blurry" or looks like someone has smeared Vaseline everywhere. The game's creators knew it would be controversial. Yoan Fanise, the director on 11-11: Memories Retold, told Engadget: "I prefer that people like or don't like it, rather than doing something in the middle that nobody cares about. 'Okay, it's not beautiful or awful, but I just don't care.' I prefer to have something strong, with color, that people will either love or hate."

Fanise is the co-founder of DigixArt Studio, a French company that made a rhythm game for mobile devices called Lost in Harmony. He's best known for his sound design work at Ubisoft, however, which included Beyond Good & Evil, Assassin's Creed III and Valiant Hearts: The Great War.

DigixArt partnered with with Aardman Animations, the studio behind some of the most iconic and beloved stop-motion movies, such as Wallace and Gromit, Chicken Run and Early Man, to develop the distinctive art style. The company, based in Bristol, in southwest England, set up a web department many years ago to work on websites like shaunthesheep.com. Some of the team's original members loved video games and, within a few months, were working on projects for external clients such as Disney and Nickelodeon.

"I felt that we just had to use this kind of rendering and technique."

The web department is now called the interactive team. It has produced smaller games such as Home Sheep Home 2, but nothing on the scale of 11-11: Memories Retold.

Fanise met Jake Manion, then creative director for Aardman Animations, at a Games for Change festival in 2016. Manion asked about Valiant Hearts: The Great War, an award-winning puzzle game inspired by letters that were written during World War I, and whether Fanise had anything planned for the armistice centenary in 2018. The French director had, by chance, been thinking about a game with a painterly style similar to Loving Vincent, a biopic animated in the style of Vincent van Gogh's legendary artwork. "Loving Vincent wasn't out yet," Fanise recalled, "but there was a teaser. I felt that we just had to use this kind of rendering and technique."

Manion was intrigued and asked Fanise to visit the Aardman Animations studio in Bristol. The team showed Fanise many projects, including a painterly short called Flight of the Stories, which had been commissioned by the UK's Imperial War Museums. "He looked at that and was like 'That's it. That's what the game should look like,'" Dan Efergan, creative director of digital at Aardman Animations, told Engadget.

The two companies spent a year sending emails and concept art back and forth. Eventually, Japanese publisher Bandai Namco met Fanise and invited him to pitch the project. He immediately called Efergan and explained that the company would be visiting Aardman in two weeks. "I then had to go and admit to my boss that we had been spending the last year trying to get this project off the ground," Efergan said.

The project was quickly green-lit with a hard deadline: November 11, 2018, exactly 100 years after the end of World War I.

Bram Ttwheam, the art director on 11-11: Memories Retold, had only been involved "on the fringes" of Flight of the Stories. He was keenly aware, however, of the processing power that had been required to render each frame. "I thought, 'Fuck, how are we going to do this as a real-time thing?'" he told Engadget.

"We basically had to teach the computer how to paint. Which is really bloody hard."

Ttwheam was keen to make the game with a sharp, cut-out aesthetic inspired by modernism, an art movement heavily influenced by World War I. He was worried, though, that the visuals would be too similar to the hundreds of "low poly" video games that were popular at the time. So he switched to a softer style inspired by artists such as Turner and Monet. Ttwheam was also influenced by Alexander Petrov, a Russian animator who in 1999 made a 20-minute movie called "The Old Man and the Sea," with more than 29,000 glass-painted frames.

Re-creating that style in a video game was difficult, however. Alexander Birke, the graphics programmer for 11-11: Memories Retold, made a "painterly render pipeline" to control the effect. "We basically had to teach the computer how to paint," Efergan said, "which is really bloody hard."

Underneath every level was a traditional scene with 3D models. While this frame was rendered, a separate image, or layer, was created that contained values and other relevant information for the painterly effect to pull from. These included the size, type and direction of each brushstroke. The pipeline then added the paint "particles" based on the level of detail that was required in the scene and the movement speed of each brushstroke. Finally, the particles were blended into the original image using a depth-based algorithm that ensures foreground objects are never obscured by brushstrokes depicting elements in the background.

Efergan explained: "You take 3D information, behind the scenes, of where things are and where the light is bouncing off stuff. Then ultimately flatten it into a 2D process. You are painting on top of 3D information as quickly as possible to make it a 2D thing."

Birke developed custom tools so the team could control the effect at three different levels. The first was a "global" set of sliders that defined the overall look, such as the minimum and maximum stroke size and how long each stroke should exist onscreen. The second set allowed artists to finesse the effect on a per-model basis, while the last controlled individual textures, such as skin and clothing, to ensure they could be treated differently on the same model. "It's quite a tricky thing," Ttwheam explained, "because we're rendering the scene in three dimensions, beneath what you actually see, and using all that information to inform where we place the [painterly] particles on the 2D surface of the screen."

At the start of development, the game looked downright terrible. "There were moments that you could go, 'This could be really beautiful,' but that was a few percent, five percent at most," Efergan said. "Ninety-five percent of it was this big, ugly, messy lump. You couldn't see what was going on."

Some objects needed detail or emphasis to show they could be interacted with.

The team was trying to balance beauty with the definition and detail required to naturally explore and complete each level. In one sequence, for instance, you have to pull a large lever in a zeppelin factory. By default, the pipeline would depict it with a single brushstroke if you stood on the opposite side of the room. That made it pretty but nearly impossible to find unless you wandered over by accident. Some objects, therefore, needed detail or emphasis to show they could be interacted with. "We could pick out certain bits of geometry, or collections of geometry, and say, 'Oh, we need this bit to be smaller brushstrokes,'" Ttwheam said. "If we wanted people to look at it we could also have the brushstrokes move slightly quicker than all the surrounding brushstrokes so it catches the eye."

The simulated particles would also flicker, or behave unnaturally, if the assets were too detailed. (Developers call this Z-fighting.) The team learned that reducing the quality of the underlying models stabilized the painterly effect and, in many cases, gave the scene a cleaner, simpler look. "The [painterly] particles are rendered above the [models] to something you might expect to see in a PlayStation One or Two game," Ttwheam said. "Because you never actually see them in that state. It's the particles that you see on top, and those are a much higher resolution."

The improvements didn't come at a steady pace, either. 11-11: Memories Retold, like many movies and video games, came together only in the final months of production. "It just suddenly went, 'Oh, good, okay, we're not going to crash into the side of the mountain. We're just going to pull over the top of it,'" Efergan recalls with a chuckle.

The art style is more than a gimmick. It also serves the story, which follows two soldiers -- a technician called Kurt and a photographer named Harry -- on opposing sides of the war. The pair enlist with (mostly) good intentions and do their best to protect the people around them. They eventually cross paths and are faced with a difficult choice: help each other or respect the greater war effort?

I won't spoil the ending, but I will say this: the game is about perspective and how different people interpret the same event. The art style also forces you to interpret the war. The soft edges and symbolic swaths of color match the messy, chaotic and often morally gray aspects of the conflict. It's on you to make sense of it all or accept that it's impossible to fully comprehend what happened.

The colorful imperfections also give 11-11: Memories Retold an old, artifact feel. It's a video game, of course, but the story often feels like a series of drawings, or paintings, that have been dug up and stitched together to form an amateur movie. The found-footage style matches the game's educational slant, too. It's entertaining, yes, but in the same way that Band of Brothers, Dunkirk and Saving Private Ryan are. 11-11: Memories Retold is more concerned with historical accuracy and honestly portraying the horrors of war than with fulfilling any kind of power fantasy.

Ultimately, the game is an experiment. It's not designed to replace Battlefield 1 or other, more conventional military shooters. The painterly style isn't for everyone, but it shows what's possible when a company like Aardman -- a studio with little experience in the video game industry -- is given the chance to create something truly different.

Aardman used thicker strokes for motion blur and dazed vision.
Harry, a Canadian photographer, visits Paris partway through the game.
Harry enlists to impress his crush and childhood friend, Julia.
Kurt, a loving father and technician, has a farm in rural Germany.
All products recommended by Engadget are selected by our editorial team, independent of our parent company. Some of our stories include affiliate links. If you buy something through one of these links, we may earn an affiliate commission.