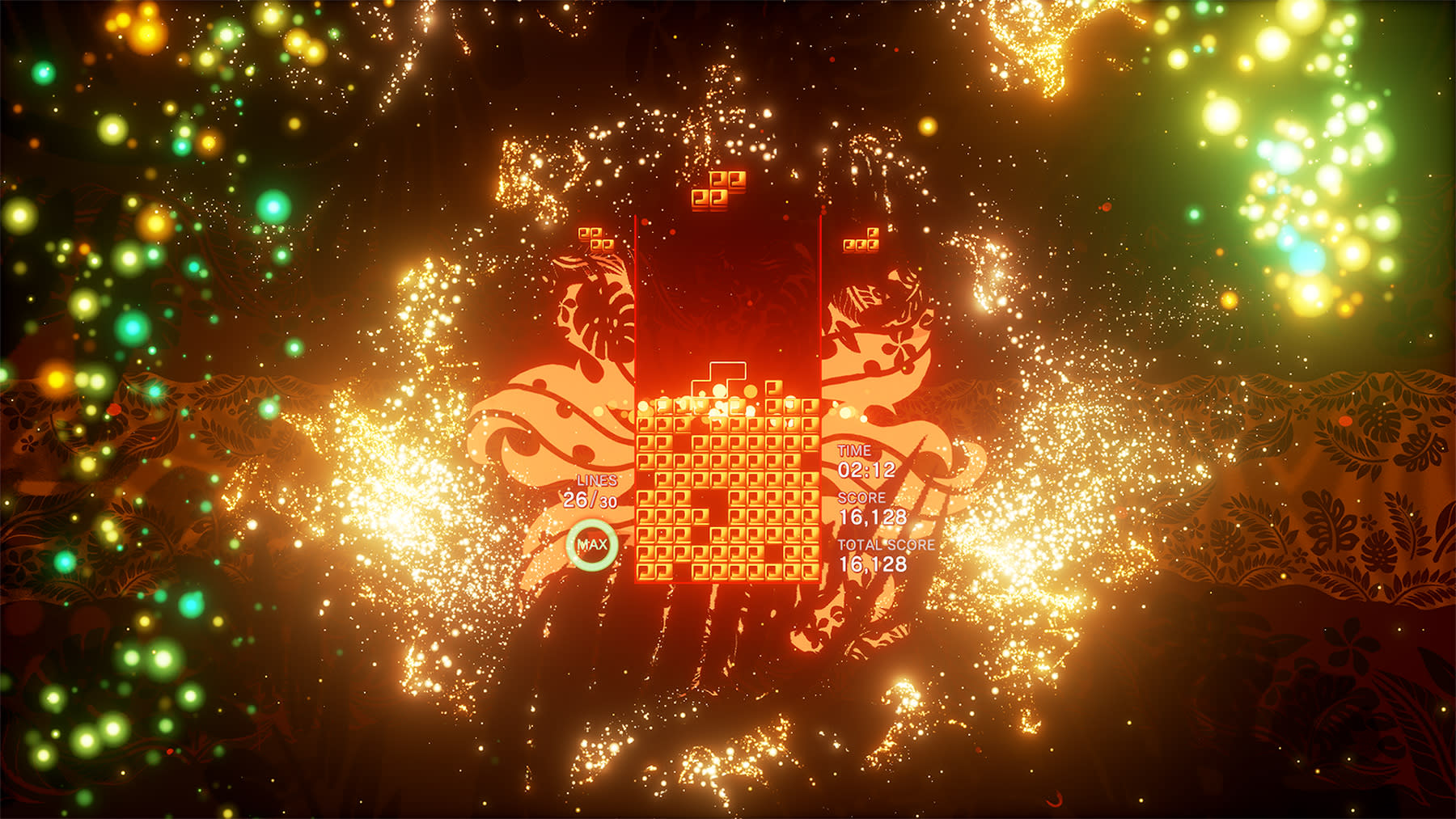 Can a video game be more than just a game? Can it train you to focus? To disassociate yourself from traumatic memories and heal your mind? Can it transcend your personal experience and bridge a geopolitical divide? These aren't just ridiculous claims from a marketer's fever dream -- one video game has done all of this before, reaching hundreds of millions of players: Tetris. And it's back again, just when the world needs it most.

Tetris Effect is more than the latest iteration of the classic puzzle game. The Playstation 4 exclusive promises something deeper than simple block-falling puzzle gameplay. Tetris Effect is designed as a synesthesia of animation, music and gameplay. Tetris plays out just like you remember it, but as blocks fall into place and you clear lines, the music syncs to your game. As you achieve combos of multiple lines cleared at once, particle effects and animations such as dolphins and jellyfish leap from behind the screen and dance across the board. This is familiar stuff to fans of Tetris Effect producer Tetsuya Mizuguchi, who also created the music rhythm games Rez, Lumines and Child of Eden.

The term "Tetris effect" refers broadly to a mental phenomenon where you have devoted so much concentration and time to a task that you begin to see ghostly vestiges of it everywhere. Tetris players are especially prone to this effect: objects in the real world -- cars, laundry, groceries -- seem to be able to fit together like tetrominoes, and falling blocks haunt the periphery of your imagination as you drift off to sleep. In one study -- as the moving trailer for the Tetris Effect game attests -- after play sessions, images of falling blocks haunted patients who suffered from amnesia and otherwise had no recollection of playing the game. The researchers in this study, from the Laboratory of Neurophysiology at the Harvard Medical School, suggest that Tetris memories are a different kind of memory altogether, akin to procedural memory.

While some of this doesn't sound particularly uplifting -- being haunted by rows of falling tetrominoes when you have no idea where they came from sounds like a Cronenberg nightmare -- the "Tetris effect" can also be interpreted as the after-effects of a prolonged "flow" state, a period of great concentration where distractions melt away and you become entirely absorbed in the task at hand. In other words, everything just falls into place. The achievement of a flow state has been a bit in vogue recently, thanks to the "mindfulness" movement, and why wouldn't it be? At a time when our phones have become corporate weapons of profit-driven distraction, and the news cycle threatens to plunge you into despair with every incoming alert, it's only natural that the collective desire for "flow" would increase.

There are dozens and dozens of self-appointed mindfulness geeks on YouTube who will walk you through tutorials to achieve flow states. Or you can turn to Tetris Effect, which contains a game mechanic called "Zone." As you clear lines in the Tetris matrix, it charges your Zone meter. When you release Zone, time freezes, giving you the opportunity to quickly disappear line after line of blocks. If you clear 16 lines in a row during one of these Zones, you will have achieved a "decahexatris," which is the ultimate play in Tetris Effect.

Researchers suggest Tetris play can be used to alleviate traumatic flashback memories when they occur.

Though the decahexatris is the holy grail players are searching for when they enter Zone, not everyone will achieve it. But what everyone will get out of entering Zone is a powerful taste at the elusive flow state. In this sense, Tetris Effect becomes an effective tool to hone your concentration -- you can enter Zone/Flow only after clearing several lines, which means you need to build up your concentration, which then gets rewarded with a mechanic where everything starts clicking into place. The game leads you here with a gentle hand. You can restart levels quickly and easily. Progress is steady and rewarding. The game wants you to improve, it wants you to find your flow. It wants you to train and flex your mental muscles.

Tetris has long been used as a psychological tool, since the very first years of its inception at the Dorodnitsyn Computing Center in Moscow in 1984. One of the first people to play the game was psychologist Vladimir Pokhilko, who recognized it immediately as a potential aid in his studies of addiction. More recently, researchers from Oxford University and the Karolinska Institute in Sweden have found that playing Tetris after a traumatic event creates a dissociative state that prevents the formation of memories that could lead to PTSD. They suggest putting Tetris in emergency rooms to help patients turn off their active minds while awaiting treatment. Researchers also suggest that Tetris play can be used to alleviate traumatic flashback memories when they occur. This therapeutic power to heal broken minds may apply to other visually demanding games, but it seems uniquely applicable to Tetris, where the premise of the game is to bring order out of chaos and make things fit properly. And perhaps this has something to do with those Tetris memories being a different kind of memory.

The healing qualities of Tetris are ingrained not just in the gameplay, but in Tetris' origin story as well. Created by Soviet programmer Alexey Pajitnov in the aforementioned Dorodnitsyn Computing Center, it was initially an after-hours outlet for his creative energies after a long day devising machine-learning and surveillance tools for use by the Soviet security apparatus. Tetris was a lightning bolt of creativity that spread quickly from the drab gray laboratory across all of the USSR, and then out from behind the Iron Curtain via a group of craven Western businessmen who made a mess of the licensing, which they had to spend a decade sorting out. But it got out, and it made a leap between global superpowers at a time of unprecedented tension.

Despite its entanglement between Soviet-style communism and American-style capitalism,Tetris became a pure and unadulterated joy, a transcendent piece of software that anyone could pick up and instantly grasp. The game has been totally untainted by all of the negative video game stigma -- it is not built on bigoted assumptions and does not depend on abstracted violence. It's available today on practically every electronic machine with inputs and has seeped into every culture on the planet as a universal good we can all agree on. It was no coincidence that when Hillary Clinton's 2016 campaign had to humanize her, it released an image of her playing a Gameboy in 1993, on which she is almost certainly playing Tetris (she's a reported fan of the game).

Tetris Effect is the most perfect expression of the game to date. It is a synesthesia of music, gameplay, visuals, and haptic feedback via the Dualshock 4 controller that melds your mind into the Tetris matrix. Modes allow you to customize your gameplay: if you want a classic Tetris experience, you can turn down all of the effects and focus only on the matrix. You can remove fail states entirely in "Relax" mode, or you can amp up your mental dexterity in "Adventurous" and "Flow" modes, which make you solve puzzles or play the game in novel ways, such as upside down. The game has also been built for Playstation VR, for those who want to take the synesthetic to the next level and put their face inches from the Tetris actions -- it is also the most accurate way to play, as the latency in PSVR is extremely low compared with the non-VR experience.

As I got further into Tetris Effect, the music began to soar. The chillwave vocals warble about everyone being connected. And indeed, everything starts to fit. The tetrominoes fall and fill my matrix, and I clear them, and then they fall again. My worries melt away. All thoughts melt away. It's manipulative, yes, but that's the point here: To stir your emotions with synesthetic art; to distance yourself from the demands of your active mind; to inoculate you against the chaos of the 24-hour news cycle and to help you find your flow state, where everything has its place. If nothing else, Tetris Effect is a state of mind.

All products recommended by Engadget are selected by our editorial team, independent of our parent company. Some of our stories include affiliate links. If you buy something through one of these links, we may earn an affiliate commission. All prices are correct at the time of publishing.
View All Comments
‘Tetris Effect’ is therapy for distracted, anxious minds