And it's surprisingly chill.

Insomniac Games, a studio that's built up a reputation for action-packed games and bold VR experiences, wants you to take care of a plant. It's not just any plant, though. In Seedling, the company's first Magic Leap experience, you're tasked with taking care of alien vegetation. By doing so for a few minutes every day, you help to repopulate the galaxy after a mysterious event wiped out every trace of life outside of Earth. There aren't any blasters or space battles in Seedling -- just the joy of nurturing what's effectively an alien bonsai tree in augmented reality. 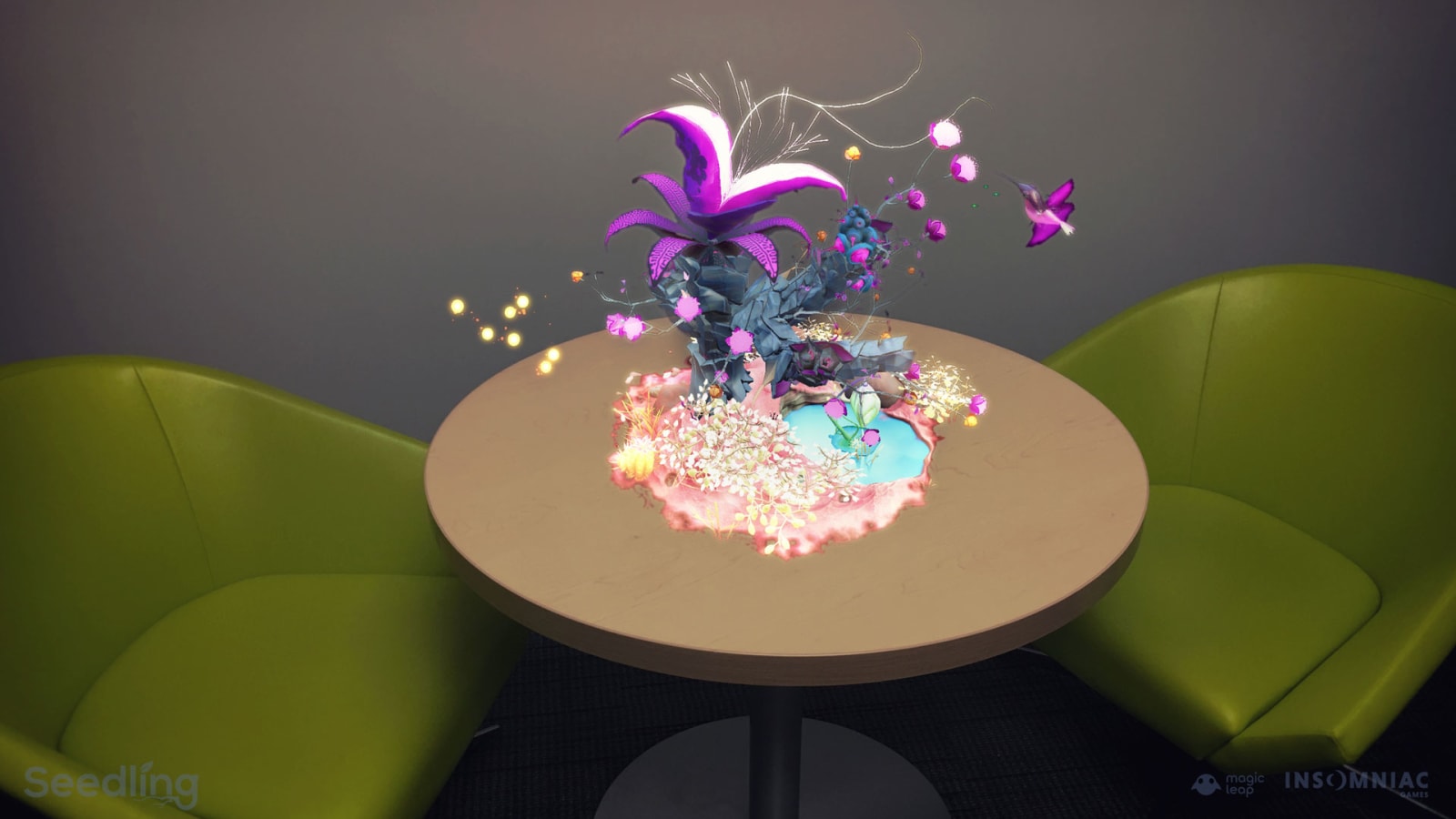 Much like Nintendo's wildly popular Animal Crossing games, you're not going to be spending hours on end with your Seedling. Instead, you're meant to check in for 15 minutes or so every day to make sure its growing properly, well fed and free of pests. It's less a game and more of a meditative experience. And based on the bit I've played, it's a glimpse at how augmented reality could worm its way into our lives in ways VR hasn't.

I got my first look at Seedling in the basement of the National Geographic Encounter in Times Square, a destination for kids and families to experience all sorts nature exhibits. It only seemed fitting for my alien AR encounter. After holstering the Lightpack onto my pocket, I donned the Magic Leap One and stared an empty table. Within a few seconds, a virtual book materialized in front of me laying out the plot of the game. It's a cute introduction to the world, but the pinching gesture for turning the page didn't always work properly. I chalked it up to early software I was playing, but it made me concerned about Magic Leap's ability to properly register finger gestures. 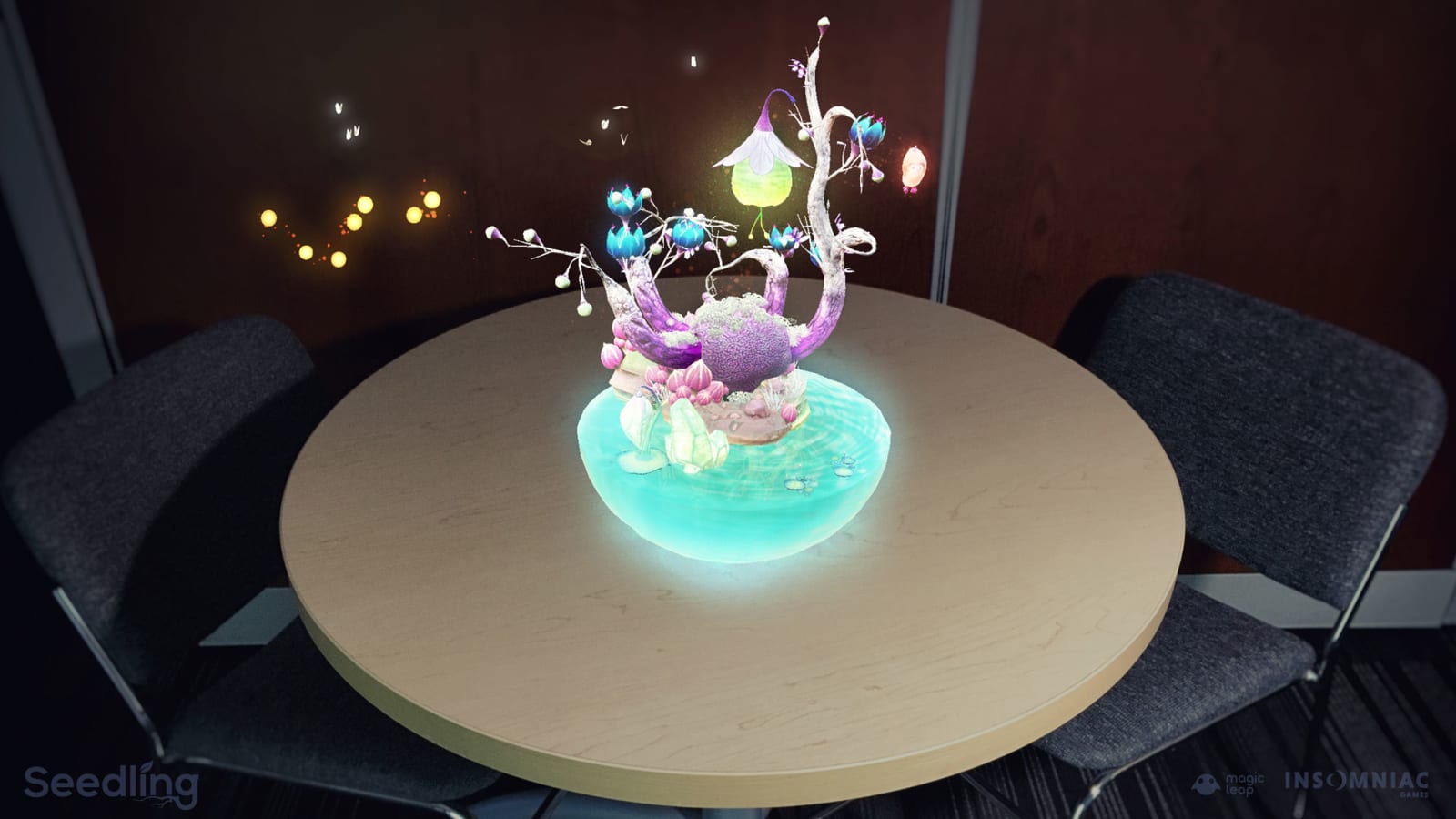 Once I fumbled through the book, I was confronted with the reason I braved Times Square on a weekday morning: A truly weird looking plant. Alien really is the only way to describe it, with its tendril-like appendages, neon flowers and scattered glowing bits. It looked a bit droopy though, so just as I would with a normal plant, I gave it a bit of water. In this case, it was by swiping a bit on the Magic Leap touchpad, selecting the watering can tool pouring using the controller.

My Seedling sprung back to life, but then a notification popped up warning me that it was infested with parasites. Time to really get to work. I found the tweezer tool and went about methodically searching for anything that looked odd. That's when I noticed a few parts of the plant that didn't seem to belong. When I moved closer, those off-color portions started to glow. I gently yanked them off with the motion controller, and patted myself on the back for a job well done. Well, sort of — now, my plant looked a bit overgrown. Another notification appeared instructing me to give the plant a trim, so it was time to equip the pruning tool. That's when the bonsai tree connection really became clear.

As I moved around, hunting for dead buds and warped branches, I was surprised by how accurately the Magic Leap Controller tracked its movement in space. I was able to prune between healthy leaves and branches just as easily as I would on a physical plant. (I'm giving myself a bit of gardening credit here.) It certainly worked a lot better than trying to turn the virtual book's pages with my fingers.

Even though my Seedling looked better than ever, it was still hungry. That's when I noticed some orbs floating above the plant, and a notification instructed me to "feed" them to my plant's large, mouth-like flower. Again, the tweezers came out. I plucked the orbs, offered them up to my Seedling, and watched as it absorbed each point of light. It was like feeding fireflies to a Venus flytrap. (Okay, so maybe it's not really like taking care of a bonsai tree at all.) 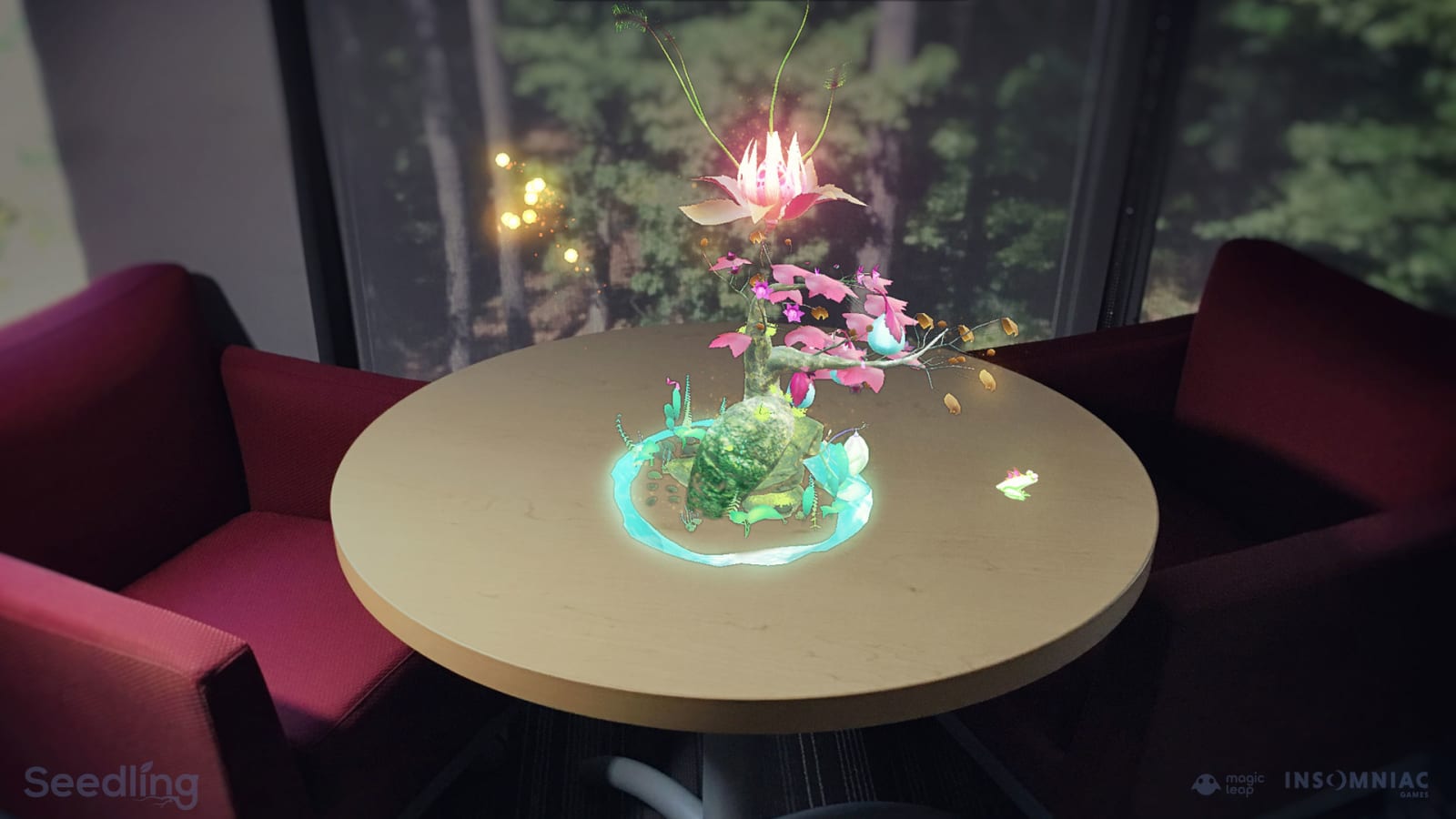 Not every Seedling session will be so action packed — Insomniac sped up the growth of my plant by a few weeks. Still, I found the experience to be surprisingly relaxing. It's a bit like nurturing a Tamagotchi or other virtual pet (though Insomniac assures me you can't actually kill your plant). There's a meaningful sense of accomplishment, and not much to get stressed over. And unlike VR games, I didn't feel isolated from reality since I could still feel the real world, and my eyes didn't feel like I was forcing them up against a very bright screen.

While I was impressed with the demo, it was clear that I needed some hands on time Seedling to really get a sense of it. Magic Leap provided me with a headset to test at home, but unfortunately it took a while to arrive, so I've only had a few play sessions to judge. At the very least, it was helpful to experience the game's actual onboarding scenario. Upon launching, it scanned my living room and asked me to place a virtual briefcase on a clear spot on my coffee table. After a jaunty welcome recording played, I picked up a retro sci-fi seed gun from the case, pointed it at my coffee table, and hit the trigger. Boom -- there was an alien plant in my house.

The narrator helpfully directed me to water, feed and trim the plant, and it quickly grew into something that towered over the pile of books and DVDs on the table. After I got done with the first round of care taking, though, there wasn't anything to but wait until the next play session. I sat and stared at my Seedling for five minutes, but nothing else happened. At least my guide strongly hinted I should just check back on the next day, but I can imagine some players being frustrated.

Before you ask: no, Seedling isn't the sort of thing that would convince anyone to get their own Magic Leap headset. But it's an intriguing first stab at augmented reality by Insomniac Games. The studio tells us that it's the beginning of a larger story, something that will continue with other experiences in the future. Perhaps those titles will be more in line with what we've come to expect from Insomniac. But this game is a reminder that Magic Leap isn't your typical entertainment platform. It doesn't really need huge flagship titles yet. Instead, it needs experiences that prove AR has a place within our lives. To that end, Seedling succeeds. Now if you'll excuse me, I have a virtual alien plant to water.