The Morning After: Amazon's Alexa adds security to its resume

My voice is my passport, verify me.

Good morning! As we feel our way through the haze that is a combination of corporate party and holiday-season prep, Monday kicks off with stories on Alexa's new security talents, a car coming in 2021 that we already drove, and expect Year In Review reports to start hitting Engadget later this week.

Amazon's framework can arm your system with just your voice.
Alexa can control your home-security system Amazon has upgraded its voice assistant to work with security systems. You can arm or disarm them, specify certain modes (home, away and night) and simply check in. The functionality is available now in the US, with companies like Abode, ADT, Honeywell, Ring and Scout Alarm already using it.

Security wise, you have to manually enable disarming by voice, and you can specify an Alexa-specific voice code instead of shouting your PIN code to everyone within earshot. 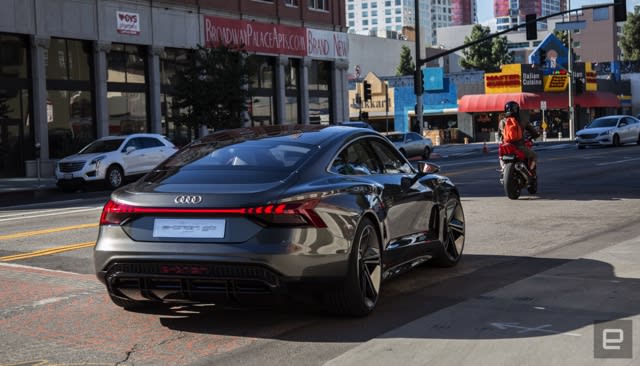 If an automaker unveils a concept car, the chances that anyone has the opportunity to set foot in that vehicle and drive it on the street within a year is slim to nil. But Audi went in a different direction and let Roberto Baldwin drive the all-electric Audi E-Tron GT concept car -- scheduled for arrival in 2021 -- less than a week after it was unveiled at the LA Auto Show. Here's how it handled.

It could be useful for tiny parts in robotics, medicine and beyond.
MIT can shrink 3D objects down to nanoscale versions

MIT researchers have devised a technique for making nanoscale versions of 3D objects using a wide variety of materials and shapes. The team ultimately reversed a process for imaging brain tissue, whittling a relatively large object down to a creation one thousandth its original size. The big question: Why? The researchers suspect this could initially be used for creating specialized optics for science, microscopes and even smartphones, but it could be tremendously useful for nano-sized parts in robots.

Over the weekend, Colin Kroll, the co-founder of both HQ Trivia and Vine, died of an apparent drug overdose in Manhattan at the age of 34. Kroll will be remembered for creating Vine alongside Yusupov and Dom Hoffmann. While the service lasted four years after its 2013 debut, it became a cultural phenomenon and was purchased by Twitter for a reported $30 million. Kroll then went on to found mobile quiz game HQ Trivia.