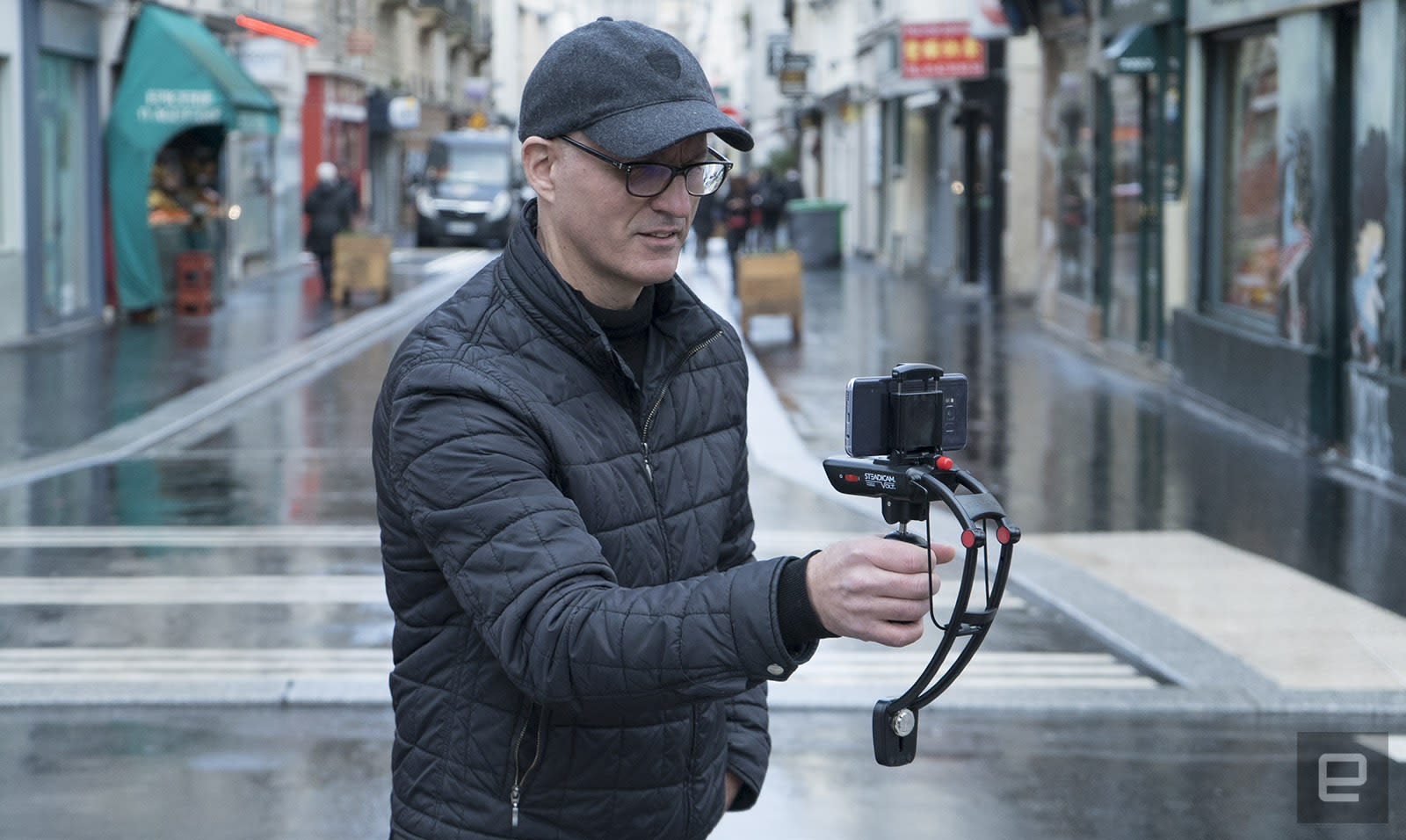 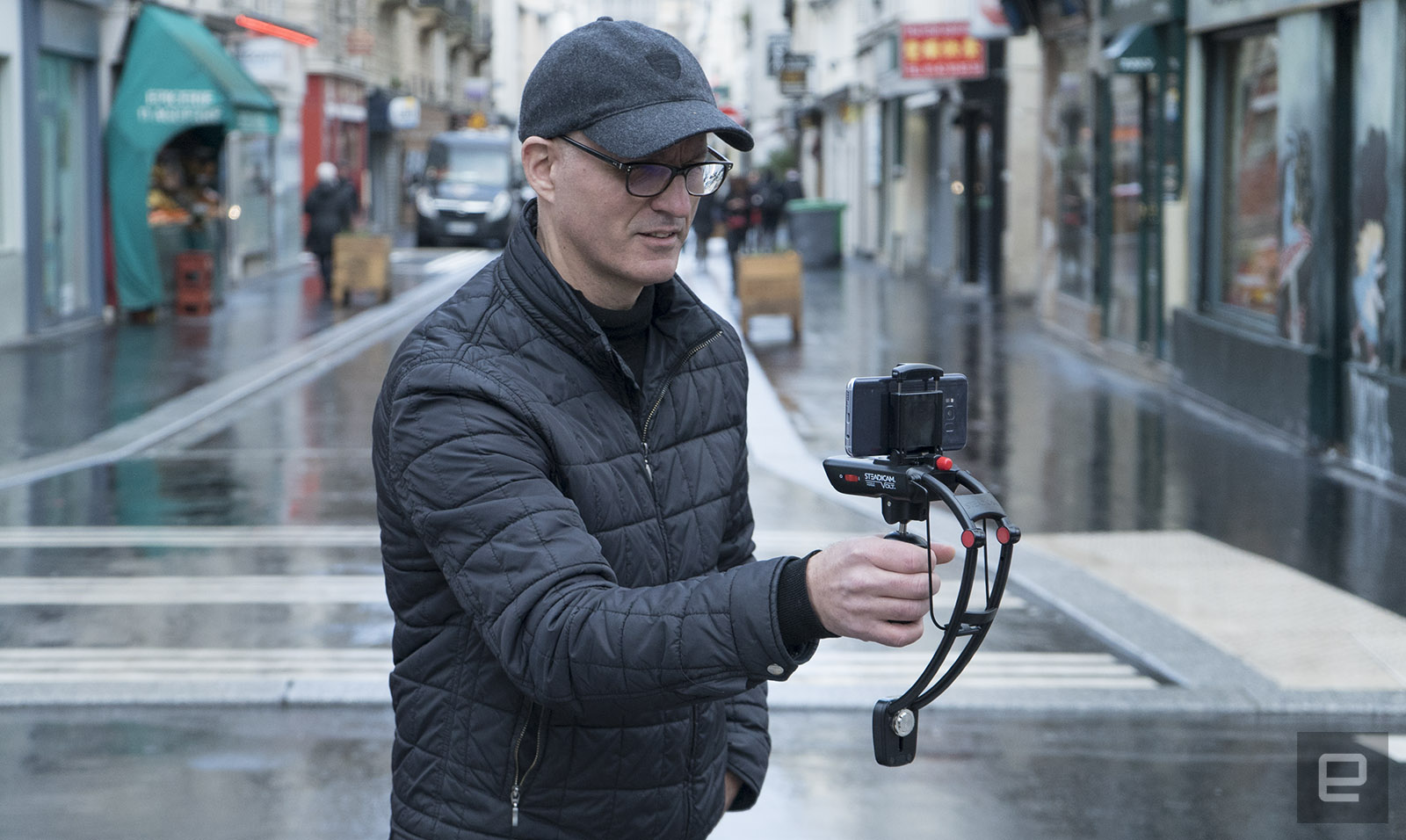 Steadicam is the company behind iconic tracking shots in films like Rocky and Return of the Jedi, so when parent Tiffen launched a smartphone stabilizer bearing its name at CES 2017, there was a ton of interest. The $195 Steadicam Volt nabbed more than $1 million on Kickstarter and is now on sale at stores. It works very well and can produce natural-looking, cinematic shots, but don't expect it to do that out of the box. It takes a fair amount of time to set it up, and even longer to master.

The Volt is a rather unusual type of stabilizer. Like Steadicam's classic products, it relies on balance and inertia, but it also has a motorized gyro like the DJI Osmo and other electronic gimbals.

The gyro and electronics are tucked into the body. There's a platform on top for the phone, and a handle and weighted frame below. Most of the parts are built from plastic, which doesn't impart the most solid feel but makes the Volt very light -- around a pound. It measures a bit more than a foot tall by about 9 inches deep, but it's compact enough to squeeze into a jacket pocket when folded. Tiffen says the reason for the hybrid gimbal/gyro approach is to give users maximum control. By applying pressure to the control surface just above the grip, you can quickly flip it around or change focus to a different subject. The Osmo and other products, on the other hand, can pan only as fast as the motor can turn.

The balance aspect means you can't just take it out of the box and start shooting, though. First you have to set it up to your specific smartphone so that it's perfectly -- and I mean perfectly -- adjusted. Once that's done, you must learn how to use the thing so that you can shoot exactly the way you want.

I tried out the Steadicam Volt with a Samsung Galaxy S8, which already has a pretty darn good camera that shoots at 1080p or 4K (Ultra HD) resolution. As with any smartphone, handheld tracking shots can look very jerky, even if you operate it as smoothly as possible and turn on the built-in stabilization. For live streaming, even minor hand shaking can be noticeable too. That's where the Volt can help.

To balance the Volt, you mount your phone and hold it horizontally. If the back tips up, you need to add weights until it tilts down, then adjust a slider for fine-tuned control. I needed just two weights for my Galaxy S8, but if you have a larger device, you'll likely need more.

For side-to-side balance, you just push the phone to the right or the left in the cradle. Finally, there's a screw adjustment that moves the phone back and forth so that it's balanced perfectly and pointing ahead, not to the sky or the ground. Users have reported that some Volts don't sit perfectly level, but there's a firmware update to fix that issue.

With everything set up, I took the Volt to the street. You can't just point it at your subject and capture glorious tracking shots -- you have to get the hang of using it and develop a light touch on the controls for pans or tilts. Also, like most handheld stabilizers, the Volt doesn't fix up or down movements, so you have to learn a sort of stealthy, smooth walk.

The Volt has two modes: sport and cinema. The former is on by default and offers a more rigid, easy-to-control operation. Cinema mode, activated by pushing the front button twice, provides less resistance, making for a smoother but touchier gimbal. You can use your built-in camera or any other app, including Tiffen's own Image Maker. I didn't have much luck with that app myself, as it crashed to a black screen when I tried using it.

It weighs less than a pound, so, with a light smartphone like the Galaxy S8, the Volt is easy to use all day. However, the 8-hour battery life is less than you get with other stabilizers, so if you do a marathon session, you'll need to carry spare cells. Unlike with other products, though, it's easy to swap them. That said, it will still function as a (much cruder) stabilizer even without power, so you won't be totally stuck with no power. 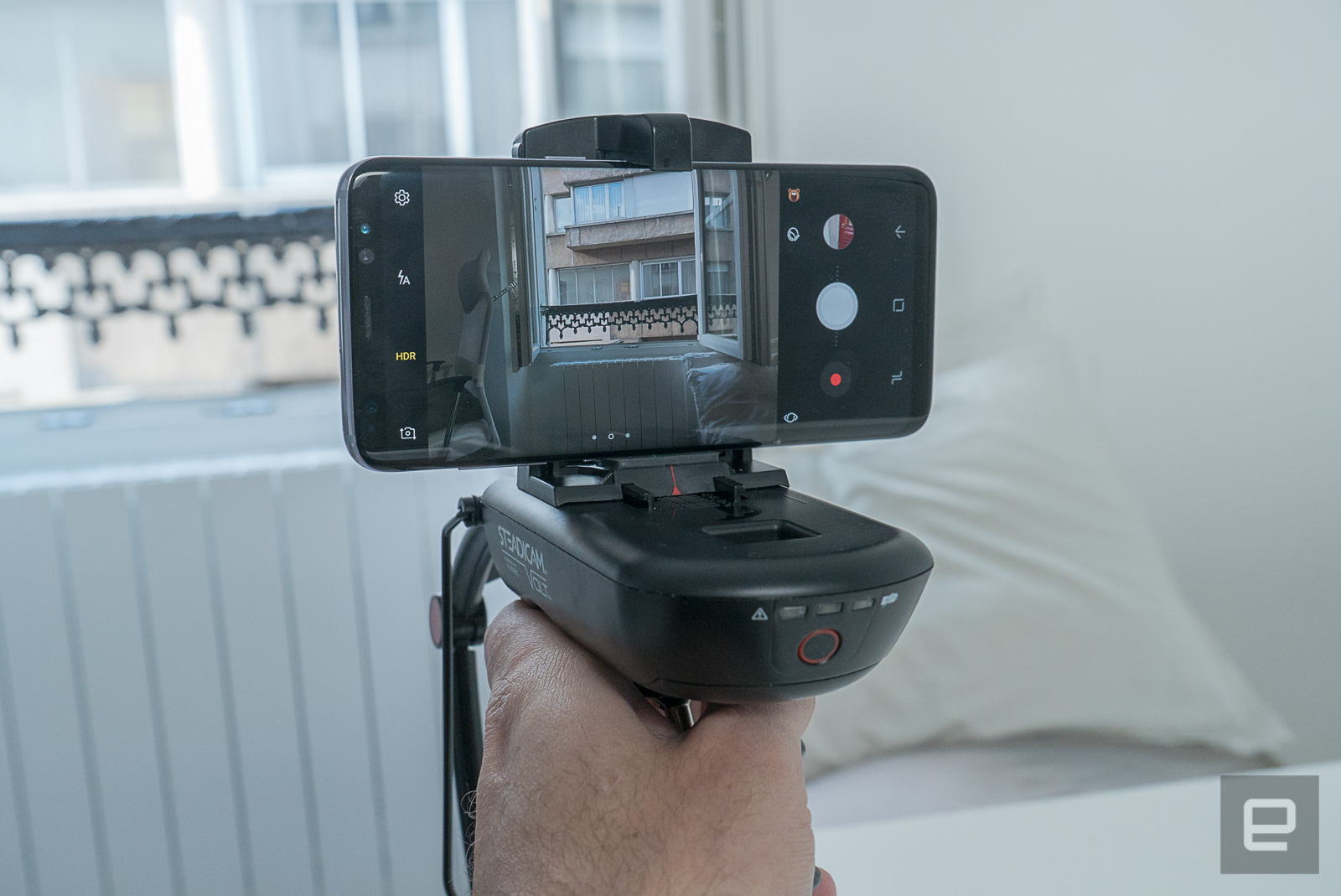 The Volt always stays where you point it, whether up, down, left or right. If you want to change the angle, you merely apply pressure to the control stalk. Tiffin recommends using both hands, one to hold the gimbal handle and the other to control camera movement. I found that worked fine for me, but, with a bit more practice, I could hopefully do it one-handed, like Steadicam inventor Garrett Brown.

The Volt seems like an ideal stabilizer for vlogging or recording Facebook Live videos, since it's fairly easy to control and tracks subjects faithfully. Flipping to the front camera and back requires a bit of care, however, in order not to jolt your phone or flip it around.

That brings up what is perhaps the Volt's biggest flaw. If you happen to be out on a windy day, your phone could catch a gust and go out of control. Electronic stabilizers like the Osmo don't have that problem to the same degree, as they're more rigidly fixed. The solution is to brace the Volt harder with your hand, but that removes some of the smoothing benefits.

All told, I liked the Steadicam Volt, but it's not for everyone. Users who want handheld, stabilized video with little setup and learning would probably be better off with the DJI Osmo, which also costs $195. There are also numerous knockoff electronic smartphone stabilizers on the market for around $100, if you want to take that risk.

If you're willing to put up with the time needed to set up and learn it, however, the Volt is worth your attention. Once you become proficient (practice is the only way), there are more types of moves that you can do than with an electronic gimbal, and it gives you more direct control and feel too. The resulting tracking shots, I believe, are less mechanical and more organic-looking than you get with purely mechanical stabilizers. Just watch out for those gusts.

In this article: cameras, gear, gimbal, mobile, smartphone, stabilizer, Steadicam, Tiffen, video, Volt
All products recommended by Engadget are selected by our editorial team, independent of our parent company. Some of our stories include affiliate links. If you buy something through one of these links, we may earn an affiliate commission.