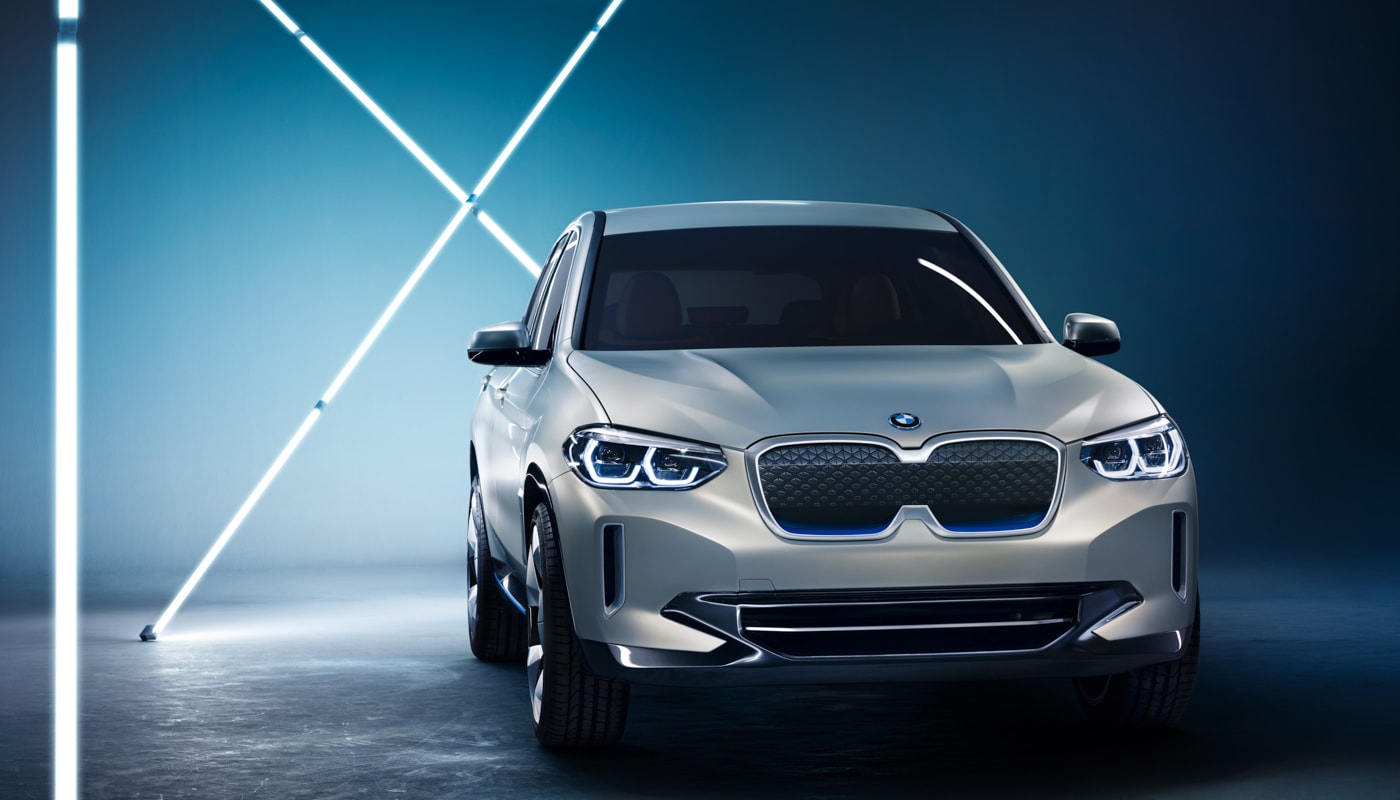 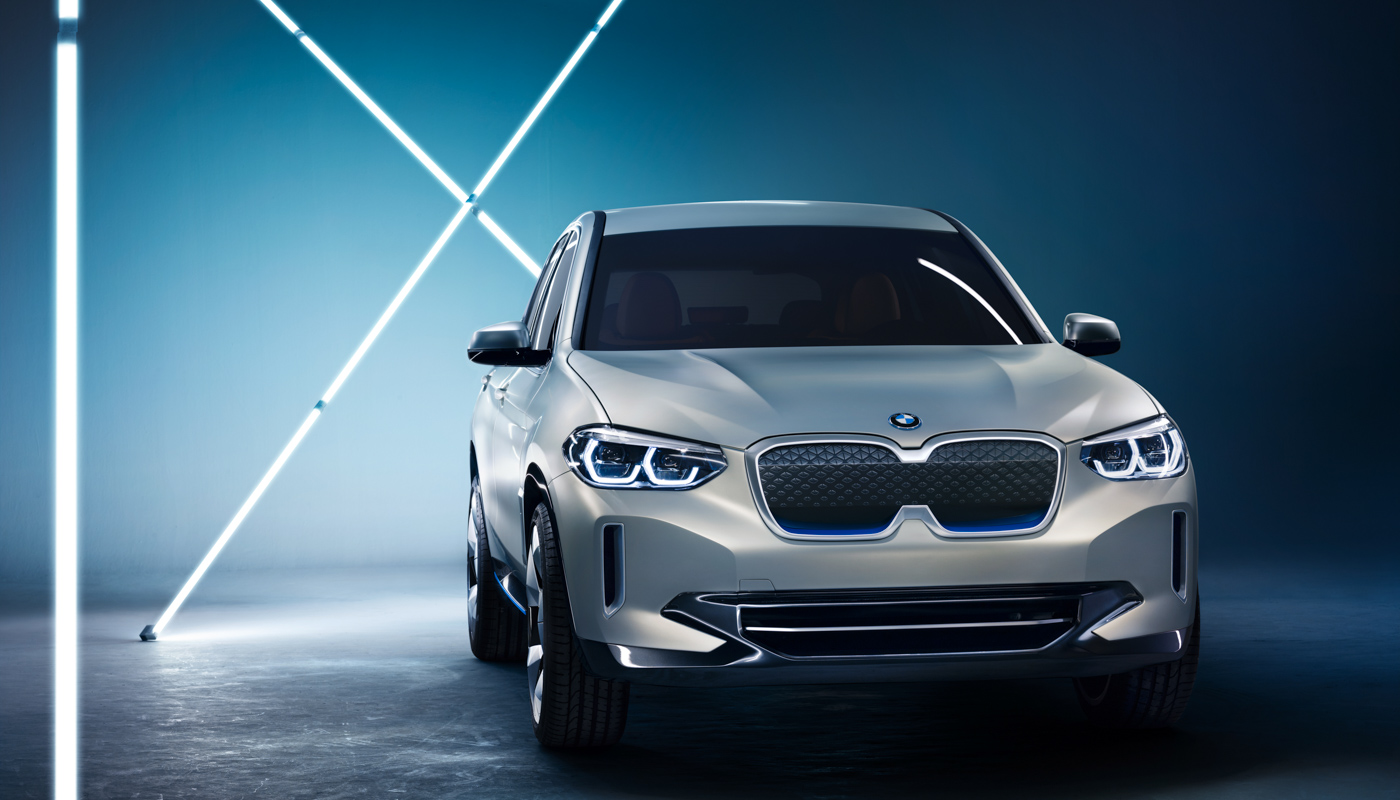 As we enter the BMW Group Research and Innovation Centre (also known as FIZ) in Munich, I'm asked to give up my ID. Guests are rarely admitted and journalists are almost never allowed inside. The automaker is about to show me its latest concept vehicle in a building that's the birthplace of the future of the brand. I'm led to a room where a small SUV is covered by a sheet. There's none of the pomp and circumstance that comes with an auto-show reveal (that'll happen in Beijing a few weeks later). Instead, the cloth is removed to show off the pure electric Concept iX3, a vehicle that will make its way into production in 2020. Other than a few design tweaks and an off-white matte paint job, the crossover looks like an X3. That's the point.

The i brand was launched with two very different and equally polarizing vehicles: the urban i3 and the i8 hybrid supercar. If the character Tron were to escape the grid and need two cars to get around, these would be his first choice. Which is great for fans of science fiction, but off-putting to some. "It's difficult with such niche products to reach the main customers in the wide range." Domagoj Dukec, head of the design team for BMW i and M vehicles, said during the unveiling. 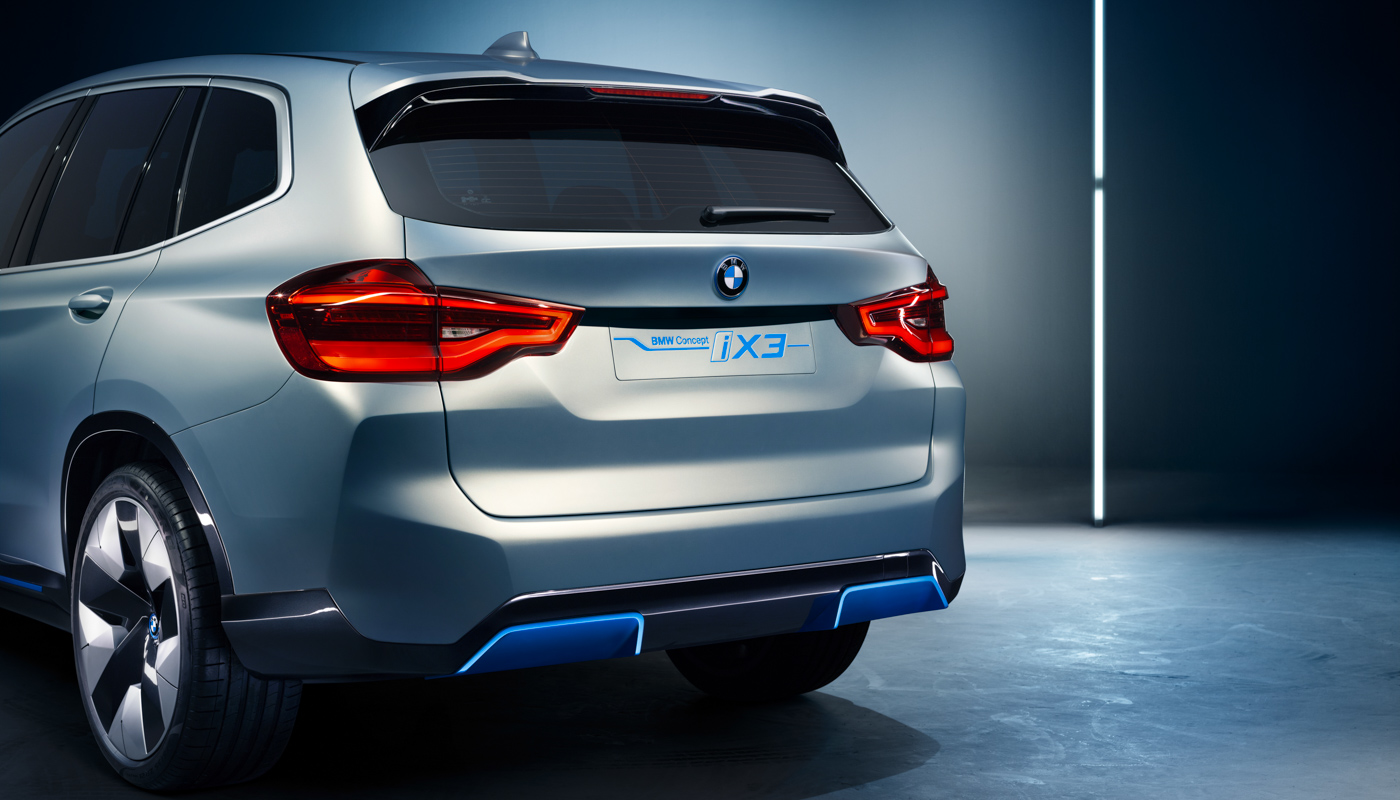 That's not to say that when the iX3 goes into production it will blend in with the rest of the SUVs on the road. The body has been smoothed out to reduce wind resistance and the iconic BMW "kidney" grill (found at the front of all the automaker's cars) no longer has slats to feed air to the radiator. The car doesn't need that air and it lowers the vehicle's aerodynamics.

One thing that will differentiate it, is the color blue. All the i cars will have blue badges and accents to show the world you're piloting a greener vehicle. Even the space where you would typically see the exhaust has been replaced with blue rectangles. The familiar design language of a BMW is there, even if the legacy internal combustion engine elements are gone.

"We don't invent a completely new car with the design. We give it this cleanness, this boldness and a more modern design," Dukec said. The result is an SUV (or as BMW calls it, an SAV -- sports activity vehicle) that appeals to anyone that's already a fan of the petrol version of the crossover. If you like the X3, you'll like the iX3. But it takes more than looks to sway folks from the tried and true world of gas-powered engines.

Under the hood, it delivers the goods with a 249-mile range (which may vary depending on regional regulatory standards and testing) and 270 horsepower (the regular X3 has 248). According to BMW, the 70kWh battery charges up to 80 percent (via a 150 kW DC fast charger) in about 30 minutes. 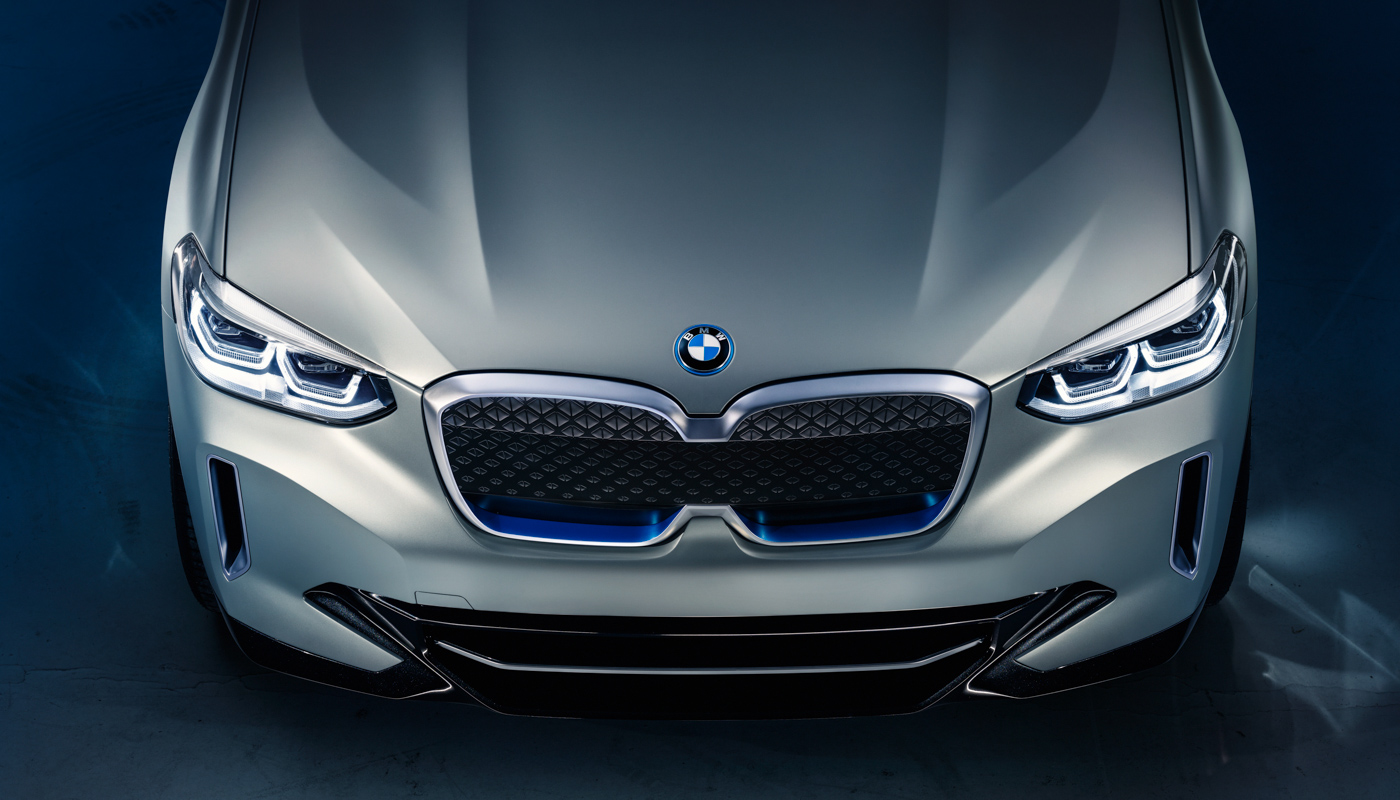 In the future that modularity will expand beyond eDrive to how the car's themselves are built. The automaker will have a single platform for each car that accepts gas, hybrid and pure EV drivetrains. The result should give the automaker the agility to adjust production of vehicles, regardless of how they are powered, based on demand.

In other words, there will be more i vehicles, like the Concept iX3, that only look slightly different from their gas counterparts. Frankly, it's those cars that'll grow the EV market. For fans of the i3 and i8 (like myself), BMW will continue to introduce -- and put into production -- cars that look like they're from the future. They probably won't sell as well and -- like the i8 -- will end up on more posters on people's walls than in people's garages.

As the presentation ended another journalist asked why the windows of the Concept iX3 were blacked out. Should we expect a surprise at the Beijing Auto Show? When the car goes into production would it have a next-generation infotainment system or stylish new interior? BMW informed us that owners of the iX3 will have the same in-car experience as the owners of the X3.

Dukec notes that there will always be drivers that want to express their allegiance to EVs in an extreme way. For them, there's the niche dedicated i vehicles. But to continue down the electrified road, the automaker needs to actually sell cars to everyone. 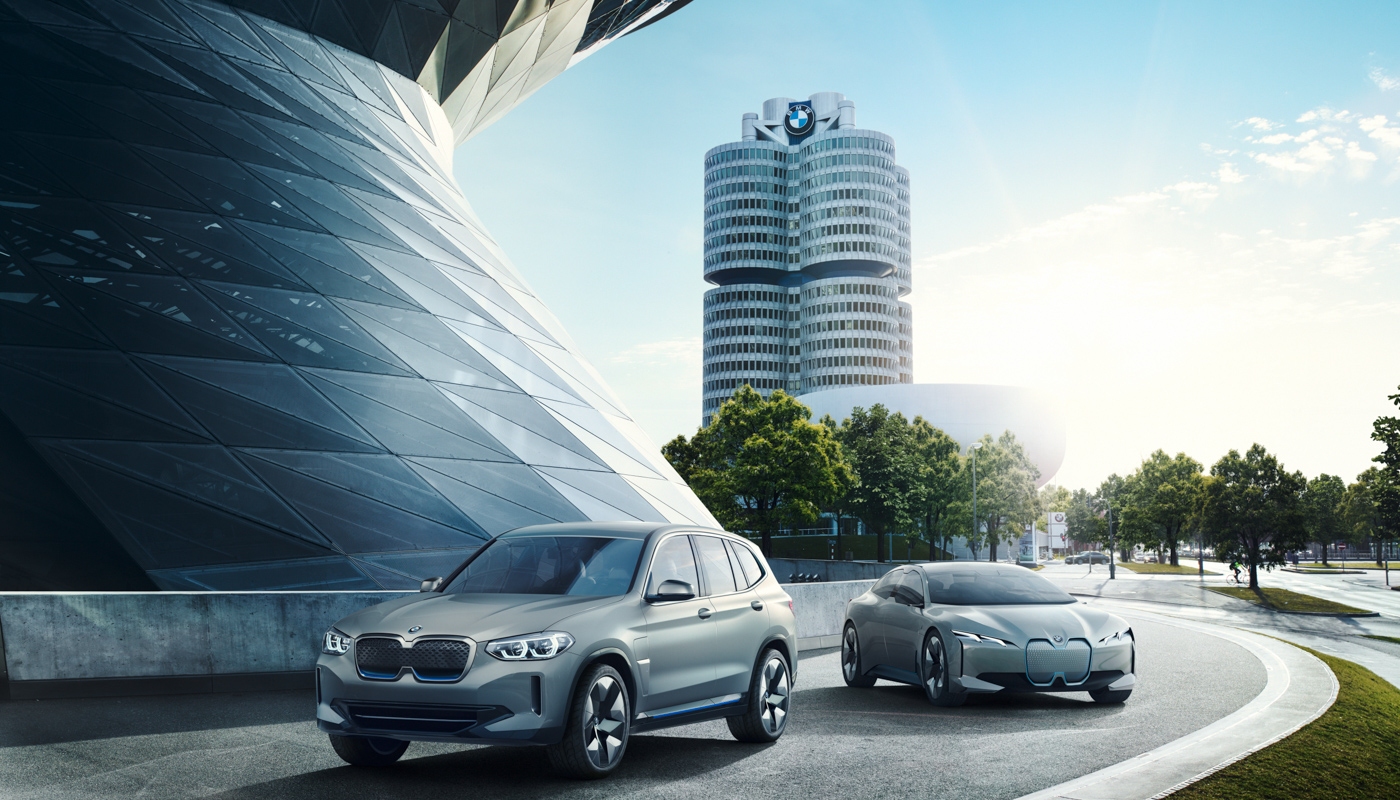 I had hoped to see something outlandish in the design studio of FIZ. Something that glowed blue that would make people stop in their tracks and stare as it rolled down the road. Instead, I saw the future of BMW's electrification. While it won't turn as many heads as it rolls down the street, as long as it sells to the masses, BMW is totally fine with that.

In this article: Beijingautoshow2018, BMW, business, design, edrive, ElectricVehicle, ev, gadgetry, gadgets, gear, ix3, tomorrow, transportation
All products recommended by Engadget are selected by our editorial team, independent of our parent company. Some of our stories include affiliate links. If you buy something through one of these links, we may earn an affiliate commission.