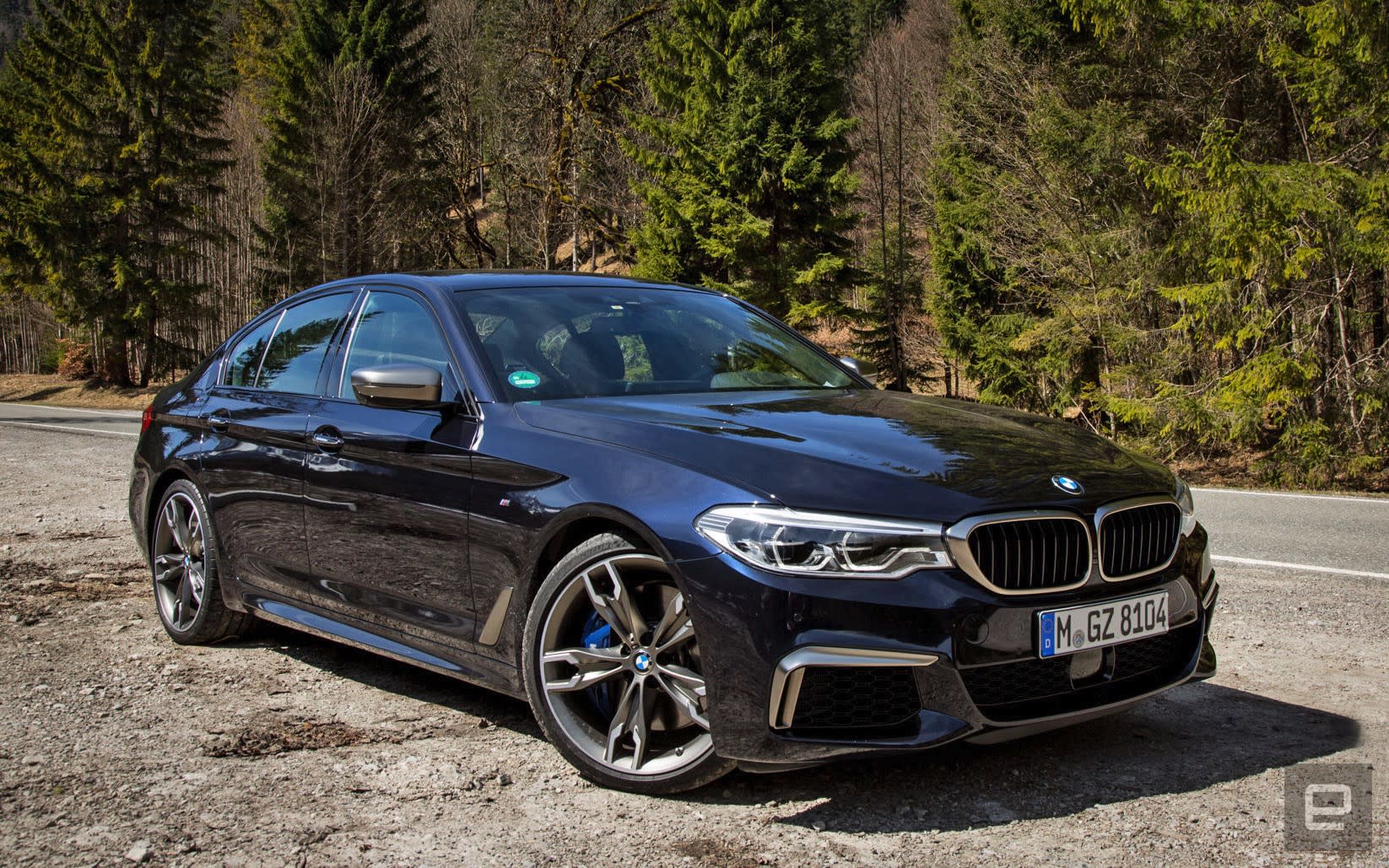 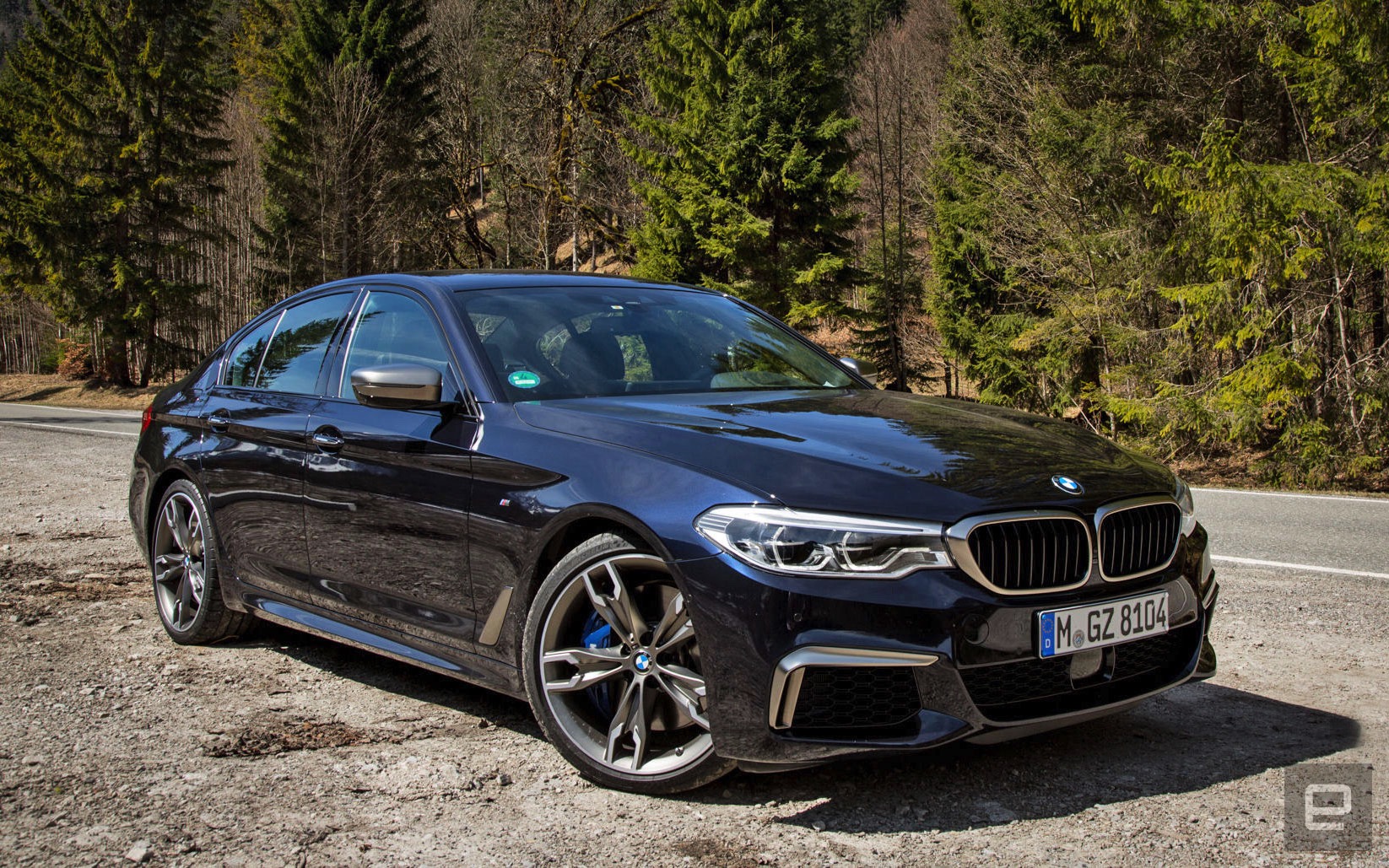 Cruising along on the autobahn at 220 kilometers per hour (136 miles per hour) is equal parts exciting and anxiety-inducing because my brain can't shake the feeling I'm still breaking the law. That concern didn't stop when I pulled over. I also experienced some apprehension about using BMW's Display Key to control the $73,900 BMW M550i sedan. The M550i is a happy medium between luxury and sport. It’s full of tech that’ll reduce commuter stress and even the almost gimmicky Display Key has its place in your pocket.

Be the first to review the M550i xDrive?
Your ratings help us make the buyer’s guide better for everyone.
Write a review

The Display Key with its tiny touchscreen basically replaces a lot of the features found in a car's companion app. Drivers can lock and unlock doors, set the temperature in the car and check on their fuel level from a range of about 980 feet.

I wasn't nervous about using the key fob to check on the car's status, though. It's the key's ability to act as a remote control that lets you pull the vehicle in and out of a parking space without you sitting in the automobile that had me a little freaked out.

I was nervous because even though while it is parking the car is traveling at only 1 mile per hour and uses its sensors to keep from running into other vehicles, I started thinking "what if it hits the other car and oh great now I'm in Germany with a wrecked car and a rightfully angry driver yelling at me." It turns out that this worry, like my concern about driving fast, it was misplaced. 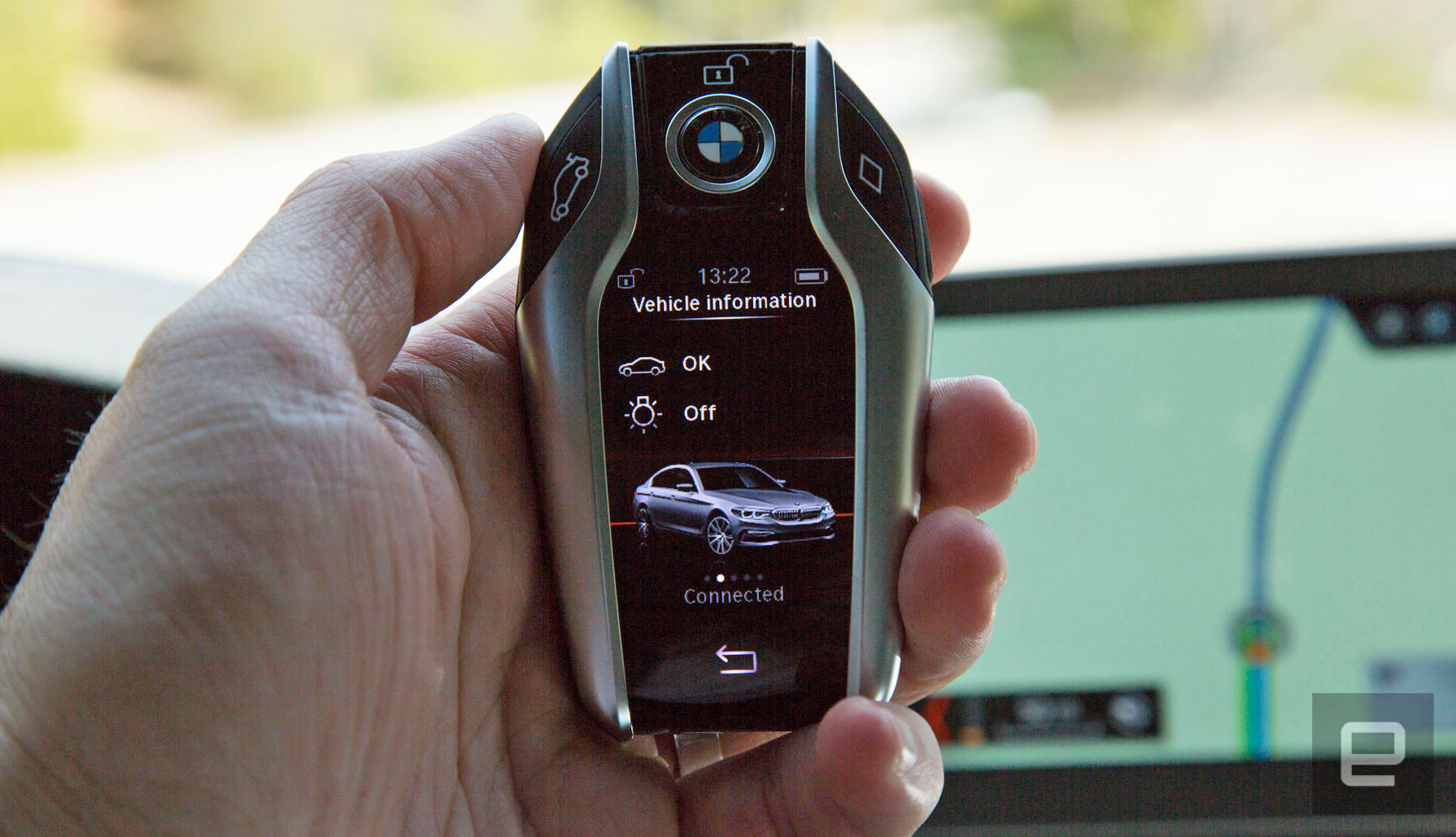 While pulling into a space in a parking lot, if you know there's not going to be enough room to exit the vehicle, the driver can use the key fob's Remote Control Parking option while standing outside the M550i. Just get out, press the parking button, and with the controls on the tiny display, pull the car into the space. Of course, you still have to make sure you don't accidentally run into anything. BMW says the car's sensors will bring it to a stop once it determines you're completely in the space, but it's still on you to stop any potential collisions.

The thing is, I would never pull into a spot like that (unless it's an assigned spot in a tight urban garage). If there's not enough room to open my doors, there's not enough room for the other vehicles and now you've either stopped someone from getting into her car, or you risk someone dinging your car. If I return and I'm boxed in on either side, that's where the Remote Control Parking makes the most sense. I can just pull out and be on my way.

The Display Key sounds great, but the limited range stops it from being a must-have feature. With a range of fewer than a 1,000 feet, it's helpful when the car is parked in front of your home or work. At, let's say, the mall, it becomes less beneficial because the car is out of range. At that point, you would use the BMW Connected app on your smartphone. Just whip out your phone and you can take care of most of the key's features not counting the remote parking.

So the key feels a bit gimmicky, but because of the parking feature, it's actually quite useful in certain situations. And frankly, it's only one element of a car that's stuffed with tech.

When I was actually driving, BMW's semi-autonomous adaptive cruise control and lane-keep-assist proved to be a blessing while I was stuck in Munich gridlock. The car handled slow-moving and stop-and-go traffic with zero issues. I can't stress this enough: If you're about to buy a car, splurge on the driver's assistance package. Especially if you commute. You can thank me later.

One thing I do want to note is how much I liked the HUD (heads up display). BMW seems to have figured out how to layout a ton of information (speed, directions, alerts when you're following too closely, etc.) without it feeling crowded. 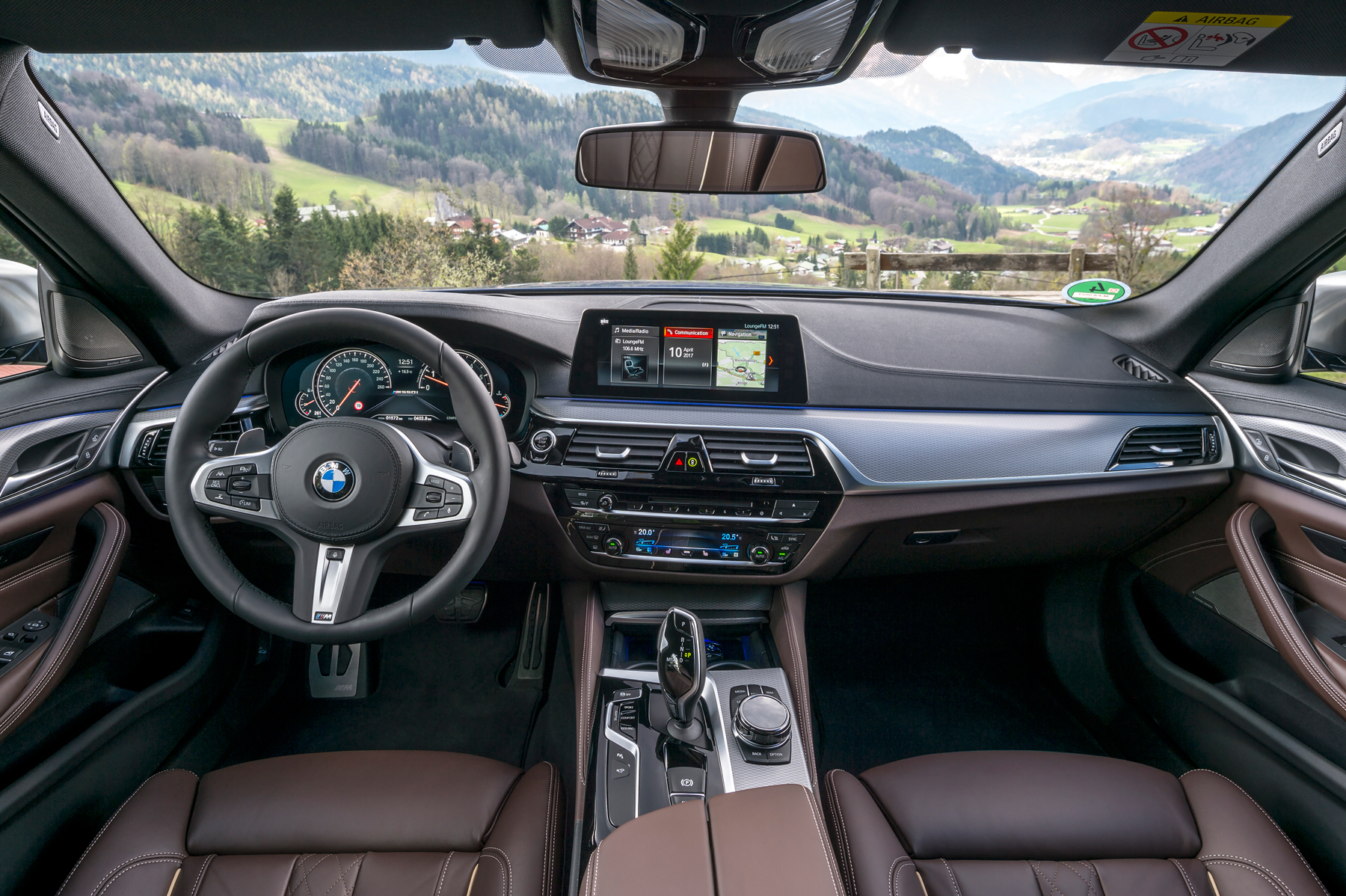 The BMW infotainment system is still a solid gateway to navigation, media and a host of other features. You can use the touchscreen, but unless I was using CarPlay (still a $300 option, which is ridiculous), I relied on the control knob in the center console.

Also because that controller is where your hand sits at the end of the center armrest near the shifter, I could stay planted firmly in my seat instead of leaning forward to reach the touchscreen. Not deviating from the preferred sitting position is important when you're driving fast, and you will want to drive fast because the M550i is quick. The 4.4-liter twin turbo V8 engine will get you from zero to 60 in 3.9 seconds. Plus, it's an all-wheel-drive vehicle that has 456 horsepower and 480 pounds of torque, so all that power is firmly planted on the ground when you stomp on the accelerator.

Yes, it's crammed with a lot of power, but it's also comfortable. It's a luxury sedan that even after a long day of driving in multiple conditions, I was sad to exit and hand back to BMW.

But it sits in a weird place in the 5 Series lineup. It has more performance than your typical 5 Series (the car maker's midlevel luxury sedan), but it's not completely an M vehicle (the automaker's high-performance brand) with all the power and tuned suspension that would imply. It's a bit of a happy medium and you notice that in the corners. It does an outstanding job as a luxury sedan, but if you judge it while taking sharp corners as a sport sedan (an M car), it's not quite there. Which is totally fine because the starting price for an M5 sedan is $102,600, and most folks who buy that car will rarely get a chance to push it to its limit. 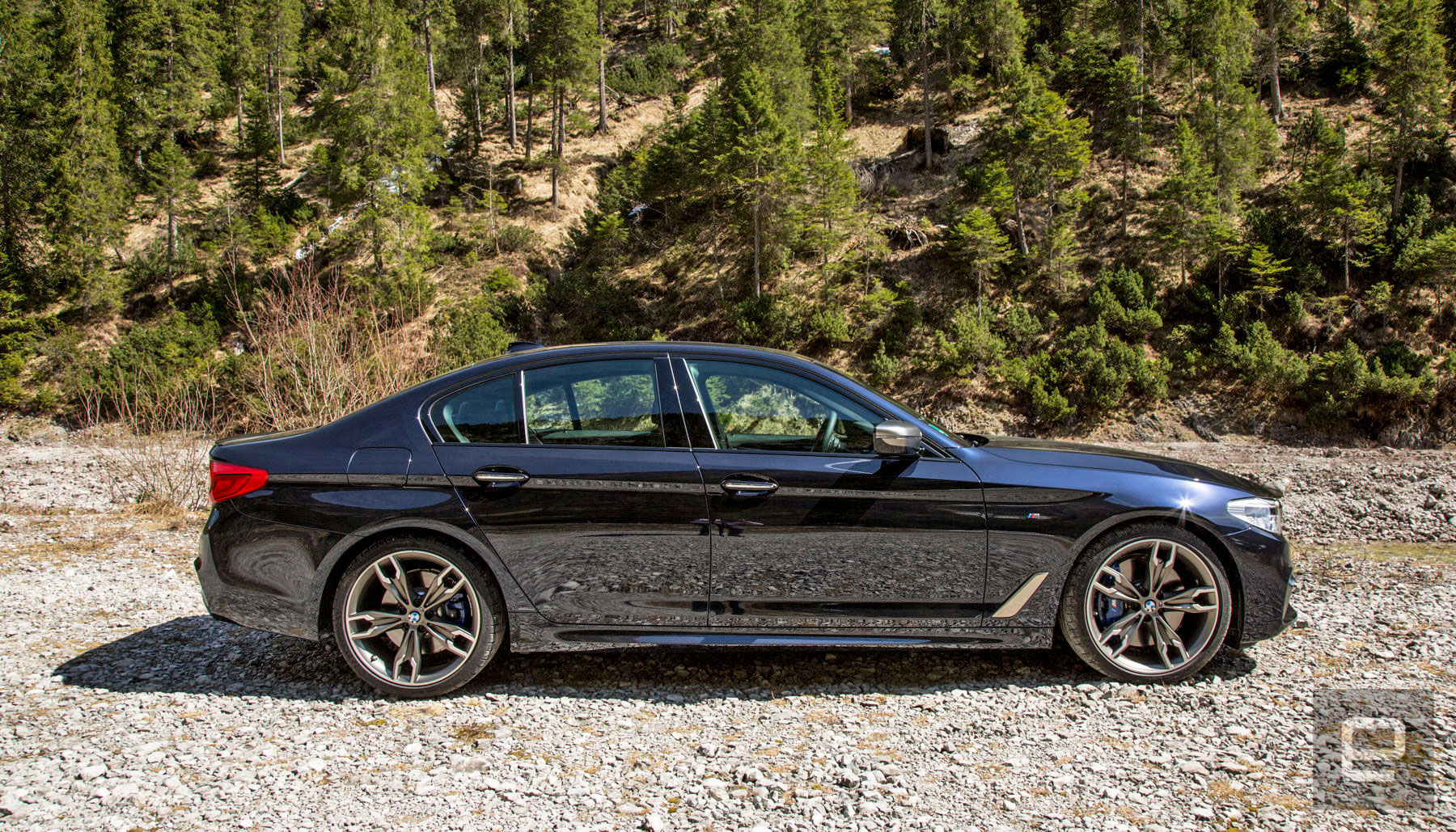 The M550i I tested with all the bells and whistles was about $88,000. Sure, an M5 will blow it away in the corners and in a straight line, but we don't always need an insanely powerful car to get around. The M550i is "good enough." If that sounds like a compromise, it's not. The slightly more powerful 5 Series is an enjoyable cruiser that'll leave you with some extra cash in the bank. And if your door is blocked when you leave your financial institution, you can use the Display Key to pull out.

Source: BMW
In this article: 5series, automobile, BMW, displaykey, gadgetry, gadgets, gear, m550i, review, transportation
All products recommended by Engadget are selected by our editorial team, independent of our parent company. Some of our stories include affiliate links. If you buy something through one of these links, we may earn an affiliate commission.