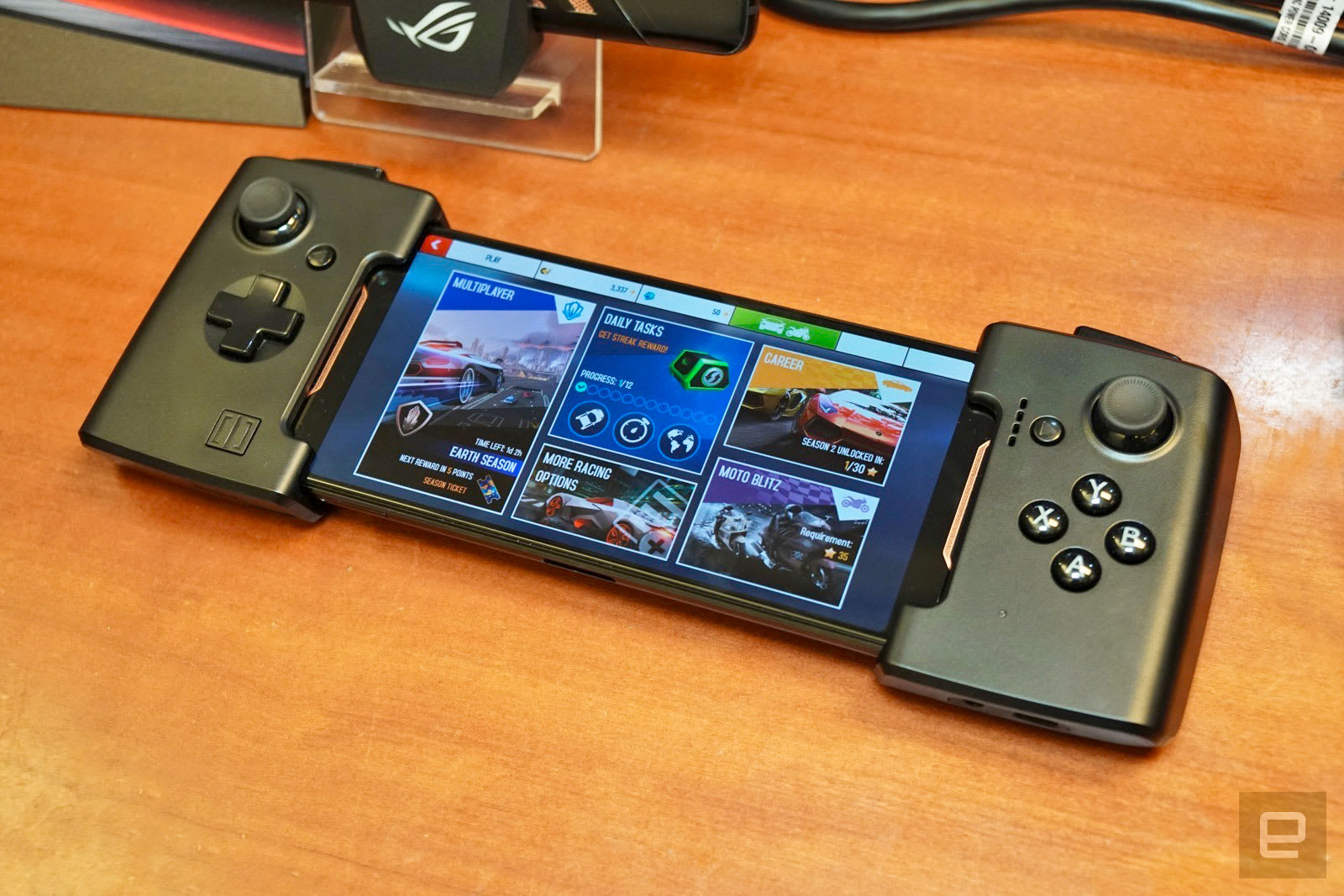 When ASUS announced the ROG Phone this week, I thought it was ridiculous. A gaming smartphone with a vapor-chamber cooling system? An external fan just in case the phone runs extra hot? As my colleague Dan Cooper said to me following the announcement, how far do you go before you give up and just buy a Switch? But the more I learned about the phone, the more I became enthralled by it. I realized that the very fact that it was so over-the-top is what made it weirdly appealing, especially to an ever-growing niche of hardcore mobile gamers. As strange as it may be, the ROG phone could be the latest sign that gaming phones are finally finding their audience.

It bears reminding, however, that history has not been kind to the likes of the ROG Phone. Nokia and Sony took stabs at gaming phones, but both ended in failure. The N-Gage was plagued with an unusual "taco" design that forced you to chat on it sideways and, perhaps more egregiously, you had to take the battery out in order to switch games. Sony's Xperia Play made slightly more sense, if only because of its PlayStation-inspired controls, but even that ultimately flopped due to lack of interest.

Several years later, however, gaming phones are starting to have their moment in the sun. Last year, Razer came out with the gaming-centric Razer Phone with its 120Hz refresh rate and "Game Booster" mode that aims to max out the phone's settings for the best game experience. Xiaomi joined the fray as well earlier this year with the Black Shark, which has a multi-stage liquid cooling system and a gamepad dock that adds a joystick and dedicated triggers. 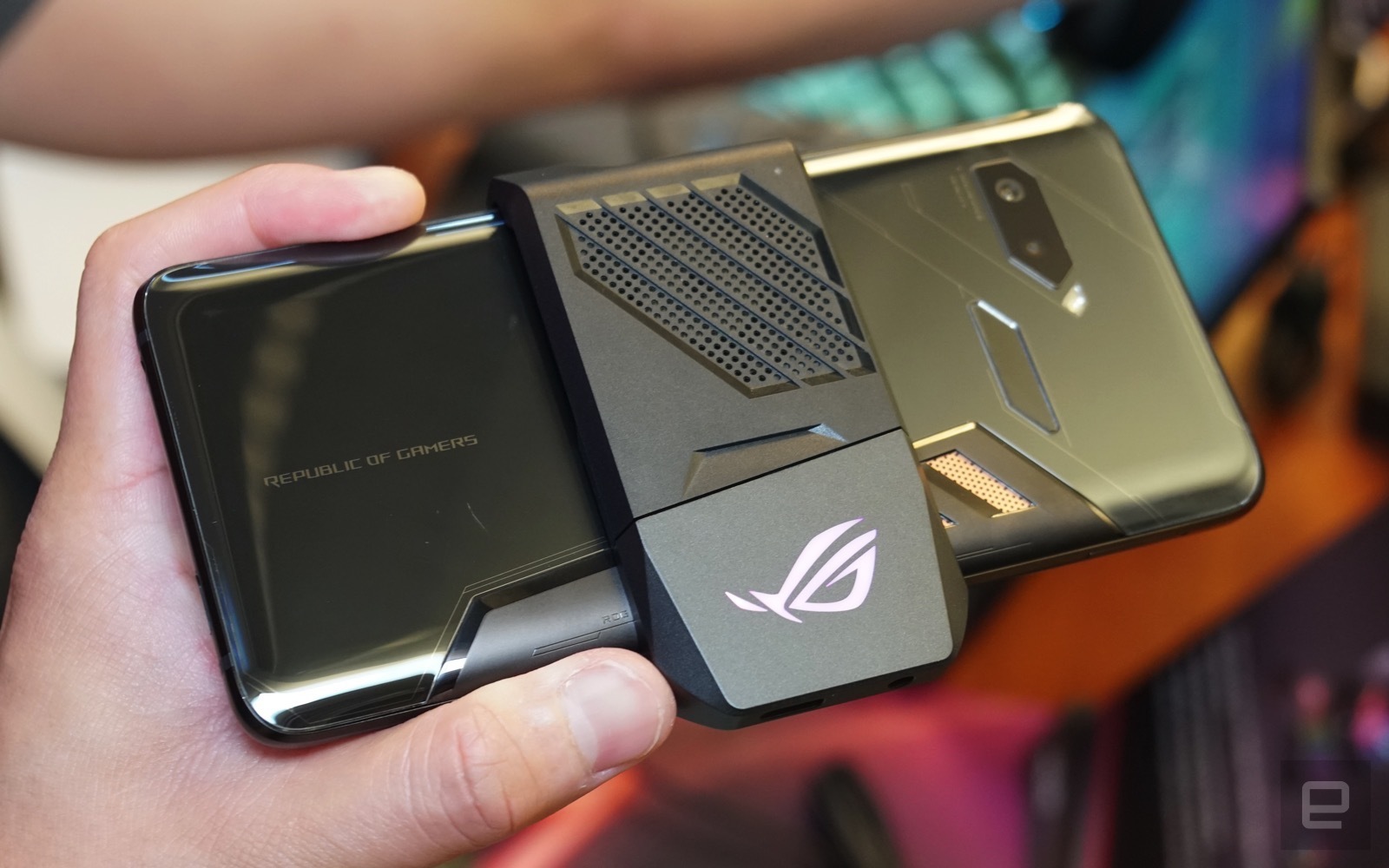 ZTE debuted a gaming phone called Red Magic under the Nubia sub-brand that also claims "multi-layer cooling tech" and "a game boost mode." The ASUS' ROG phone is by far the most ambitious attempt yet, what with its built-in shoulder triggers, charging ports on multiple sides (so you can game in landscape mode without the cable in the way) and, as mentioned, an advanced cooling system for those intensive gaming sessions.

So what's with the big resurgence? Well, just like with the PC and console market, it all comes down to one thing: games. While previous handsets like the N-Gage and the Xperia Play struggled to define their identity, gaming has changed a lot in the past few years. Back then, technical limits for mobile gaming meant that titles available weren't as good as those on a handheld console. Why play Crash Bandicoot on a dedicated smartphone when it plays better on the PSP?

But recent advances in mobile gaming and smartphones have changed the paradigm. The combination of more powerful, and more portable, mobile hardware, and the ubiquity of high speed internet, has meant that the old limits to what was possible no longer apply. As games have been freed from the constraints of the console and the PC, there's now a little more justification to experiment with a games-focused smartphone. 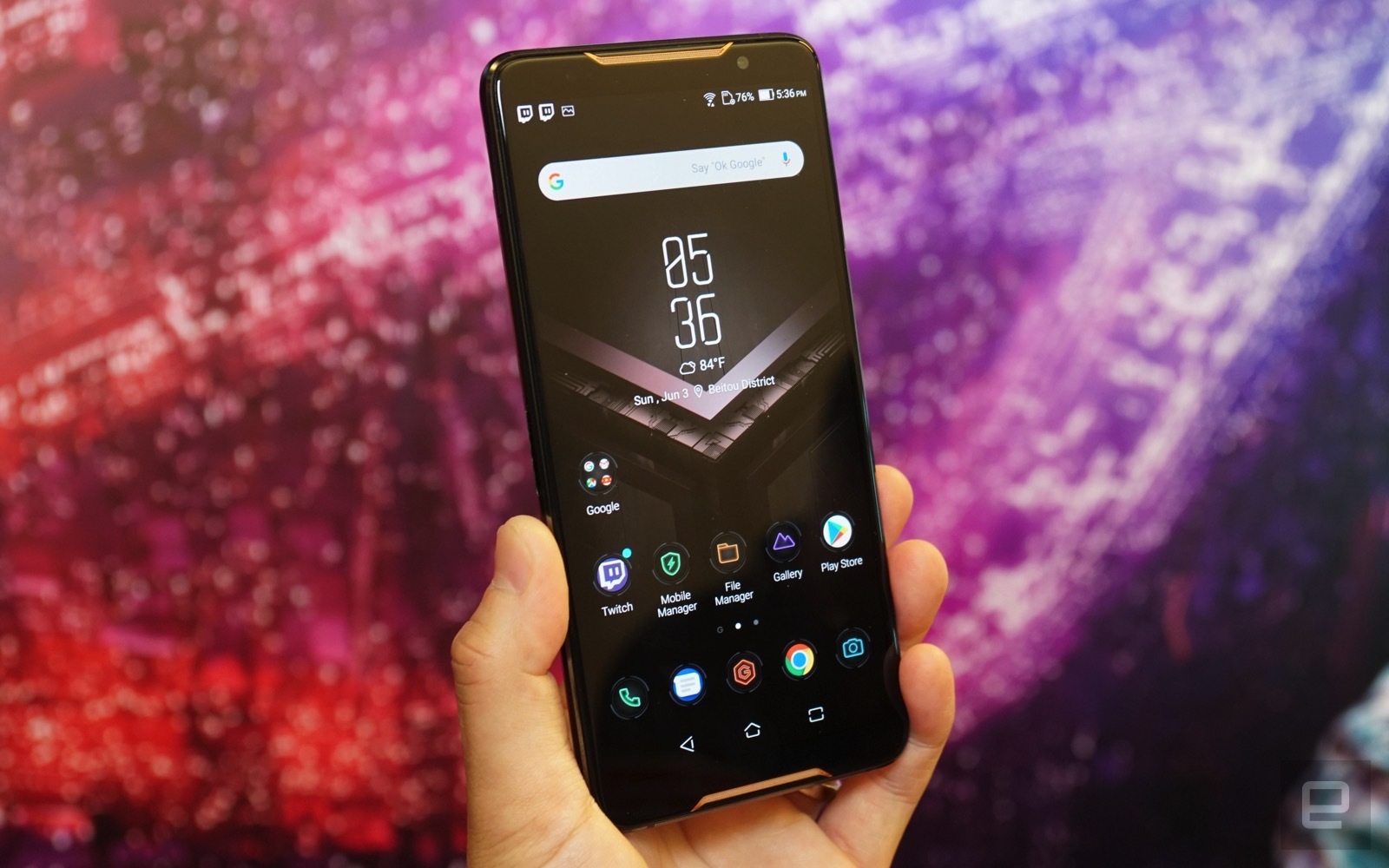 Plus, mobile gaming in China and in much of Asia is absolutely massive -- China's mobile market posted a revenue of around $15 billion in revenue in 2017. Multiplayer Online Battle Arena (MOBA) games have been available on Android for a few years now, with titles like Arena of Valor that are as full-featured as League of Legend is on the PC. It's no coincidence that all of the recent slate of gaming phones (from Razer to ASUS) have their roots in Asia, where there's more of a demand for them.

But the market for mobile gaming is changing in the west too. You can now play PUBG on Android, with Fortnite coming to the mobile platform before the end of 2018. These are two of the biggest games of the year, and they're in full 3D even on mobile -- Candy Crush they're definitely not. While mobile MOBAs haven't quite caught on in western markets, PUBG and Fortnite certainly have, which could very well indicate a shift away from traditional casual mobile gaming experiences into something a little more hardcore. With the rising popularity of games like these, a dedicated gaming phone might actually make sense for both the east and the west.

Now, do you need a gaming phone to play these games? Well, no. You could very well play them on your Samsung Galaxy S9 as well. Plus, these games are mostly free-to-play, and paying hundreds of dollars for a dedicated gaming phone might be a little bit much. But playing on mobile isn't always a pleasant experience. The phone might get really hot, and some of these games might need more precise controls than just a regular touchscreen. 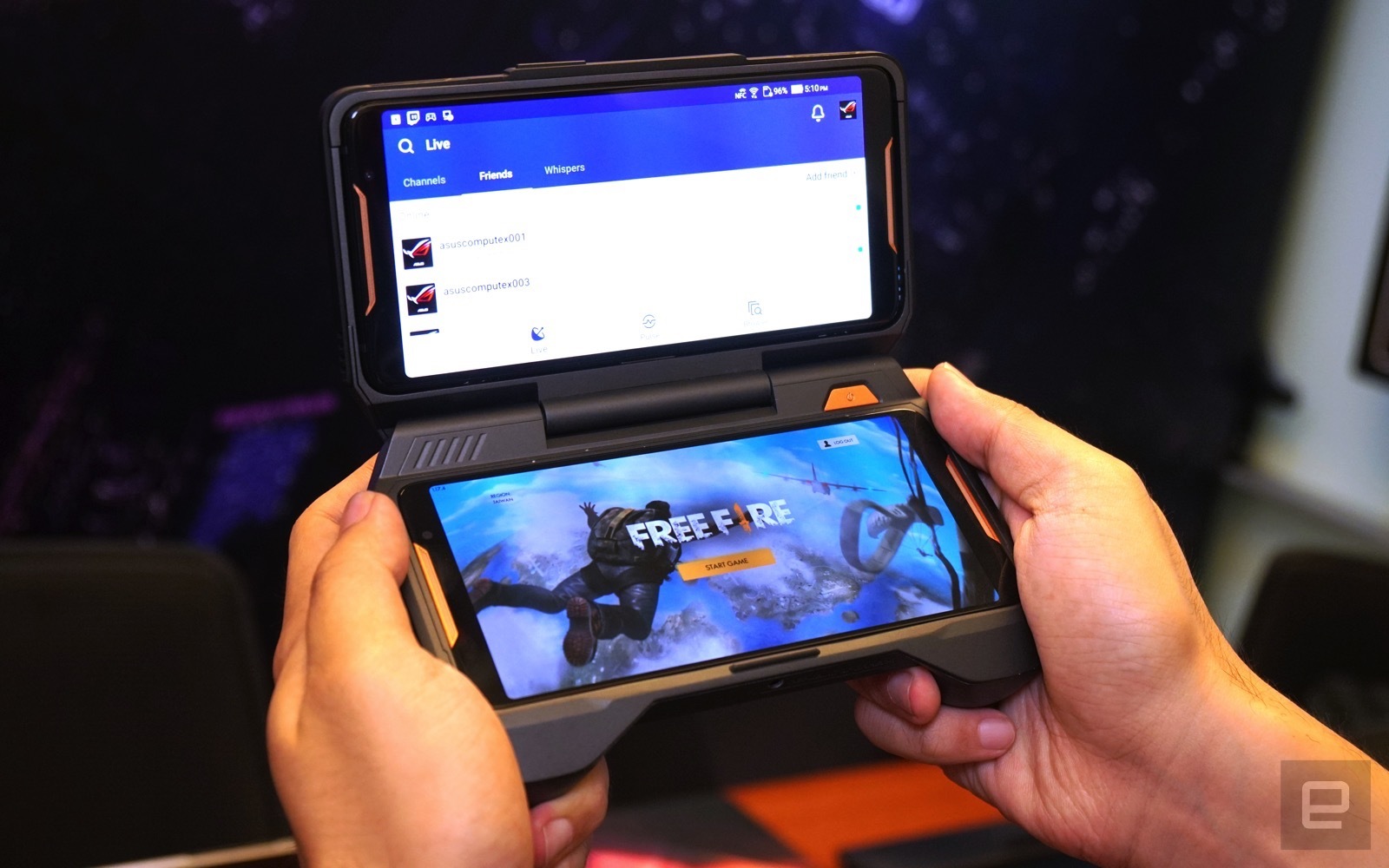 Phones like the ASUS ROG, however, solve this with the addition of extra cooling, plus it has those shoulder triggers for even more precision. What's more, it has a ton of optional accessories that do add those physical controls if you want gameplay to be more immersive. There's even a TwinView Dock that speaks to the hypothetical rise of mobile game livestreaming; it gives you a second screen so you can keep an eye on your Twitch audience reactions on one display while you battle for survival in the other. Twitch isn't exactly full of people streaming from their Android phone, but if you're going to release a crazy gaming handset, you may as well cover every angle.

Yes, the ASUS ROG might seem wild and unnecessary, but ultimately the company's goal isn't to appeal to the masses. You could argue the same for laptops -- you don't need a liquid-cooled gaming laptop to play games, but if you care about getting the best experience, then you'll cough up more for it. Even ASUS acknowledges that the phone isn't for everyone. Instead, it's for the select few who would appreciate the blown-out specs and the fact that this phone is catered for the gamer in mind. It's an ambitious endeavor for sure, and it's unclear if it'll actually pay off. But, from what we can tell so far, its future is surprisingly promising.

In this article: asus, asusrog, av, computex, computex2018, editorial, gadgetry, gadgets, gaming, gear, mobile, rog, rogphone
All products recommended by Engadget are selected by our editorial team, independent of our parent company. Some of our stories include affiliate links. If you buy something through one of these links, we may earn an affiliate commission.