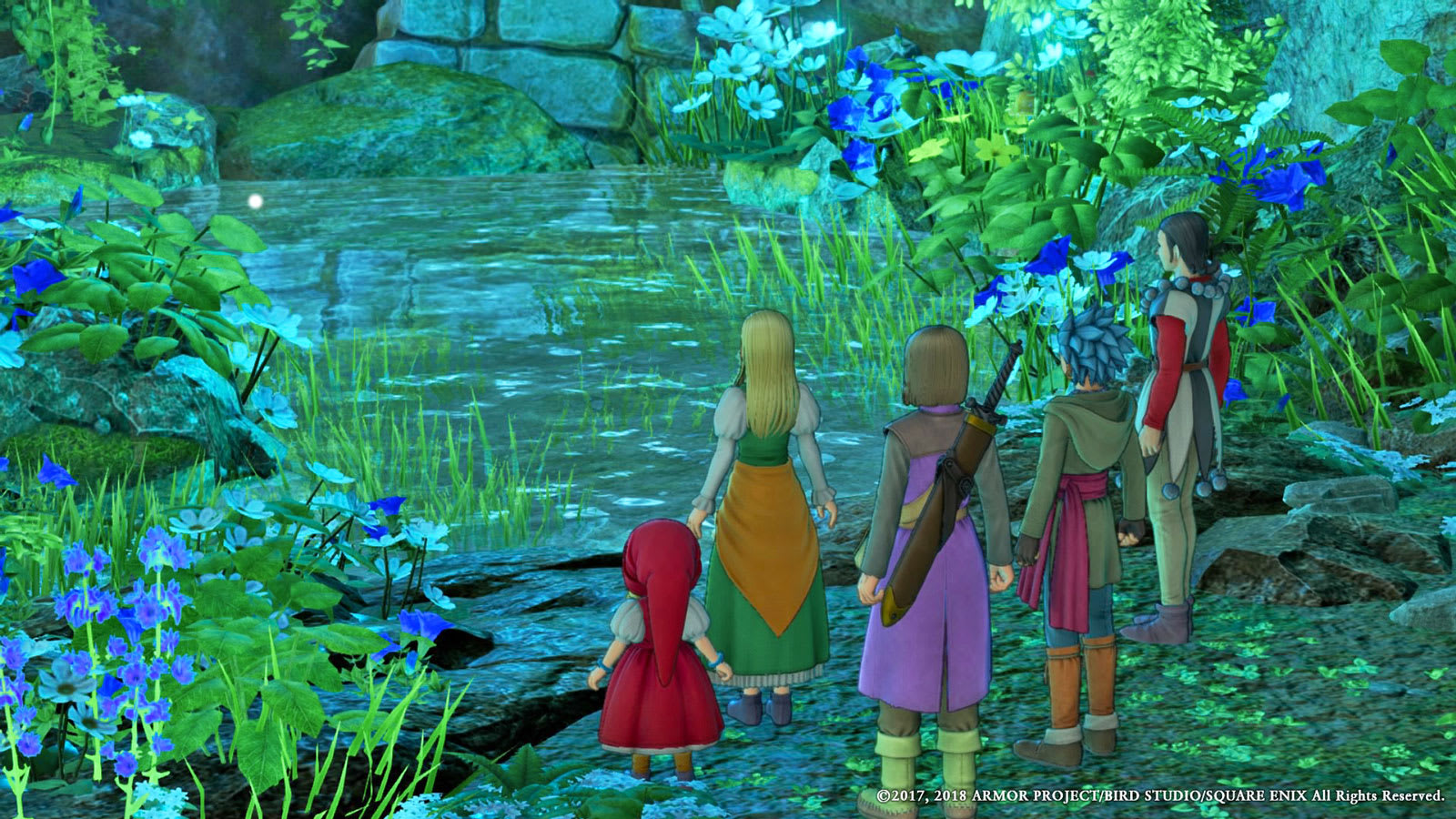 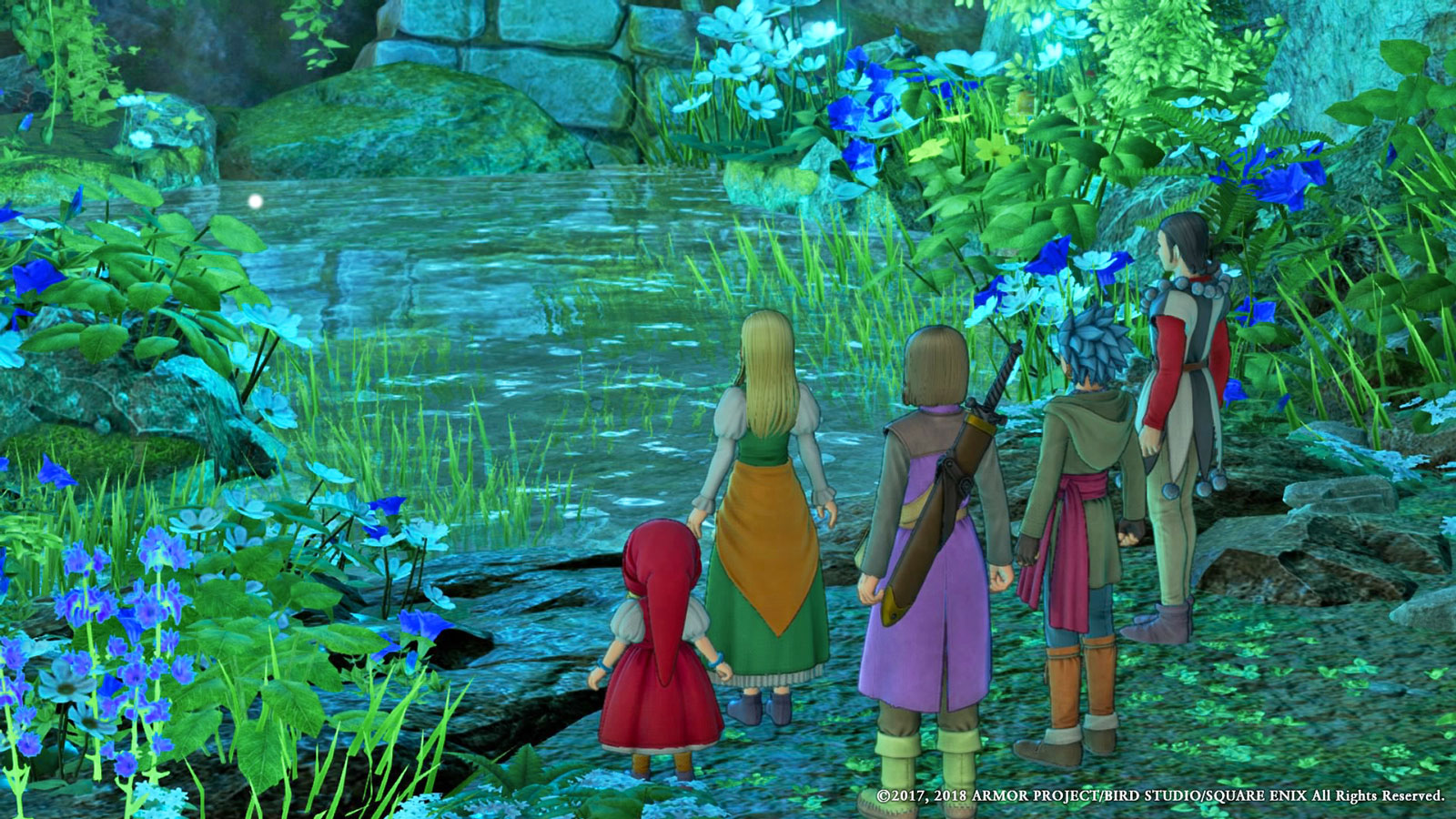 Most role playing games live and die by the characters and the stories they weave. The decades-old Dragon Quest series has reached its 11th iteration, and Dragon Quest XI attempts to both both celebrate the series so far, and court a new audience.

And if any RPG series is ripe for new fans, it's Dragon Quest. Square Enix has primed players with both its Minecraft-esque Builders series and Dragon Quest Heroes, which borrows the grand scale battles of KOEI's Dynasty Warriors series. But this is the meat-and-potatoes Dragon Quest that fans know and love. DQXI sticks to the series' formula: A silent protagonist travels the world, collecting magical macguffins and righting wrongs before felling the final-boss-that-isn't-actually-the-final-boss, and then beating the true big bad and saving the day. 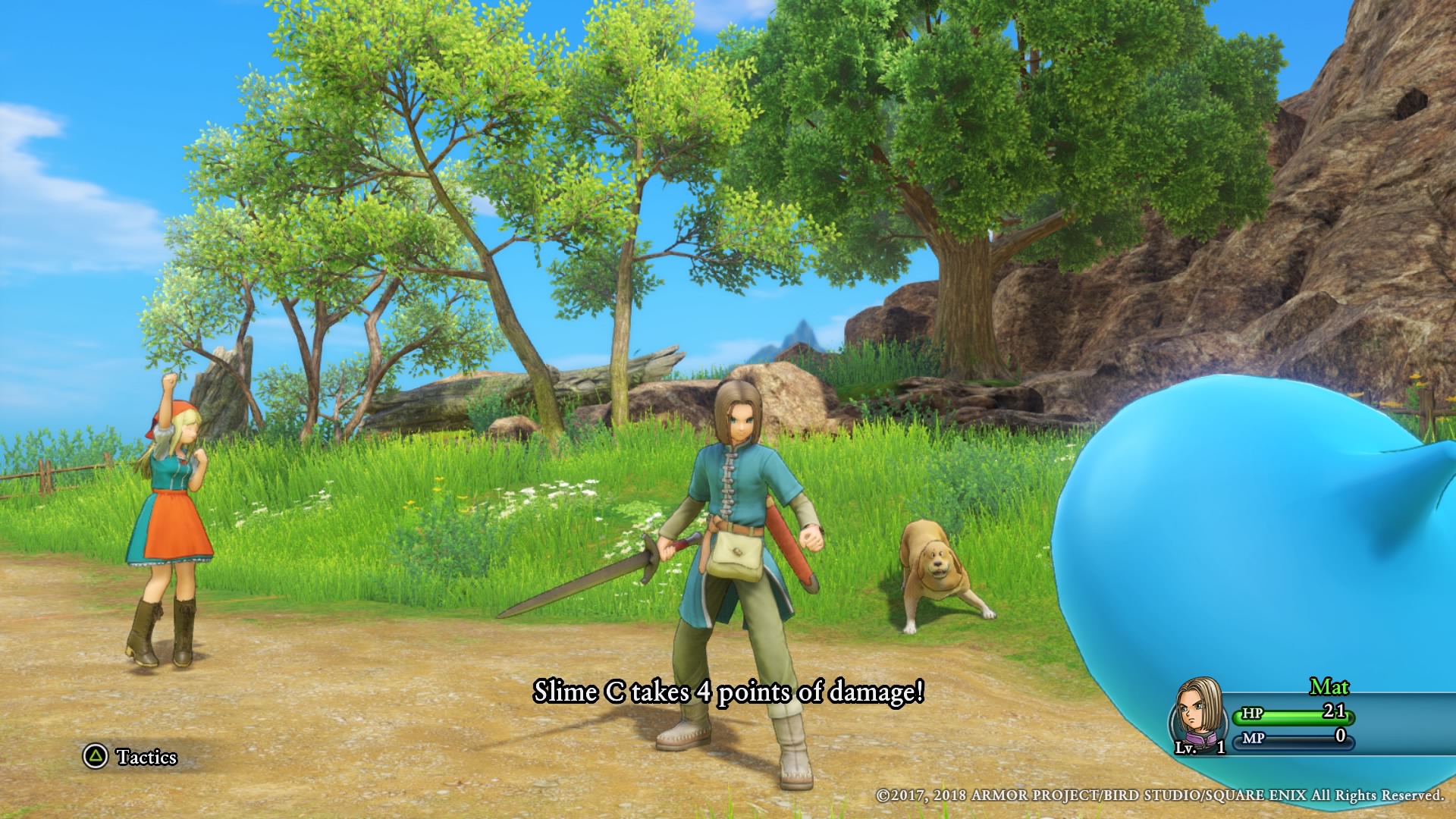 Unlike Final Fantasy XV, there's no learning curve to the battle system, and it isn't unnecessarily complicated; Attacks and skills focus on physical and elemental attacks, while the turn-based RPG system of yesteryear clings on in DQXI, which means there's plenty of time to consider your approach and no razor-sharp reflexes needed. Anyone unfamiliar to the series will still have to read the descriptions of abilities to figure out what status effects are applied, and whether you can aim it at a single target, a group of targets, or every enemy on the field. Apart from that, it's pretty easy to grasp.

The open-world to battle transitions are almost seamless: You can see other enemies in the distance, and your fights are played out exactly where you came into contact with them. There is still a brief fade-out into the battle, but I like how the world remains around you. You can also move your main character around the battlefield, although this has literally zero effect on your fight: It just makes it look cooler. (Like stabbing that giant dragon in the back -- take that.)

The open world is more expansive and prettier too. Like Breath of the Wild on the Switch, it runs the full gamut from volcanoes to idyllic sandy beaches, giant castle towns to snowy fields. It's a beautiful, worldwide adventure, and a big one that's going to take you at least 100 hours. (At least -- I'll come back to this.) 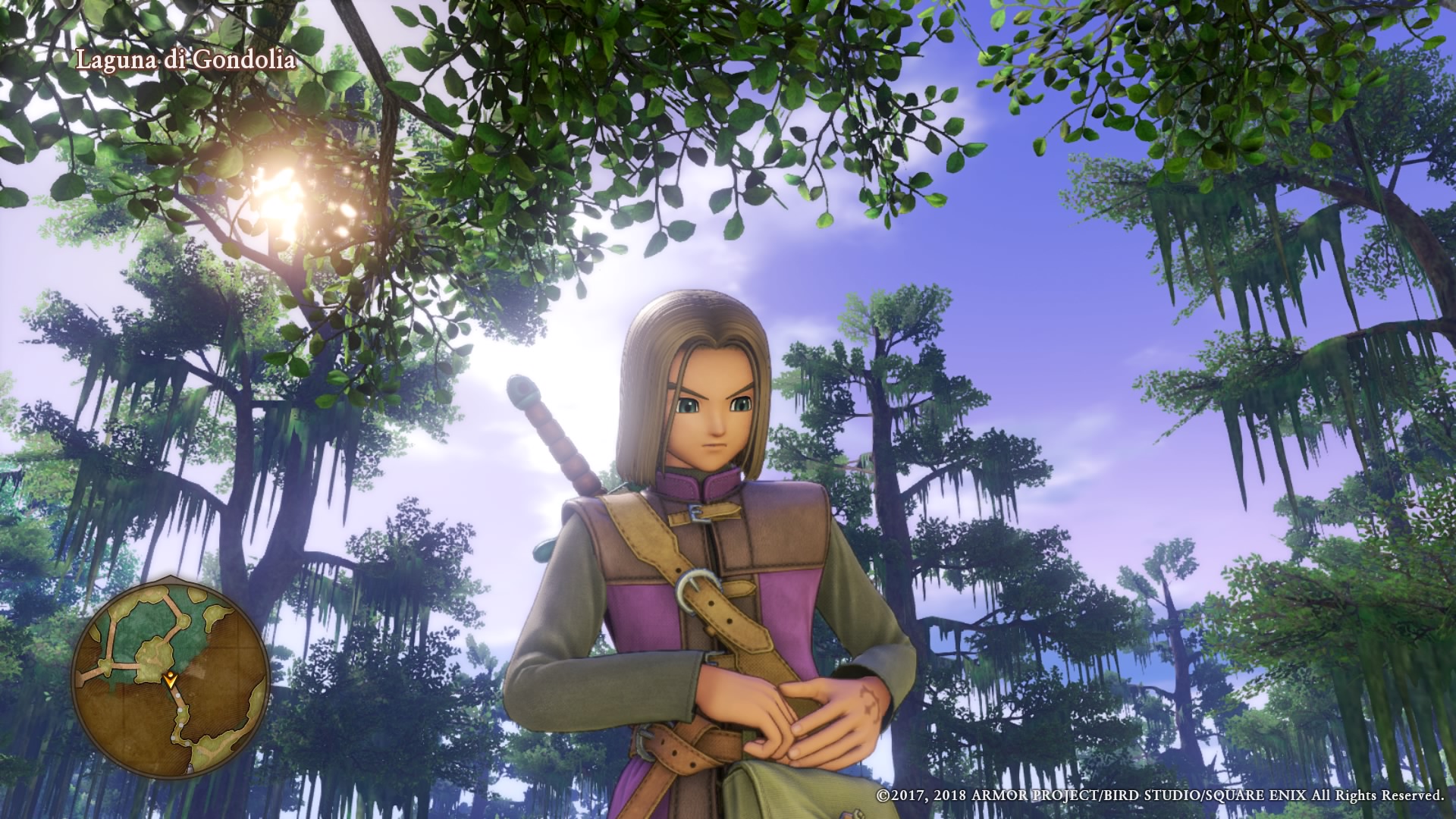 And just like DQVIII's international edition, DQXI is furnished with voice actors and a wonderfully on-point translation that's dense in wordplay and puns, demonstrating the affection and attention to detail that's gone into this game. There's the town of Phnom Nonh, which combines South Asian feel with a mysterious mural, the Blockenspiel shield attack, Stun Double team-up attack, and monsters like Sham Hamwitches (pigs in mage hats), Cruelcumbers (pickles with spears) the posing musclebound Jerkules.

These monsters! Now on more capable hardware (the online RPG Dragon Quest X originally came out on Nintendo's Wii), the monster designs -- from legendary artist Akira Toriyama, who penned the characters of Dragon Ball Z, Chrono Trigger, Dr Slump and more -- look squishy, or rubbery, or solid or shiny. And they all move like they should. I'm obsessed with how the musically inclined demons strike sassy poses to cast their curses, or the adorable tiger cubs that gambol around till you have to, well, end them, and the vacant stares and squishy motions of the slimes, in all their different sizes, forms and colors.

It's a shame then, that barring some wonderfully silly, cartoonish moments with Rab, a Scottish-accented geezer who's a bit of a sleaze, the main characters aren't given the same attention in animation and, well, personality.

It's a Dragon Quest thing that the protagonist is a painted as a mute, personality-stripped leader, but the hero's face is ridiculously expressionless throughout. When he hears the tale of how his true parents passed away, there's no frown, no tears. The hero's expression ranges from passive to slightly agape surprise. While I understand the idea is that you can play as the lead character, the slate is a little bit too blank.

Fortunately, the rest of your troupe have some emotions and intrigue. I've already singled out Rab as one of my favorites but clown-knight Sylvano is a similarly entertaining battle ally. There's also a gruff thief that knows it's fate to help you out, twin sisters that currently don't look like twins, and a beautiful spear-wielding warrior princess type. The last one gets the anachronistic bunny-girl costume -- this is still Dragon Quest. I could write far too many words on the adult (occasionally hilarious) world of 'puff-puff', or how Sylvano, the effeminate showman, is drawn as a lazy gay cliche.

In DQXI the team has figured out a more forgiving curve to game progression and bosses. Dragon Quest is notorious for its experience grinding demands and the time it took in past games merely to shore up enough experience or new weapons to be able to make a dent in bosses. This iteration is fairer in that regard and your journey across the world and through dungeons offers you enough fights to prepare you, mostly, for what you'll come up again next — this is a huge relief. For those looking for a challenge, DQXI also includes a Draconian Mode, allowing you to handicap the standard game difficulty and make things hard for yourself. I was completely fine with the standard game, but it's there, if you want it. 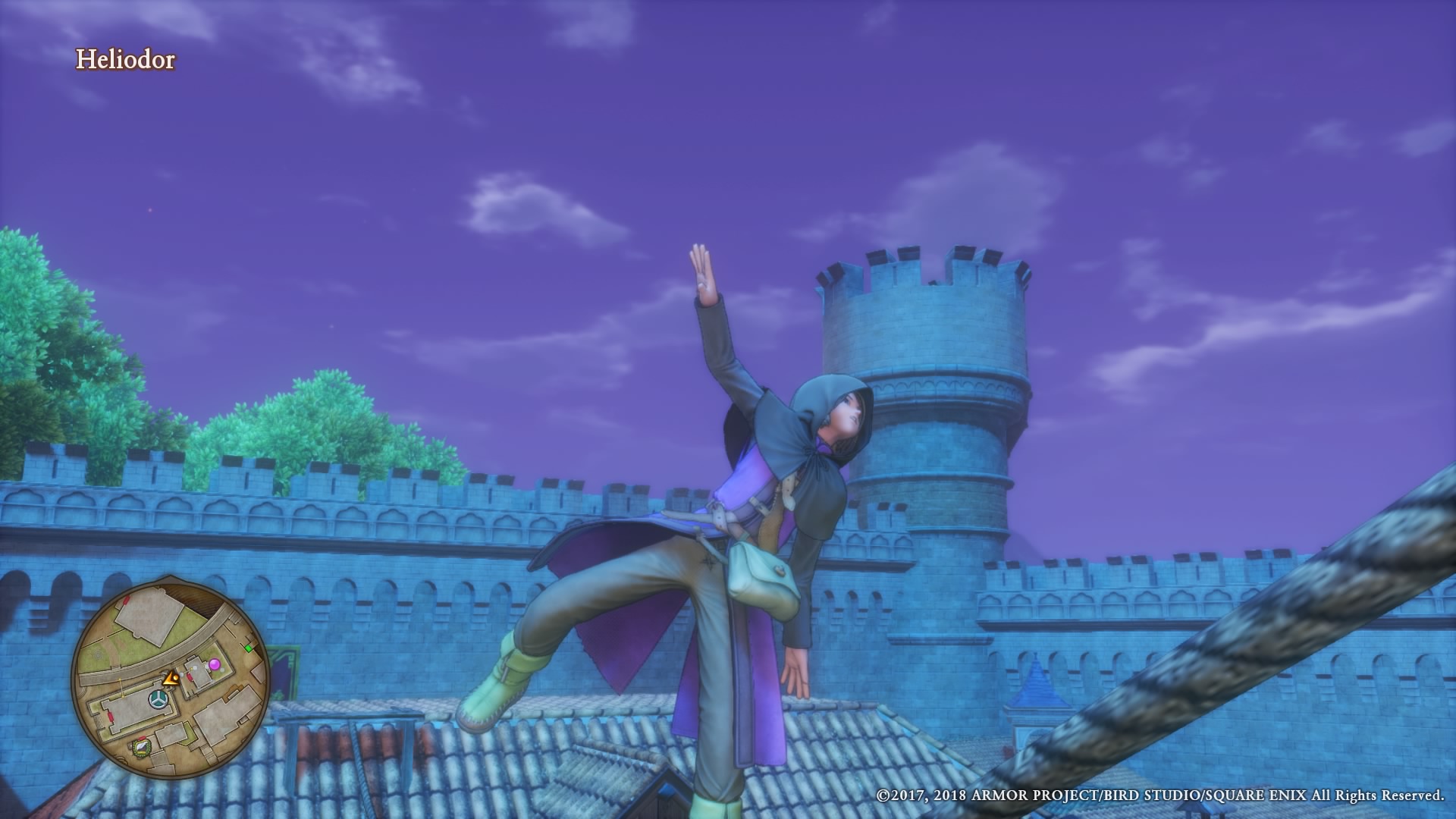 That said, I can't praise arguably the greatest part of DQXI; the post-game. No spoilers, but it's here that Dragon Quest series finally takes some risks and surprises me, taking the tale in some crazy directions as it expands beyond the credit roll. Unfortunately, Square Enix's embargo demands that reviewers keep all this good stuff (and some heavy spoilers) to themselves at launch. I'll keep it short and mysterious: The game gets far more interesting, and feels fresher, once you've beaten the big bad.

The Dragon Quest series remains an accessible RPG, but the flip side of that is that it seems a little bit too simple by 2018's standards. Persona 5 is another traditional RPG, but it keeps the gameplay fresh and streamlined. The Dragon Quest creators, however, stick doggedly to series tropes: You can only save at 'churches' or goddess statues, which is also the main way of reviving characters and removing curses if you don't yet have the necessary spells or items.

These services, barring saves, also require money. While major in-game scenes are voice-acted, most of the side-quests -- some are pretty hilarious, some are dull fetch tasks -- are text-based. All of the non-playable characters, shop owners etc. talk in staccato notes as the text scrolls on screen. It's another nod to the long-running series, but not one we really need to keep.

The musical score has barely changed. It's still strong, catchy and familiar, but in 2018, both the lack of live orchestration and the teeth-clenching high-pitch victory noises are hard to forgive. It's made even more apparent when the opening credits are accompanied by a full live orchestral score of the iconic Dragon Quest theme song. DQXI's special edition box set even comes with an entire orchestrated soundtrack: Just put it into the game. Stop trying to squeeze money out of your players.

Dragon Quest XI is the most polished, most modern iteration of the series. After the online-only DQX and the 3DS-bound DQIX, it feels a lot like the PS2's DQVIII, largely due to the more traditional adventure and the high-quality voice acting. But that came out in 2006 -- I'm not sure the series has evolved enough.

If you're a Dragon Quest fan, you'll love this. If you're an RPG fan, you'll either be frustrated or charmed. That said, you should play beyond the credits. That's when the familiar quest finally breaks new ground.

In this article: art, av, dq, dq11, dqxi, dragonquest, dragonquest11, dragonquestxi, gadgetry, gadgets, gaming, jrpg, ps4, review, rpg
All products recommended by Engadget are selected by our editorial team, independent of our parent company. Some of our stories include affiliate links. If you buy something through one of these links, we may earn an affiliate commission.