An important, nearly flawless product that raises the bar for the rest of the tech industry. 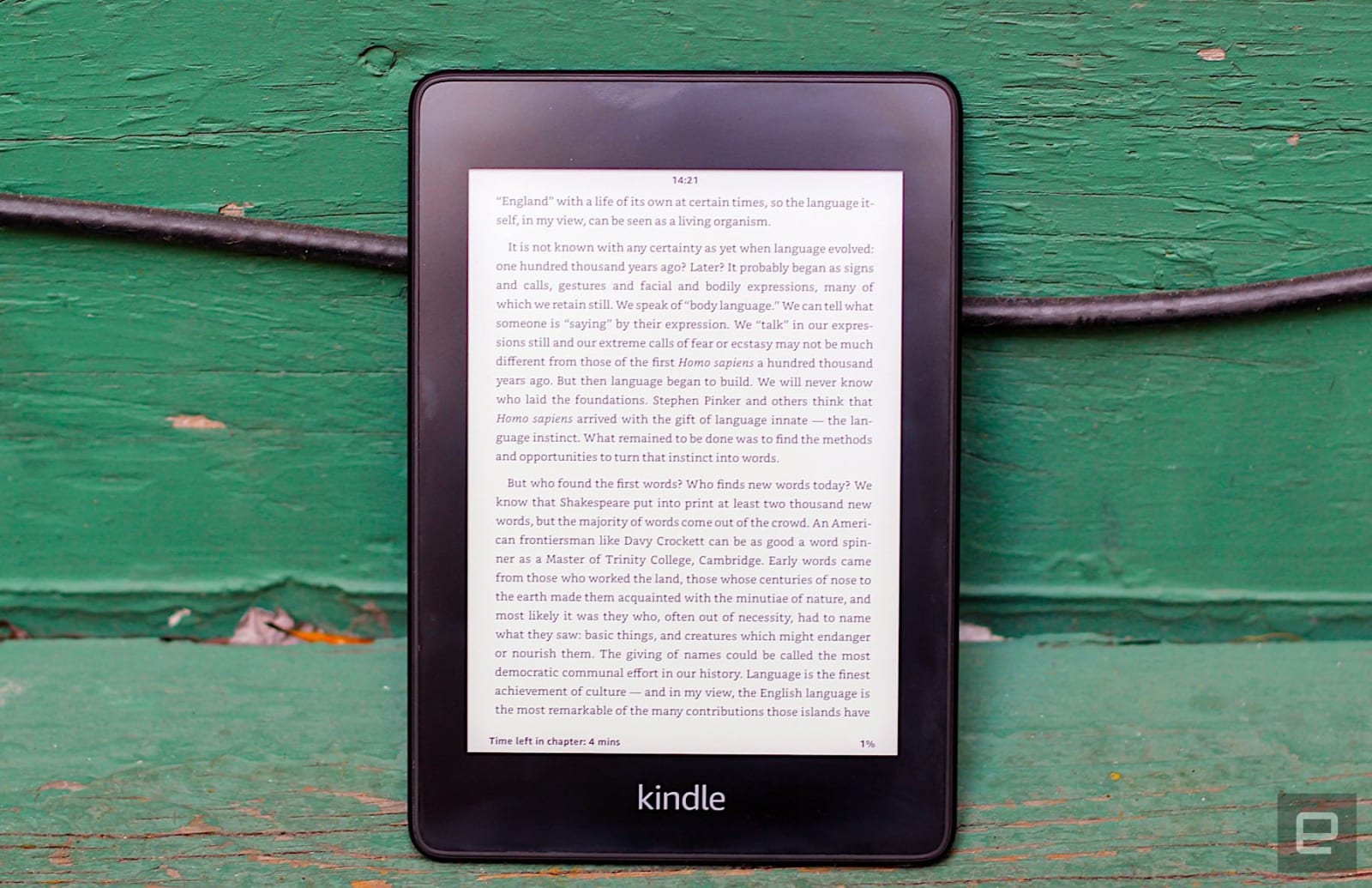 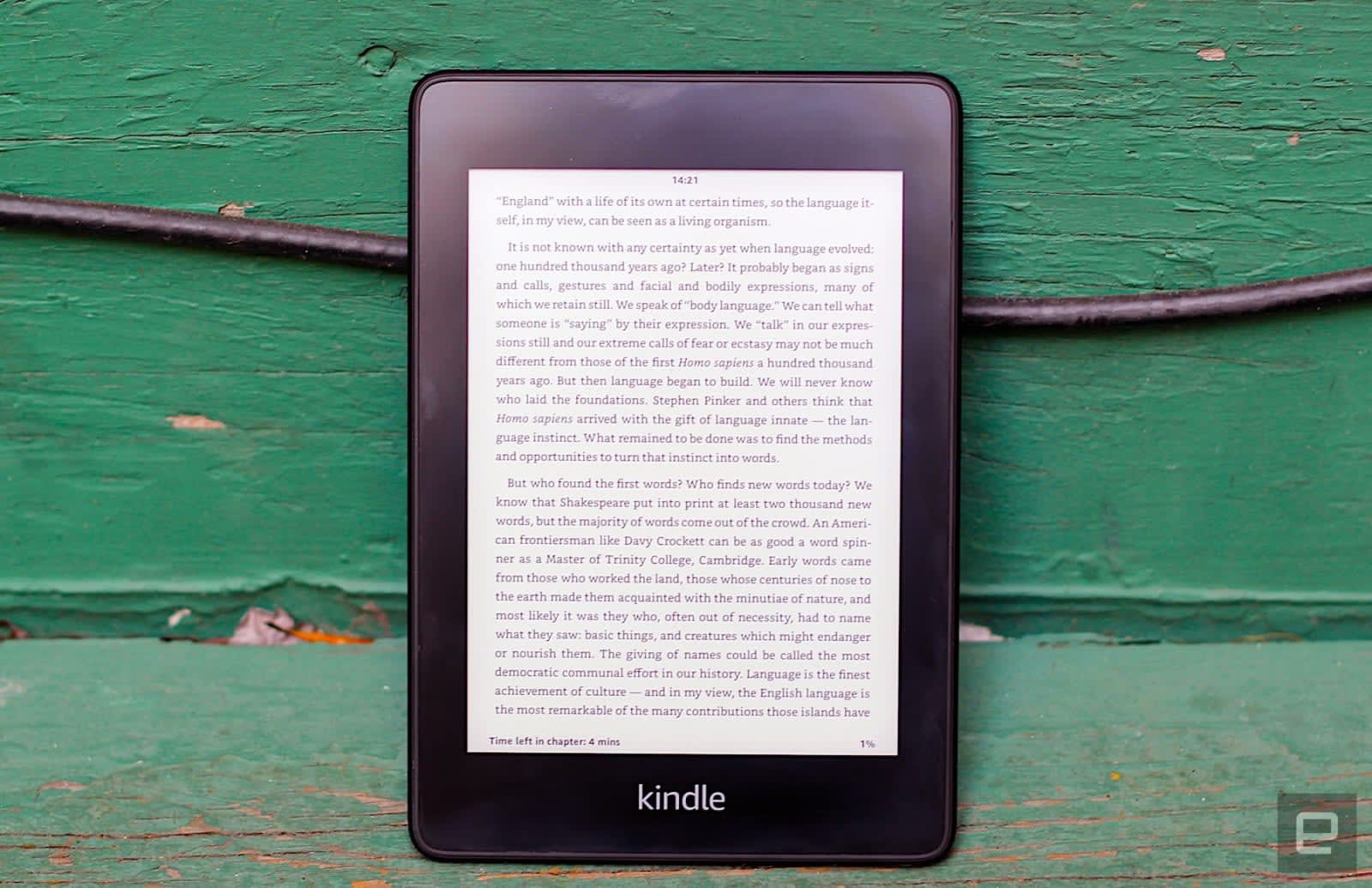 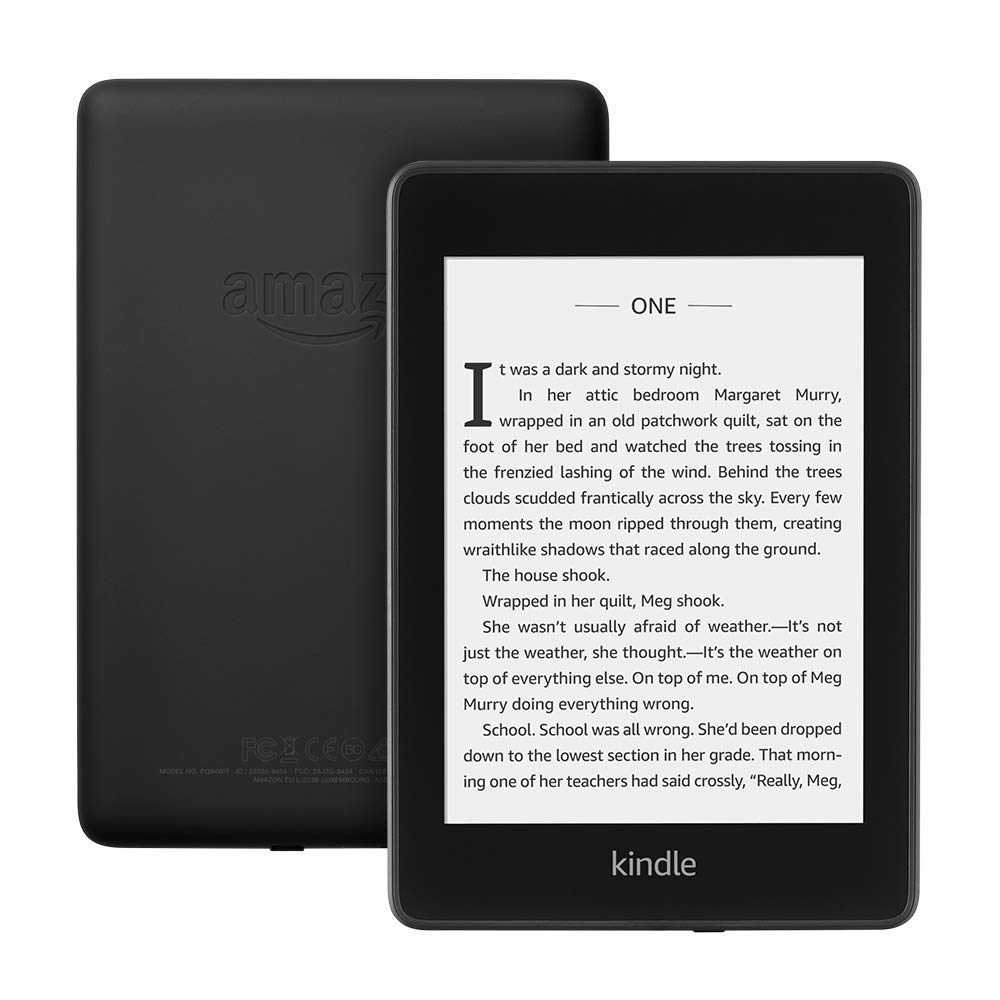 Until now, the Kindle Paperwhite had three mortal enemies: water, airplane seatback pockets (just me that keeps leaving them on planes?) and book snobs. While there's no hope for the latter, one of those issues isn't long for this world, as this year's model is now waterproof. For lovers of audiobooks, there's more good news: Amazon added Bluetooth so you can listen on the go. Owners of older Kindles may remember there used to be a headphone jack; this is 2018, though, so forget about that and embrace the future. This at least means the Paperwhite is no longer the odd one out when it comes to an audio option. (The base Kindle and Oasis both already have Bluetooth.)

Amazon’s Kindle Paperwhite has long been the go-to e-reader, and for good reason. It provides an enjoyable reading experience with enough premium features to keep most literary lovers happy. Now, with the addition of Bluetooth/Audible and waterproofing, it’s even more useful and durable than before. Skip the base model and go straight to this one.

Be the first to review the Kindle Paperwhite (2018)?
Your ratings help us make the buyer’s guide better for everyone.
Write a review

For the most part, the new Paperwhite ($129 with "Special Offers") will feel aesthetically and functionally familiar to anyone who's owned a previous model, or any recent Kindle for that matter. But that's not a bad thing: For those looking to switch from dead trees, the Paperwhite's always been an easy recommendation.

In the Kindle range, the Paperwhite sits in the Goldilocks zone. It almost goes toe-to-toe with the $250 Oasis on features (just with a slightly smaller display), making it well worth the extra bucks over the base Kindle ($80), which lacks waterproofing and has a lower-resolution display with no backlighting. 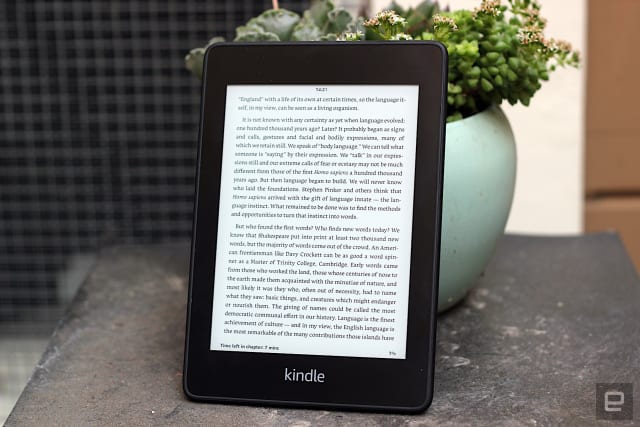 The main problem for Amazon, though, is that it pretty much nailed the core Kindle experience years ago, but still wants you to upgrade. Especially when the differences between the three main models are usually nice-to-haves, rather than must-haves.

Let's take storage as an example. The lowest-spec Kindle in the current lineup has 4GB, while the Paperwhite and the Oasis come in 8GB and 32GB versions. More is clearly better, but 4GB is still enough to store well over 1,000 typical e-books. If you read graphic novels or other larger-file formats, you can still load up more than you'd ever read on even the longest vacation.

Add in the fact that you can store all your Amazon purchases in the cloud free and extra storage suddenly doesn't seem like much of a selling point. If you really do need more space, you can upgrade to 32GB storage for an extra $30. Ah, but what about audiobooks? They're much bigger in file size, sure, but you can still store about 10 (give or take) even with a 4GB Kindle which is enough to keep you going. 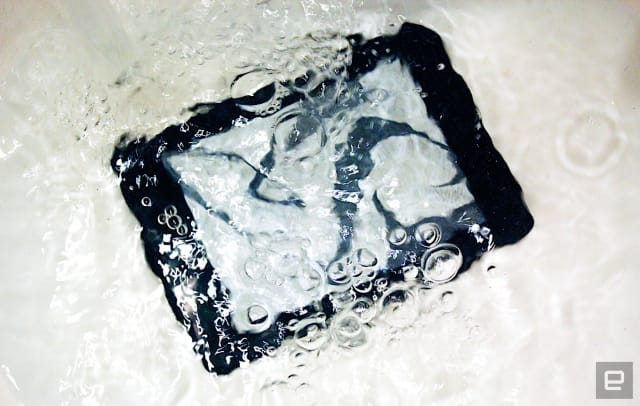 Then there's the display. Both the Oasis and the Paperwhite have 300-pixel-per-inch screens. The base Kindle now comes in at 167 PPI, but unless what you're reading has lots of images and graphics, slightly blockier text isn't an egregious experience, at least in my opinion. I do find the backlit displays on the Paperwhite and the Oasis a godsend, though, and the extra contrast they offer (i.e., a whiter background) makes reading more comfortable.

Amazon doesn't specify the battery size for any of its Kindles, instead listing it as "weeks" for all models on their respective product pages. According to iFixit, the base Kindle has an 890mAh cell, while the latest Paperwhite likely has the same 1,420mAh battery as before. The lack of backlight on the lower-spec model probably helps even out the battery life, but again, these are likely small differences that will be more important depending on your specific needs.

The two big changes (waterproofing and Bluetooth audio) are still worthy updates, though. I have never had the desire to read in the shower, but I did with this Kindle, just because I could. Small tip: Reading in the shower (or just generally when the Kindle is wet) doesn't really work, as the drops of water register as "touches" on the screen, meaning it flips pages randomly or opens menus. Of course, waterproofing isn't there so you can read in the shower or in the pool -- it's so you can read by the pool or floating on it without fear of it falling in and dying.

Bluetooth audio is of more practical use. Owners of older Kindles may remember the experimental MP3 player or the text-to-speech option. Sadly, neither of those features is present this time, but Bluetooth does have two important uses here. Obviously, it means you can listen to audiobooks from Audible, even if I'd argue the Audible app for your phone is easier for most situations. 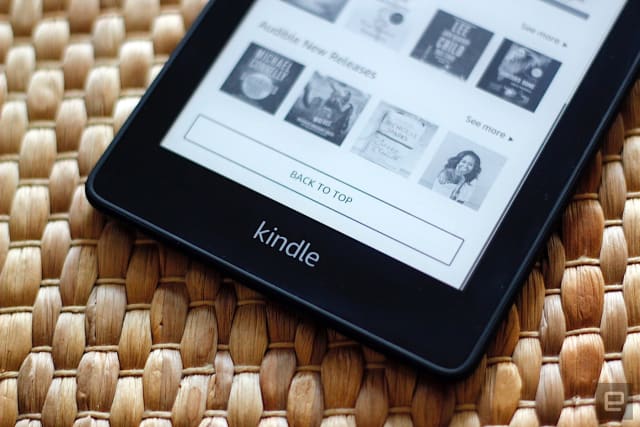 Of course, if you're looking for time away from your phone -- a primary goal of Kindle users, I'd wager -- Audible's inclusion here makes sense. A secondary benefit of Bluetooth is accessibility through Amazon's VoiceView screen reader. It won't read you your book to you, but it will give spoken feedback on anything you touch on the page.

There are some other minor hardware tweaks. The display is now flush with the bezels, which likely helps with waterproofing (but also means there's no recessed edge for hair and lint to get caught in). The overall size of this year's model is slightly smaller too, just by a few millimeters on each side. Bad news if you have a case for your old one you love (like I do) but it does make it slightly lighter and more comfortable to hold. The Kindle logo on the front is now white (instead of black) and there's no longer a slight protrusion on the rear where the USB charging port and power switch are.

As I alluded to before, Kindles have been good e-readers pretty much since the beginning, with small, incremental improvements over time. And there are some here, too. When I place both the 2015 and current Paperwhites side-by-side with the same book open and the screen set at the same brightness, the older model actually seems brighter, but the new model's display is a touch "whiter" (the 2015 model has a slight blue hue). This extra contrast on the new model makes the reading experience a touch easier on the eye.

One other (very minor) thing I noticed is that there are slight changes to the menus. For example, I often use the "Time left in chapter" setting. This option is under the font/text menu. The tab for Reading (where the setting I want lives) is now a little harder to get to. It's only one more click, but for a setting, I access often, it's an unwanted, if minor inconvenience.

It's possible this same firmware (5.10) will eventually come to the older Paperwhite (along with that minor inconvenience), but as of this writing both Kindles claim to be up to date. As nit-picky as this is, for some reason, I have found that the setting I choose under the "Reading progress" menu is prone to randomly changing, or showing nothing at all. Something that has followed me through my Kindle career. 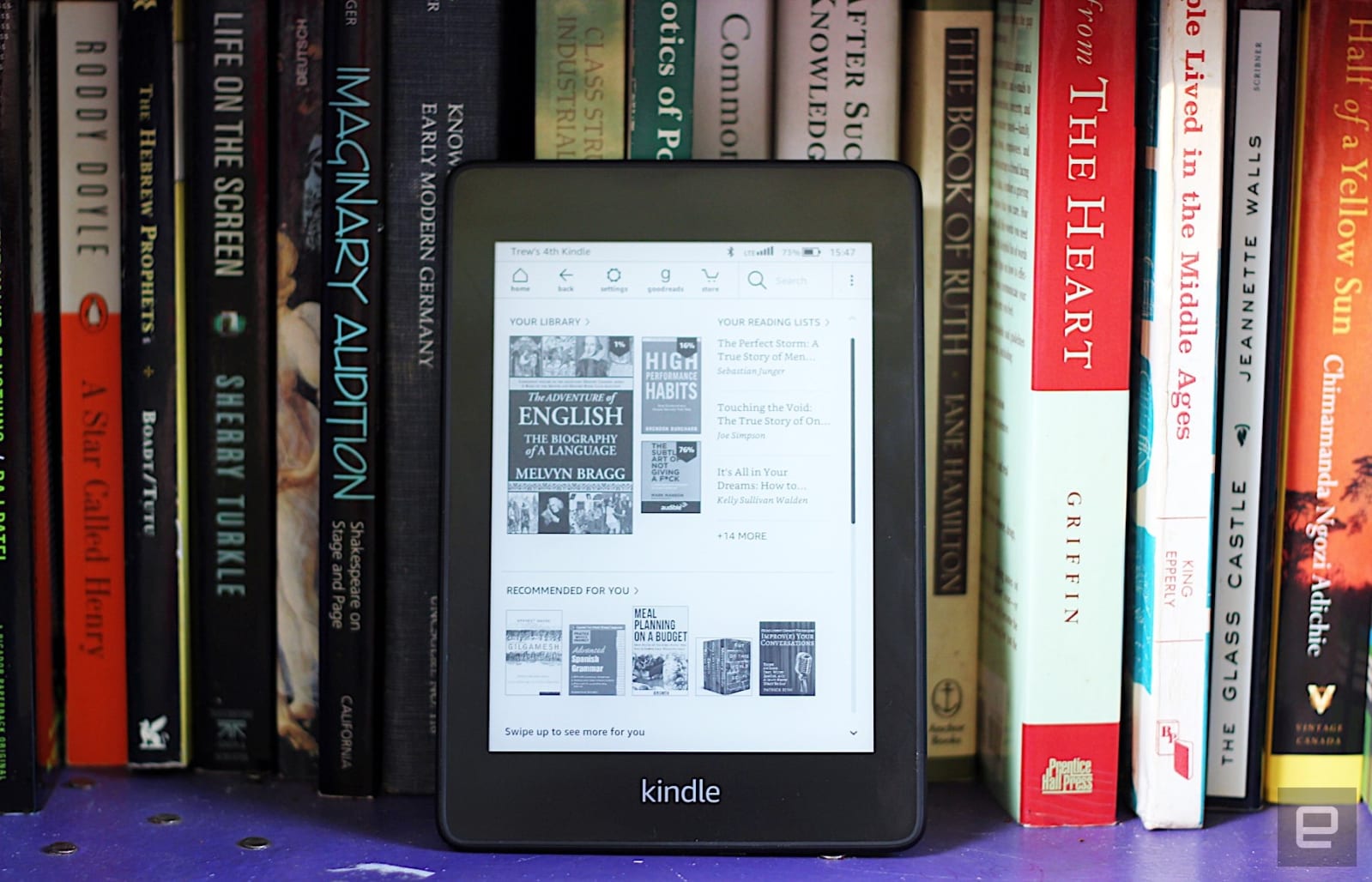 If the most negative thing I have found about the new Kindle Paperwhite is a minor inconvenience in the menus, it's fair to say it's doing a pretty good job. I may have implied that there's not a lot to differentiate between the base Kindle and this Paperwhite (the Oasis prices itself out of most readers' needs in my opinion). That changes if you want to fully load your Paperwhite. The price starts at $130, but you can add $20 straight away if you don't want the ad-supported version (you don't). If 8GB of storage isn't enough, then it's another $30 to upgrade to 32GB. And if you want the "free" LTE, that's another $70 again (making a total $250). The good news is most people don't need the extra storage or the LTE anyway.

Despite all their similarities, until the cheapest Kindle gets a backlit screen, the Paperwhite will always be my go-to. Now, with the addition of Audible and added protection against the elements, this year's model takes a good product and makes it better.

It'll be interesting to see where Amazon takes the Kindle line next. E-readers are unusual in that they only really have to do one thing, and do it well. You can make that experience more comfortable, more durable to the elements, but things like clock speeds and color gamut don't apply here, and adding extras like a camera or NFC don't make sense either. The biggest upgrade I'd like to see in the future is on price. Kindles aren't overly expensive, but they're pricey enough that book lovers can't see past the number of hardbacks they could buy instead. For the converts who just love to read, though, the new Paperwhite is an easy sell.

In this article: amazon, ebook, ereader, gadgetry, gadgets, gear, kindle, paperwhite, review
All products recommended by Engadget are selected by our editorial team, independent of our parent company. Some of our stories include affiliate links. If you buy something through one of these links, we may earn an affiliate commission.