An app lets you adjust how it fits around your foot, change its LED colors and more.
E. Alvarez|01.15.19
@abcdedgar

We knew they were coming, but Nike has officially introduced its first self-lacing basketball shoes, the Adapt BB. These new sneakers are designed to provide a "truly customized fit for every basketball player," according to the company, thanks to a power-lacing system called FitAdapt that can be adjusted manually or with a smartphone app. The sportswear giant says that over the course of a basketball game, a player's foot can expand almost a half-size, which can affect their comfort level and ultimately have an impact on their movement and performance on the court. That's the problem Nike is looking to solve with Adapt BB.

Nike's VP Creative Director of Innovation, Eric Avar, says the company chose basketball as the first sport to showcase Adapt (and its FitAdapt tech) because of the demands that hoopers put on their shoes. Giving players the ability to quickly loosen (or tighten) their sneakers during a game, he said, is a key element that the sportswear giant believes "will improve the athlete's experience." Adapt BB is essentially a step up from Flywire and Flyknit, two fabric-based technologies that were created to offer individuals the feeling of a custom fit in sneakers and apparel.

The highlight of Adapt, which Nike is calling its "most advanced fit solution to date," is that you can control its power laces manually via physical buttons on the shoe or a companion app on your phone. When you put on the Adapt BB, the built-in custom motor with trained gears senses the tension needed by your feet and adjusts itself accordingly to keep each foot snug in the shoes. Nike says its new lacing system can create 32 pounds of force, about the same energy needed to pull a standard parachute cord, allowing it to stay locked in through any range of movement from a player.

Naturally, all this tech requires power, so you're going to have to charge the Adapt BBs eventually. According to Nike, the shoes can last up to 14 days on a full charge. It takes about three hours to get to that point, after you place them on a Qi wireless charging mat that comes with every pair. 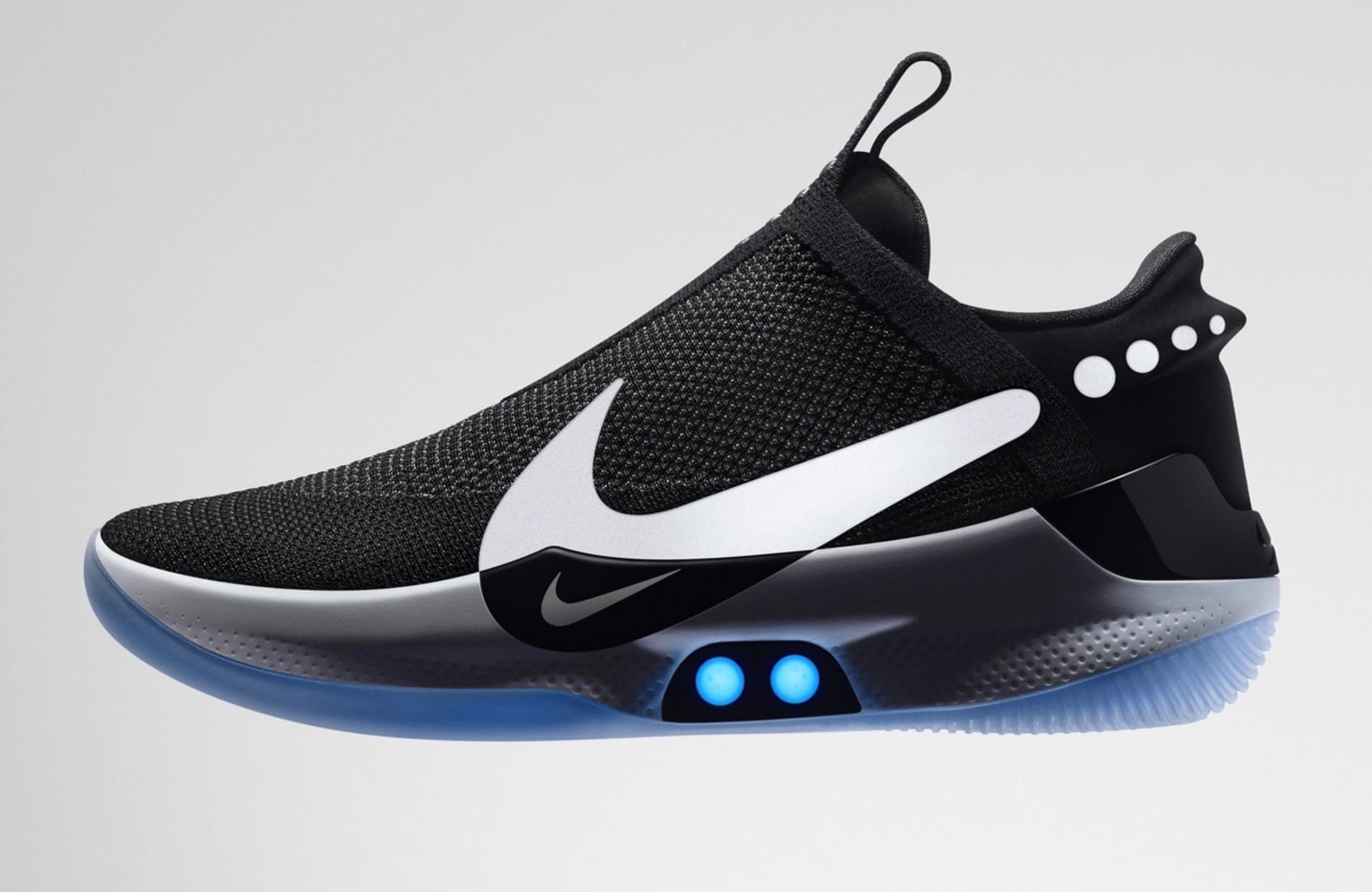 With the companion Adapt mobile application, players are able to input different fit settings over the course of a game, as well as check the sneakers' battery and change their LED colors. The other benefit to having wireless connectivity in the Adapt BB is that it will support firmware updates, which means it is expected to get extra features and improvements down the road. For instance, Nike says it's working on a way to give NBA players different tightness settings for warm-ups, and they'll be able to opt-in to these updates to get them as they become available.

The goal with those customization options, Nike says, is to sharpen the precision fit of the Adapt BB for athletes, along with giving them access to more "digital services" over time. A good example of this is Save Your Fit, which will let players use the app to lock in their preferred settings for the power laces. And if that doesn't workout for them, then they can always adjust their power laces at their own discretion via manual touch. It's good to have alternatives.

Of course, the Adapt BB wouldn't have been possible without the HyperAdapt 1.0 from 2016. That shoe was more of a multipurpose model, but it showed Nike was capable of making a self-lacing shoe for consumers -- not just a limited-edition Back to the Future Air Mag that sells for upward of $65,000. Better yet, with the Adapt BB, Nike was also able to bring the price down to $350, which is much easier to swallow than the $720 that the HyperAdapt 1.0 cost when they launched two years ago.

Nike says Adapt for basketball is just the start, as it plans to bring the technology to more sports in the near future (watch out, Puma). For now, if you want to get a pair for yourself, the Adapt BBs are set to arrive at the beginning of February.