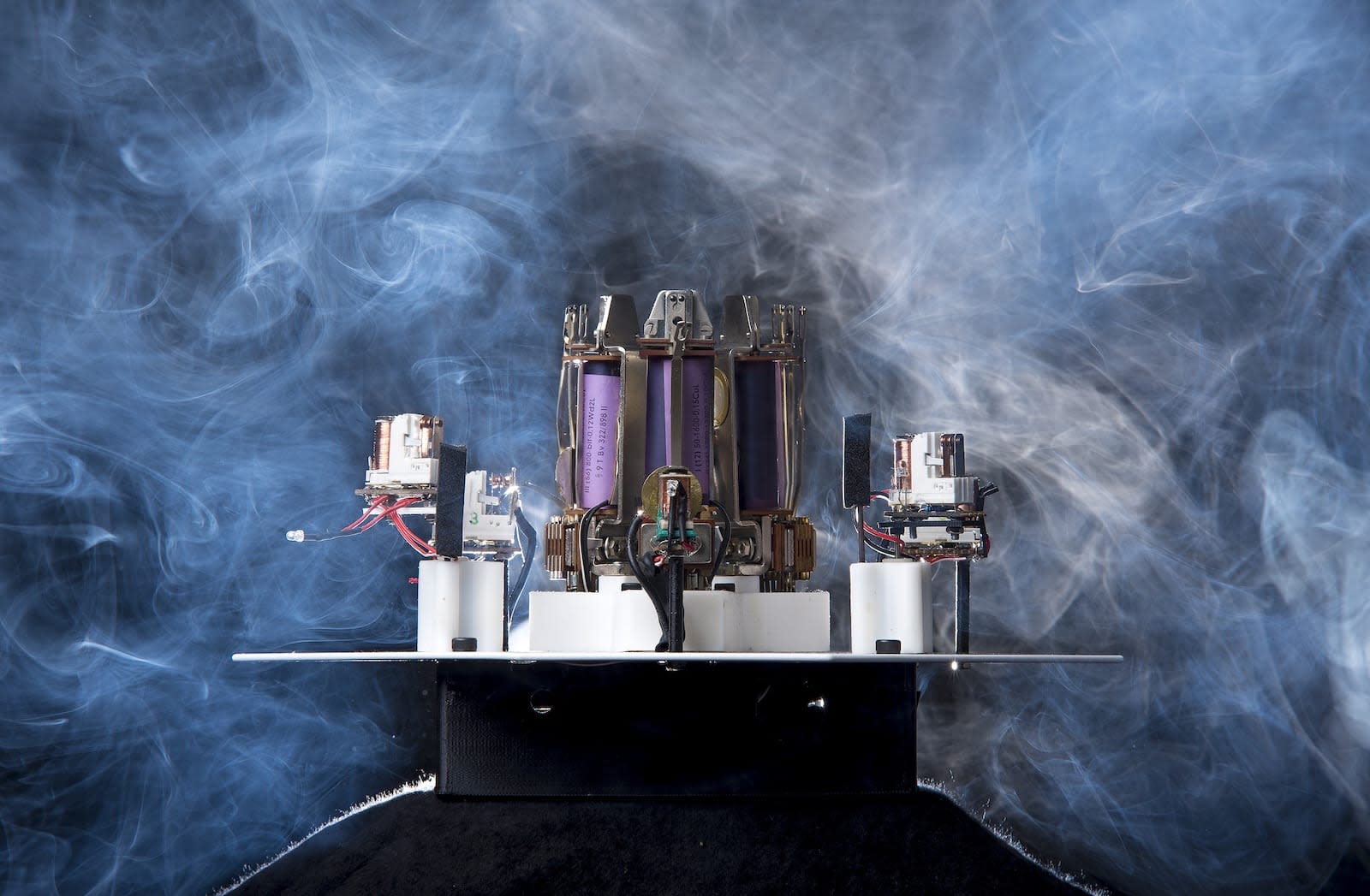 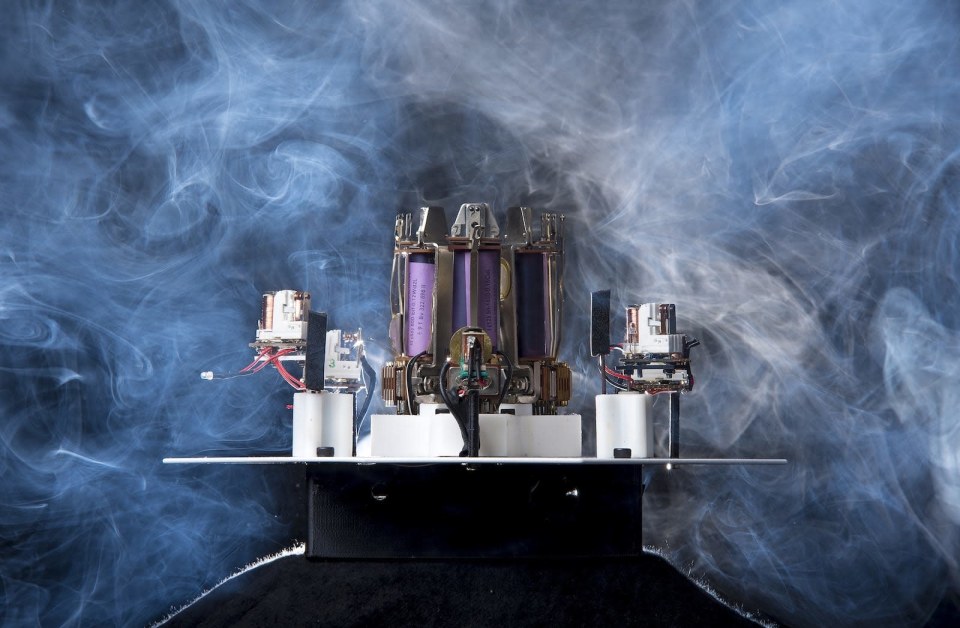 In 2012, Moritz Simon Geist left a promising career as a research engineer in Germany to build robots and travel the world playing music full-time. He'd studied classical music in school, starting with the clarinet and piano, and toured with punk bands since he was a teenager in the '90s. That was when he started tinkering with equipment, building cheap solutions for complex audio problems and creating brand-new tools.

Eventually, Geist's aptitude with electronics and music transformed into a new beast. Today, he's a solo artist who plays robots as music, relying on physical motion and contact microphones rather than electronics to create his beats. He replaces instruments with objects like air-pressure valves, tapped glassware and buzzing drone engines against guitar strings.

"It was kind of the best decision in my life," Geist told Engadget at SXSW. "I can only encourage everyone to do the same, if you have the security for it."

Oh, and he started a 3D printing company at the same time. All of Geist's academic, aural and automation interests coalesced into a single goal to make art and music full-time, and seven years ago, his chosen career started with a bang. He built the MR-808, a giant replica of legendary Roland TR-808 drum machine. But in Geist's version, all of the sounds were made by robots interacting with physical objects.

"This was kind of a viral hit on the internet, a small one," Geist said. "But basically, it's an installation that's pretty big, it's two by three meters. It replicates all the sounds from the small drum computer, only big scale. I was at a lot of festivals, museums, galleries. Basically I just got to travel a lot and tour."

Geist plays his robots both manually and with a MIDI controller. It's impossible to differentiate his songs from traditional electronic music, just by listening, but each one supports a chorus of rich, deep and crisp sounds. There's mystery in Geist's music. It's heady, ASMR-infused dance music -- there's something special happening here, but it's not immediately clear what.

"When I'm searching for new sounds and new robots, I'm thinking of like, I need this sound in music," Geist said. "If I would make my track in the computer, I would need like a hi-hat or whatever. So I'm thinking, how could this be done in the real world? OK, a noise like tshh. How does this happen here? And then you easily come to pneumatic air-pressure things."

"Have an open eye to the world and see structures, get inspired, connect the dots."

The robots have secrets of their own. It takes Geist an average of four months to put together a robot for touring, which includes instruments made out of printed circuit boards, 3D-printed kalimbas, flashing LEDs and pneumatic valve systems. Each robot is custom, and they all have visual elements of some kind. The air-pressure machine that serves as a hi-hat, for instance, includes a series of tubes filled with small white styrofoam balls that bounce up and down with the air flow. At first blush, it looks like the tiny spheres themselves are making the tshh noises, but listen closer, and it's clearly controlled bursts of air pressure.

"I think it's very important to just have an open eye to the world and see structures, get inspired, connect the dots," Geist said. "See structures where you think, OK, I could really use this and just like turn this into a metaphor for whatever. This is super important."

Geist, who teaches a class on the evolution of technology and society at NYU Berlin, is convinced robots will only become more integrated into the music industry as time passes, just as they're infiltrating wider society. Robots and artificial intelligence are tools, he said, and like any tool, they're neither inherently good nor bad. It all depends on how we use them. 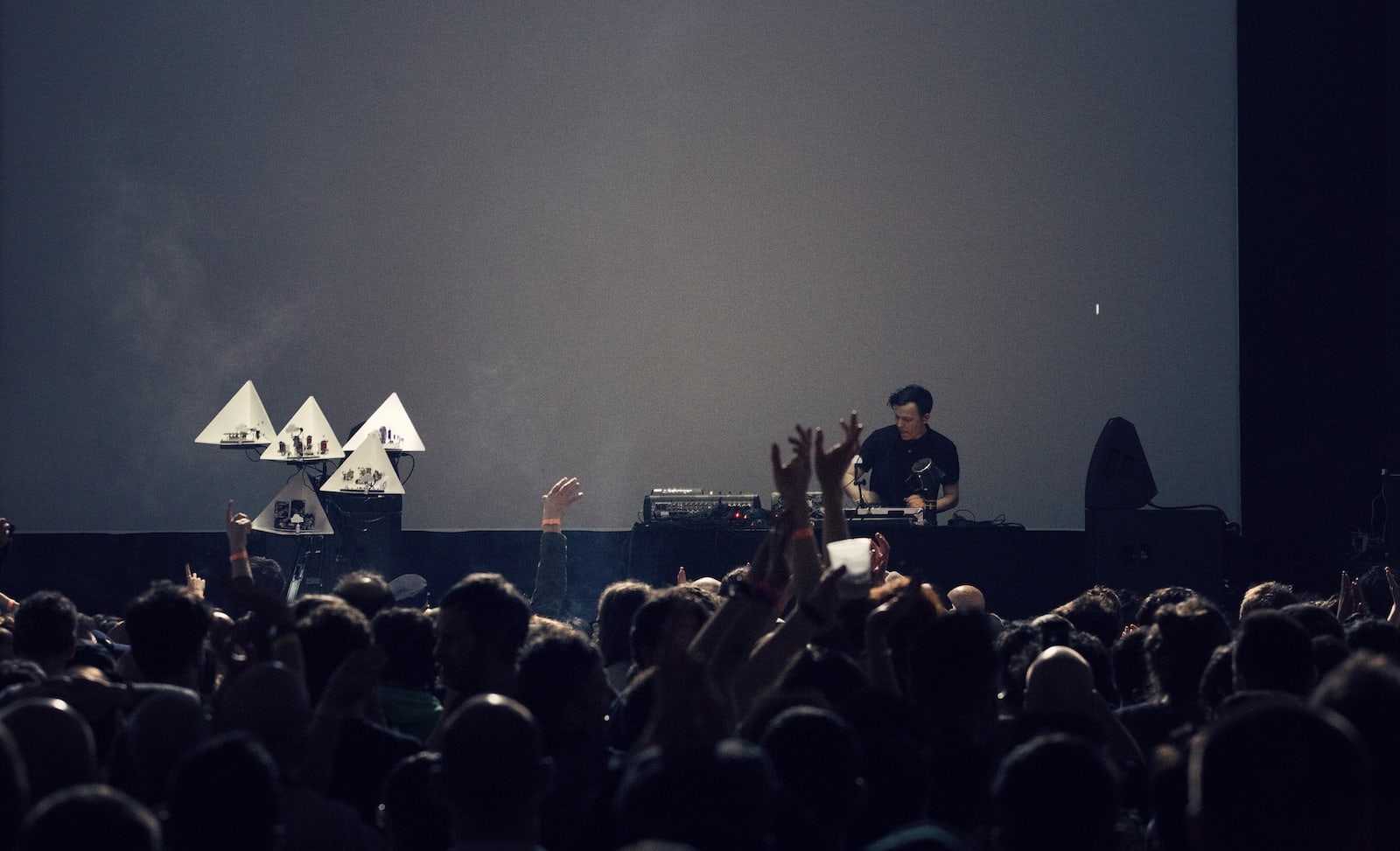 "As humanity, we started off with hammers and really crazy stuff to extend our capabilities of a human being," Geist said. "I mean, robots and artificial intelligence -- the robots are made for the body and the algorithms are made for the brain, so there's this duality. This is an extension of our capabilities in the world and the interaction between us and the world, physically and metaphorically." He paused and laughed. "What was the question?"

Geist's coming EP is fittingly called Speculative Machine and it's a soothing, booming, four-track exercise in resonant bass and tinkling metal. Even as he helps craft the AI-powered takeover of the music industry, Geist isn't concerned about the robots he builds taking his job. Already there are programs that will generate copyright-free songs for people to use in personal projects, podcast intros, Kickstarter campaigns or trailers -- functional music. However, music is as much emotion as it is carefully placed rhythm, and a song with any staying power will require that human connection, Geist said.

"The step from functional music to music which is emotionally connected to this, kind of like pop music, that's a big leap," he said. "It might take a while until this is replaced. I don't think it's so easy, because in the end, humans are needing something they can connect to emotionally. For me, AI is very difficult to do this in a whole in the pop music scene. ... This emotionality -- humans are very, very good in detecting the smallest, subtle changes."

In this article: 3d printing, art, av, entertainment, interview, Moritz Simon Geist, music, robotics, robots, SXSW2019
All products recommended by Engadget are selected by our editorial team, independent of our parent company. Some of our stories include affiliate links. If you buy something through one of these links, we may earn an affiliate commission.