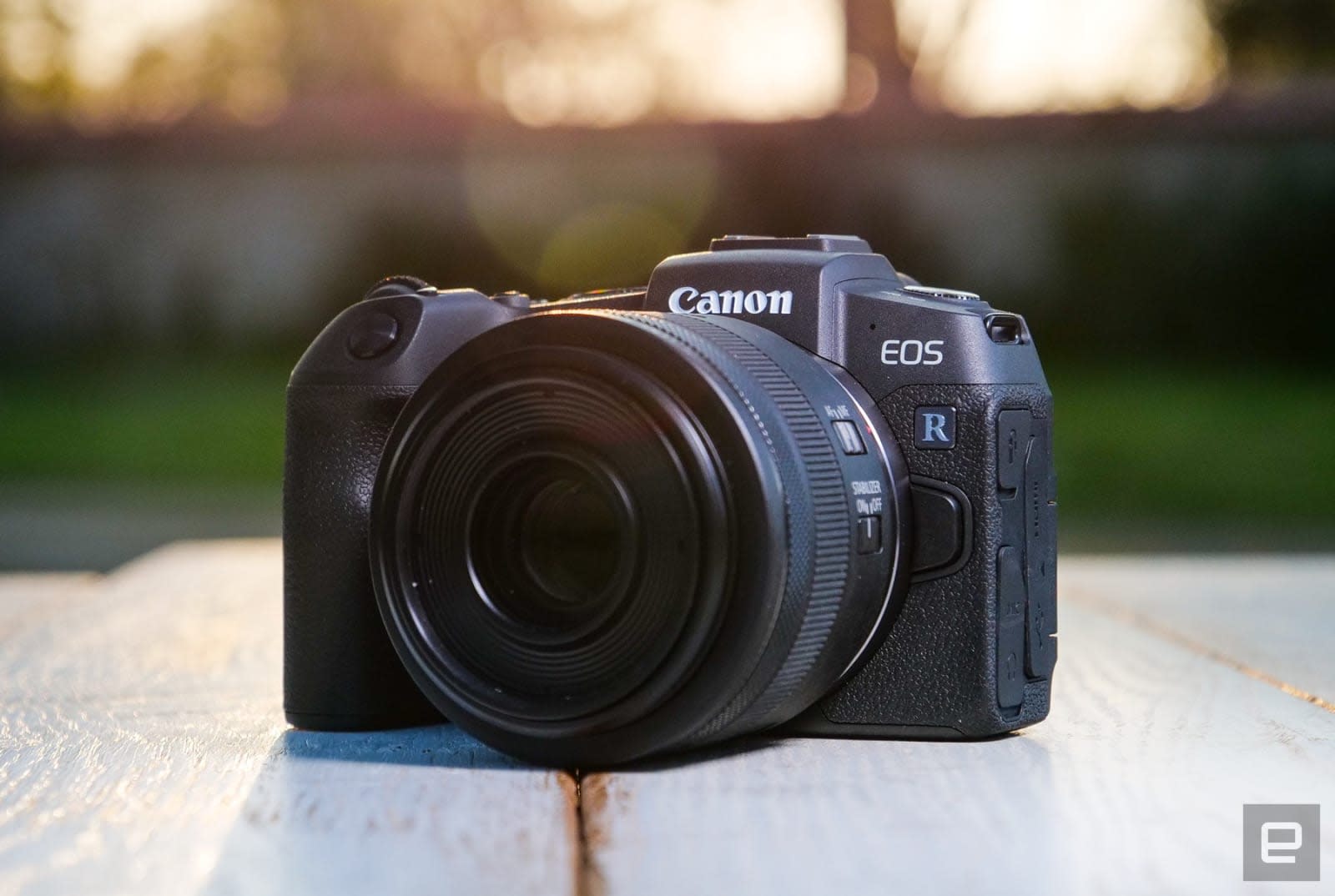 Canon EOS RP review: A full-frame camera that cuts too many corners

It’s the cheapest new full-frame mirrorless camera out there.

Canon's new full-frame mirrorless RF system looked incredibly promising, but it got off to a rough start with the launch of the EOS R, a camera that was missing key features next to rival models from Nikon, Sony and Panasonic. Rather than introducing a better flagship model, however, Canon took the opposite approach. It launched the 26.2-megapixel EOS RP, the lightest and, by far, the least expensive new full-frame mirrorless camera on the market.

It's great to have a cheap full-frame mirrorless option, but the problem for Canon is that it only has one affordable RF lens option, and the other two pieces of glass are nearly twice as expensive as the camera itself. And while it's lightweight, portable and has a flip-around screen, the EOS RP is missing several key features, like in-body stabilization. For $1,299, does it truly deliver in value compared to other full-frame mirrorless options?

As I've said before, Canon made a wise choice by introducing a new large mount that will let it build smaller, sharper and faster glass. It introduced two very interesting lenses right off the bat, the incredibly fast RF 50mm f/1.2 prime and RF 28-70mm f/2.0 zoom lenses. The problem is, they cost $2,299 and $2,999 respectively, way more than the cost of the EOS RP's camera body.

This year, Canon will release six more lenses, but those are likely to be costly, too. More should arrive next year, hopefully including a budget-oriented kit zoom.

It feels just as small in hand, though it's much easier to grab and use than similar-sized APS-C cameras, like Sony's A6500. If you really have small hands, Canon actually offers the EG-E1 Extension Grip that increases the height of the camera. With the smallish RF 35mm F/1.8 lens, I had to test it with, I was surprised to find that the EOS RP could actually make a good street-photography and walking-around camera. There are some things holding it back there, however -- more on that shortly.

Also, that size comes at a cost. It's not weather sealed like the EOS R, though given that it's aimed at casual shooters rather than pros, that's not a huge deal. However, it also lacks in-body stabilization, which effectively reduces its low-light shooting capability unless you have a stabilized lens. On top of that, there's only a single UHS II card slot and a tiny battery that delivers just 250 shots to a charge. So, you'll want to buy extra batteries for the EOS RP (at $49 a pop), which once again reduces the value proposition.

As I've found with most other Canon cameras, the EOS RP feels and handles great. It features front and rear dials to adjust the shutter and aperture settings, along with a front lens dial (assuming you're using an RF lens) to change the ISO or whatever else you want. Other dials and settings are well placed, and everything is programmable, so you can customize it to a T. The only button I really missed was a focus-point joystick (available on Nikon's Z6 and the Panasonic S1) -- I had to use the multifunction pad instead. 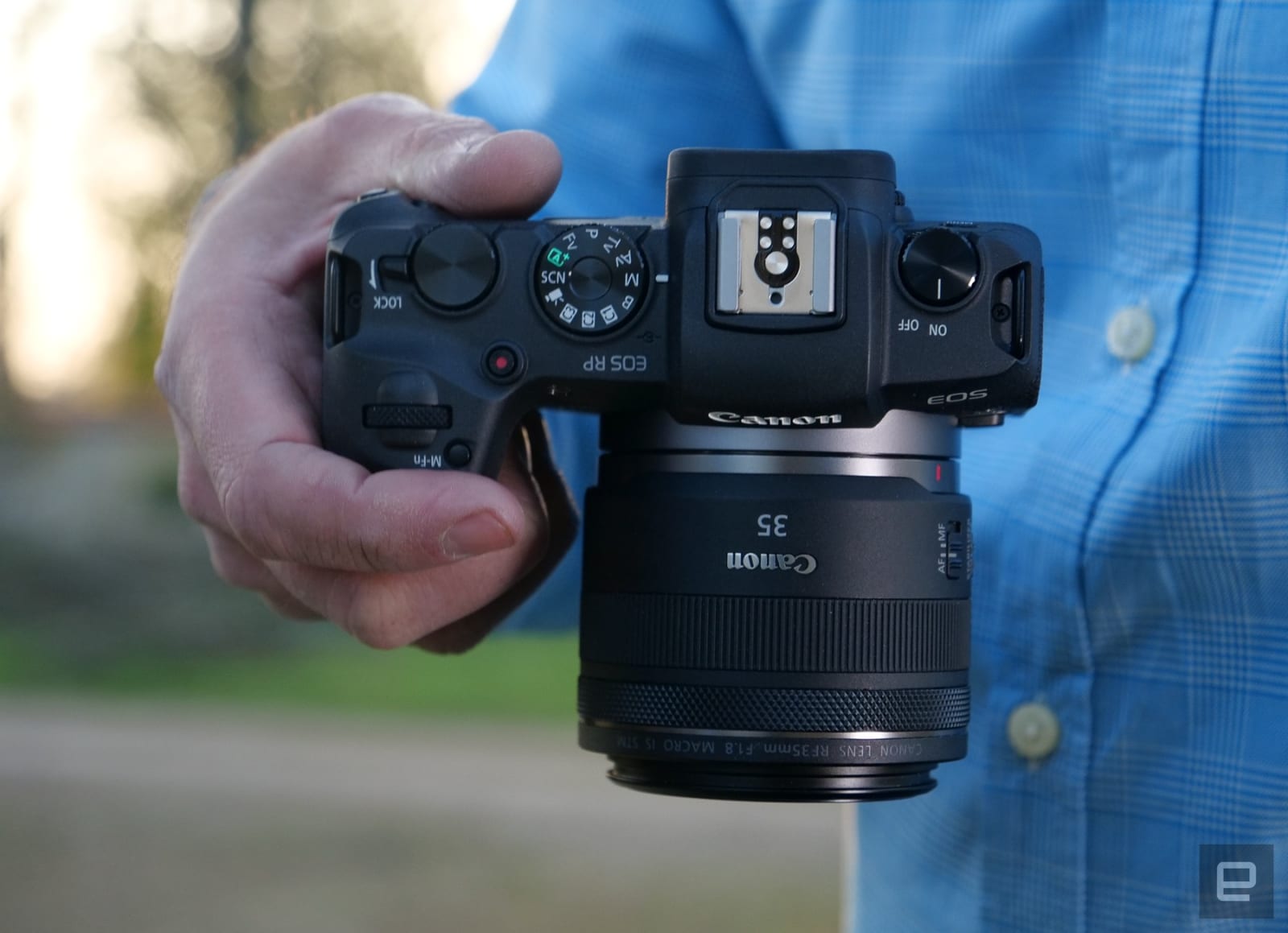 The rear touch display flips around, which would make the EOS RP a great vlogging camera -- if it wasn't for some very annoying flaws. You can use it to control focus and menu functions, making it more useful than the touch display on other mirrorless models (ahem, Sony A7 III). That menu system is pretty intuitive, though not quite as fast to use as, say, Panasonic's S1/S1R. As for the OLED electronic viewfinder (EVF), it's a 2.36 million dot 60 Hz model. which is inferior to the 3.6 million dot version on the EOS R. It is the same as Sony's A7 III, however.

As for the ports, Canon has you covered. The EOS RP packs both headphone and microphone jacks, making it much more useful for shooting video interviews. While you're limited to a fiddly, easy-to-dislodge mini-HDMI port, it's equipped with a USB Type C port that delivers fast data transfers and can be used to charge the camera.

One other small note that proves how quickly new things can become indispensable: The EOS R has a very cool cover that engages when you turn the camera off, protecting the sensor from dust when the lens is removed. So naturally, I was disappointed to find that it wasn't there on the EOS RP, even though I'd never seen the feature before on another camera.

Overall, I wasn't disappointed with the EOS RP's performance as it more or less delivered what I expected for the price. However, Canon has made some bizarre decisions here. The EOS RP packs an all-new Digic 8 processor, likely a detuned version of the one on the EOS R, but has an 26.2-megapixel that's nearly the same as the one on its 6D Mark II DSLR. You can shoot at up to 5 fps in single-shot autofocus mode, and 4 fps in continuous mode, about the same as Sony's similarly priced, albeit much older, A7 II. Suffice to say, this won't make a great sports camera.

However, it does pack Canon's excellent Dual Pixel phase-detect and contrast-detect autofocus system, which excels for most other kinds of shooting. It nailed single-shot shooting focus nearly 100 percent of the time, and in single-point continuous mode, I was rewarded with a large percentage of sharp shots. 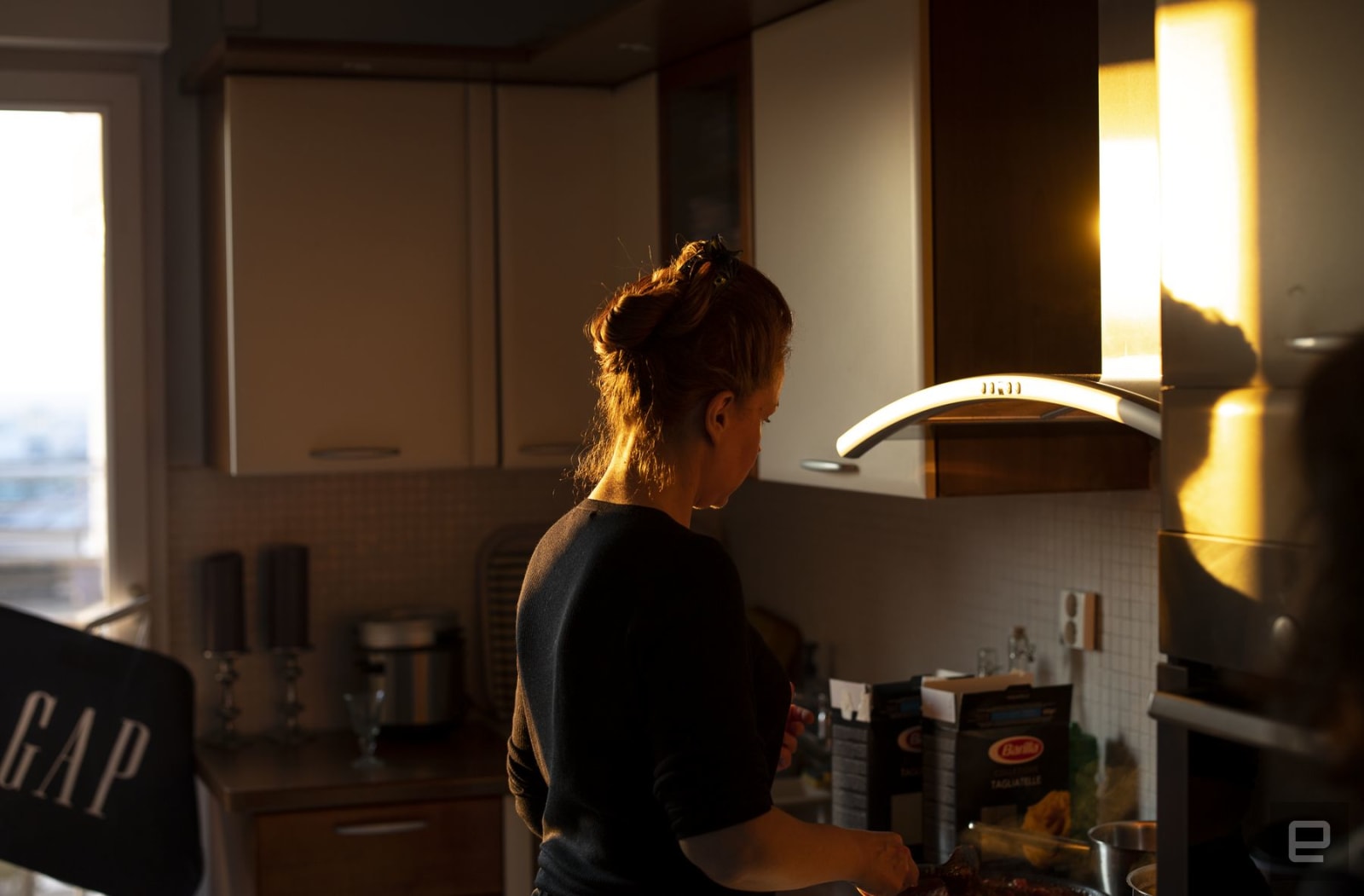 Thanks to the new processor, the EOS RP has a very decent eye- and face-tracking system (Canon calls it pupil detection) for a budget full-frame camera. It now works in continuous mode, rather than just single-point autofocus as before. Provided I stayed pretty close to my (human) subjects, I found it locked on to their eyes and face very well. And if their eyes disappeared from view, it picked right back up again when they turned around. So Canon's updated AI system looks very promising.

The only problem is that the RP slows to a lethargic 2.5 fps in pupil-detection mode, with a blackout between shots that makes it hard to follow fast-moving subjects. Still, for simple photo shoots or weddings, where the subject isn't flying around, I found it tracked them and gave me a very good hit rate of in-focus shots.

I said that the EOS RP would make a good street-photography or vacation camera because of its size, but there's a large issue with that. If you want to shoot with a silent shutter, as many street photographers do, it only works in Canon's "scene" mode. That means you have little manual control over the setting, making it essentially useless for the unusual lighting situations that happen all the time on the streets. I can't figure out for the life of me why Canon did this, and I really hope they rectify it with a firmware update.

There's a lot to dislike about video on the Canon EOS RP. Yes, it does 4K, but like the EOS R, only with a 1.7x APS-C sensor crop, which limits the low-light benefits and shallow depth of field of that big sensor. Worse still, the Dual Pixel autofocus system only works at 1080p, so you're limited to the much slower, more erratic contrast-detect system for 4K. 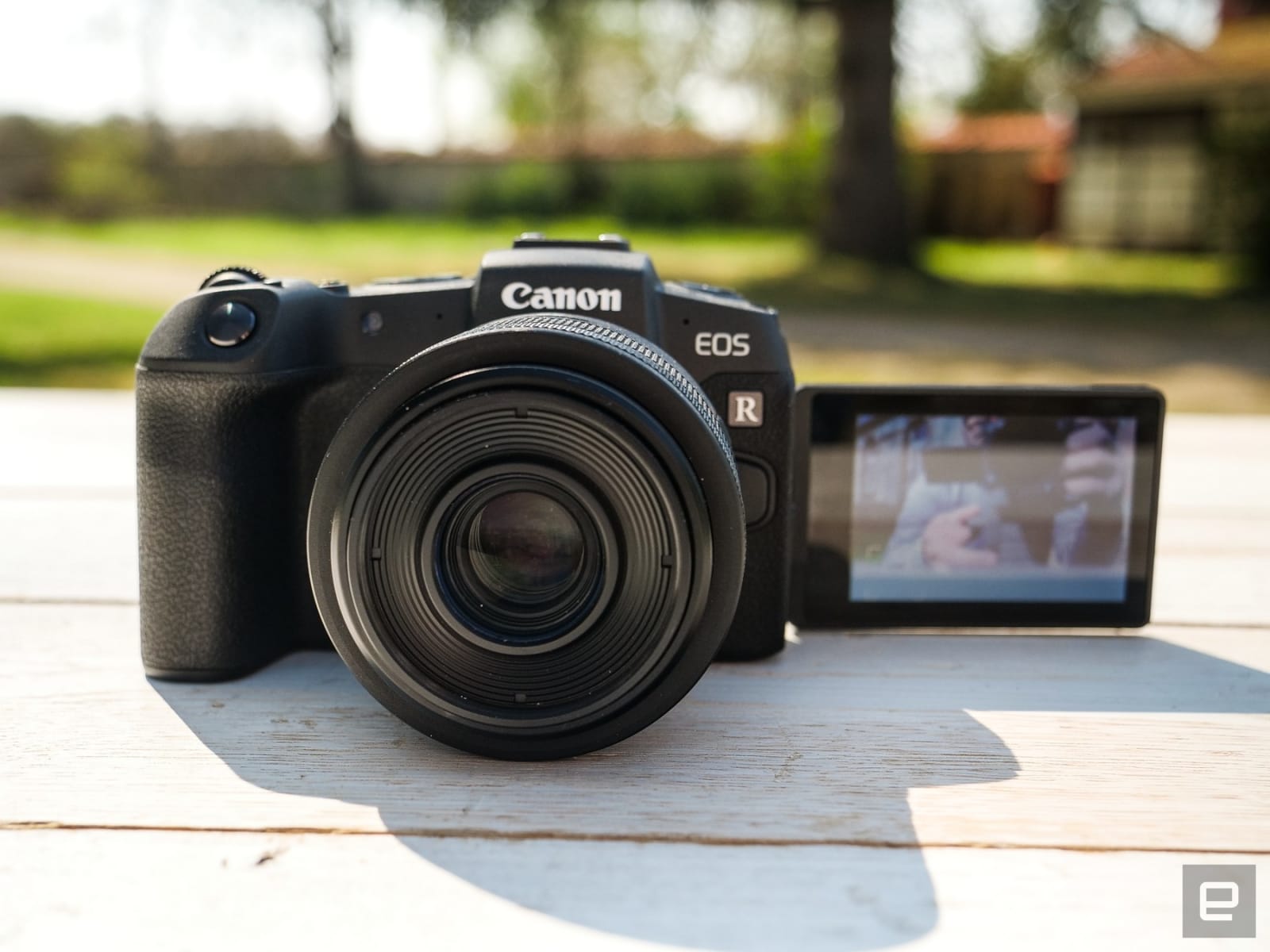 But wait, there are more (bad) things. At 1080p, I could shoot at 30 fps and up to 60 fps, but not 24 fps -- the most commonly used video speed. Meanwhile, at 4K, you can shoot at 24 fps but not 30 fps. That makes it impossible to mix and match 4K and 1080p, something that I do all the time. The problem doesn't exist in Europe's PAL land, as 25 fps is available in both 4K and 1080p, so switching the camera's frequency is a possible workaround in North America. Still, this makes absolutely no sense -- why, Canon, why?

With the flip-around articulating display, the Canon would make a good vlogging camera. However, it has terrible rolling shutter that, combined with the lack of in-body stabilization, makes handheld video too shaky. Finally, you can only shoot video internally and externally at 8-bit, not 10-bit, and the camera has a pretty poor dynamic range in the first place. That limited my color-correction options when editing later.

With all those issues, I can't recommend the EOS RP for video. Canon's EOS R is a better option, though it's not ideal either. For around the same budget, I'd recommend Fujifilm's X-T3, which offers phase-detect autofocus, 10-bit internal video and more. If you want full-frame and are willing to spend more, get Nikon's Z6.

I've always liked how Canon's cameras reproduce colors, thanks to the excellent color science. The EOS RP continued in that vein, producing pleasing skin tones and colors, especially in JPEG mode. However, the dynamic range isn't the greatest at lower ISOs, so when I shot in RAW mode and tried to push the shadows (make them brighter), I got a lot more noise than I expected.

To get around that issue, I took advantage of the camera's excellent low light, high ISO performance. You can get usable images at ISO 12,800 and even up to 25,600, letting you shoot in moonlight or candle-lit rooms. That's the benefit of a full-frame sensor, which has larger pixels that can suck up more light. It's too bad that those benefits don't extend to 4K video, too.

The great high ISO capability is also offset a bit by the lack of in-body stabilization. When you shoot at slow shutter speeds, you're more likely to get a blurry shot unless you have very steady hands or a lens with built-in stabilization.

Even though it's relatively cheap at $1,299, I don't think the EOS RP is a great value. What I like most about the RF mount is the excellent new lenses, but it costs $2,199 with a native RF 24-105mm lens. You can go cheaper with an adapter and EF lens, but that's a waste of the system. If you're aware of its limitations, however, it could be a good first full-frame camera that consistently delivers sharp photos.

If I was shopping for a camera in that budget range, I'd be seriously tempted by Fujifilm's $1,499 X-T3, even though it's an APS-C and not a full-frame mirrorless model. It has a better feature set across the board, with faster shooting speeds and much better video functions. And with a kit lens, it would actually cost less than the EOS RP with a native RF lens, at $1,899 compared to $2,199.

If you'd rather spend even less, the X-T30 can match or beat the EOS RP feature-for-feature, and costs just $899 or the same $1,299 with a 35mm f/2 lens. Another good option is Sony's A7 II, which lacks 4K video but has 5-axis in-body stabilization and more native lens options.

Meanwhile, I'm still waiting for Canon to really show what it can really do with the RF system. Hopefully, the next model will have in-body stabilization, dual card slots and real 4K to go along with that stellar Dual Pixel autofocus system.