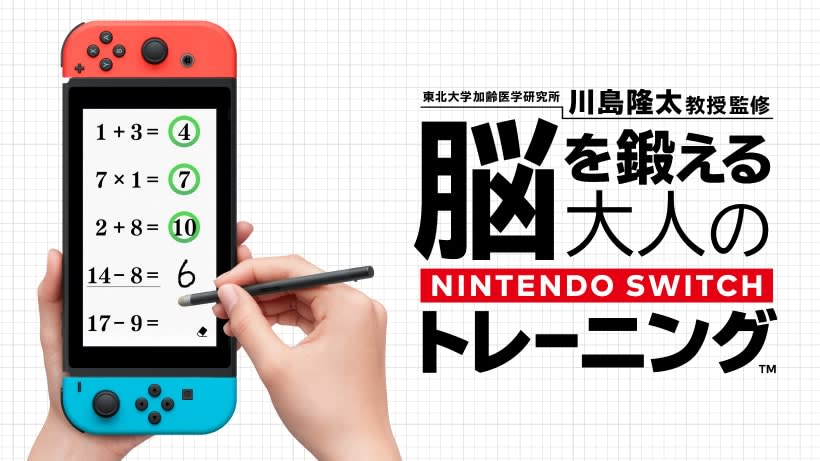 Warm up your gray matter and get ready to flex your neurons, because Nintendo's beloved Brain Age (or Brain Training depending on where you live) series is coming to the Switch. The company has announced a new version of the game to be released in Japan at the end of the year.

The full title of the game translates to "Nintendo Switch Training for Adults with Brain Training Supervised by Prof. Ryuta Kawashima, Research Institute for Aging Medicine, Tohoku University" and it will have features like support for two players and battle modes. The challenges look to be similar to the original game, with mathematics puzzles, memory tests and pattern recognition tasks for you to work through.

The game will use the Switch's Joy-Cons for input, using their infrared cameras to record hand and finger movements so players can use their fingers to indicate the answer to a calculation problem, for example.

There's another throwback input device supported as well: a capacitive stylus for writing answers to puzzles on the Switch's screen. This retro approach harks back to the original franchise, and the stylus will be released alongside the game for ¥864 ($8).

The original Brain Age games were recommended by some Japanese doctors to stimulate the brains of seniors and to slow memory loss, however, scientific studies found that mental exercises like those found in the game were not actually effective at lessening mental decline. In either case, the game was certainly fun and was hugely popular with kids and adults as well as older people.

In this article: brain training, gaming, nintendo, nintendo switch, personal computing, personalcomputing, stylus
All products recommended by Engadget are selected by our editorial team, independent of our parent company. Some of our stories include affiliate links. If you buy something through one of these links, we may earn an affiliate commission.