More than double the battery life and noise cancellation for the same price.
B. Steele|10.17.19

Master & Dynamic has a stellar reputation for great-sounding headphones, and its set of first true wireless earbuds, the MW07, was no exception. Despite that audio quality and several more handy features, the MW07 suffered from a couple key issues. First, they only lasted 3.5 hours on a charge. Even a year ago, that figure was quite low. Second, the Bluetooth range was noticeably worse than much of the competition. For 2019, M&D went back to the drawing board and developed two new models, but the MW07 Plus ($299) is the direct successor to the MW07. And most importantly, it fixed both of those issues that plagued the first version.

In terms of battery life, the MW07 Plus now offers 10 hours of listening time on a charge. The included aluminum charging case packs three full charges, so you can expect up to 40 hours of use before you'll need to reach for a USB-C cord, according to the company. Thanks to a quick-charge feature, the earbuds can charge to 50 percent in 15 minutes and a full charge takes 40 minutes. That's for both the earbuds in the case and the entire set plugged in -- those times apply to either method. M&D upgraded to Bluetooth 5.0 with support for aptX and SBC and says it increased the range to 100 feet (30 meters). I had some issues with wireless range on the original MW07, so I'm looking forward to putting that figure to the test during a full review.

The company also added active noise cancellation (ANC) on the MW07 Plus. Via the on-board volume controls, you can activate ANC and an ambient sound mode -- or turn them both off entirely -- with a long press. Between the battery upgrade and the addition of noise cancellation, what M&D is offering here is pretty impressive considering it managed to do so without increasing the price. 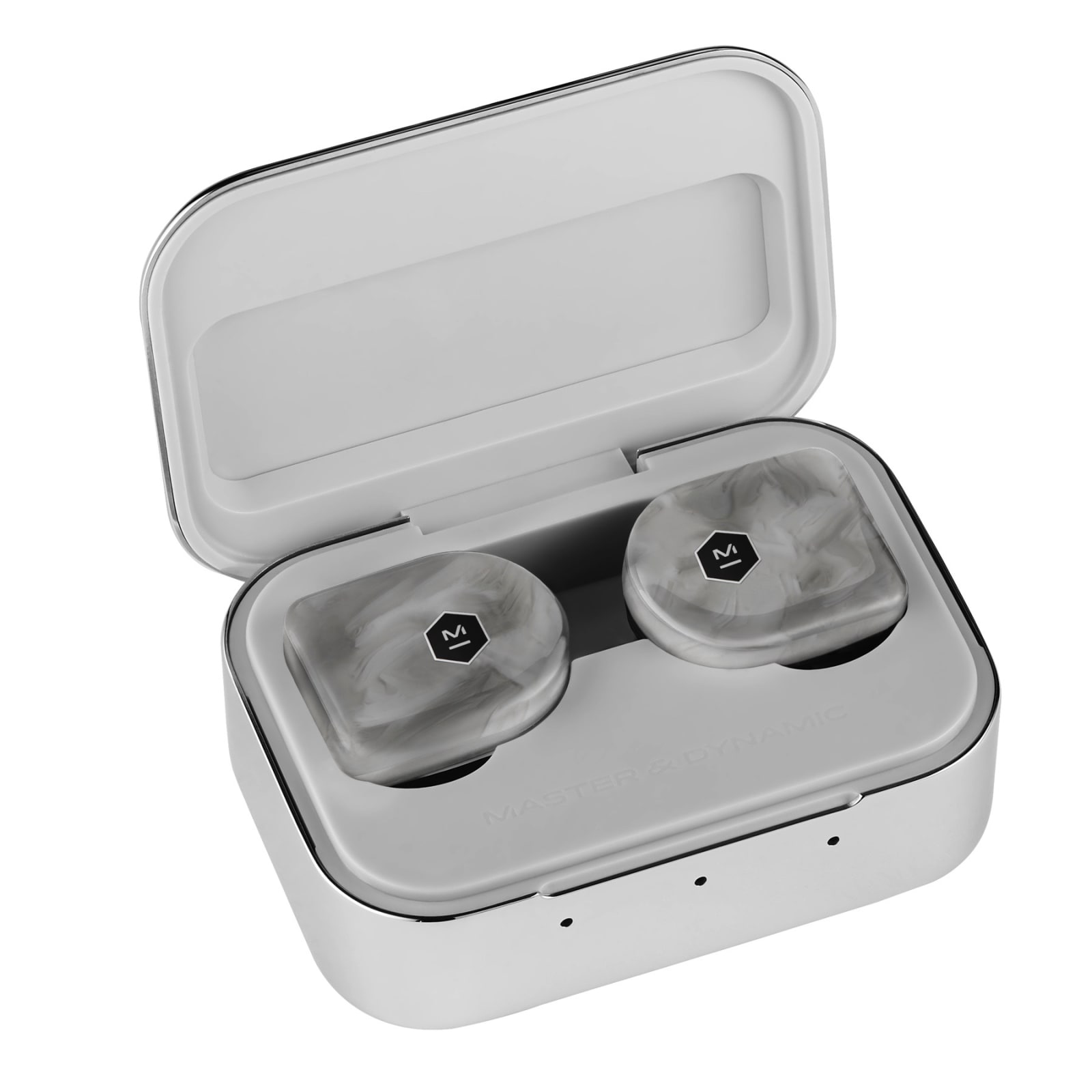 Master & Dynamic also increased the ingress protection on the MW07 Plus to IPX5 water resistance. While the new MW07 Go might be a better option for the gym, the MW07 Plus should hold up just fine during your sweat sessions. There are also four beamforming microphones (two on each side) that the company says will filter out ambient noise to focus on your voice. Physical controls are here as well, giving you the ability to adjust volume, play/pause, skip tracks and activate a voice assistant without having to pick up your phone.

Like the MW07, the MW07 Plus has acetate enclosures. Master & Dynamic opted for the material that's typically used in sunglasses and eyeglass frames to bring a punch of color to its earbuds. The company uses a lot of metal and leather in its products, but since you can't really employ those on true wireless accessories (besides the case), it chose acetate as the "premium" material. The MW07 Plus will come in four colors: Tortoiseshell, White Marble, Steel Blue and Black Quartz. That last colorway is a Kevin Durant/Studio 35 special edition. Durant and his Thirty Five Ventures invested in M&D earlier this year. The MW07 Plus also comes with three sizes of the company's Fit Wings and five different eartip options.

The MW07 Plus is available from Master & Dynamic today for $299, and will go on sale at Best Buy October 20th.