When I think about how many milligrams of cannabis I've consumed on my quest for a good-tasting edible, I imagine their little strings of THC DNA orbiting Earth at least two or three times, flipping me the finger as they whiz by.

I didn't realize this would be such a massive endeavor a few years ago when, as a food writer focused on craft chocolate, I wondered if anyone was combining quality cocoa beans with marijuana. Since then, I've sampled dozens upon dozens of products, each figuratively dashing my taste buds' hopes against a rock -- along with my few remaining brain cells.

Because the truth is weed tastes bad. My Aunt Vickie enjoys the flavor because it reminds her of the wild '70s. I think of it as a startled skunk who has projected his dank oil through a screen of rotting greenery straight into your mouth.

In fact, as marijuana has been legalized in almost a dozen states, an entire industry -- projected to be worth $4.1 billion by 2020 -- has popped up around edibles, with ridding them of those pungent seasonings a high priority. "One hundred percent of the edibles market is focused on removing that recognizable scent and flavor of the cannabis plant and replacing it with something that's more aesthetically familiar," said Ricardo Baca, former editor in chief of The Cannabist and CEO of media agency Grasslands.

In the past few years, I have tried gummies, lollipops, chocolate bars, truffles, sodas, bubbly waters, mints, cookies, brownies and more. Some were better than others, but I'd call almost all of them crap. That's not necessarily because of the quality of the marijuana so much as the other ingredients.

I believe that if a company says it's selling a high-quality product, it should do more than get you high. It should taste high quality, too.

Over and over again, when I've relayed my quest to industry folks, the phrases that come out of their mouths are "clear distillate" and "isolate." Distillate refers to cannabis that has been put through a distillation process to remove most of the bad-tasting terpenes and other elements whereas isolate retains only the pure THC or CBD molecules. (THC is the psychoactive component of cannabis whereas CBD is known for its therapeutic properties.) Apparently I'd find my holy grail if I followed this path.

The truth is weed tastes bad.

What I've discovered, though, is that not all distillates -- or even isolates -- are created equal. Some edibles made with the stuff taste far less dank than others. Despite all the regulations around marijuana right now, there aren't any that measure taste or purity in edibles. The state regulators are only concerned with the extraction method the company uses (which varies by state law) and the amount of THC or CBD in each edible. How well the company strips away the other flavors is up to it.

"It's brand by brand right now," explained Nichole Graf, the author of Grow Your Own: Understanding, Cultivating, and Enjoying Marijuana and the owner of Raven, which sells cannabis flower and concentrate. "State by state you have entire markets that are not communicating with one another and that are setting their own definitions that have no legality behind them. These markets have no industry groups that are cementing terms that consumers can rely on."

Of course, there are several reasons not to use these types of extracts. They cost thousands of dollars per kilogram. And if you're after marijuana's medicinal properties, "You want your edibles to taste like weed," said Graf, adding that the flavors indicate the presence of more "bioavailable chemical constituents."

A cheat sheet for marijuana-speak: What do these terms mean? 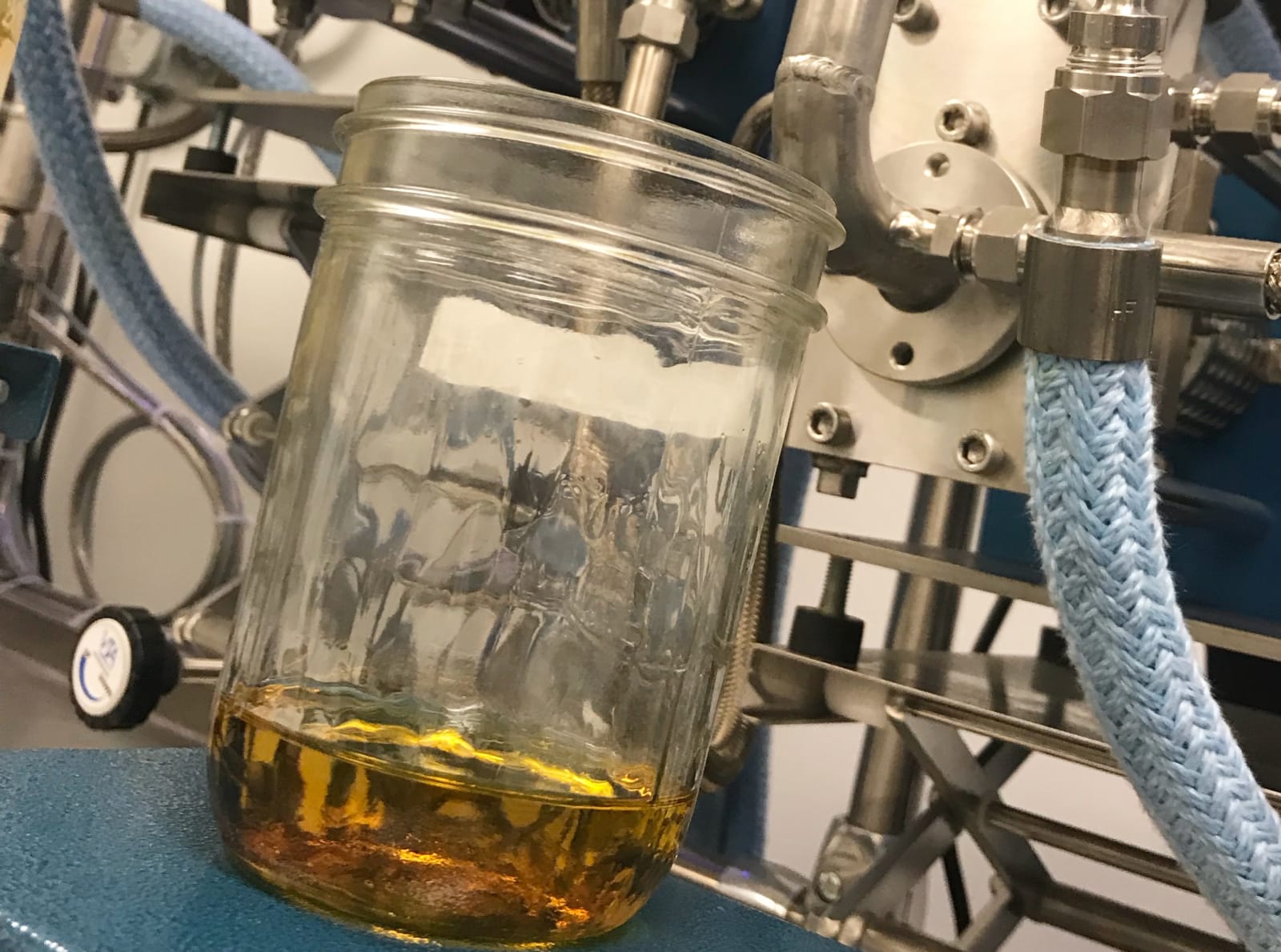 The result of the distillation process.

Broad spectrum refers to a type of cannabis product and is kind of the bottom of the barrel. It contains those smelly terpenes, chlorophylls, waxes and other parts of the plant. This term is often used interchangeably -- and confusingly -- with "full spectrum." These products look something like dark honey if you stuck it in the freezer for 15 minutes.

Distillate, meanwhile, refers to a type of extract created through a distillation process, boiling a liquid until its components vaporize at different temperatures, then condensing them back into separate liquids.

Mike Schmitt, a technical project manager at weed tech company Sorse, said one would essentially chop up the cannabis plant and create a sort of "cannabis smoothie," then treat it with a solvent like hydrocarbon, carbon dioxide or ethanol. This process removes many of the flavanols and other grassy-tasting chemical compounds.

When finished, you're left with a runny liquid that looks kind of like amber maple syrup. Nature's Lab Extractions owner Marcus Moates estimated that the distillation process removes 85 to 95 percent of the original plant material, leaving you with just a few grams of distillate.

Isolate refers to a type of extract that consists solely of pure molecules like THC or CBD. It usually comes in powdered form and has no flavor whatsoever.

Because there's no legal definition, some companies' products still contain other molecules from plant matter besides THC or CBD, whereas others will truly be isolate. Unfortunately, the industry has not standardized these terms, so everyone uses them differently, and it's hard to be sure what you're getting.

I tried to keep all of this in mind as I sauntered into Herban Legends near Pike's Place on a recent trip to Seattle. Most of the edibles I bought reeked of weed and some of cheap vanillin (the artificial stuff companies use in sweets when they won't pony up for the real stuff). I'll never forget the round, primary-colored gummies packaged individually in clear cellophane, connected in the kind of long strand that called to mind a giant strip of condoms.

My budtender recommended something called Utopia sparkling water (in tangerine flavor!), which employs the motto "zero calories + zero sugar + zero cannabis taste." It tasted like an excellent La Croix, with bursts of citrus and big bubbles -- a welcome respite from the usual sugar-laden cookies, truffles and candy.

"Who made this manna?" I asked myself, taking another swig. 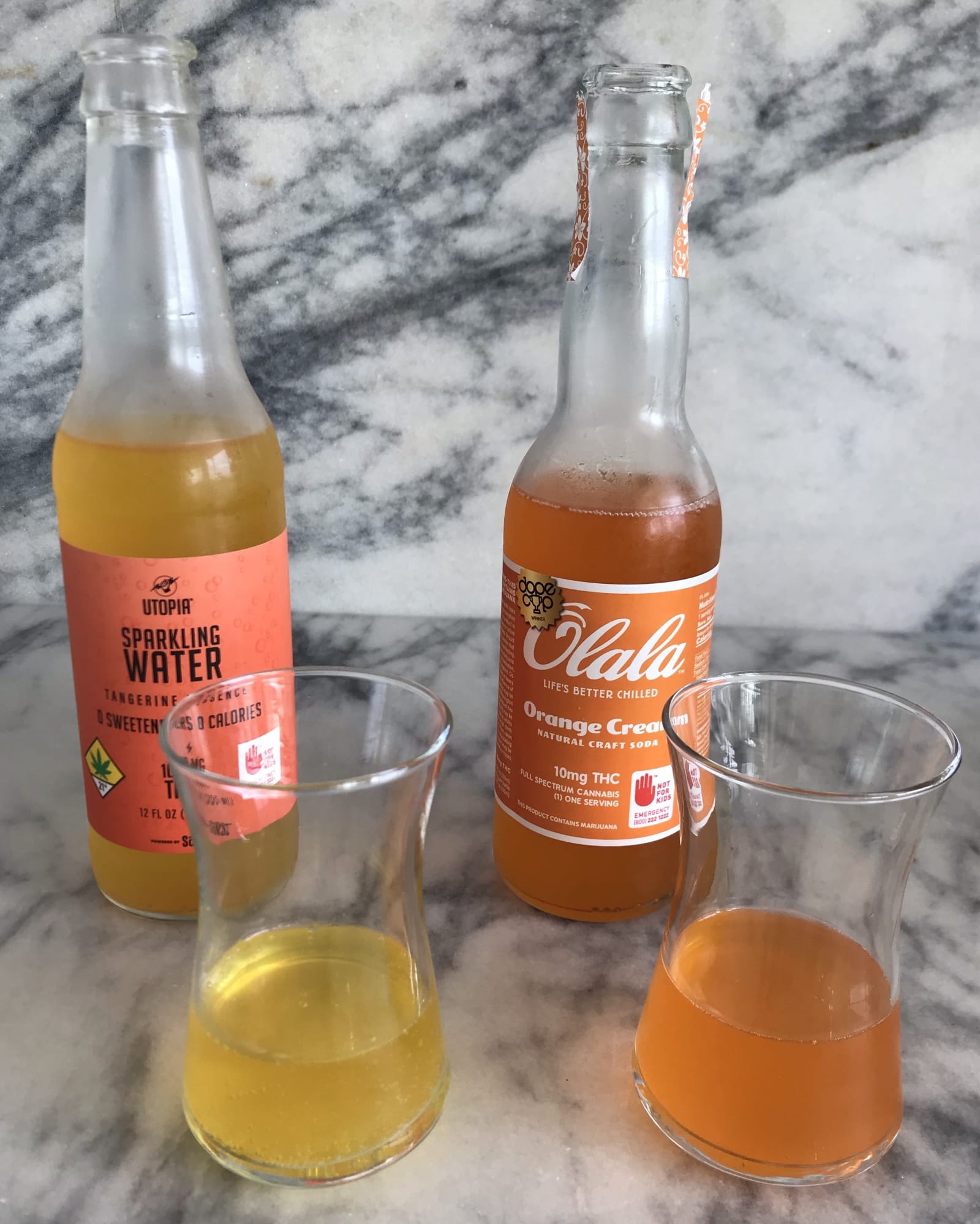 It turns out that, like the difficulty of determining extraction processes, it's also somewhat convoluted to figure out who made which edible. Utopia is made by Green Med Labs, which is the licensed THC partner in Washington State of a company called Sorse. You'd only know this if you were scouring the label instead of enjoying your drink.

Unlike other cannabis companies that own farms and dispensaries and all that jazz, Sorse is a technology company focused on cannabinoid emulsion. Translation: Its product is intellectual property -- essentially, how to make good edibles -- and it sources materials as well as consults with brands across the US and Canada. It specializes in making water-soluble cannabis extractions, which appear in products like the tangerine water I tried and which some consider to be the future of edibles.

"We are selling a technology, not THC," said Mike Schmitt of Sorse, who is also one of half a dozen food scientists on staff. "Should something happen to THC legislation or CBD legislation [in a particular state], we can immediately pivot and move forward, because we are a startup and need to be able to be as nimble as possible in an environment that is still quite gray."

Sorse currently works with more than 20 brands, each of which says it's "powered by Sorse." This structure allows the company to work around state lines. Luckily for me that translates to edibles without a hint of herb.

"We are selling a technology, not THC."

Another company, called Binske, is also putting taste front and center. Priding itself on its farm-to-table approach to edibles, the company based in Denver, Colorado, works with artisans to source the best ingredients of all sorts, not just marijuana. For example, Binske uses single-origin chocolate from the Marañón Valley in Peru, made by Marañón Chocolate. This might be scribble scrabble to you, but it's music to a chocolate freak like me. You see, I've known Marañón owner Dan Pearson for years (he looks somewhat like Breaking Bad's Walter White); the cocoa beans he sources and the chocolate he makes are coveted across the world.

I tried Binske's 68 percent dark chocolate called Pure Fortunato (Don Fortunato is the farmer's name) and was surprised by its richness and great melt. There is, as we say in the industry, an off-taste of something grassy or bitter on the backend due to the, um, grass. But Binske's bar is a cut above anything else I've tasted after years of research.

The company also produces honey, pâte de fruit, olive oil, fruit leather and granola. In July 2019, it started partnering with MariMed to be the most distributed cannabis brand in the US; it's currently available in 11 states and Canada. Like Sorse, much of its business model has to do with IP. Companies can license its entire process as well as receive help with quality control, plus use the Binske name for brand recognition.

Binske credits chief product officer Nick Nolan with ensuring that its foods are consistent across state lines. Unlike many in the industry, Nolan is self-taught. He said as an undergrad he "was only a few classes away from a degree" in chemistry and that he used to "make hash on a small scale as a consumer and then [gained] an opportunity once cannabis was legalized to actually create a career out of it." Now he spends much of his time on the road, training partners on the company's operating procedures. 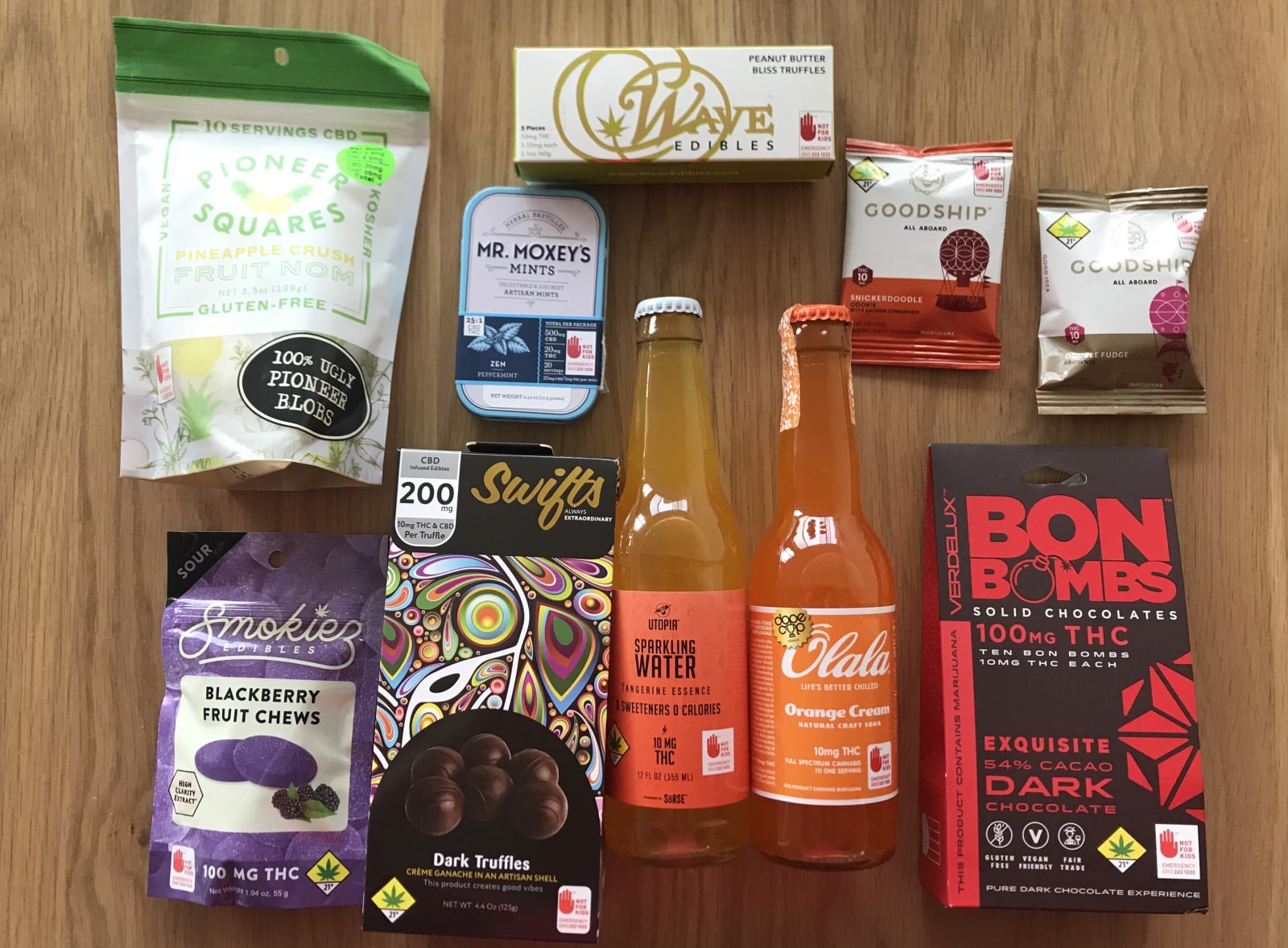 Just some of the edibles I've sampled over the years.

I wish Nolan or Schmitt had been available back in college to train me on making pot brownies in a dorm room, but alas, the market has advanced light years since then. However, there are still a few black holes to conquer before good-tasting edibles are the norm.

For starters, there are the ethics behind a truly flavorless edible. Most cannabis products have childproof locks (which yours truly has a hard time opening despite my advanced age), but not much can come between a kid and their candy. Should something medicated truly taste like regular food? What's happening in the vape industry -- where flavored e-cigarettes are illegal in several states and may soon be across the country -- could be a cautionary tale for flavorless edibles.

Another big issue? The industry desperately needs to agree on terminology so that consumers know what quality of marijuana they're getting. The related issue is that companies need to be willing to invest not only in high-end cannabis but also other high-end ingredients.

From where I sit, consumers are vastly more educated than they used to be about specialty foods like coffee, beer, cheese and chocolate. They can also discuss at length their preferences for indica or sativa, THC or CBD, distillate or full spectrum cannabis. But for some reason, they're still willing to eat gummies made with high-fructose corn syrup and red dye that occasionally taste like rotten broccoli on the way down. There's more to an edible than the high, man.