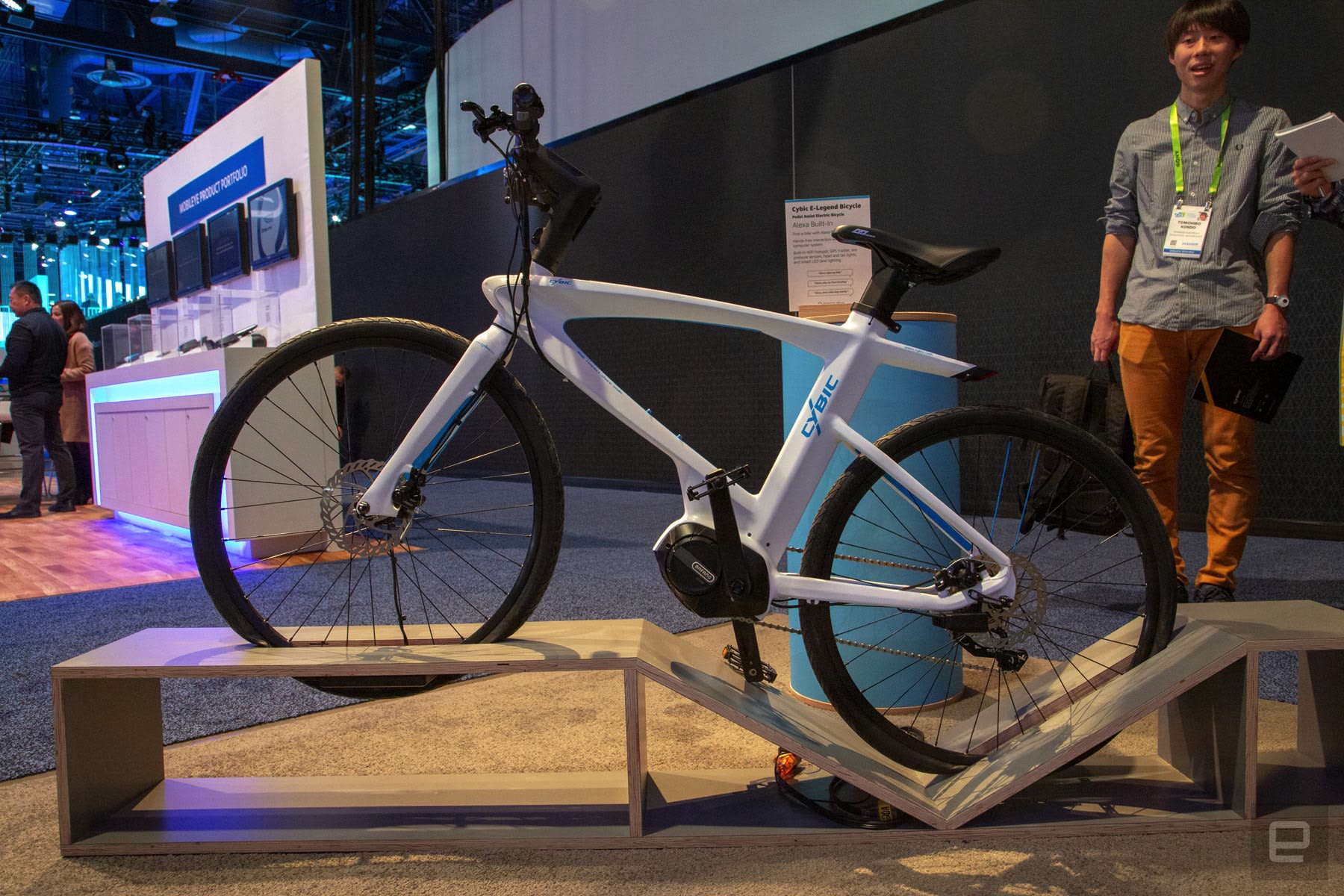 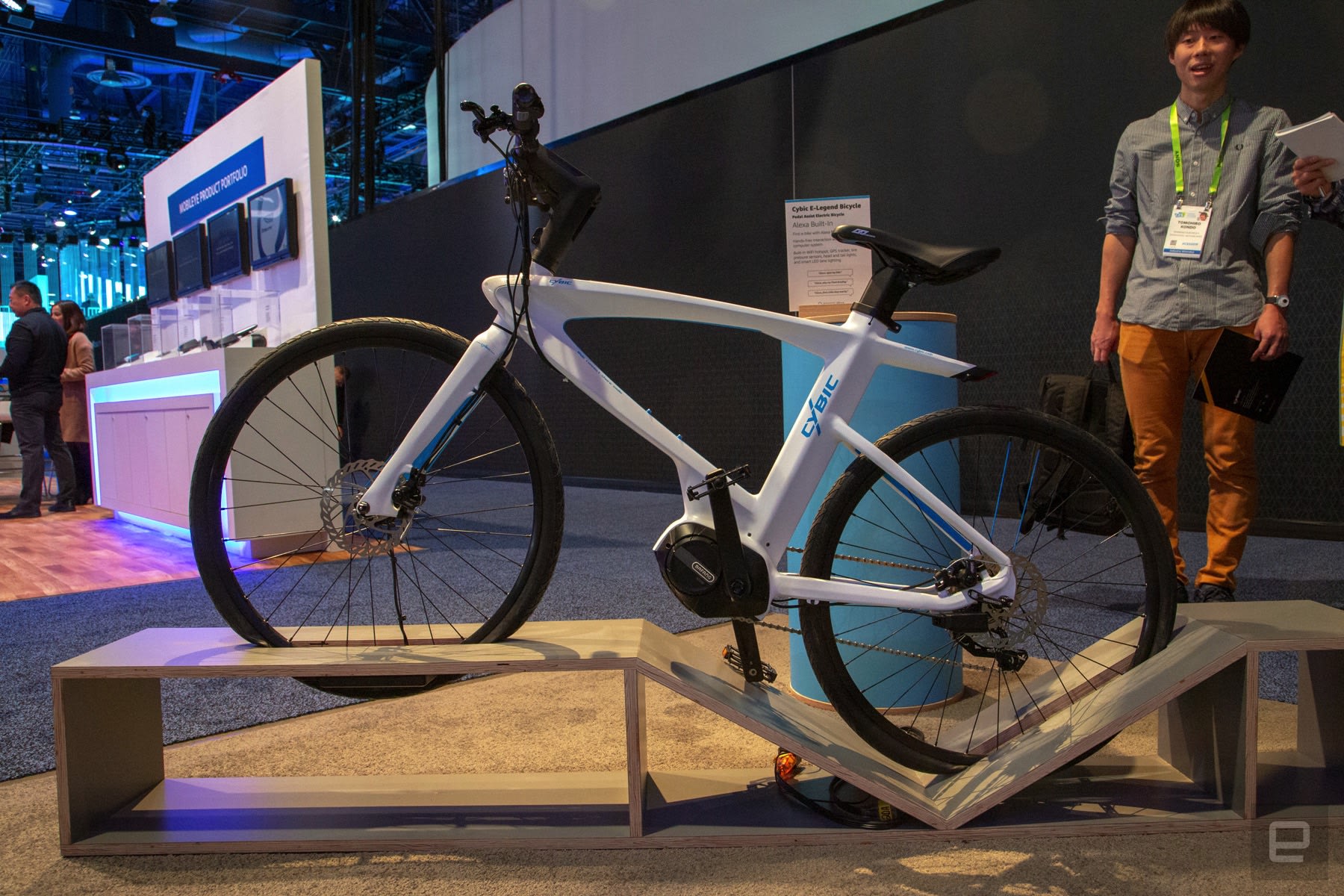 When I first clapped eyes on the Cybic E-Legend, I thought: "A bicycle with Alexa? What's the point?" It felt like an utterly pointless addition to a pedal-powered two-wheeler, electric or otherwise. But as I waddled around the bike at CES, I started to appreciate the concept. It can offer directions in a pinch, turn the heating on before you get home, or send a message to your family when you get stuck in traffic. Heck, you could even use it to order UberEats while you're wrapping up a weekend ride.

According to Amazon, Cybic is the first company to offer an Alexa-enabled bike. The complete range, which includes a hybrid and non-electric Legend, will be sold in the UK through Halfords this summer. A Cybic spokesperson hinted that the bicycles will come to other markets later. 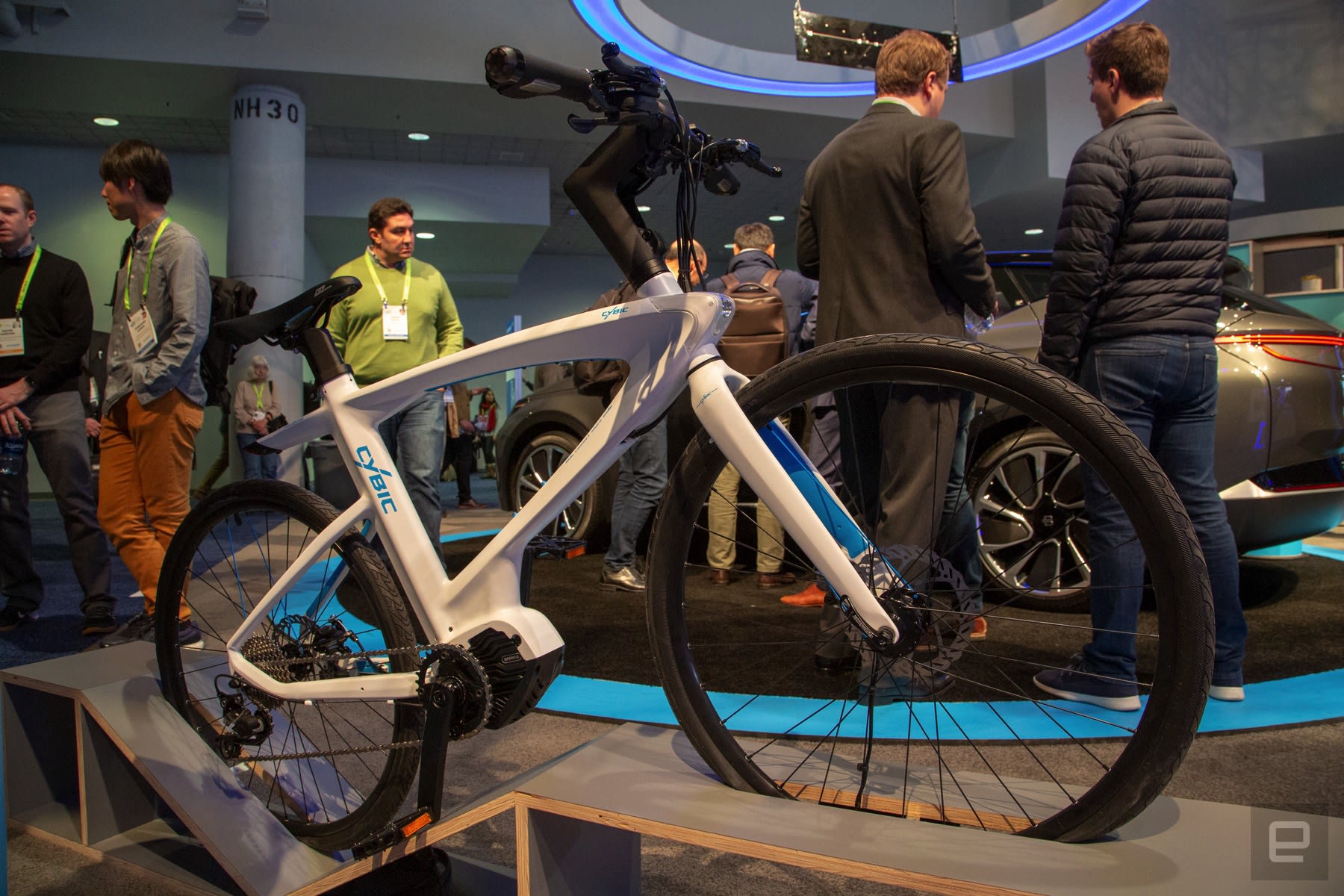 The Cybic E-Legend has a small color-display computer, nestled in the middle of the handlebars, that houses a small speaker and far-field microphone array. The latter was surprisingly sensitive -- on the show floor, packed with loud attendees, it picked up my "Alexa" requests just fine. Of course, a convention booth is quite different to real-life riding conditions. I'll be interested to see how the microphones hold up while I'm riding at high speed, with plenty of wind and noisy cars around me.

Actually listening to Alexa proved tricky. For one, the speaker in the bike was too quiet, tinny and crackly. It should be possible, however, to connect some Bluetooth headphones and listen to Alexa that way. The second problem was connectivity. Cybic's bikes can access the internet through a tethered phone or bundled Vodafone SIM card (each bike will come with a three-year data plan). On the show floor, where connectivity of any kind is impossible, the bike struggled to deliver timely responses. I asked for a flash briefing, for instance, and heard the first headline minutes later.

For now, I'll reserve judgment. It does highlight the importance of response times, however -- if you're waiting more than two minutes for an answer, you might as well stop pedaling and find the information on your phone. 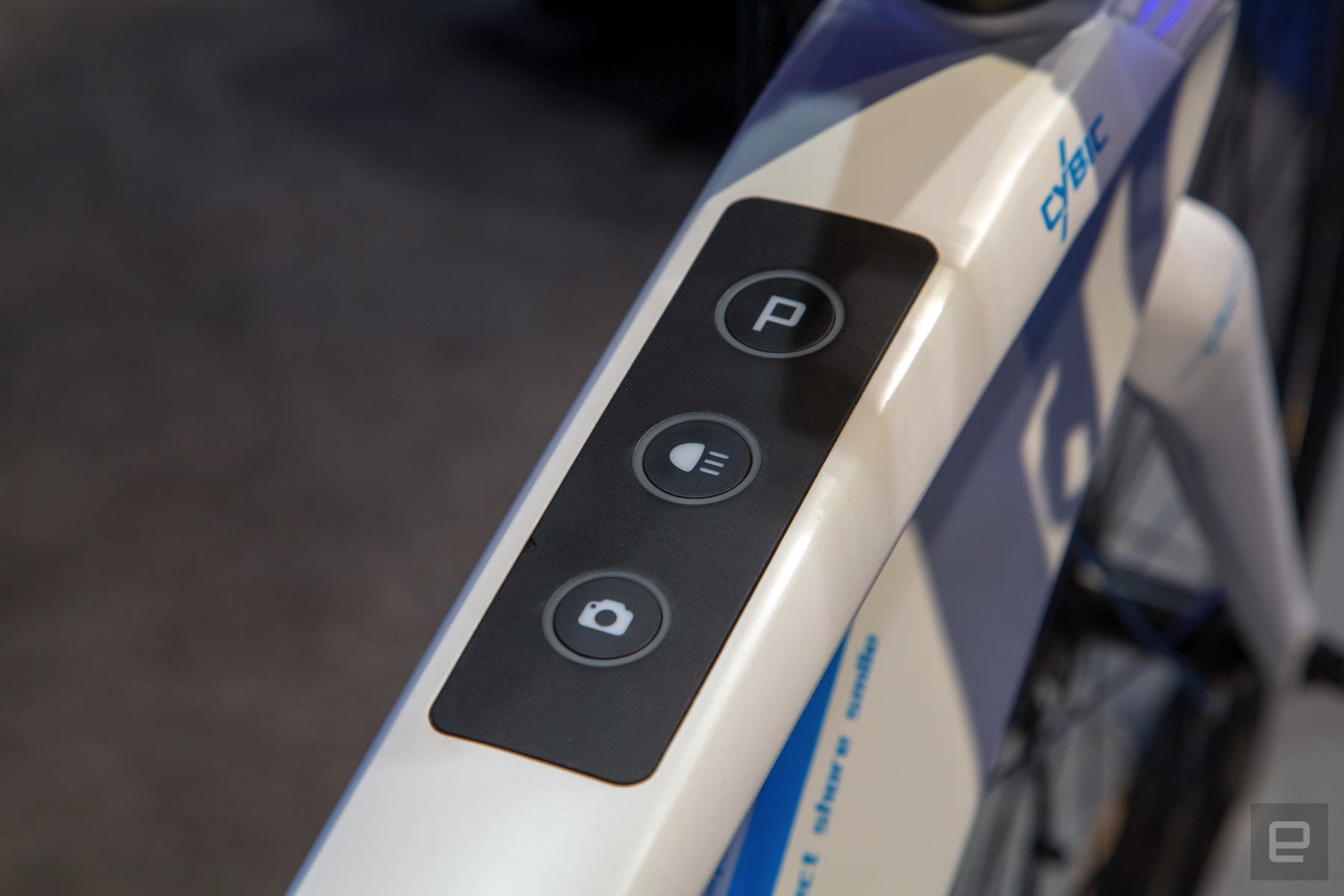 At the top of a frame, near the stem, is a plastic panel with three physical buttons. These "park" the bike using a smartly integrated rear-hub lock, turn on the frame's front and rear lights, and snap a picture with any Bluetooth or WiFi-connected camera. Like VanMoof, a smart bike startup based in Amsterdam, the Cybic has integrated GPS to combat any potential thieves. It's not clear, however, if the company is developing any kind of premium retrieval service that doesn't put your own life in danger.

The electric version of the Cybic comes with a currently unconfirmed battery and motor system to aid your flesh-and-bone legs. "Bafang M500" is written on the pedals, though, which points to a respectable 250W motor and 450Wh battery. Unfortunately, the bike was locked to the show floor, so I wasn't able to ride around and test its assistive powers. For now, I'll just have to imagine what it's like to pedal around Camden barking for Deliveroo, traffic updates, and the next track in my "get hyped" playlist.

Oh, and there's no word on pricing. Most electric bikes, however, cost at least a few thousand dollars. I would expect something similar for the E-Legend, and be very surprised if it retails for under £1,000 in the UK. Source: Halfords (Cybic)
In this article: Alexa, amazon, bicycle, bike, ces2019, cycling, ebike, electricvehicle, gear, transportation, voicecontrol
All products recommended by Engadget are selected by our editorial team, independent of our parent company. Some of our stories include affiliate links. If you buy something through one of these links, we may earn an affiliate commission.