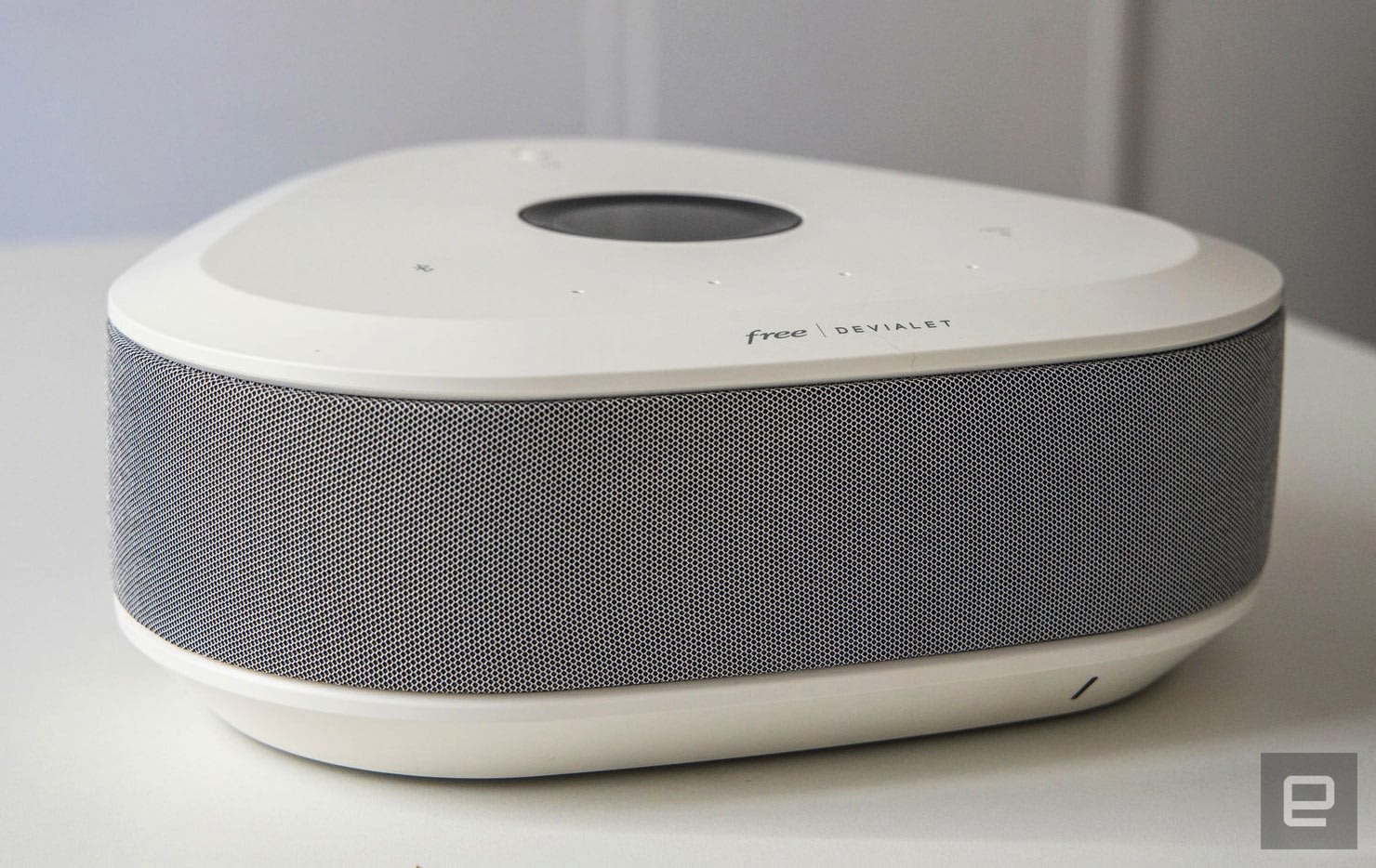 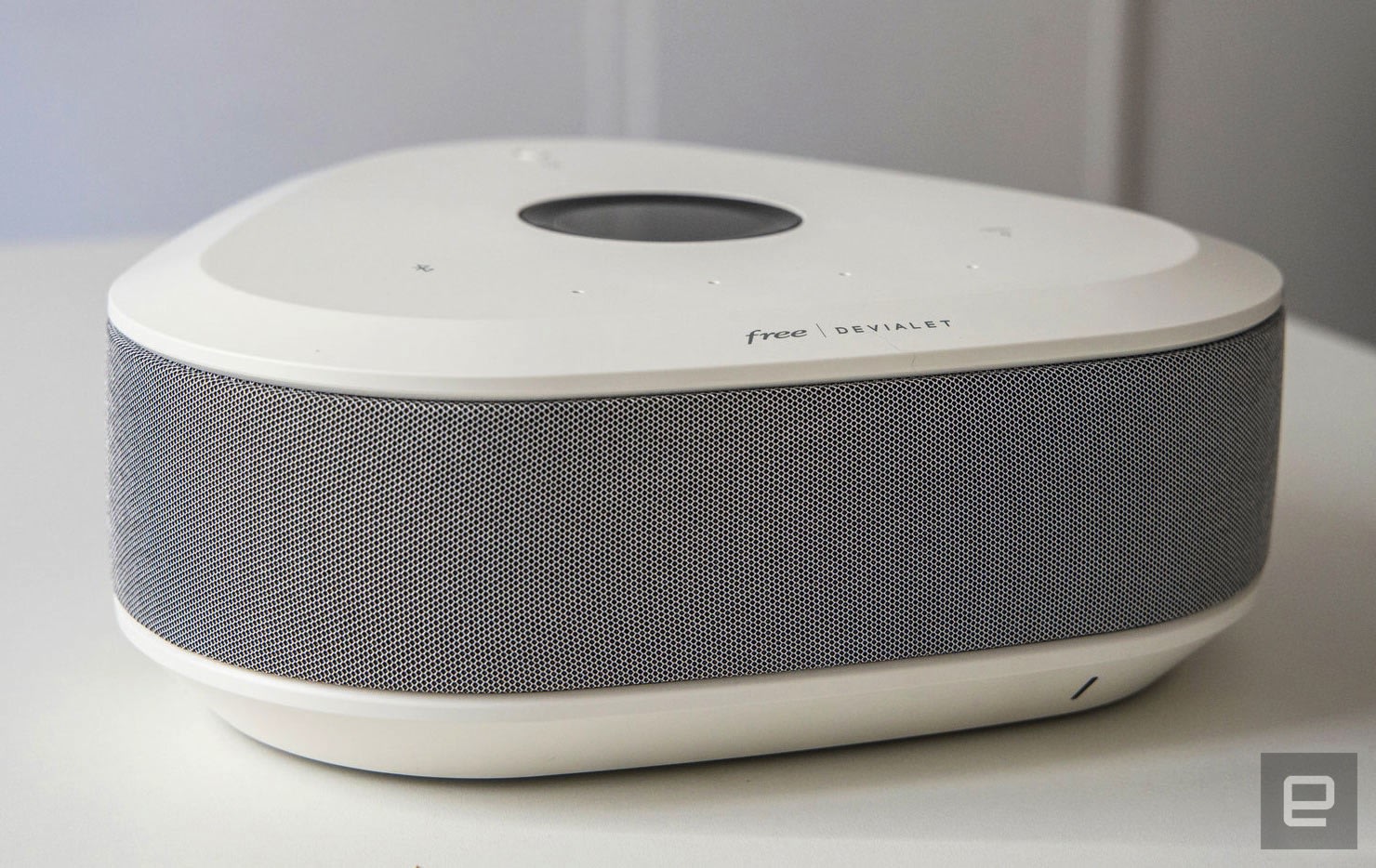 It might seem strange to do a deep-dive of an internet and TV set-top box, let alone one that you can't have in the United States. But the Freebox Delta from French carrier Free, equipped with Devialet speakers, is so strange, stylish and interesting that it merits a much closer look. And it's always good to see if the grass is greener on the other side of the Atlantic, non?

It's one of the first set-top/fiber boxes to deliver high-speed internet, media-player capability, high-end sound and 4K HDR video. It has Alexa, streaming services and even a free Netflix subscription, so it can handle most AV chores with no extra devices needed. On top of that, it's chic and, like many things French, a touch political. But the biggest question is, what can it do? Let's take a look.

The Freebox Delta is two devices, both of which are, well, delta-shaped with three rounded corners. The internet box is an unremarkable fiber modem and router that provides internet speeds up to 8Gbps down and 400 Mbps up, though that depends largely on where you are in France.

The more interesting component is the Devialet set-top box. Created by English designer Jasper Morrison, who has worked with Canon, Sony and others, it doesn't look anything like Devialet's alien egg speakers, which you might have seen before. Rather, the box has its own aesthetic vibe. It has speaker grills along all three sides, including three custom-designed bass speakers for extra bottom-end oomph. The plastic top has the lighting and controls, while the bottom plastic panel is removable and lets you install your own hard drives. The 11-pound weight reminds you it's a fairly serious device. You might ask why a French phone carrier would team up with a luxury brand like Devialet -- one that sells speakers starting at $1,000. It might be partly because the owner of Free, Xavier Niels, is also an investor in the company, but Devialet is also interested in cracking new markets. "This is a very important agreement and an absolute break with what exists on the market," said Devialet CEO Frank Lebouchard.

There are lights on top to indicate power/status/volume levels, along with indicators for Bluetooth and WiFi. And a button up there lets you disable or enable Amazon's Alexa and the Freebox voice assistant -- more on that shortly. Other inputs include HDMI 2.1 (the very latest flavor), ethernet output, USB Type-C and a connection for an antenna because many folks still use those in France. It's connected to and powered by a USB Type-C cable that runs to the router, so there's no ugly power cable or brick required.

Users can control things with two remotes. There's one that's touch-enabled with an integrated OLED screen, which you can recharge via wireless Qi just by setting it on specially-placed magnets on the box. (You can also use it to charge any Qi-compatible smartphone.) If that's too complicated, Free also offers a regular, far-less modern-looking push-button remote. Or you can use the companion smartphone app or voice commands.

An alarm system was also included in my package, and it seemed perfect for my tiny Parisian studio. It comes with a motion sensor, door-open detector, camera and remote. As with the rest of the package, everything looks modern and sleek. 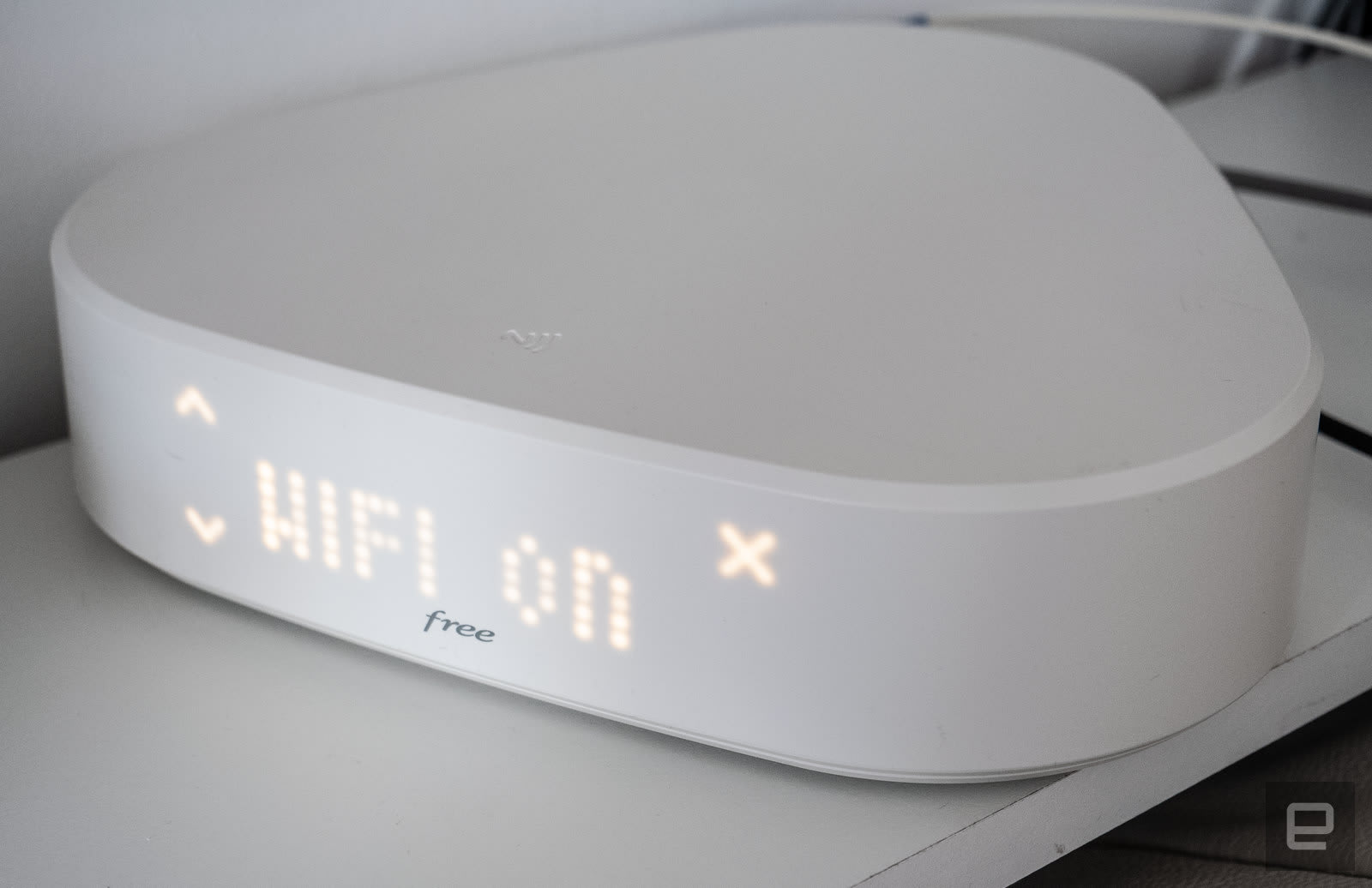 As an internet device, the Freebox Delta is impressive. My speeds were a "mere" 700 Mbps, which is still well above average in France. Via the extremely state-of-the-art AC4400 Tri-Band MU-MIMO tech, I got the same 700 Mbps speeds over WiFi.

It's not that simple to benefit from the maximum 8Gbps speeds, however. The modem box has a special port that uses a technology called "10 gigabit SFP+." The regular ethernet ports and WiFi will only deliver up to 1Gbps, so the only way to benefit is by using special cables and adapters. The required infrastructure, called 10G-EPON, is only available in select regions of France, as well. That might change, but many subscribers aren't pleased that Free didn't make all this more clear.

The Devialet set-top box can handle 4K HDR, which works perfectly with my 4K HDR projector. Unlike my last box from operator Orange -- which didn't like long cables -- the Freebox let me send a 4K HDR signal about 20 feet over HDMI. It's worth mentioning again how incredible it is that an internet box has HDMI 2.1 and Tri-Band MU-MIMO WiFi, technology that's still brand new in the marketplace.

Free offers a decent assortment of cable and streaming channels with its subscription. That includes free Netflix for an unlimited time, though it's only the standard plan with low-definition video rather than 4K HDR. However, I was able to upgrade to the premium plan for six euros, so it more than halved the price of my existing 4K Netflix subscription.

The TV interface is fluid, modern and pleasant, and you can control it using the remotes or by yelling "OK Freebox." I can change channels, reduce the volume and do other chores by voice command. That's particularly handy if you're cooking or multitasking, but your partner would probably kill if you constantly spoke to flip through channels or adjust the volume. It also worked pretty well despite my strong anglophone accent.

The Freebox Delta has Alexa on board to give you music and information. It worked just like any Echo device, playing music from Amazon, Spotify and other services. As with all things Alexa in France, it's impossible to change the voice language for now, though. 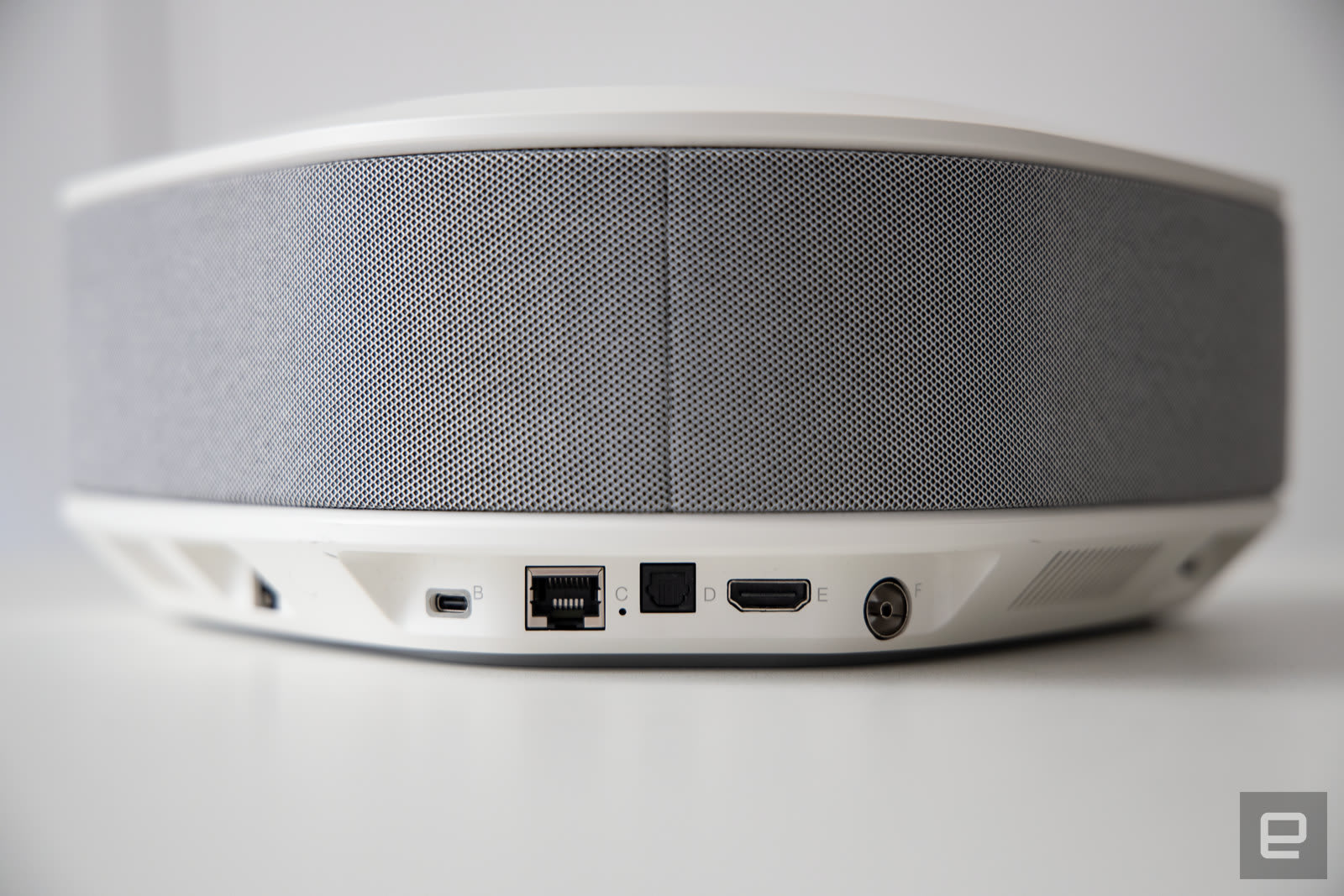 The speakers pumped out enough volume to deafen us in our small studio, with bass and sound quality that matches similarly-priced Sonos or Bose devices. Before, I just had the tinny projector sound and had no desire to install a home-theater system. Rather, I was looking to maybe get a Sonos WiFi speaker for TV sound, so the Freebox solved that problem for me. It wouldn't have been a viable solution if the sound was crappy, but the results were top notch.

Because of its shape and function as a speaker, I had to think carefully about where to position the Freebox Delta -- it's not meant to be stuck in a corner or in a cabinet like other set-top boxes. At the same time, its triangular shape means you can't put the speakers right against a wall. The best way to use it is to place it out in the open next to your TV, so luckily it's stylish enough to go on display. Also, Free supplies it with a CPL (Powerline) adapter, so you can plug it in far from the fiber modem.

The Devialet part functions as a media player and NAS, letting you attach no less than four 2.5-inch hard drives (it comes with a 1TB drive). It can play media in most formats, but it's still a bit rough around the edges as it occasionally stumbles on 4K videos and goes out of sync. For most folks, though, it could take the place of a decent Synology or other NAS.

Finally, there's the alarm system. I found it relatively simple to set up myself, though non-techie folks might not agree. It's a no-brainer to arm and disarm, and the high-definition, low-light camera makes it easy to see who's coming and going. One free call to an alarm-monitoring service per month is included in the package. It can also control other internet-of-things devices like Philips Hue bulbs and Somfy home-automation technology (shutters, power outlets, etc.) Support for more devices is coming later. 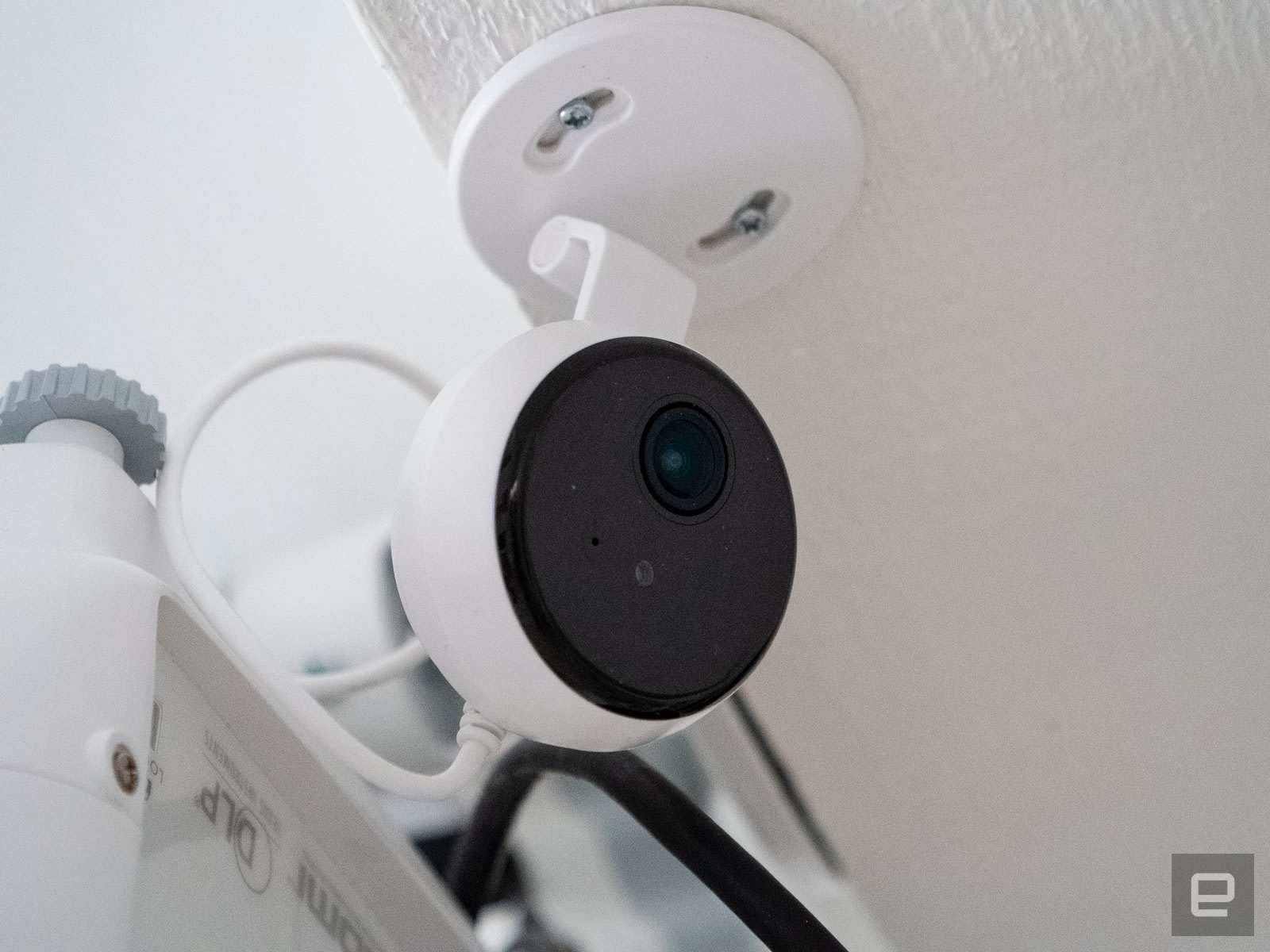 Despite offering a complete, stylish package, the Freebox Delta was controversial from the moment it arrived, for very French reasons. The fancy Devialet sound component costs €480 ($540), which is a lot for a wireless speaker with Alexa. That's on top of the €50 ($56) per month internet, cable and land-line subscription, which is on the high end for fiber in France. If you discount the Netflix subscription, you're paying about €44.

Free gained its name as a value carrier that upended the mobile and fixed internet market, forcing prices down across France. However, the Freebox Delta is now one of the more expensive boxes on the market. That angered many netizens and critics, who found it to be a betrayal of the company's principals. So, despite releasing the most innovative cable and internet box ever, Free discovered it's impossible to please everyone.

The company decided quickly to eliminate the €99 installation fee for existing users, which came on top of the other costs. It's also offering a cheaper Delta S package for €10 less (at €40) with the Devialet speaker unbundled, so buyers can still get fast fiber internet without the need to spend €480 on top of everything else.

The Freebox Delta is a product ahead of its time and out of place in its own market. It's an elegant and innovative product, with features never before offered by operators anywhere, like an alarm system, high-end speaker and media server. 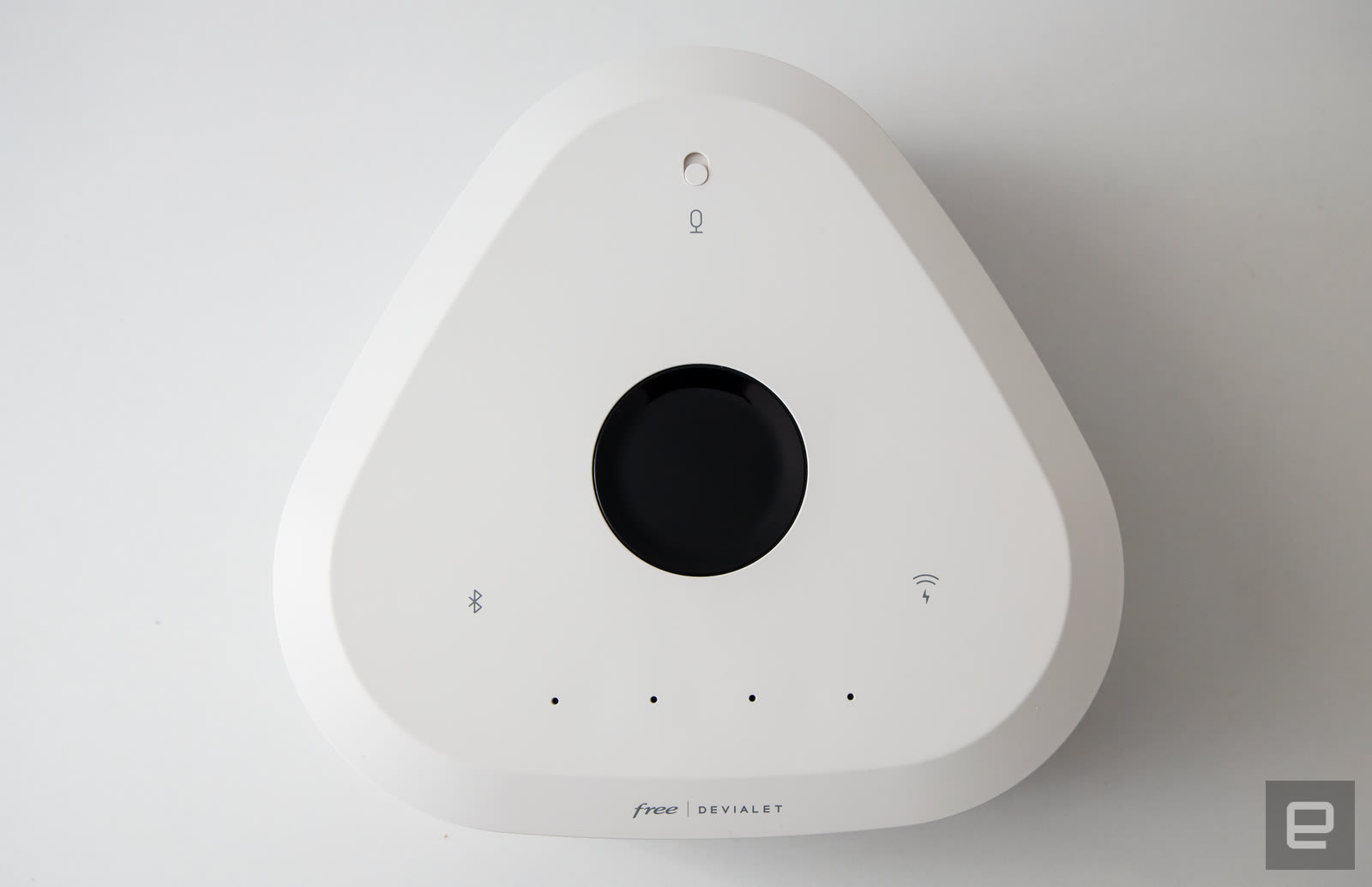 Taken on its own qualities, the Delta was a no-brainer for me as it solved a lot of problems I had, all at once. I was able to get 4K HDR cable TV, reduce the cost of my Netflix 4K package, install an alarm system I needed and have a Hi-Fi, Alexa-enabled speaker in the process.

However, in France, it's a victim of Free's own reputation as a budget carrier. The country is in the throes of a mini-revolt by the gilets jaunes movement protesting the high cost of living. Free is best known for pushing down prices and making mobile and fixed internet accessible to all, so its attempt to introduce a luxury product isn't terribly well timed.

If something like this was introduced in the US, I suspect it would be seen differently. Internet and cable providers like Comcast are normally tech dinosaurs, so it's nearly unthinkable that they'd release something so avante garde. That's without mentioning that fiber internet costs considerably more in the US. So while the Freebox may have stumbled in its own market, for now, it has built a template that American carriers could conceivably follow. Hopefully, someone will, and this very interesting set-top box won't remain a one-off.

In this article: av, buyers guide, Devialet, Fiber, france, Free, freebox delta, FreeboxDelta, gear, hands-on, ISP, Modem, SetTopBox
All products recommended by Engadget are selected by our editorial team, independent of our parent company. Some of our stories include affiliate links. If you buy something through one of these links, we may earn an affiliate commission.