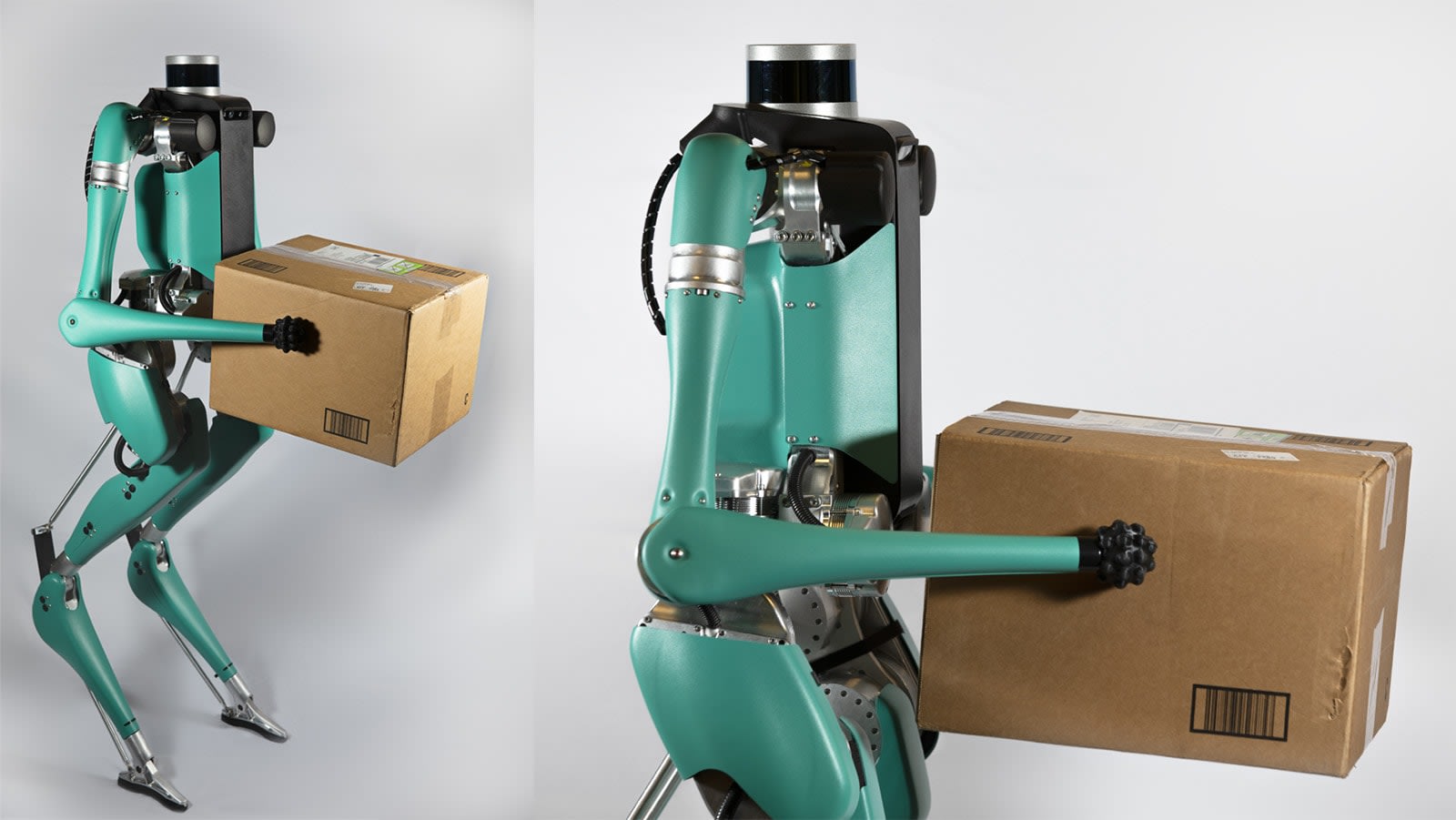 Agility Robotics has unleashed a new model that joins the exclusive club of humanoid robots. "Digit" is the company's first bipedal robot to have four degree-of-freedom arms. It can use those for balance, pushing doors and lifting boxes up to 40 pounds, or even to catch it during a fall. Digit also has a futuristic industrial design that's sleeker than other humanoid bots like Boston Dynamics' famous Atlas.

Agility Robotics is a startup that was born from the robotics department of Oregon State University, much as Boston Dynamics spun out of MIT in 1992. It didn't release a video of the robot, but the ostrich-like bipedal system appears to be similar to its last model, Cassie, shown in action below. Unlike that bot, which was blind and navigated by feel, Digit has integrated sensors including a LiDAR system. Along with an all-new control system, that will allow it to navigate cluttered rooms or stairs.

It'll likely be awhile before Digit can catch Atlas, which can leap, do Parkour, and even perform backflips. Still, it's early days for the bot and it's upgradeability will allow it to learn new tricks down the road. Best of all, it can be up and walking after five minutes out of the box, even for users who aren't familiar with bipedal locomotion.

Agility's CTO Jonathan Hurst said in an IEEE Spectrum article that the company has big plans for the humanoid robot in the delivery, telepresence, entertainment and other sectors. "Their impact could be as big as the automobile in terms of changes to lifestyles, and even traffic patterns and aspects of city layouts, where these robots promise to transform logistics and package delivery," he said. It'll be a while until robots like Digit are helping deliver pizza and Amazon orders, but they could certainly reduce the need for vehicles and autonomous wheeled robots.

And yes, it will go on sale. "We developed Digit for the much larger audience of users who wish to explore broader applications that are enabled through legged mobility, rather than focusing only on the mobility itself," said Agility CEO and co-founder Dr. Damion Shelton. Agility Robotics will release pricing in mid-2019, with deliveries starting in Q1 2020.

Via: IEEE Spectrum
Source: Agility Robotics
In this article: AgilityRobotics, Bipedal, Cassie, Deliveries, Digit, gear, robots, tomorrow
All products recommended by Engadget are selected by our editorial team, independent of our parent company. Some of our stories include affiliate links. If you buy something through one of these links, we may earn an affiliate commission.