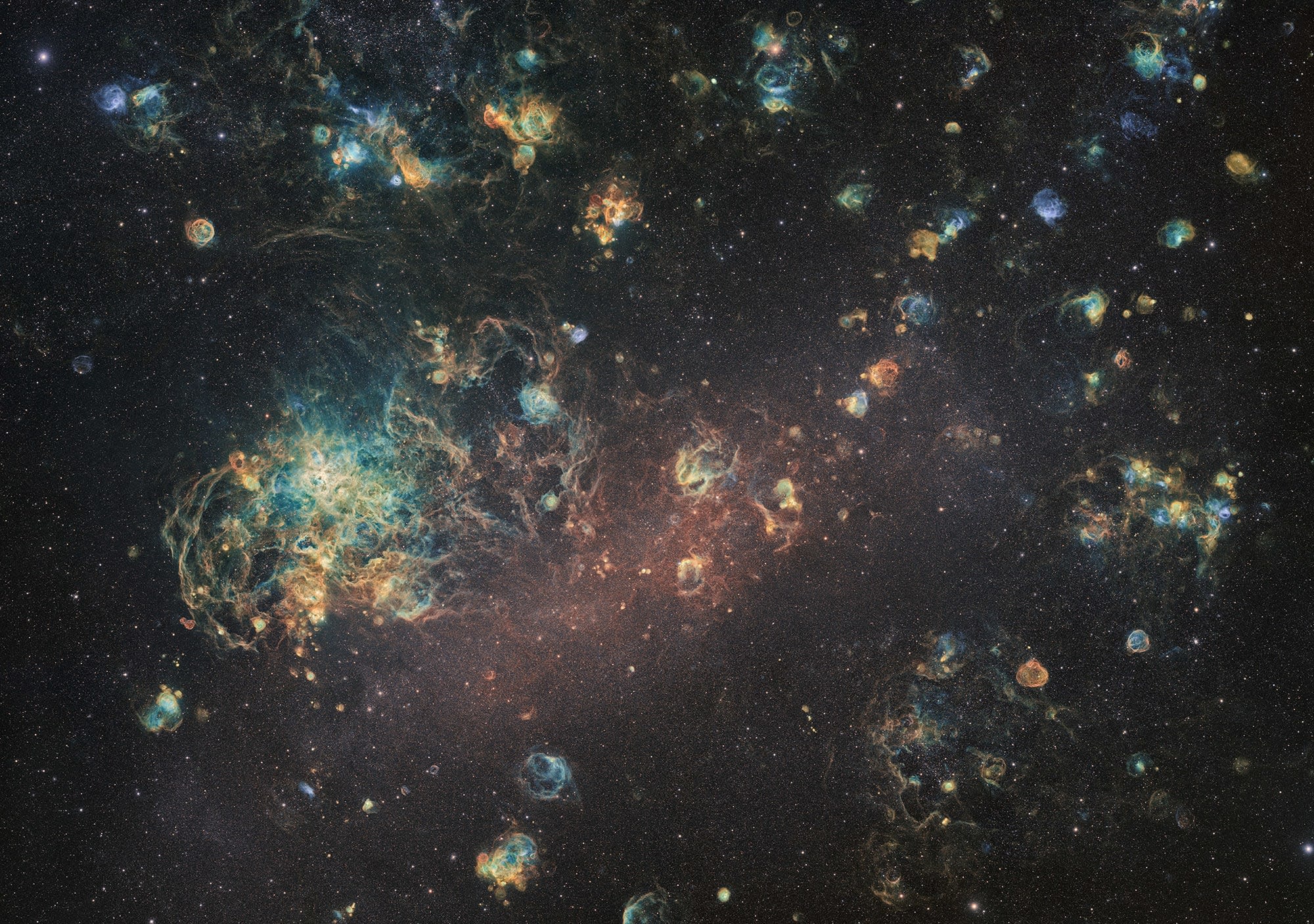 The Large Magellanic Cloud is what Austin Powers might call a quasi galaxy, just one percent the Milky Way's size and orbiting it like a hanger-on. At a distance of 163,000 light-years from Earth, you might think it would take a space telescope like Hubble or a huge observatory to do it justice. But the 204-megapixel image above, showing the Magellanic Cloud in incredible, colorful detail, was shot by a small group called Ciel Austral using a telescope in Chile just 160mm (6.3 inches) across.

Ciel Austral is a team of five very enthusiastic amateur French astronomers, Jean Claude Canonne, Philippe Bernhard, Didier Chaplain, Nicolas Outters, and Laurent Bourgon, who own and operate their own telescope in northern Chile. The 14400×14200 image was stitched together from nearly 4,000 separate images that required 1,060 hours (6.3 weeks) of exposures shot from July 2017 to January 2019. It took two computers eight days to stitch together the photos, and a further two months to process the 620 gigabytes of data.

If you could warp yourself to the Magellanic Cloud, it wouldn't look like the dreamy, painterly image pictured above. Much of the image is made up of false colors that show the different elements present in the image. Different colors represent hydrogen, sulfur and oxygen III, emphasizing the cloud-like high-density gas nebulae in a way that a standard visible light image can't.

The image shows the birth and death of stars and the aftermath, including supernovae remnants, planetary nebulae, and white hot star-forming regions. Along with the enhanced color version that uses filters to peer through dust and gas, Ciel Austral also posted a narrowband image (below the main image) that gives a better idea of how the galaxy would look to in visible light. Spoiler: It's still eye-wateringly beautiful.

Update 5/16/2019 4:30 AM ET: The article originally stated that the image was 240 megapixels in size, but it's actually 204 megapixels. The post and headline have been updated with the correct information. (Thanks, Adrian!)

Via: This is Colossal
Source: Ciel Austral
In this article: 240-megapixel, galaxy, gear, image, space, TheBigPicture, TheMagellanCloud, thenewbigpicture
All products recommended by Engadget are selected by our editorial team, independent of our parent company. Some of our stories include affiliate links. If you buy something through one of these links, we may earn an affiliate commission.