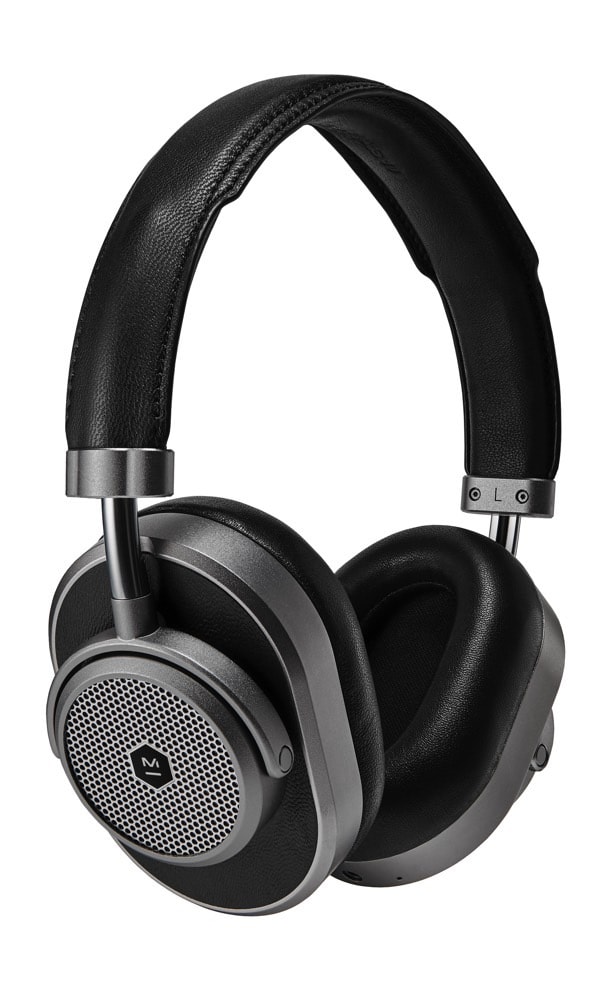 Master & Dynamic has been making some of the world's best-looking headphones since 2014. The company uses premium materials like leather and anodized aluminum for its high-end products, while the competition settles for cheaper plastic even on flagship models. Despite a lineup that boasts on-ear, over-ear, in-ear, wired, wireless and true-wireless options, M&D still hadn't entered a key category: active noise-cancellation. With the $499 MW65 introduced earlier this month, the company is making a belated debut, all while maintaining its premium style -- and premium price. Master & Dynamic took its time to deliver a set of noise-cancelling headphones, and the wait was well worth it. They have a more refined design than most of the competition, but the MW65 are expensive. Even though the premium materials and stellar sound are better than many of M&D’s rivals, the price tag is hard to overlook.

How would you rate the MW65?
We want to hear what you think. Post a quick review now to join the conversation!
Write a review

The first thing that always strikes me when unboxing a piece of Master & Dynamic gear is the product design. As someone with a design background (and who tests a lot of headphones), it's nice to unwrap audio accessories that aren't made from plastic and that don't feel cheaper than they should. The MW65 continues M&D's heritage of leather and metal that began on the original MH40. Not only do those materials return, but trademark aesthetic details like the metal grilles on the outside of the earcups and other textured surfaces exhibit keen attention to detail.

The MW65 closely resembles its predecessors, the wired MH40, the over-ear MW60 and the convertible MW50+. In fact, the headband is identical to the one on the MW50+, and the panels on the earcups are flat like the MW40 instead of the MW60's slightly rounded look. Unfortunately, the earpads aren't magnetic like other M&D headphones. You can remove them, but swapping them out is more cumbersome than before. As was the case on previous models, the onboard controls sit on a ring outside the right earcup. They aren't on the edge of the earcup itself, but rather on a circular section that sits on top of it. This is also the section where a hinge connects the earcups to the headband. 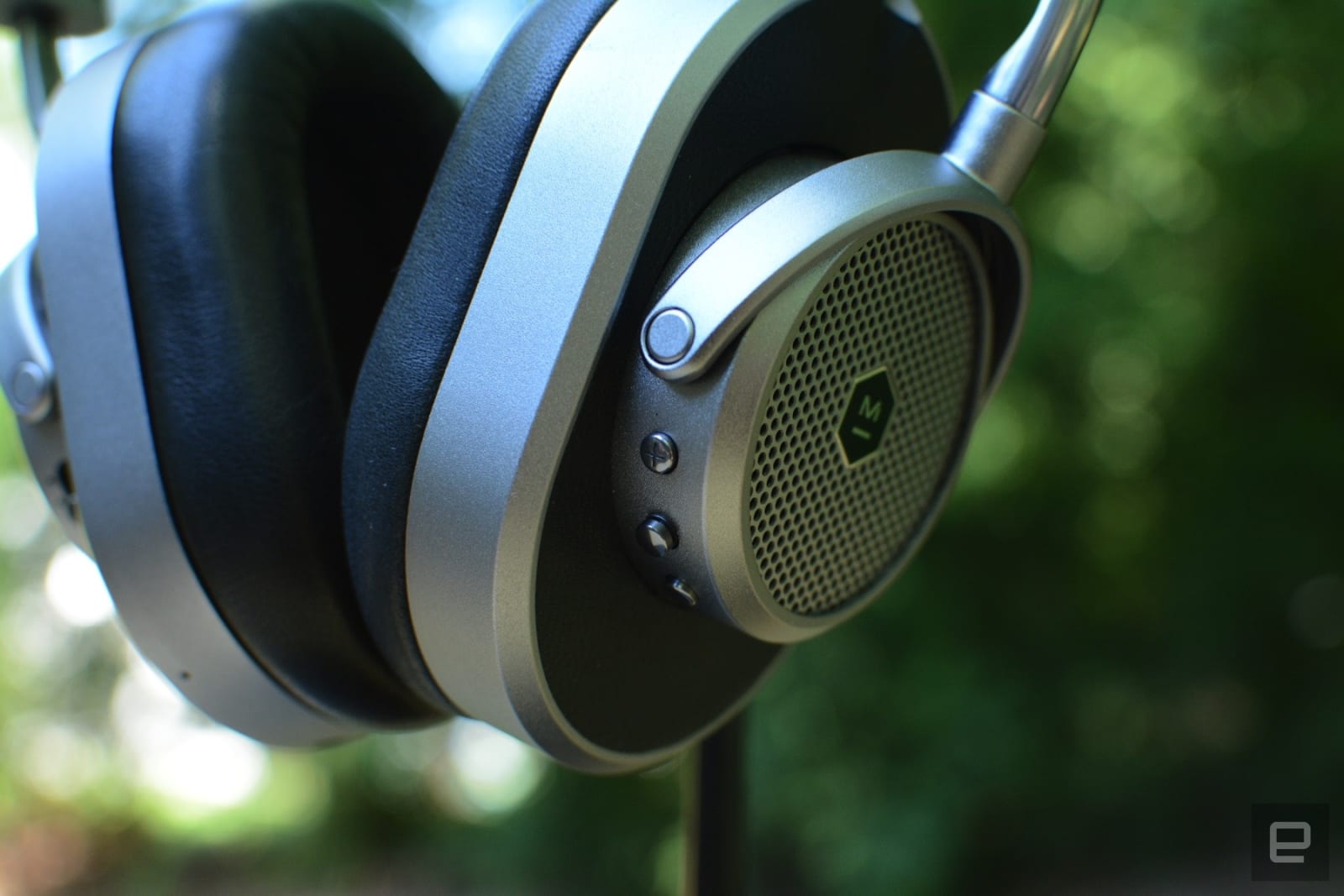 A lot of headphone companies are replacing physical buttons with touch controls, especially on their high-end or flagship wireless models. This is fine when they work well, but based on my experience, touch controls can be frustrating. And when you want to do something simple like adjust the volume or skip tracks, the last thing you need is a struggle. Master & Dynamic kept the physical controls it used on previous models, where a group of three buttons do all the heavy lifting. Volume buttons are on the outside, while the center button handles play/pause with a single click. A double click on that center control skips tracks forward; a triple click skips backward; and a long press activates Google Assistant or another virtual assistant. Although the MW65 is designed for Google Assistant, you can use it with Alexa, Siri and others. Long-press on the volume up button to receive Google Assistant notifications; you can always long-press on the volume-down button to disable it altogether.

M&D has made switching from Google Assistant to another option very easy. Simply holding down both the ANC button and that center play/pause control for five seconds enables a hands-free mode that allows you to use your device's native assistant. When you want to switch back, repeat the same sequence.

The one difference from those previous models is that the MW65 has a dedicated button for noise cancellation. With a control on the left earcup, you can switch between high (planes, noisy streets), low (quieter or windy environments) or turn it off entirely. There's also a battery-level indicator on the left side, nestled up against the power and Bluetooth-pairing toggle. It flashes red, orange or green depending on how much juice you have left. A separate light tells you the pairing status (pairing mode vs. paired), so you aren't left guessing there, either. 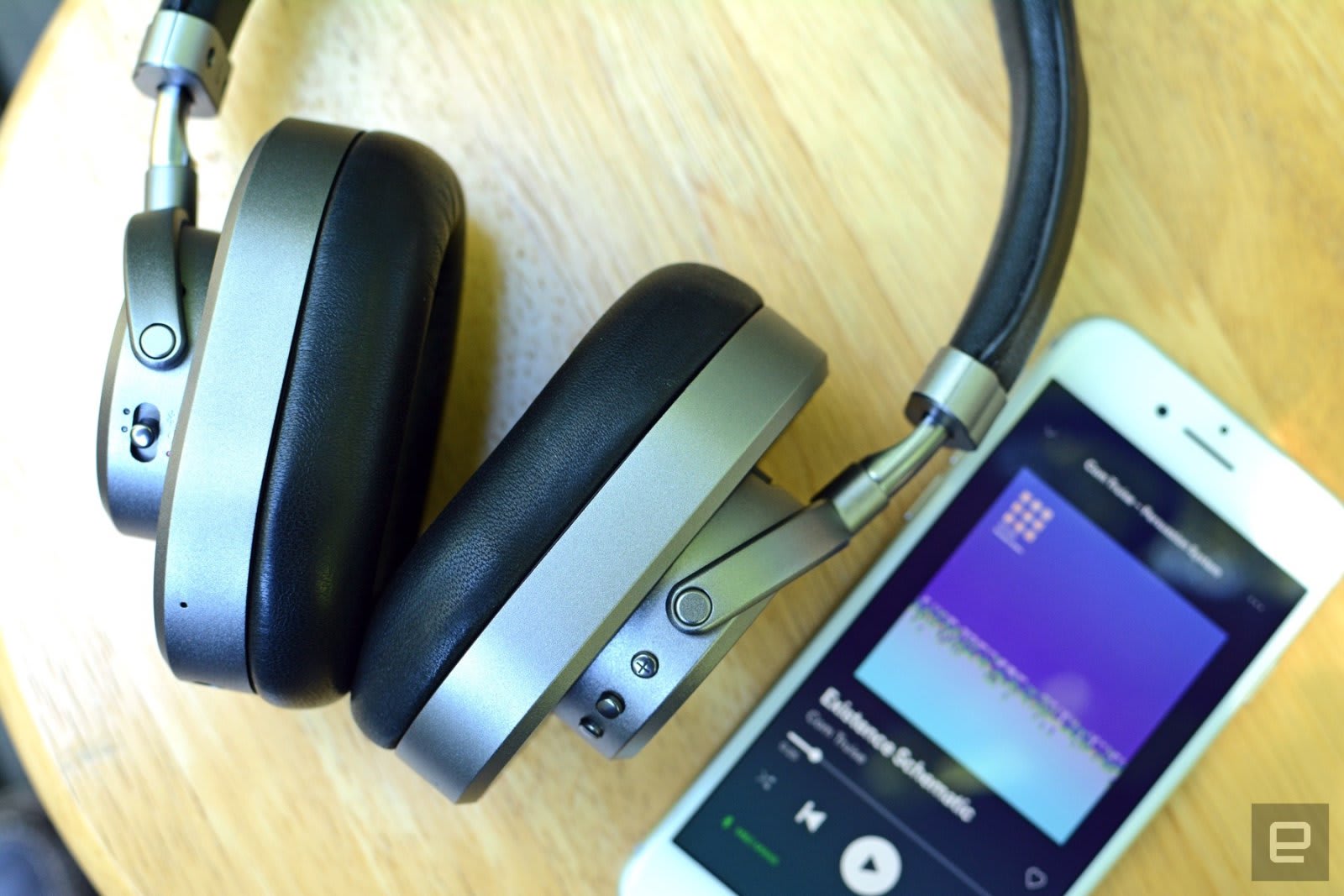 Master & Dynamic took a while to release its first headphones with active noise cancellation. The technology can be tricky: You're trying to block out environmental noise without affecting the overall audio quality inside the headphones. Companies like Bose and Sony take a scorched-earth approach to this, doing whatever it takes to kill all (or very close to all) external sound. Sure, they mostly succeed at that, but the Bose QC35 II and Sony 1000X series also aren't the best-sounding wireless headphones out there. M&D took a more even-handed approach to ANC, and the overall audio quality on the MW65 is better for it.

The company said "vigorous research" helped it created ANC technology that wouldn't compromise its "signature acoustics." The wait was worth it. Master & Dynamic succeeded in keeping its warm- and natural-sounding audio profile, a tuning setting that handles most genres well. Some of the earlier M&D headphones lacked bass and could've used more volume, but that's not the case with the MW65. Electronic tunes like Com Truise's Persuasion System, hip-hop tracks from Wu-Tang's Of Mics and Men and the blitzing metal of Oh, Sleeper demand a solid dose of low-end tone. The MW65 accommodates them all without being overpowering. Instruments remain crisp and clear, and there's a depth to the sound that doesn't feel overly compressed inside the cans. 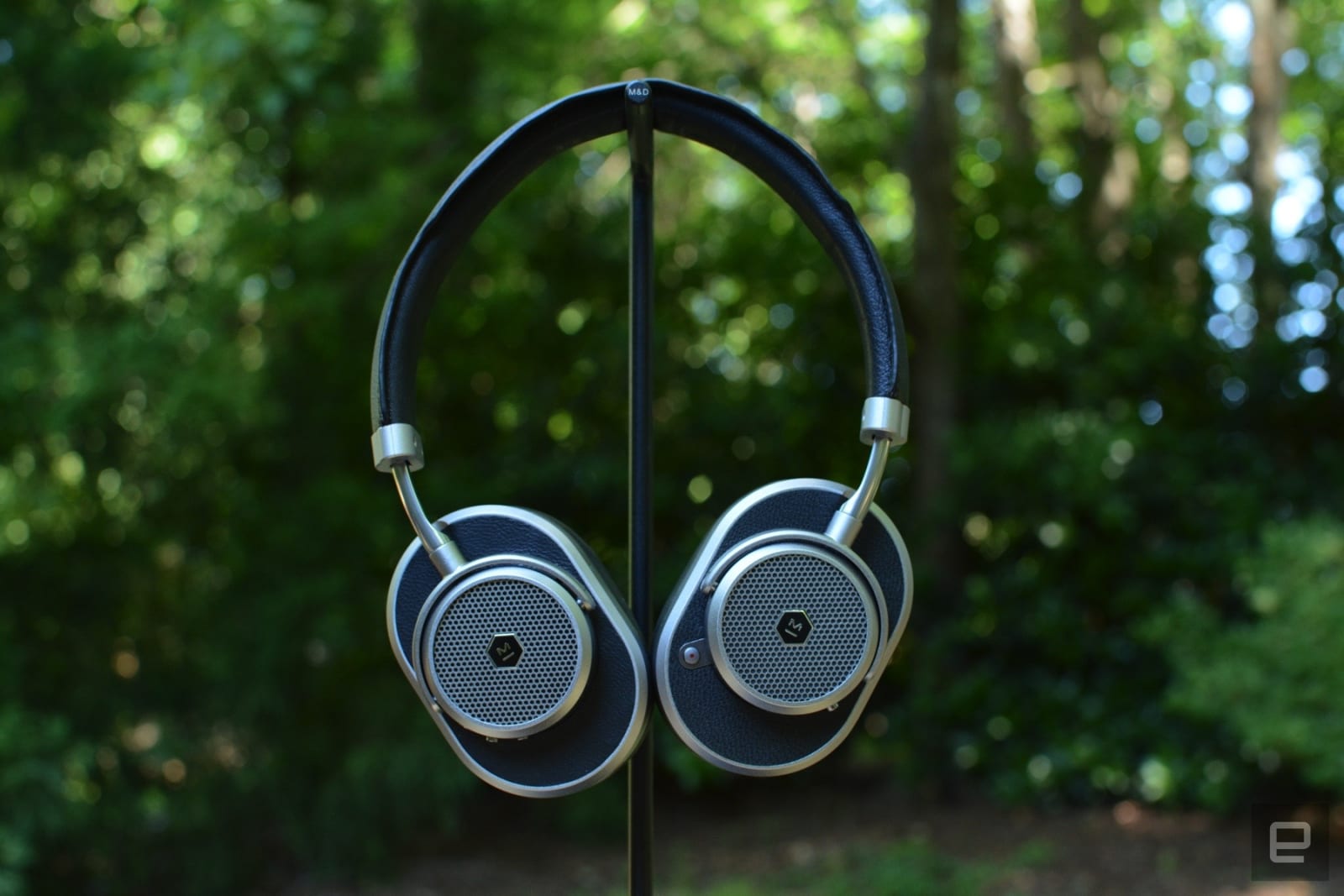 The audio does change noticeably between noise-canceling modes, especially when you turn off ANC entirely. The best sound is with noise-cancellation on high -- that's when the headphones give the audio the most depth. The low setting is serviceable, but you'll notice a big difference between high ANC and turning it off. None of this is a bad thing, per se; it's just something you'll want to be aware of. Even when set to high, the ANC doesn't "block out the world," like my colleague Andrew Tarantola described Sony's original 1000X. However, since the audio is so much better on the MW65, you probably won't mind, unless you frequent superloud spots.

It's impressive that M&D used premium materials and added noise cancellation all while making the MW65 its lightest headphones yet. They weigh in at 245 grams (8.64 ounces). That's almost 10 grams lighter than the Sony 1000XM3 (254.86 grams/8.99 ounces). Trust me, the difference is noticeable, especially after you've been wearing either set for an hour-plus.

The MW65 felt comfy even during my longest listening sessions, which often last up to three hours. The lambskin-wrapped earpads are soft, but they offer the appropriate amount of stability so you can feel the ring of the earcup beneath. The headband isn't too tight but provides a secure fit without pinching your head. 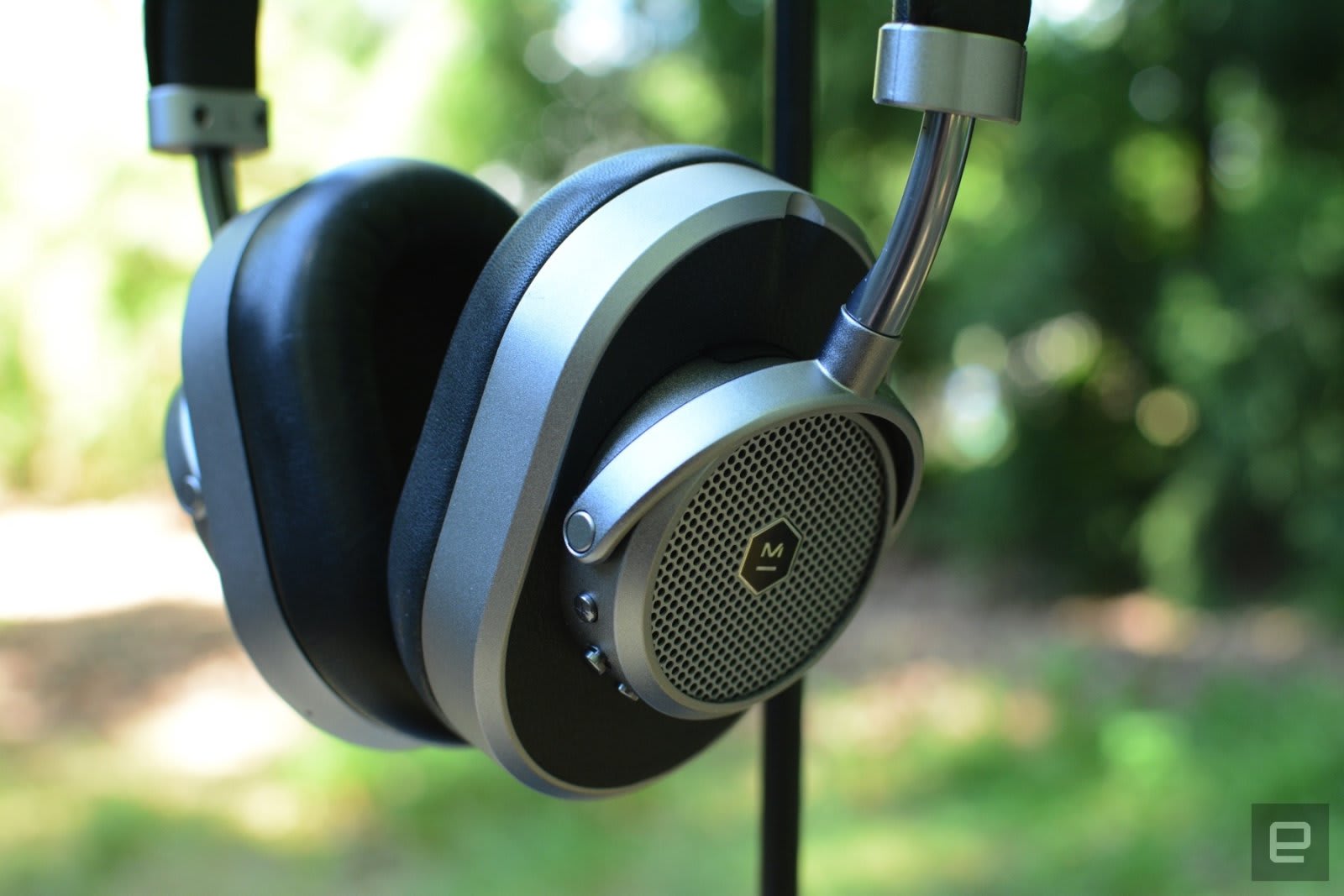 Master & Dynamic promises up to 24 hours of battery life, significantly less than Sony offers with its 1000XM3. The MW65 does have a quick-charge feature that gives you 12 hours of playback in 15 minutes. I found that I had to plug in these headphones about every third day, after steady use during working hours. I did employ that quick-charge feature more than once, which got me through the end of the day until I could plug the MW65 in overnight. Yes, the MW65 can manage is at least six hours less than some of the competition, but I doubt you'll need that extra time.

At $499, the MW65 costs $150 more than the list price for both the Bose QC35 II and Sony 1000XM3. Those two models still top my list of the best wireless headphones even though they've been out for a while. What's more, you can typically find them on sale for even less, so you really have to like M&D's refined design in order to justify the higher price. A lot of the features are similar too, including easy access to a virtual assistant. If your goal is to silence the world around you, the noise cancellation on Sony's 1000XM3 outperforms the MW65, and I also prefer it to the QC35 II.

After all that, this is another great product from Master & Dynamic where price is my main gripe. Yes, the MW65 looks great, and yes, it sounds really good. Sure, the materials used here are much better than basic plastic. And even though the noise cancellation doesn't kill all noise, it does its job well without sacrificing great audio in the process. The MW65 are nearly the perfect headphones. It's a shame most people won't pay what it costs to find out.

In this article: active noise cancellation, audio, av, bluetooth, gear, headphones, master & dynamic, master and dynamic, mw65, noise cancellation, noise cancelling, review, thebuyersguide, wireless
All products recommended by Engadget are selected by our editorial team, independent of our parent company. Some of our stories include affiliate links. If you buy something through one of these links, we may earn an affiliate commission.