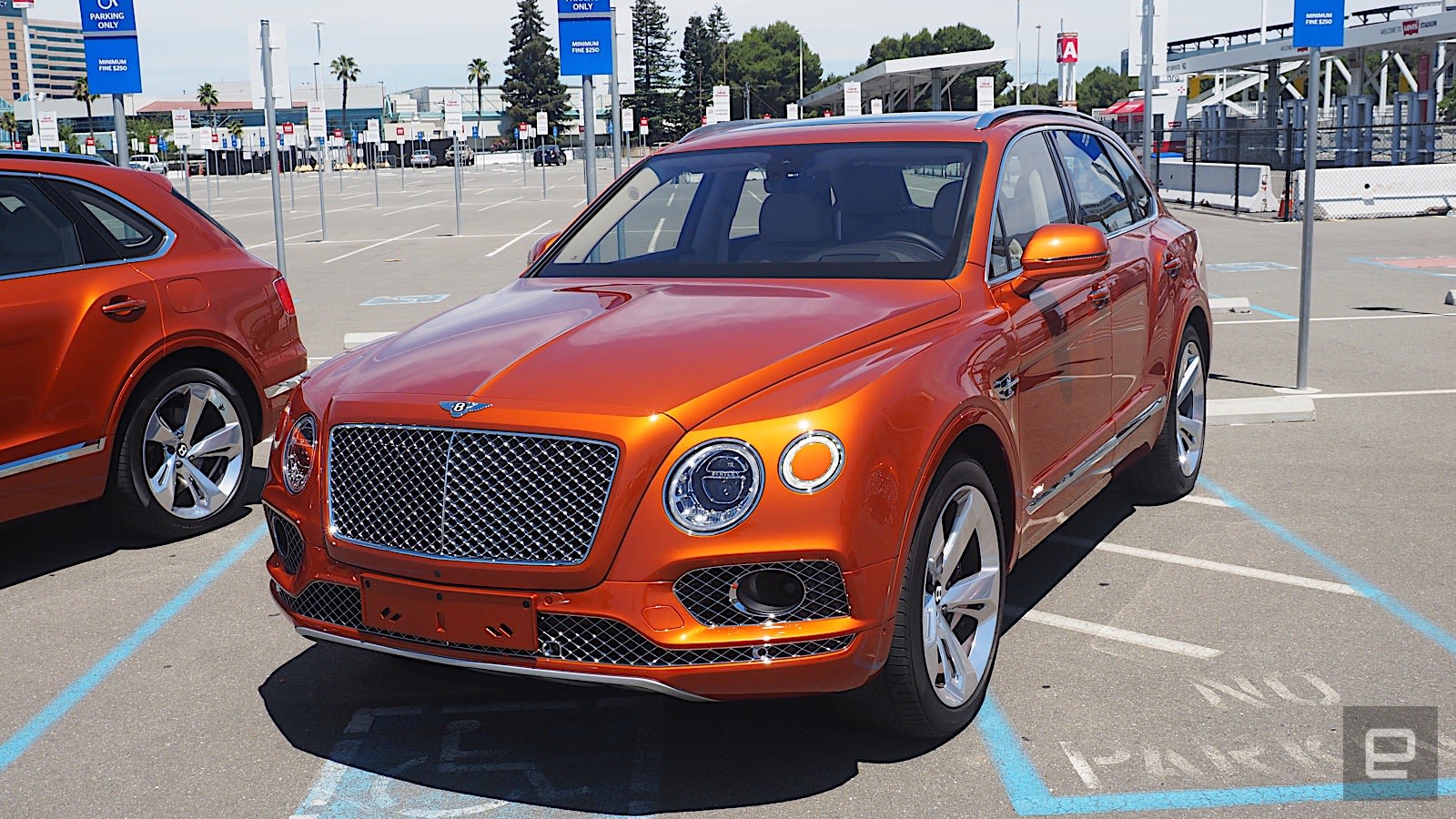 One could fairly assume that riding in an SUV as large, expensive and, well, as orange as the 2019 Bentley Bentayga would turn a few heads. I certainly know I did. But as I found out during a test drive through Silicon Valley last Thursday, this full size SUV hybrid makes for a surprisingly sedate ride.

The Bentayga is both Bentley's first SUV as well as its first hybrid vehicle -- a "first step towards electrification" according to one of the company's reps. The hybrid is actually the fourth iteration of the line, which was first released in the US and UK in 2015 with a W12 gas, V8 gas and V8 diesel alternates.

This model features a turbocharged 335 hp, 3-liter V6 paired with a 94kW (126 hp) electric motor, putting out a combined 443 horses when used together. You can run the vehicle using just the gas engine to recharge the battery, run both for peak performance or just the e-drive when running errands around town. Being a plug-in hybrid, the Bentayga's battery can also be charged directly using a household outlet in 7.5 hours or in just under 3 hours if utilizing a 220V power supply.

On a full charge, the Bentayga offers around 30 miles of electric range. Although, as we quickly discovered on the test drive, operating accessory features such as preconditioning the vehicle's interior climate drains the charge at an accelerated rate. Even in a city as geographically constrained as San Francisco, 30 miles is still short enough to give me severe range anxiety.

Bentley reps pointed out that if worst comes to worst, the gas engine would simply kick in for a while until the battery was refreshed. The infotainment system's navigation feature also offers a map overlay, referred to as the "fried egg" by Bentley's design team due to its shape, showing you how far you'll get on electric power given the current driving conditions, terrain and traffic.

The vehicle's build quality is exactly what you'd expect when giving Bentley $156,900. The Bentayga is opulence personified. The interior is lined with rare wood accents and and chrome knobs over buttery soft leather. The company offers seven standard paint colors and five hues of leather. If you want to get fancy with it (and when dropping more than two years worth of my annual salary, why wouldn't you), Bentley offers 100 customizable paint colors, including a dozen duo-tone options, and 15 different colors of cow skin. The company will even lend you a design consultant who can help you tweak the color schemes based on your style preferences, favorite colors -- even mirror the aesthetics of your favorite hotel -- to fully personalize your ride.

The infotainment system is no less impressive. The primary monitor is an 8-inch touchscreen with a 60GB HDD, CD player, satellite and terrestrial radio. It offers GPS Navigation and voice control with text-to-speech as well. The backs of the front headrests have their own touch screens mounted to them for the rear seat passengers. To ensure that everybody remains entertained throughout the trip, regardless of how many people are riding along, the Bentayga offers the first commercially available tri-SIM LTE connection. Originally developed for military applications, this connectivity splits the data link into three separate streams so that the various connected devices in use aren't stepping on each other's toes.

"It allows us to seamlessly transmit into the vehicle at very high data rates," Bentley's head of marketing strategy, Marcus Abbot, told reporters ahead of the drive, "so that customers in the car can use multiple devices, and experience media interaction at speed, which is almost impossible to do today, with today's in car Wi-Fi offers."

We tried this feature during the test drive but given that we were riding around in the european versions (which were not built for use on American LTE networks) we were only able to squeeze a paltry 0.85 Mbps from the connection. Bentley reps assured me that the connectivity speeds would be very much improved on the US production models.

The driving experience itself was unfortunately not as impressive as the entertainment options and build quality. I got the feeling that the Bentayga hybrid doesn't quite know what it's supposed to be. It was very clear that the hybrid model was simply adapted from the existing platform, which you can see it in the odd dual-fuel gauges -- one for the gas tank, the other for the battery. Similarly, the speedometer dials were all listed in KPH while the holographic HUD showed speeds in MPH. This is likely due to us riding in models intended for UK consumption and won't be the case once the Bentayga arrives in the US but it was still disconcerting. I couldn't decide if the Bentayga is meant to be a chauffeured experience like a Rolls-Royce or a BMW-esque "ultimate driving machine." It's a bit of both and I'm not sure if that really works.

The handling was smooth, like a stately Sherman tank, as the vehicle's suspension floated over potholes and speed bumps. Yet, despite the all-time 4WD, the vehicle is so large that I did not feel comfortable slaloming down the twisting roads of Highway 1 -- regardless of whether it was in Sport, Bentley, Comfort or Custom driving modes. I certainly would think twice before trying to take it to Santa Cruz via the claustrophobic confines of Highway 17. And for a vehicle that is so luxurious and focuses so heavily on the driving experience, I was amazed by how deeply the various driver assist features like lane keeping and blind spot detection were buried in the infotainment system's menus.

Perhaps the oddest bit of this driving experience is not with the vehicle itself but its smartphone app. MyBentley, available for both iOS and Android, is part remote control (ie remote battery charging and vehicle status reports), part maintenance scheduler and part social media hub. The network, as Bentley calls the social aspects of the app, offers "exclusive services, exclusive events" to the company's 12,000 customers.

"If we could get all of our customers onto the network would be at about 100,000 high net worth individuals, which makes it a really, really very powerful community of people," Abbot explained. Users create their own content, he continued, and are not managed in any way by the company.

"We get a lot of insights from it as well, we've started to do some research directly with customers through the app on this as well," he said. "And we see this peer-to-peer relationship when they get through the network is really, really valuable to them as well."

Wildest of all, the app also serves as a hub for Bentley On Demand, which is exactly as bougie as it sounds. If you, a high net worth individual, are travelling to Los Angeles, Miami or New York and don't want to demean yourself by riding in a limo or town car like some plebeian, Bentley will lend you a one of its vehicles while you're there. Company reps did not disclose how much this added service would cost beyond it being "a very reasonable rate" but if you have to ask, you can't afford it.

The Bentayga Hybrid is slated for release in the UK by the end of this year and in the US by 2020. The model will make it to the Chinese market within a few years as well.

In this article: Bentayga, Bentley, gear, hands-on, Hybird, SUV, TestDrive, transportation
All products recommended by Engadget are selected by our editorial team, independent of our parent company. Some of our stories include affiliate links. If you buy something through one of these links, we may earn an affiliate commission.