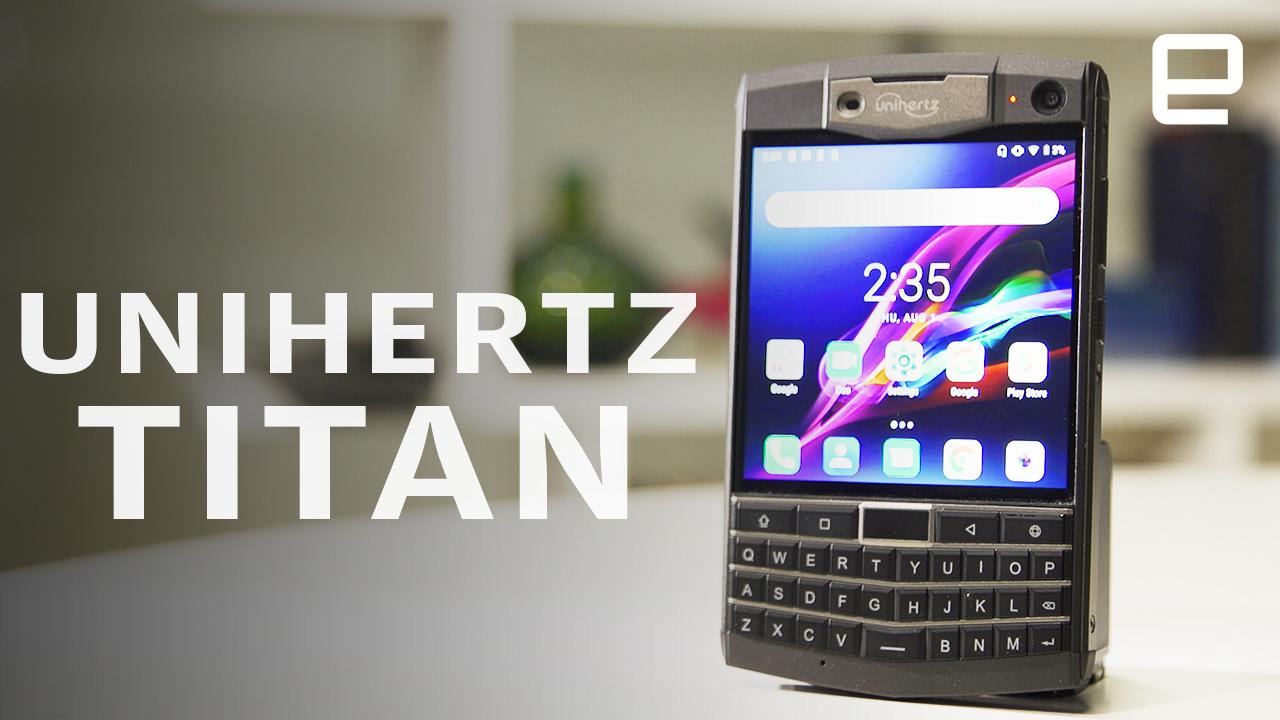 Judging by the strange, tiny phones it made in the past, Unihertz seems like a company that just sort of builds whatever it wants. When you consider just how homogeneous smartphones have become over the years, that approach starts to feel really refreshing. Here's a brand that doesn't care about taking over the world; it just wants to make weird, but functional, shit. And its latest product, the Unihertz Titan, is nothing if not weird.

Just look at it. It's a whopper of a smartphone, with a massive 6,000mAh battery, a physical QWERTY keyboard, that runs an up-to-date version of Android, selling for somewhere in the neighborhood of $250. And beyond all that, people were quick to point out the strong similarities between the Titan and BlackBerry's 2014 Passport: Both had oddball square screens, touch-sensitive, three-row keyboards and very wide proportions. That by itself is pretty fascinating. Of all the devices that Unihertz could've cribbed notes from, it chose the bizarre last gasp from a company rapidly losing relevance.

To me, at least, the weirdest thing about the Titan is that it' should probably be really lousy, but it isn't. It's just pretty lousy. I've been using an early model for a while now, and even after all this time, I can't say that I've fully gotten used to it. (In fairness, it's meant more for die-hard QWERTY fans, professionals who need rugged hardware or outdoors-y types, and I am none of those things.) Even so, it's not hard to appreciate the Titan for what it is: a low-risk, niche phone that still needs a lot of polish.

Performance: The Titan is a roughly $250 phone, so expecting flagship-level performance is insane. (That is, unless you're Xiaomi, churning out devices like the Pocophone.) With all that said, the octa-core MediaTek Helio P60 chipset in here is no slouch; it's paired with 6GB of RAM and it's been more than enough for the email triaging and light gaming I do regularly. There's very little in the way of slowdown during average use, and unless you find yourself playing really heavy-duty games frequently, the Titan should handle your routine without much trouble. I should also point out that the P60 chipset here also has a dedicated co-processor for AI functions, but it's one of those things you're not likely to see much benefit from during day-to-day use. (Well, for now anyway.)

That battery: To no one's surprise, squeezing a 6,000mAh battery into the Titan means it'll run for a long time before needing to be plugged in again. Your mileage will obviously vary depending on how hard you push this thing, but in the nearly two weeks I've had the Titan in my possession, I've only had to plug it in once. (Granted, I wasn't using it super-heavily.) Not having to worry about whether the phone I'm using will die soon leads to a peace of mind that almost completely offsets the phone's egregiously chunky body.

Clean-ish Android: Unlike the current crop of Android-powered BlackBerrys, the Titan comes loaded with a lightly tweaked build of Android 9.0 Pie. That's almost certainly because Unihertz didn't have to (or want to) spend any extra time hardening the underlying OS for privacy the way BlackBerry/TCL do now. And people who are really concerned about device security should probably still invest in something like a Key2. That said, props to Unihertz for mostly leaving Android Pie alone here.

The only real additions of note are a third-party keyboard designed to work in tandem with the physical one, a truly useless Notes app that caps text at 1,500 characters, and the Toolbox. That's where you'll find tiny apps like, uh, the compass, bubble level, protractor and plumb bob. I've never used a smartphone to help with home renovation projects, but if I did, the Titan would probably be the device I turned to.

What I can live with

Design: Like I said, this phone really isn't meant for people bound to a desk all day. Because of that, the Titan looks and feels like a BlackBerry Passport wearing a heavy suit of armor. For people who drop their phones constantly, or who frequently work out in the field, this ruggedized bulk serves as a valuable insurance policy. For a person who writes things in an open-floor plan office dotted with CB2 conference tables, it's total overkill.

It's not all bad, though: The Titan still squeezes into my pockets without too much drama, and it's nice knowing I could treat the thing like garbage and not have to worry about destroying the screen or drowning it in a pool. The phone's heft does means it's difficult to use with one hand, but c'mon — the Titan has a physical QWERTY keyboard. If you actually bought one of these, you probably knew exactly what you were getting into.

The square screen: Titan owners will spend a lot of time looking at this square, 4.5-inch display running at 1,440x1,440, and it's not half-bad. (In case you were curious, the screen's size and resolution are almost identical to the BlackBerry Passport.) It's plenty bright for prolonged outdoor use, and the color reproduction is nothing to sneeze at either. It's no Dynamic OLED, but what did you expect? The bigger concern here is that the modern mobile web, not to mention most apps, expect longer, taller screens. Whether you're skimming through Engadget or poking around on Instagram, expect to do a lot of scrolling.

The cameras: If you really care about camera performance and don't want to drop a crazy amount of money on a phone, buy a Pixel 3a and be done with it. The Titan simply can't compete, not that it's really supposed to. Still, you can get some solid-looking photos out of the Titan from time-to-time: some of shots I captured offered nice detail and occasionally dramatic colors, and they were nice enough that I could post them to Instagram or Facebook without worrying too much. The camera does, however, totally bomb in low light — expect lots of blur and grain, to the point where I deleted most of those dark shots on sight. Meanwhile, the 8MP front-facing camera... well, it exists, and it will take selfies. Just not very good ones.

The keyboard: Upon seeing the keyboard for the first time, I had hope that Unihertz might be onto something. It's not exactly BlackBerry good but sometimes it feels pretty close. The keys themselves are flat and don't travel very much, but they click into place in a way that'll feel really familiar to old-school BlackBerry fans.

You can even turn the keyboard into a fully touch-sensitive trackpad, which is great when you're scrolling long stories and webpages and don't want to keep reaching for the touchscreen. That said, this feature so closely aligns to the way certain BlackBerrys work that I wouldn't be surprised if BlackBerry and/or TCL slapped Unihertz with a cease-and-desist.

The thing is, just because these keys look like they come off a BlackBerry doesn't mean they're particularly pleasant to use long-term. Part of the problem is the keyboard's design itself. We're working with three wide rows of keys, which means your thumbs have to physically travel more than they did on narrower devices like the Key2.

If you loved the BlackBerry Passport, you might be alright here, but for me, typing at high speed was nearly impossible. There's no way to punctuate from the keys themselves, either; you'll have to reach up to tap the keys that appear at the bottom of the touchscreen. In other words, you're going to have to retrain your muscle memory almost entirely.

The same was true of the BlackBerry Passport, but Unihertz's approach isn't helped by lousy keyboard software. Its auto-correction is largely useless, leaving me to go back and fix more typos than I should have to. And any text input software that doesn't know to capitalize letters when I start a new sentence is dead to me. For a keyboard like this to work elegantly, it needs thoughtful software to support. BlackBerry got that; Unihertz doesn't. Hopefully, some future software updates could help out here.

Oh, and it might just be an issue for my test unit, but the backlighting on this keyboard is just terrible. The keys are lit up from the sides, which means only some are lit correctly — all the buttons in the center barely light up at all. 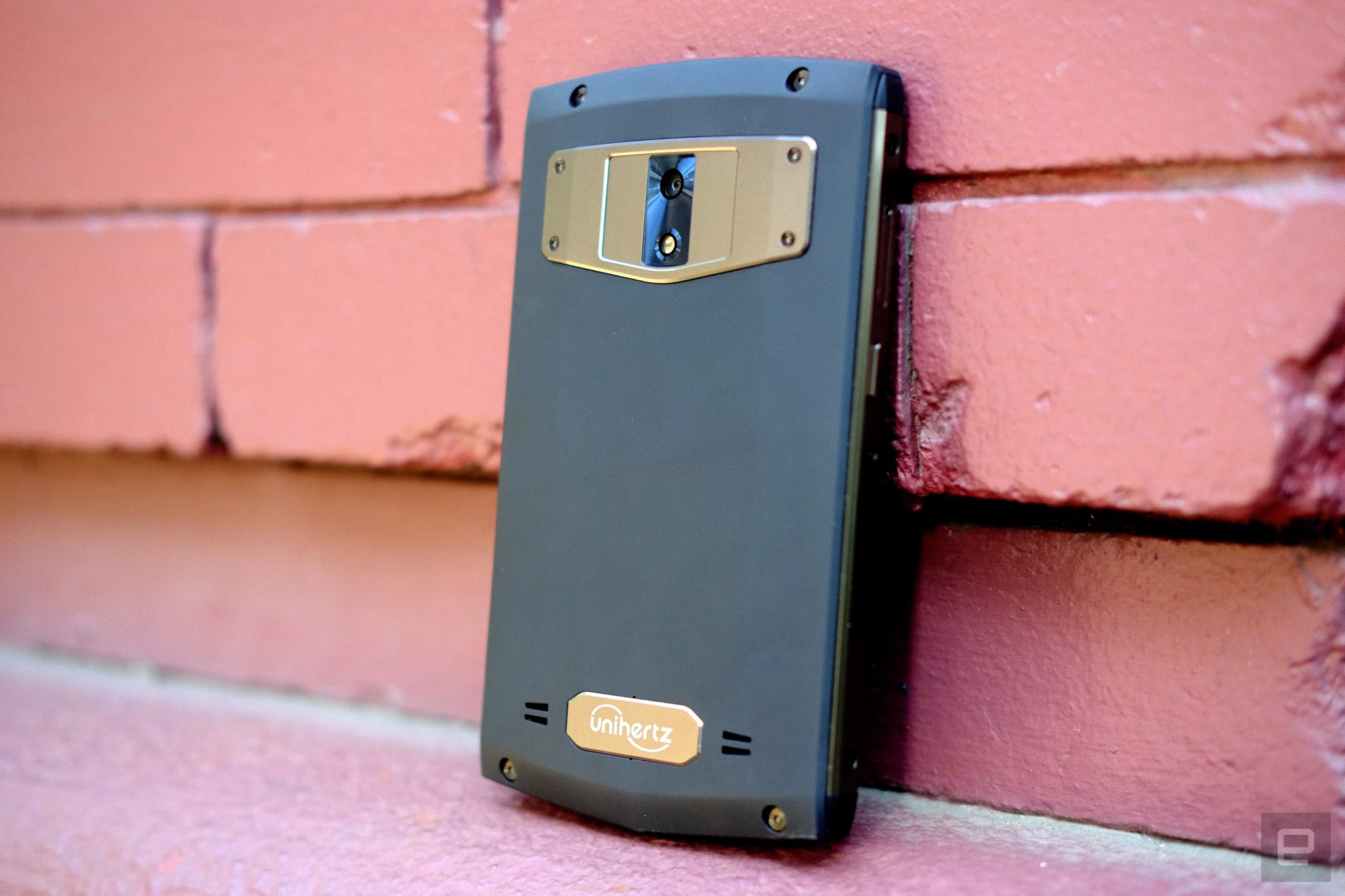 Like I said earlier, the Titan I've been using isn't final. Maybe it could be worth using after it gets some extra polish. The smartphone fundamentals are largely well taken care of, and if nothing else, the Titan largely packs a lot of weirdo QWERTY charm. Anyone looking for the second coming of the BlackBerry Passport, though, will probably come away a little disappointed with this keyboard. It's not a BlackBerry. It doesn't work as well as a BlackBerry. It needs a lot of finessing. Still, if you're on a job site and seriously want a physical keyboard, this is basically your only option, and it'll do in a pinch.

In this article: gear, hands-on, mobile
All products recommended by Engadget are selected by our editorial team, independent of our parent company. Some of our stories include affiliate links. If you buy something through one of these links, we may earn an affiliate commission.