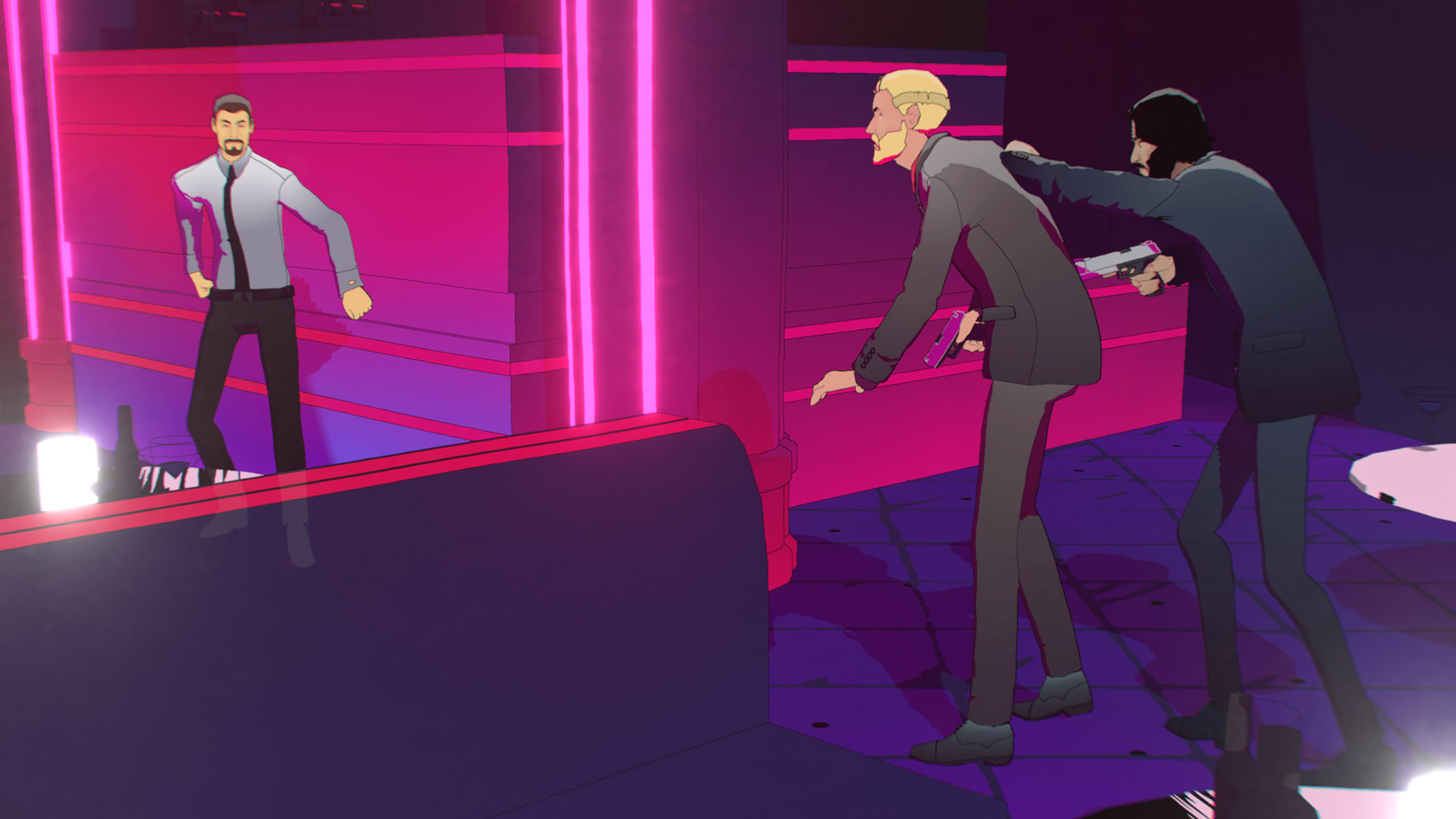 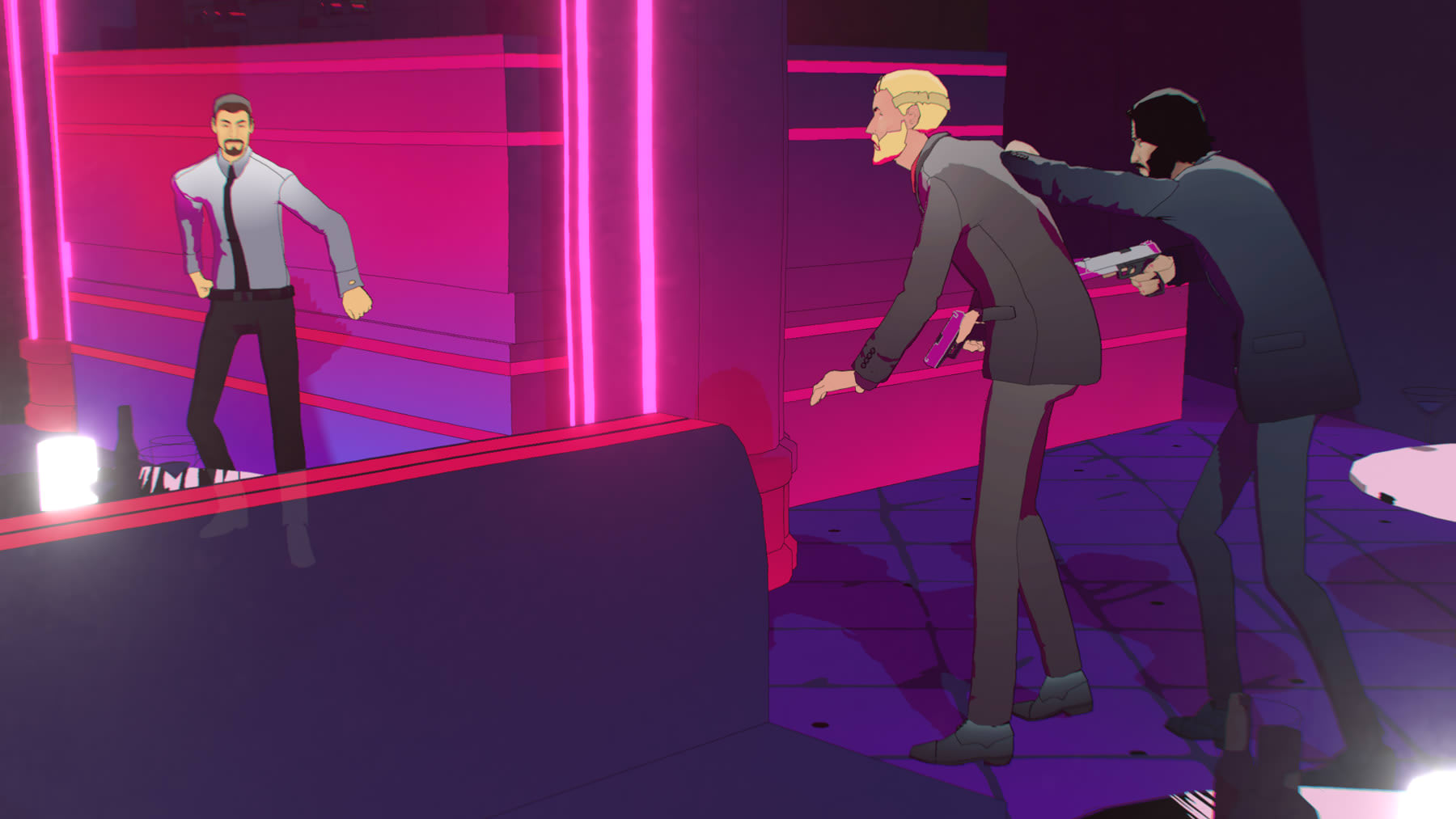 "John, is a man of focus. Commitment. Sheer will."

In the movies, John Wick is portrayed as a force or nature. A terrifying assassin with unrivalled stamina and frightening proficiency with every known firearm. He has brains to match the brawn, too: his vast experience working for the fictional Tarasov family has turned him into a brilliant tactician that's aware of every sight line and incoming threat.

Watching the bombastic set pieces, I often found myself wondering: how does Wick avoid being mobbed by 10 people at once? He can't dodge 10 bullets simultaneously, surely?

That question is answered by John Wick Hex, the latest game from Thomas Was Alone, Volume and Subsurface Circular developer Bithell Games. The top-down strategy title turns the films into a hyper-violent fusion of chess and Dungeons & Dungeons. Every level is filled with nodes -- denoted by white dots -- enemies and environmental cover. Your mission is to reach the end point and dispatch any lurking mini boss without being turned into a bullet-riddled pinata.

Survival comes down to time management. Every command you give Wick -- whether that's crouching behind a desk or firing a revolver -- takes a second or so to complete. At the same time, your enemies are moving and preparing attacks of their own. The complexity, therefore, is deciding when and how to act in every moment. Should I apply some bandages now? Roll behind that pillar, snatch the submachine gun, kill that incoming henchman and hope it creates a larger window of opportunity to heal up? Or keep pushing forward and hope I can reach the endpoint without taking any further damage?

A timeline at the top of the screen helps you weigh up these options. Every nearby character, including Wick, has a row that shows their previous actions and what, if anything, they've decided to do next. Nonlethal movements and attack preparations are shown in grey, while 'executions' -- the point at which someone deals damage -- are highlighted in purple. At a glance, the UI resembles a video-editing app like Final Cut Pro or Adobe Premiere. It's large and easy to parse, giving you all the information you need at a glance.

Survival comes down to time management.

The game will automatically pause if Wick completes an action, has an action interrupted, or spots a new enemy in the level. The frequent stoppages mean you can weigh up different actions and whether you'll beat your opponents to the metaphorical and sometimes literal punch. If a henchman is about to 'strike,' for instance, you might not have enough time to do the same. A 'parry', however, is quicker to perform and instantly stuns the enemy, cancelling out their strike and leaving them open for a counterattack.

Similarly, a henchman might be aiming at you with an old revolver. It's awfully slow to fire, so if you're holding a machine gun you'll see on the timeline that Wick is likely to strike first.

I say 'likely' because some actions have a probability attached to them. If the enemy is far away, or behind partial cover, a normally guaranteed shot might drop to 40 or 20 percent. These odds aren't a new idea -- countless real-time strategy games, including Fire Emblem: Three Houses and Mario + Rabbids: Kingdom Battle, have an equivalent accuracy system. You can crouch to improve Wick's aim and counter any lackluster odds. Changing stance takes time, though, and crouching stops Wick from performing melee attacks. If you're trying to tackle a large group of enemies, it's a risky manoeuvre.

Success involves playing the odds. If you're holding a machine pistol with a full clip, it might make sense to shoot an onrushing martial artist -- even if the probability of hitting them is only 20 percent. The weapon has a high rate of fire, so there's a good chance at least one bullet will connect before he reaches Wick. On the flip-side, if you're facing a group with limited ammunition, a wayward shot could be the difference between an impressive escape and embarrassing death.

Another tactical consideration is sight lines. You can effectively cancel an opponent's shot by ducking around a corner of crouching behind cover. Your enemies, of course, can do the same and will regularly retreat into a shadowy part of the map -- somewhere Wick can't see based on his current position -- and regroup.

Breaking sight lines is particularly important when multiple people are preparing to shoot you. Even if you're quick on the draw, you can only dispatch one opponent at a time and will likely take a hit from someone else. In the latter stages of the game, it's often better to flee and find somewhere that you can take them on individually. Unfortunately, the cover and sight lines system is a tad buggy. During my playthrough, there were a few instances where a soldier hit Wick through a tree or granite pillar. These shots never triggered a 'game over' but were frustrating given how carefully I had planned Wick's movements in and out of cover. 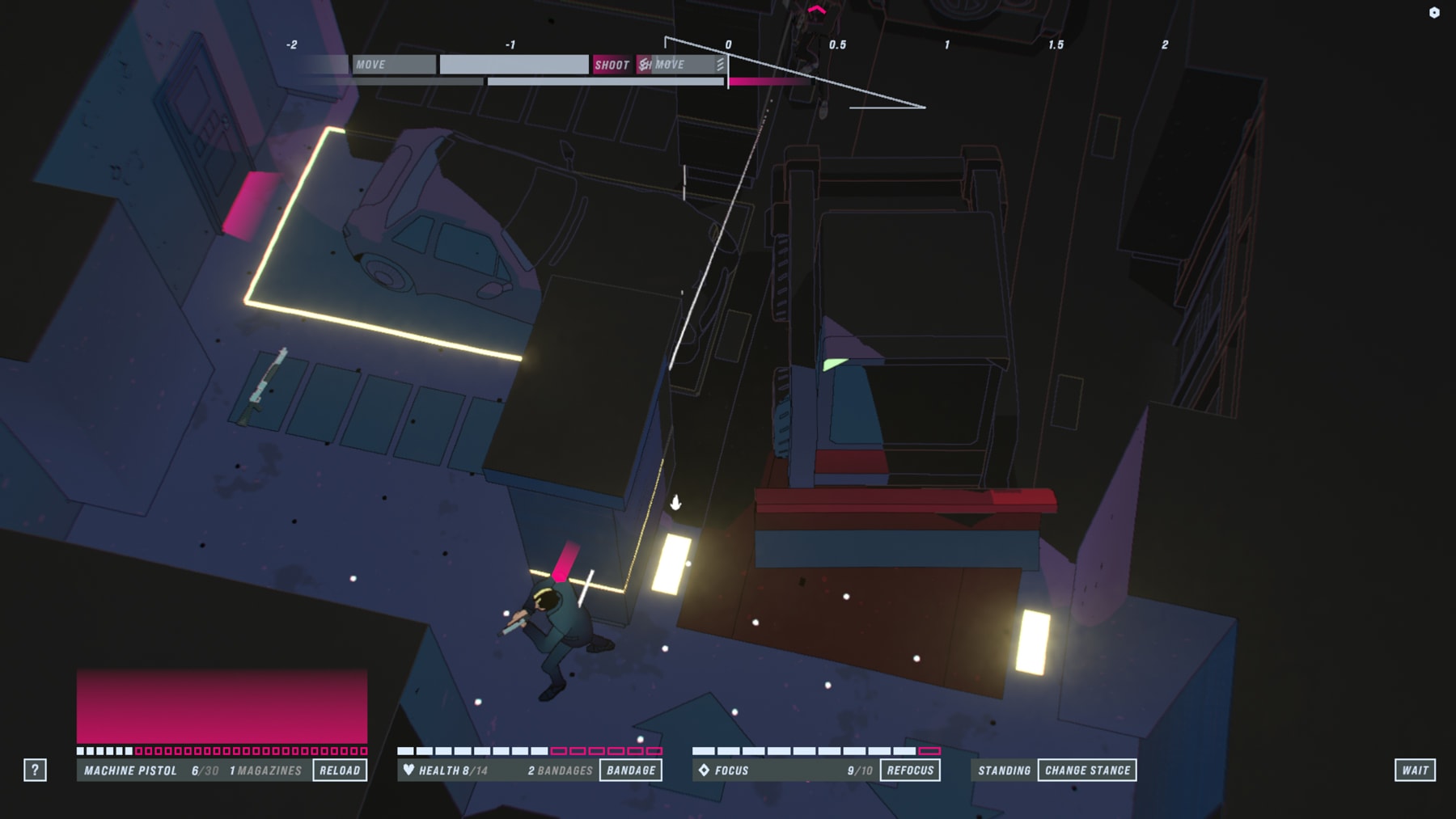 How did this bullet reach Wick?!

To make the experience even tougher, some moves -- such as last-minute dodges and evasive rolls -- require focus points. These points can only be replenished if Wick takes a moment to 'refocus.' If you're not careful, it's easy to dive headlong into a group fight and realize halfway through that you don't have enough points to escape.

There's a lot to consider, but the game never rushes you to make a decision. You can play fast and instinctively -- often with dire consequences -- or spend 10 minutes deliberating each move. (If you want a challenge, there's a higher difficulty setting called Expedited that limits each pause to five seconds.) Either way, Hex plays out like a high-octane ballet. You eventually find a tick-tock rhythm that alternates smoothly between tense deliberation and exhilarating action. I haven't felt this 'in the zone' since I played the original Hotline Miami on my Vita.

I haven't felt this 'in the zone' since I played the original Hotline Miami.

The short campaign is broken down into seven locations, each of which contain a handful of stages. Before starting a new locale, you're given the option to spend some coins -- just like the ones featured in the movies -- on some useful upgrades, such as increased roll distance and a higher probability when shooting from distance. Alternatively, you can use the currency to stash bandages and high-powered weapons in specific levels. You can't see the stages in advance, so it's a slight gamble, but the menu offers a small summary or hint for each of them, such as "Exhibit: The gallery is closed. All that remain are Yoshiko's personal guard."

The locations include a bank, industrial harbour, art gallery and snow-covered mountain base. While a tad generic, these places are well presented in the game's comic book art style. They also provide some interesting geometry and environmental cover for Wick to weave through. One gallery stage, for instance, includes a large room filled with sight-restricting columns. Another, set on a harbour, starts with Wick on top of a large shipping container, which helps him approach and shoot guards on the ground. Some stages also end with an elevator. Once called, a final wave of guards will swarm in and force you to play defence until the doors open.

The game has a simple but vibrant comic book-inspired art style.

At the end of every stage, the game will offer a pause-free replay of your run. In theory, I love this idea -- it's like your own custom John Wick movie! The cinematic camera angles are poor, though, and the editing is too fast and messy. After three or four underwhelming watch-backs I never bothered with the feature again.

John Wick Hex is technically a prequel to the live-action movies. The titular Hex, voiced by game industry veteran Troy Baker (The Last of Us, Uncharted 4: A Thief's End, BioShock Infinite, Batman: The Telltale Series) has captured Winston and Charon, the Continental hotel stewards that feature so prominently in the Hollywood films. They spend most of the game recounting Wick's murder-filled movements and unpacking why Hex is so furious with the assassin, Winston and Charon, and the shady 'high table' organization they work for.

John Wick obsessives will appreciate the extended timeline. The comic book-inspired cutscenes offer few interesting tidbits, though, that expand or change the lore established in the movies. The actual story is also predictable and underwhelming. (You never see a dog or Ford Mustang, either, which is sacrilege for the John Wick series.) Thankfully, the moment-to-moment gameplay more than makes up for these shortcomings.

I took roughly eight hours to finish the campaign, but depending on your playstyle it could take anywhere between six and 12. At the end of every location, you're also given a fancy name -- the game's equivalent of a rank -- if you complete certain criteria, such as beating a specific time, using zero bandages or keeping your shot accuracy high. It's a small, but welcome replayability feature for people who want to be tested or eke some extra value out of the game.

At $19.99, Hex is a short but worthwhile that effectively captures what it would be like to fight and, more importantly, think like John Wick. You have more time than the unstoppable assassin to make each decision, of course. But you're ultimately coming to the same conclusions and fighting with near-identical speed and lethality. I wish the game was wrapped up in a slightly more ambitious, memorable story. Regardless, Hex is an indie-sized triumph that proves you don't need a 'triple-A' budget to make compelling licensed games.

Each location starts with a planning phase.
The timeline indicates whether your shots will land first.
Every enemy has a dedicated row in the timeline.
You can check an action's probability before committing to it.
Source: John Wick Hex (Epic Games Store)
In this article: art, bithell games, entertainment, gaming, independent games, indie games, indie gaming, john wick, john wick hex, strategy
All products recommended by Engadget are selected by our editorial team, independent of our parent company. Some of our stories include affiliate links. If you buy something through one of these links, we may earn an affiliate commission.