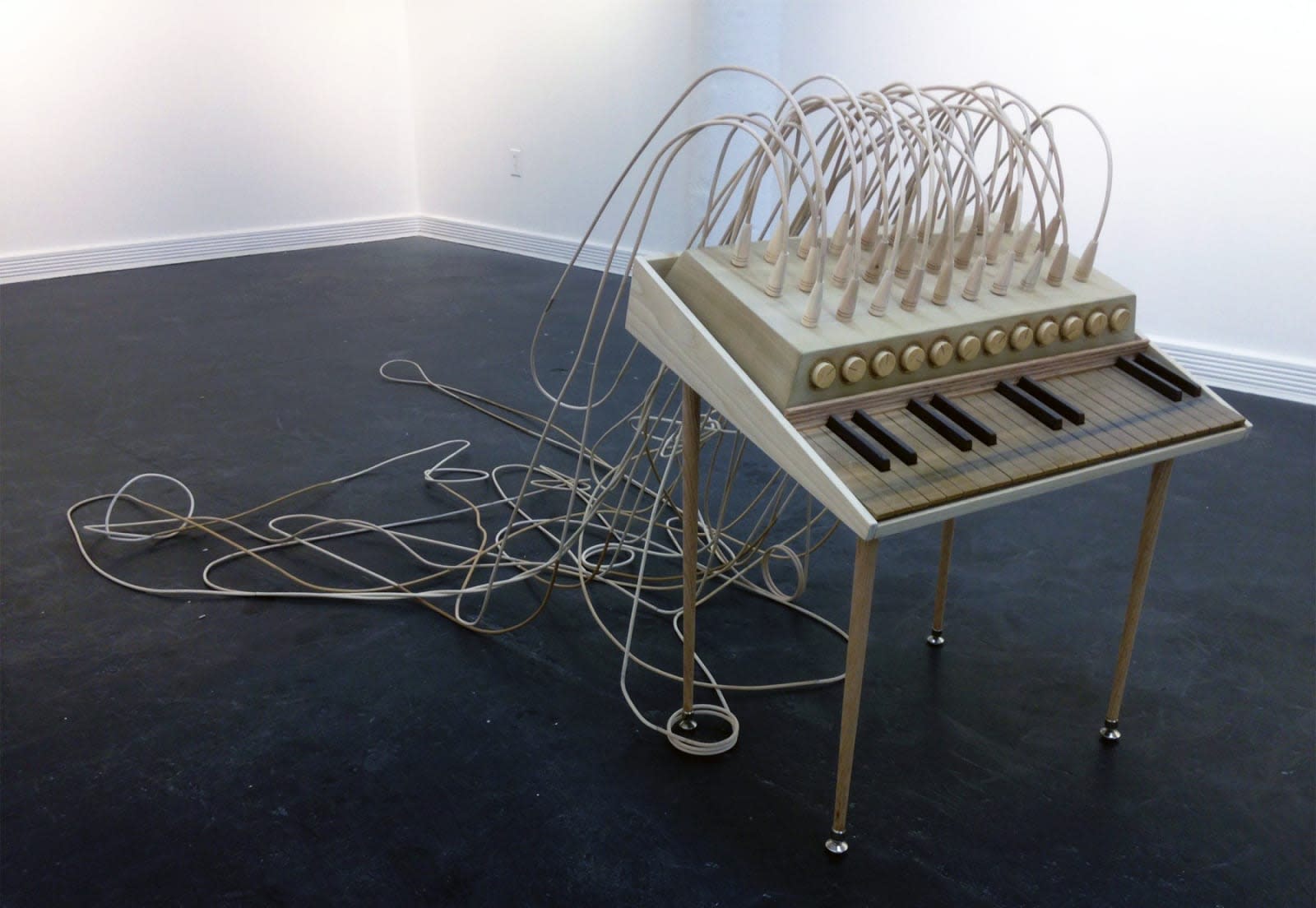 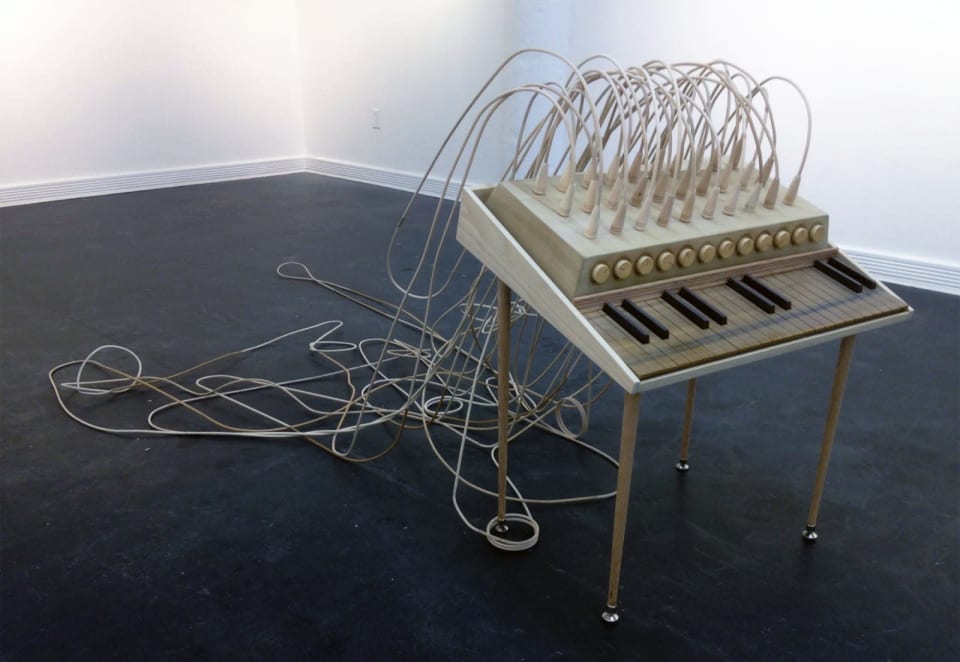 Recently, I spent the afternoon traipsing through the streets of Brooklyn for Gowanus' annual open art studios tour. It's a yearly ritual for me because the industrial neighborhood, which is full of warehouses turned CrossFit gyms, is a veritable playground for creative types. Every abandoned-looking building opens its doors to reveal dozens of artists' studios.

After glazing over hundreds of paintings and vases, I came across a room full of intricate musical instruments and machines, all painstakingly crafted of wood. And I don't mean acoustic guitars. No, here were guitar pedals, MPCs, pianos and more, all with knobs, cords and plugs that looked real enough to find at Main Drag Music. 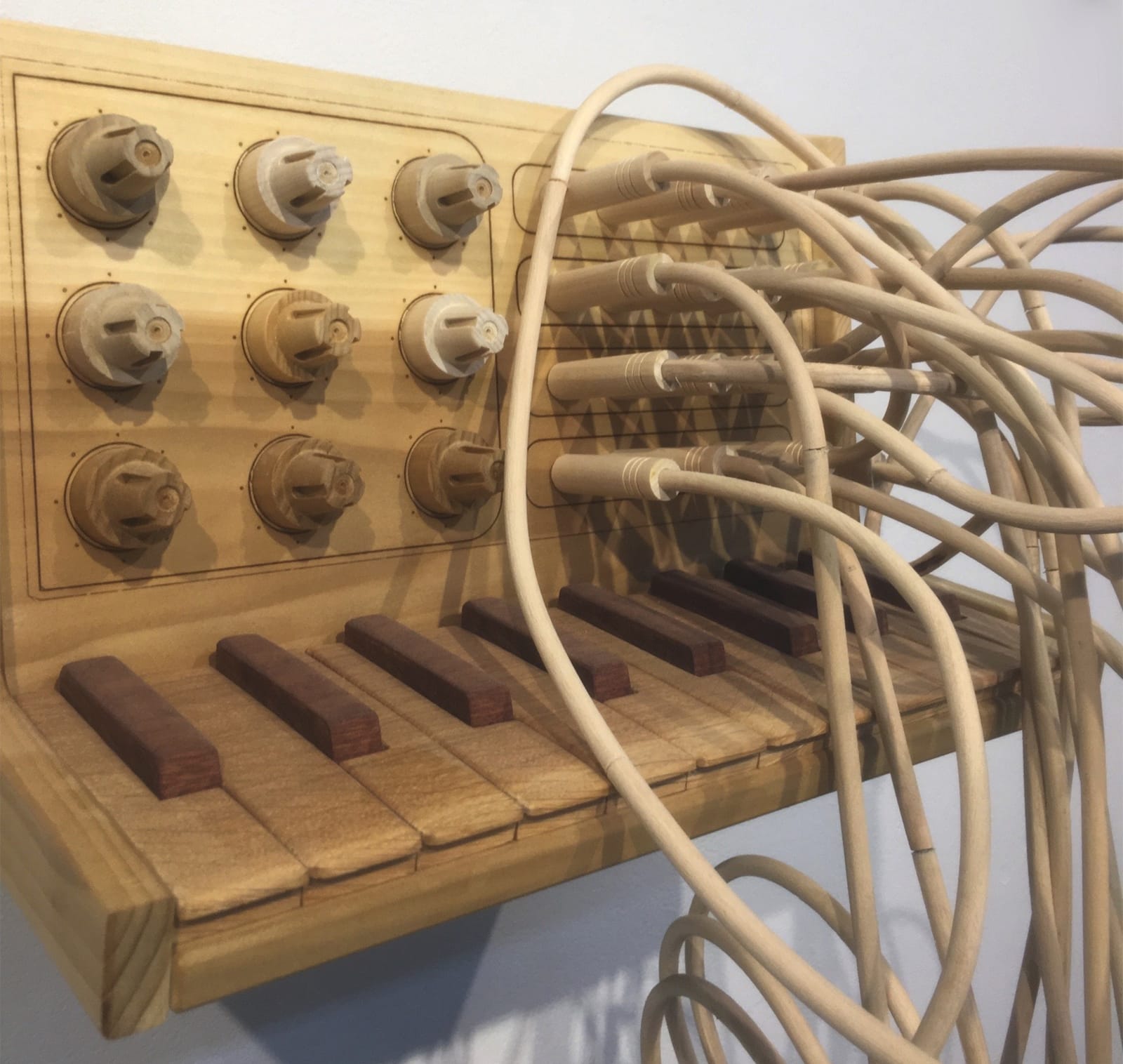 The cords in particular looked like I could easily bend them with my bare hands or, more likely, with my feet as I tripped over them. I imagined some poor sucker spending thousands of hours whittling each one with a knife while listening to Four Tet on high. The machines didn't actually work, but the rigorous detail made each of them mesmerizing.

Artist Craig Kaths said he's been using power tools since he was 10 years old as well as playing guitar and DJing for almost as long. "The main drive that makes me make work is definitely music and sound," the blonde, boyish thirty-something explained. "But they're definitely not just that." To him the sculptures reference not only musical electronics but also the labor involved in creating art. "My work is about the physicality of work," he said, adding that "it's an easy way to connect to people -- to be able to show [you put] time and effort into something."

Take Chuck Close drawings, for example, Kaths said. From far away, each looks something like a photograph -- i.e., one piece of art. But if you look closer (pun intended), each tiny panel is its own painting, which even the least artistic among us knows takes a long time to make. 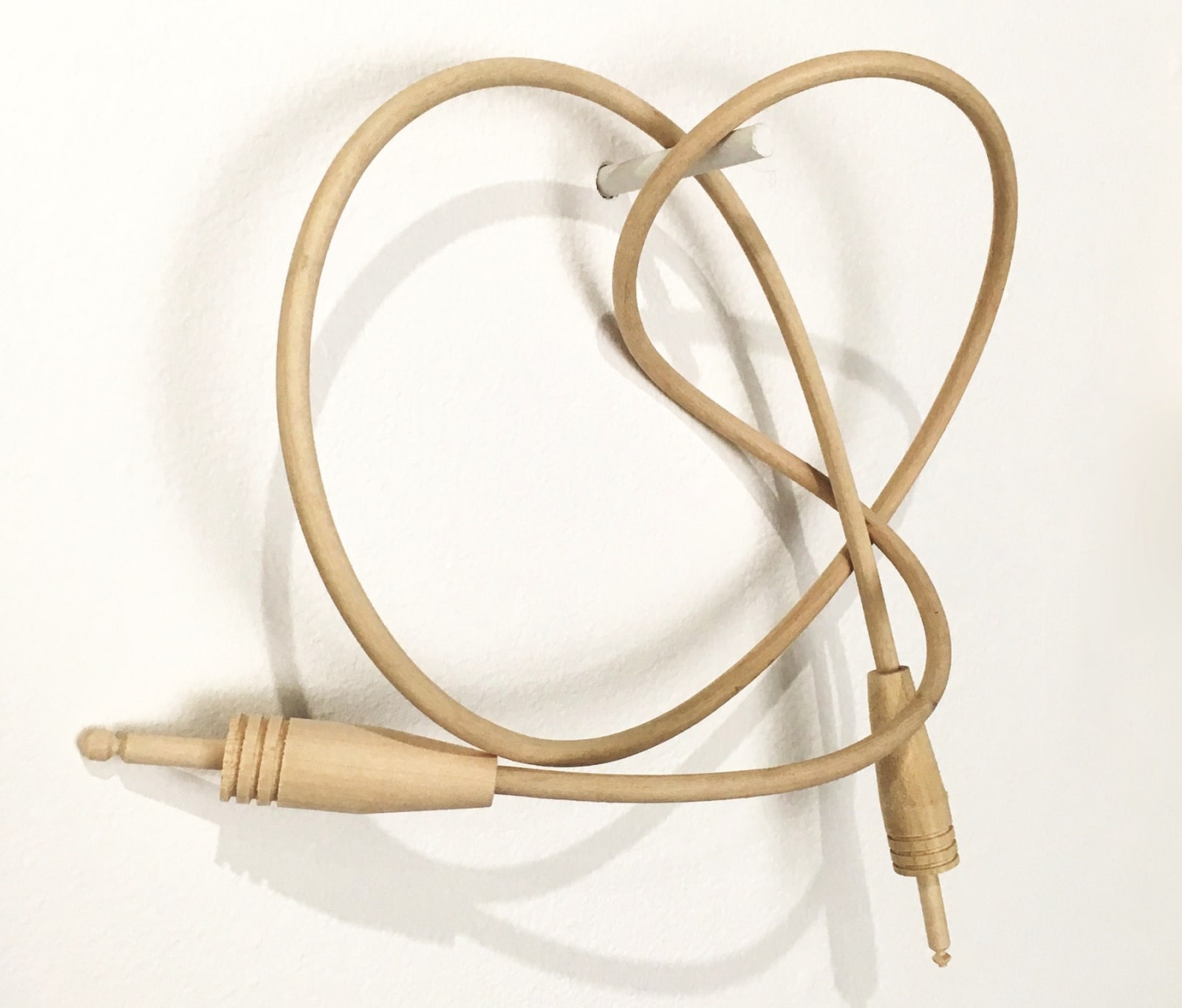 Kaths is no stranger to strenuous processes: Though he started out as a painter, he's worked at art fabrication shops for almost a decade. That includes a stint with Takashi Murakami, where he assisted the famous artist in screenprinting the base layers of his superflats and then carefully painting over each section. "It doesn't sound like much," Kaths said. "But this is super labor intensive: A four-inch-by-four-inch canvas would take about 10 days to prep before it was ready to be painted on."

In 2015, while managing projects at an art gallery in New York (i.e., mainly working at a computer all day), he started itching to do something with his hands again. That was right around the time famed artist Roxy Paine premiered Carcass, his fast-food restaurant made entirely of birch wood, including all the fryers, computers and everything else you'd find in a McDonalds or Burger King. Then there's Paine's Checkpoint piece: a life-size, wooden diorama of a TSA checkpoint.

Inspired by Paine's installations, Kaths decided to try woodworking himself, combining it with music for a unique take. The first one was a wooden version of a guitar pedal connected to cords, which looked like they were coming straight from the wall. From there, Kaths let his imagination take over, creating fantastical machines only loosely based on real-life models. "The pieces I make reference real things," he explained, like pianos and keyboards, but with a twist. For example, one keyboard looks like a Fender Rhodes or Wurlitzer -- until you notice a few important details, namely that the sharp and flat keys aren't in the right places. Kaths said he wants musicians, carpenters and other experts as well as laypeople to notice the differences.

So what kind of machines does one use to make wooden machines?

Kaths said he originally tried to chisel the wood to look like plugs and other electronics, then realized his work about work didn't need to be that laborious. Now he's hacked together a less painful process. He creates the plugs, knobs and other detail work using a router on a micro lathe he built after watching a YouTube video. He uses an XY plotter from Makeblock fitted with a laser engraver to design and burn knob-level markings, design indicator marks and other patterns on to his sculptures to make them look more like real-life music equipment and other types of machines. Kaths also experiments with the XY plotter as more of an instrument of artistic expression, using the laser to create "paintings" by strategically burning paper and gesso (a white paint mixture designed to prep a surface). 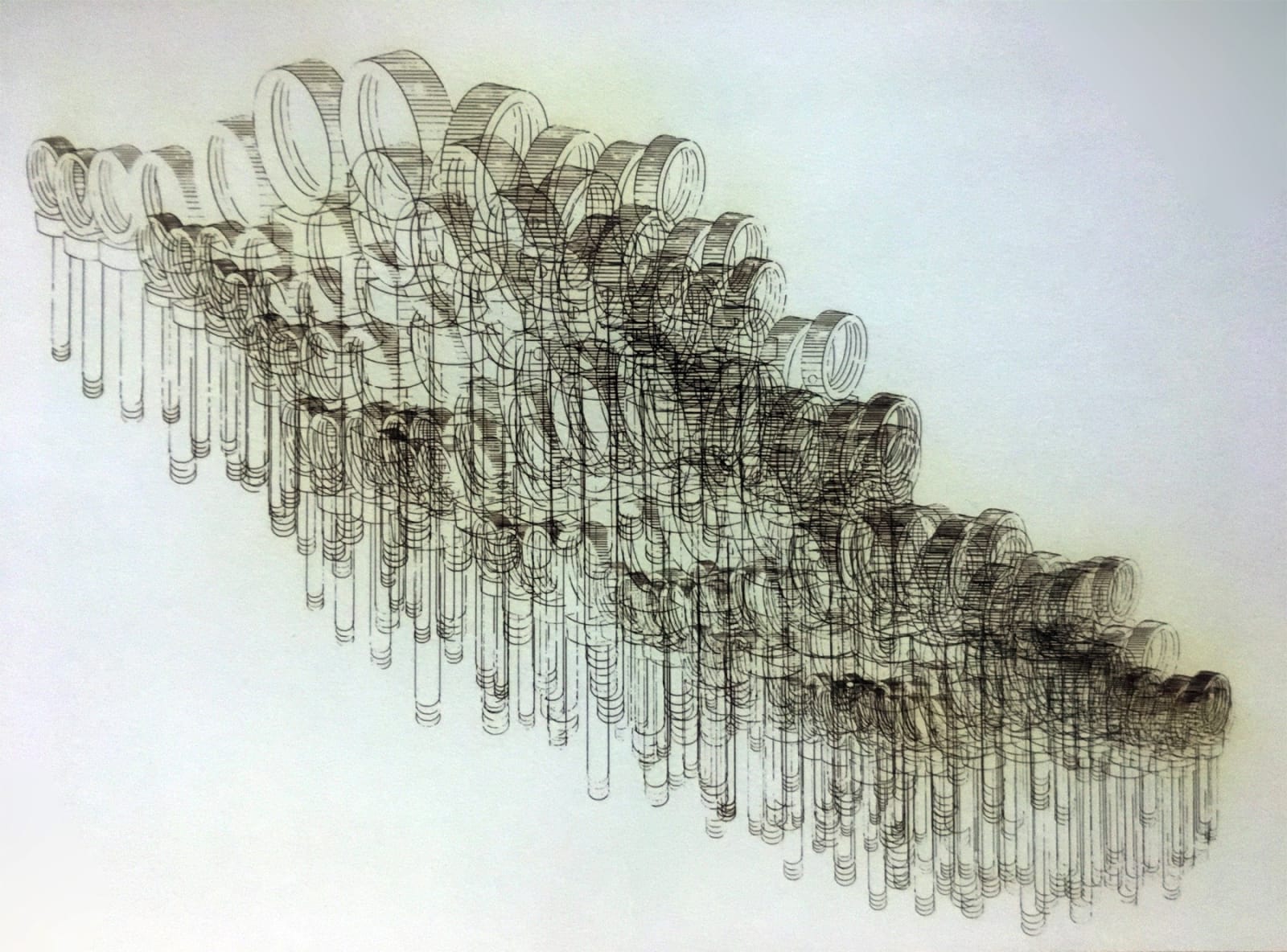 Makeblock sells the plotter as if it were a children's toy, but he had to put it together himself and learn G-code to use it. "You can put a pencil, a pen, anything, and the thing will hold it like a paintbrush," he said. Meanwhile, to create the cords for his wooden sculptures, he soaks about 100 wooden dowels at a time in water for two weeks, then steaming them for a couple hours until they're "like a spaghetti noodle." Finally, he bends and shapes them until they look convincingly like the cords tangled behind my TV, though with less dust and dog fur. (He said this method has a 70 percent success rate.)

A decade ago, Kaths would have been able to bend the dowels and use the lathe easily, but laser cutting? Forget about it. The technology has only been around since the 1960s, and Kaths would have had to seek out an expert to use an expensive laser-cutting machine. "Over the past 20 years or so, the technology has significantly become more affordable as patents have expired," said Scott Van Campen, the executive director of Makerspace NYC. He estimates that the tools cost as little as one-fourth of their former price. That's "allowed people to literally have high-tech machines on their kitchen tables. Three-dimensional printers, laser cutters, plotters and CNC routers all basically use the same technology to control the movements of the 'tool' of choice."

Using these machines, Kaths estimated that one wooden artwork takes approximately one month to make (he has always worked a day job, but nights and weekends are devoted to his art practice).

Now, after spending the past few years perfecting the practical side of working with wood and exploring the ideas of process and creation in his work, he's expanding to other themes. Kaths' latest sculptures looks less like something you'd buy at Guitar Center and more like an installation at a cool gallery in Chelsea.

Take his piece Everything Is Purple, which showed at Tempus Project in Florida in winter 2018. It consists of 50 connected wooden cords twisting and turning from an attachment on one wall across the floor to an attachment on the opposite wall. Kaths being Kaths, Everything Is Purple alludes to the hip-hop song. But he said the "mess" of the cords refers to "how much of a mess we are all in due to our current political climate." It also refers to "how we can all come together as one," in that if you combine blue and red, you get purple. "We're all connected," he said.

In this article: art, craig kaths, design, entertainment, gear, mpc, music, musical instruments, profile, sculpture, wood, woodworking
All products recommended by Engadget are selected by our editorial team, independent of our parent company. Some of our stories include affiliate links. If you buy something through one of these links, we may earn an affiliate commission.