Backers say that they're safer, cheaper and faster to build.
D. Cooper|03.05.20
@danielwcooper

In the US, the electricity powering your home was probably generated by burning natural gas, a fossil fuel. As coal becomes unfeasible, renewables work toward scale and nuclear is benched, gas remains the go-to for power companies. Industry analysts talk about gas as the "bridge," the fuel we can burn now to buy us time to develop our carbon-free future.

Gas plants are cheap to build and run, have a smaller emissions footprint than coal and many see them as a safe bet, both economically and safety-wise. But General Electric Hitachi Nuclear Energy has started the ball rolling on an alternative that would cost the same as a gas plant, at around $2,000/kW, but not use gas. Instead, it would use a small nuclear reactor that, the company claims, is safe, cheap and, crucially, quick to build.

As we explained last year, nuclear power isn't without its problems -- or critics -- but it does offer large volumes of base-load power with no carbon emissions. And time is running out for us to dramatically cut carbon emissions or face environmental disaster. That means, after decades of hostility, some lawmakers are coming around to the idea of a revival.

GEH's solution is the BWRX-300, a Small Modular Reactor (SMR) the company says has all of the benefits of nuclear with fewer downsides. By making it cost-competitive as a gas plant, GEH hopes that power companies will compare the two and pick its offering. After all, natural gas still releases carbon into the atmosphere, and there's a desperate need to reduce emissions. Even after the US withdrew from the Paris Agreement, the rest of the world still has an eye on its targets.

The BWRX-300 isn't a new reactor, as such, more a shrunken-down version of GEH's existing Economic Simplified Boiling Water Reactor (ESBWR). It has the same safety features as its bigger sibling, including the ability to passively cool itself for up to seven days without power, so the sort of coolant-loss incidents that affected Fukushima shouldn't happen here.

Rather than occupying a space measured in square miles, an SMR could sit on an area of less than two acres. Christer Dahlgren, principal engineer on the project, said that the reactor itself could sit on the grass field of a soccer pitch. But the "Small" in its name doesn't relate to its footprint, but how much power it generates.

To be "small," an SMR's output must be less than 300 MW, which is actually a benefit here. After all, most nuclear power plants have to get bigger to justify their ballooning budgets, especially in the West. Not to mention power-hungry industrial businesses could theoretically build their own reactor where needed.

Because SMRs are modular, their components could be prefabricated at a factory and shipped to the site for assembly. Not only would that speed up construction but make it possible to mass-produce components for better economies of scale. And by building each reactor in sequence, each module would make up a component for a bigger power station.

Dahlgren said that two things cause typical reactor costs to spiral, the first is concrete, which takes a long time to cure. Pouring a concrete pad for a single-car garage takes around 28 days to cure in ideal weather. Most nuclear plants require orders of magnitude more, so construction workers hang around while nature to take its course.

Jon Ball, GEH's EVP of Nuclear Products said it was this problem that sent GEH back to the drawing board. "The number one driver in projects going over budget and over schedule is concrete, and issues with concrete." So the BWRX-300's design uses only a fraction of the concrete and steel to avoid these issues. 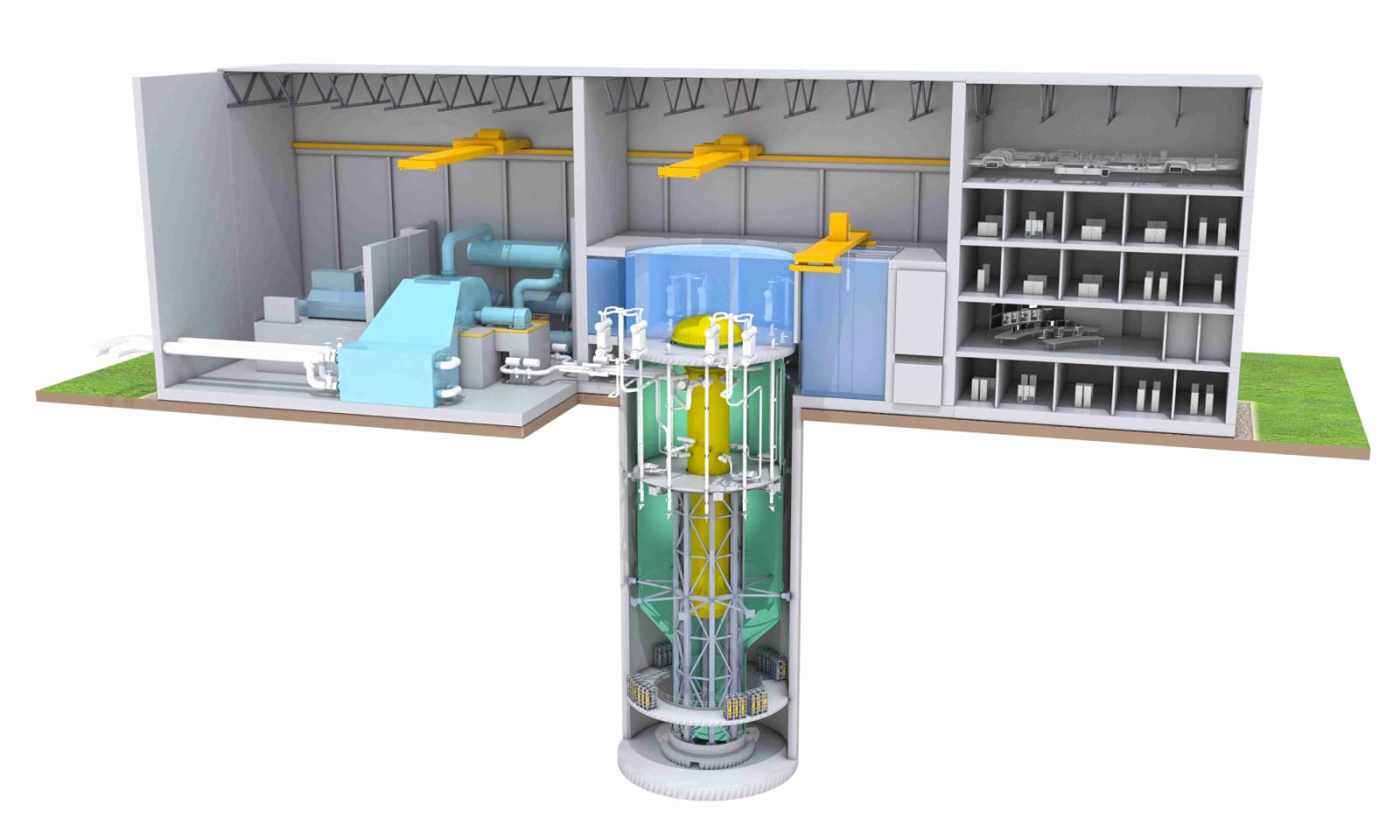 Concrete's slow curing time often affects the other issue around financing projects like this: interest. For every day the hardware isn't working, the project incurs fees that you'll eventually have to return to your backers. The longer it takes to build a reactor, the longer you'll be paying back the people writing the checks.

In the UK, the Heysham 2 station took nine years to build, while construction of Hinkley Point C started in late 2017 and is expected to finish in 2025. Even the most efficient of nuclear builds can take up to four years to complete, like Reactor 7 at the Kashiwazaki-Kariwa plant. Dahlgren says that GEH expects its first SMR to take just 30 months, or 2.5 years to build.

Dahlgren pointed to the benefits of this short construction time: You could have a larger plant built in sections. "You can complete that [first] plant," he explained, "and it starts paying for itself," while you build the second, third and so on.

Concrete containment chambers are crucial in nuclear reactors -- the reason Chernobyl was such a disaster was that it didn't have one. Those in SMRs are different from other reactors, since GEH is using a metal containment cylinder surrounded by (less) concrete. Another change is that the reactors themselves will be sunk into pill-shaped shafts up to 100 feet deep in the ground. It's thought that this will help reduce the volume of concrete used, and ensuring greater protection from any "external events," while maintaining the same level of safety.

There's one more benefit that Ball says could be crucial to think about in our future -- the number of coal plants due to close by 2050. "This plant was sized at 300 MW because it fits in very well," he said, suggesting that SMRs could be built next to dead coal plants. That would enable the new plants to take advantage of the existing power lines and local infrastructure.

These claims are, for now, just that, so take them with a pinch of salt. Until regulators give their blessing, this is simply an idea, albeit one with enormous backing by a major US corporation. GEH's Ball says that the path to regulatory glory will be easy because the BWRX-300 is simply a shrunk-down version of its existing reactor. If officials agree, the first plant in the US could be operational as early as 2027.

GEH is also working with a number of companies across the world to explore the potential of SMRs. They include a Czech-owned power company, Ĉez, and Synthos, a Polish manufacturer of synthetic chemicals. The former is to bolster its energy generation for grid use, and the latter is interested in powering its operations with its own plant.

For all of the SMR's innovations, it still has the same fundamental issues as other nuclear reactors. There's the risk of an accident, albeit a small one, and how it deals with waste products. Nuclear waste is highly radioactive, toxic to humans and dangerous in the wrong hands, and there are still questions about safe, long-term storage.

Anti-nuclear campaigners believe the risks from nuclear are too great to justify any further investment. Their argument is that renewable energy from solar, wind and others, coupled with improvements in energy efficiency, will provide more than we need. But that doesn't necessarily factor in the world's ever-increasing hunger for power, especially for all the new electrified products.

GEH isn't the only company working on an SMR: The Portland-based NuScale is further along in the regulatory process. At the end of last year, it announced it had reached the fourth stage of the Nuclear Regulatory Commission's extensive certification process. If successful, it could have approval as early as the end of this year, with construction starting not long afterward.

We won't know how successful SMRs can be until we start to see these systems actually built. That could be a few years away, but if the technology's backers can demonstrate it can hit its cost and construction targets, things could change, dramatically.