Samsung's 4K and 8K TV launch is one of the more controversial in years, because Samsung appears to be saving high-end features for the much more costly 8K models. We first saw signs of it in January at CES 2020, when Samsung failed to show off any mainstream 4K sets, while displaying a plethora of 8K models. The company has now effectively confirmed that situation with the US launch of its new lineup.

The high-end QLED sets appear to be limited to the 8K range, while the 4K QLED TVs are along the lines of last year's Q80R step-up model. Feature-wise, only the 8K sets have HDMI 2.1, for instance. More significantly, it appears that the 4K sets have fewer dimming zones than before, with around 100 compared to 500 in 2019, according to a FlatpanelsHD analysis. (A Samsung spokesperson told Engadget that "unfortunately, we don't share number of zones in our TVs, as it's a subjective measurement to begin with.")

This year, Samsung is leading its lineup with 8K QLED TVs in the Q950TS range. That includes 65-, 75- and 85-inch models ranging in price up to $13,000 or so (Samsung has yet to fully reveal prices or release dates yet).

As the flagship sets, they run at 7,680 x 4,320 native resolution and pack full array local dimming (FALD) to maximize HDR picture quality. Samsung said that it has managed to increase peak brightness with this system by up to 20 percent over last year's models. The Q950TS series should also deliver better contrast, while retaining the controversial ultra-wide viewing angle tech from last year. Samsung also said the new models will deliver better clarity, color accuracy and HDR. Note that as usual, Samsung will support HDR10, HLG and HDR10+, but not Dolby Vision.

From a gaming standpoint, the sets offer support for both AMD's open-source FreeSync and NVIDIA G-Sync technology. They also come with a Game Multi-View option that lets you play a game while also watching a separate TV feed via a picture-in-picture window. Input lag, meanwhile, is down to around 10 milliseconds.

Visually, they sport nearly bezel-free designs and are a mere 15mm thick, so they'll look like frameless paintings on your wall. To keep unseemly wiring to a minimum, they also come with Samsung's OneConnect box that can be located out of sight below the TV. As mentioned, the lineup will also support HDMI 2.1 with up to 8K at 60Hz and 4K at 120Hz.

The big problem with 8K TVs is the lack of 8K content. To that end, the Q950TS lineup comes with a neural-network upscaling engine powered by the Quantum Processor 2.0 8K. Upscaling is no substitute for native content, however, and that doesn't look to be coming any time soon. In fact, there's still a serious dearth of 4K programming in the US and Europe.

Audio-wise, the Q950TS sets will feature a 4.2.2 speaker array with Object Tracking Sound (OTS) making voices and sound effects appear to come from the appropriate region of the screen. If you install one of Samsung's 2020 Q-series soundbars, they'll work in concert with the TV speakers to deliver a large soundstage while maintaining the object tracking features. 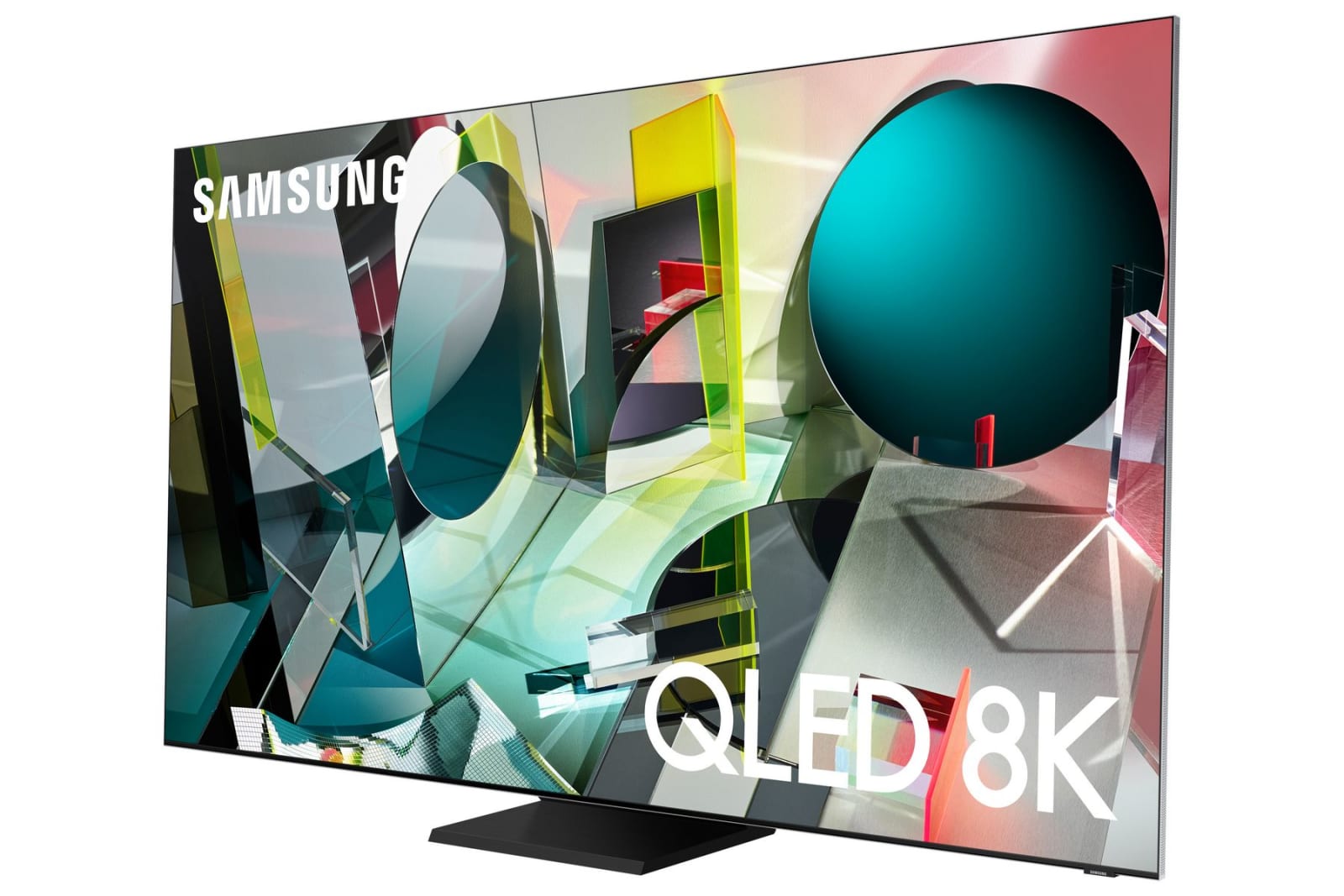 Still in 8K, Samsung will also release the Q900TS series in the US, again in 65-, 75- and 85-inch models (above). That lineup is nearly identical to the Q950TS series, feature-wise, but doesn't have the bezel-less "Infinity Screen" and ships without the OneConnect box.

The Q800T series, meanwhile, also lacks the Infinity Screen display, has FALD but fewer local dimming zones, lower brightness (2,000 compared to 3,000 nits) and a cable management system rather than the OneConnect box. It'll come in 65-, 75- and 82-inch sizes.

That brings us to the 4K lineup, starting with the top-end Q90T QLED model, available in 55-, 65-, 75- and 85-inch sizes. It does offer full array local dimming, but as mentioned, reportedly has fewer local dimming zones. It also packs HDMI 2.0, rather than HDMI 2.1 inputs. 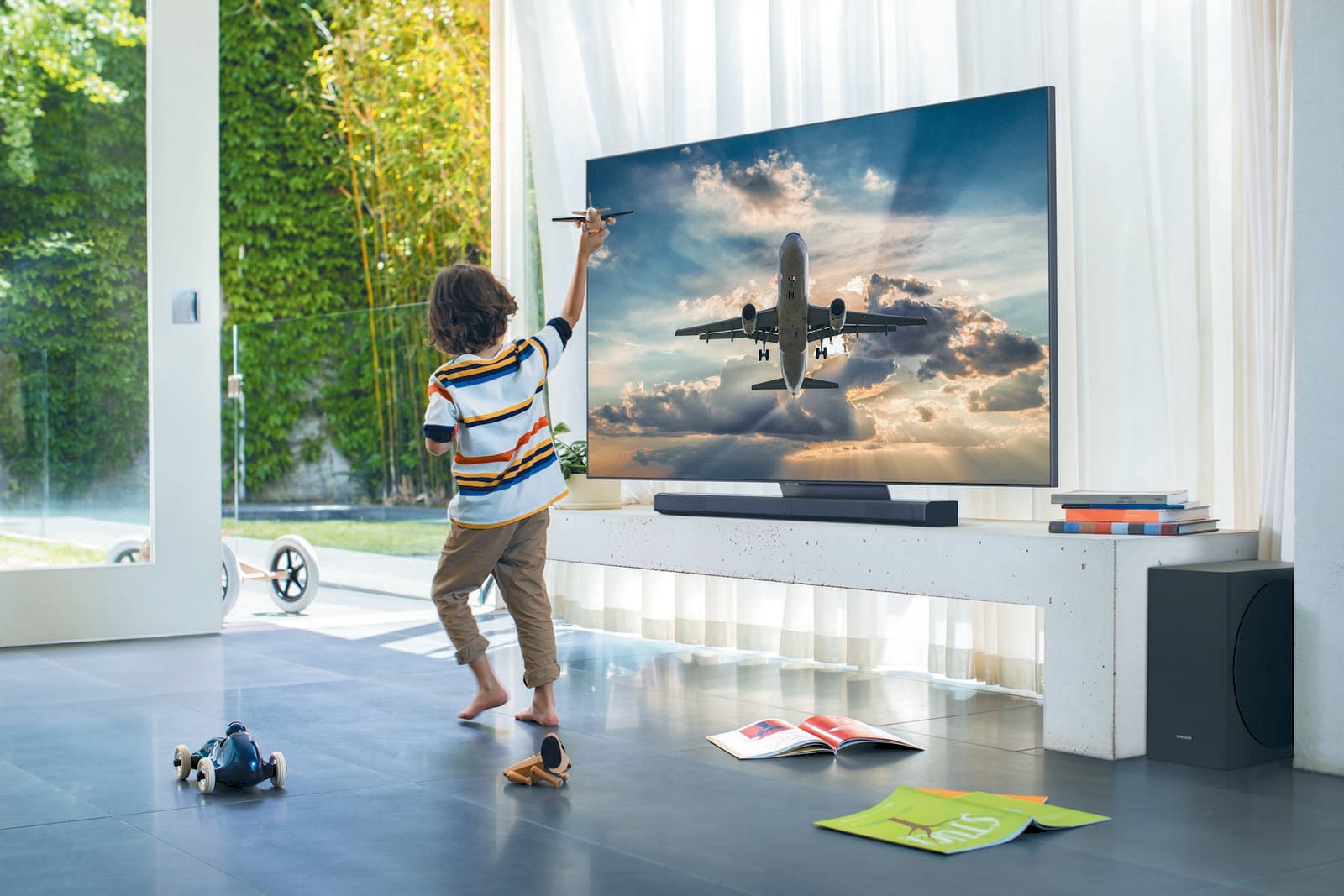 Like the 8K models, the Q90T (above) harnesses new AI upscaling powered by deep learning, which is key on a 4K set considering that most US content is still 1080p. It also has improved local dimming efficiency for brighter highlights and ultra-wide viewing angles, along with support for HDR10+. None of the 4K displays have the bezel-free Infinity Screen, but the bezels are certainly pretty tiny. You also get HDR10+ support along with the Object Tracking Sound and Q-Symphony available on the 8K sets.

The Q80T is Samsung's cheapest QLED set with full-array local dimming, but is slightly dimmer than the Q90T with 1,500 nits of peak brightness. Otherwise, the feature set is the same, and it also comes in a 49-inch model, along with 55-, 65-, 75- and 85-inch versions.

The cheapest models will be the Q60T and Q70T sets ranging in size from 43- to 85-inches. Those lack full-array local dimming, but use something Samsung calls Dual LED edge-lighting. That system can adjust the backlight color temperature between cool and warm to best suit the image, yielding better contrast and improved viewing angles. You also get a significant drop in brightness from 1,500 nits on the Q80T to 500 nits on the Q70. These sets also lack the OTS audio feature, and have thicker three-sided bezels.

All products recommended by Engadget are selected by our editorial team, independent of our parent company. Some of our stories include affiliate links. If you buy something through one of these links, we may earn an affiliate commission. All prices are correct at the time of publishing.
View All Comments
Samsung unveils its latest 4K and 8K QLED TVs for the US
4K
8K
av
gear
nikon
Q950TS
QLED
Quantum Dot
samsung
TVs