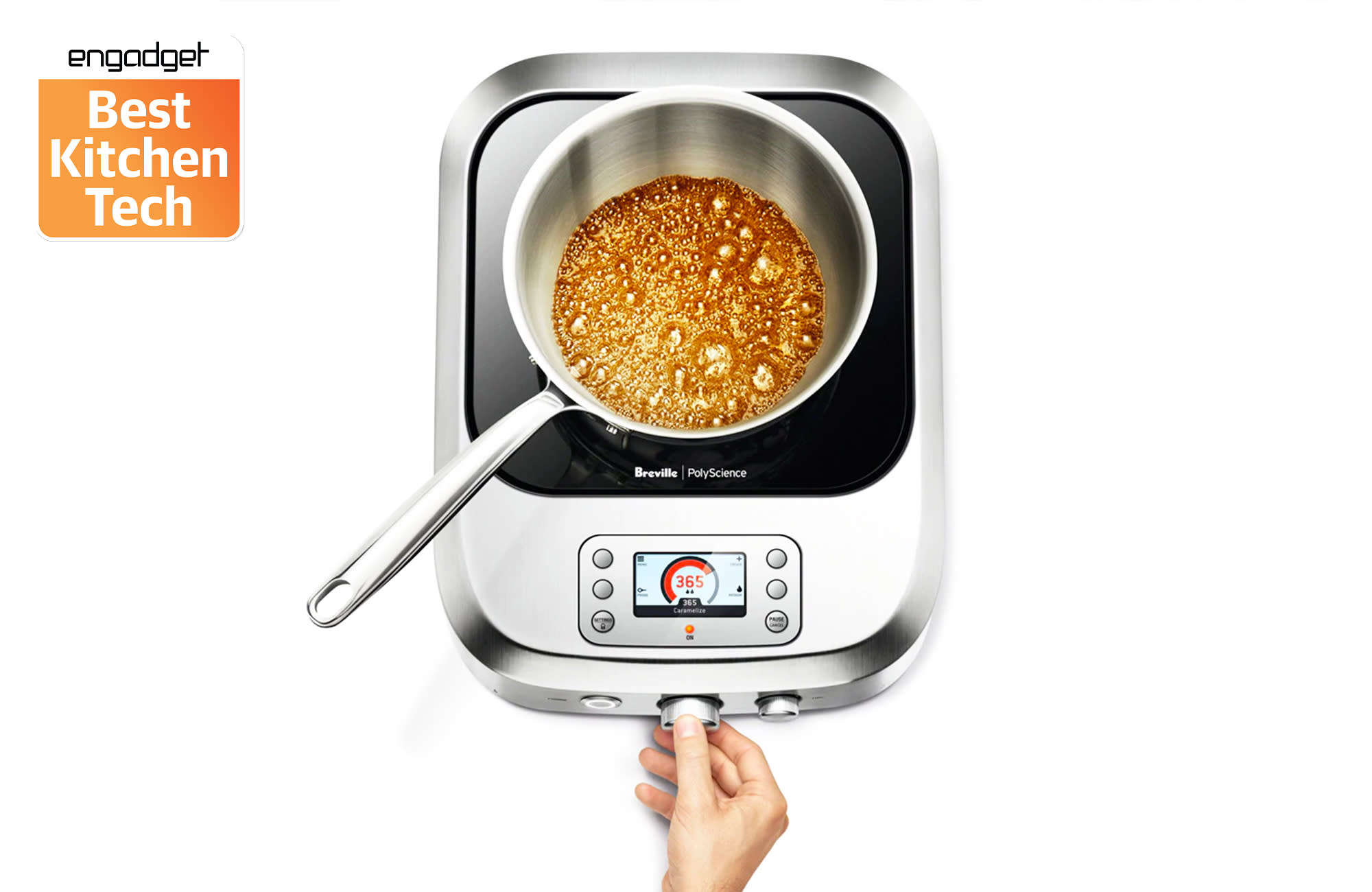 As part of Cooking Week, we set out to test some of the most niche (and, in some cases, ridiculous) kitchen gadgets we could find. We wanted to know if these impressive-looking appliances actually do what they claim and if they’re worth the splurge. These are our findings.

There’s no denying the appeal of an induction burner or cooktop. They have some key benefits – with the biggest two being speed and efficiency. Whether it’s a single burner or a full cooktop, they heat faster than regular stovetops and offer more precise temperature control. They also have the added perks of not giving off as much residual heat, which is nice during the summer, and the surrounding cooking surface doesn’t get hot to the touch, which lessens burn risks. You can find a standalone burner for under $100 while a full replacement for your stove can run you a few thousand.

In between we have Breville’s PolyScience Control Freak: A $1,500 induction device that reaches exact temps quickly and holds them there. It’s a powerful standalone burner from Breville’s PolyScience line. This group of devices includes sous vide immersion circulators, vacuum sealers, a smoke gun and a speedy wine decanter. Gadgets and appliances for professional cooks or the pinnacle of the culinary curious at-home chefs. It’s not exactly stuff casual cooks would need, or likely even want.

However, the Control Freak’s performance is exceptional. The burner has a temperature range of 86-482 degrees Fahrenheit (30-250 Celsius). This gives you the option of everything from low-heat slow cooking to high-temp searing. You can do anything you would ordinarily stand over a stove for – and then some. The advantage of the Control Freak is that it holds an exact temperature for as long as you need it to. There’s also a 72-hour timer and Continue, Keep Warm, Repeat and Stop Cooking functionality. Plus, a probe allows you to make sure whatever you’re cooking is held at a constant temperature rather than just relying on the burner’s settings.

Beyond the usual checks for even heating and speed to boil water, I decided to put the Control Freak through its paces with one of my springtime culinary traditions: strawberry jam. The tl;dr version of the process is you bring smashed fruit to a boil (with or without lemon juice and/or added pectin to help it set). When that happens, you add an absurd amount of sugar and bring it back to a rolling boil, leaving it there for one minute.

Per Breville’s guidance, I set the temperature to 219 degrees and the heat intensity to medium, which controls how quickly the unit reaches your desired temp (low, medium and high). With all that sweetness, you don’t want to burn a batch by heating it too fast. I also plugged in the probe to monitor liquid temp directly. It probably won’t shock you to discover a large pot of smashed fruit takes significantly longer to reach a boil than water, especially when a batch is 10 half-pint jars. On my regular flat-top stove, this typically takes around 20 minutes. The Control Freak had the mixture boiling in less than half that. It was also quicker at bringing the jam back to a boil once I added all the sugar, which can take five minutes or more.

Of course, boiling isn’t the only thing the Control Freak can do. Breville offers a web-based “app” (it’s a glorified mobile website) to guide beginners through the cooking process based on your desired technique or main ingredient. You can find temperature and heat intensity information, if you should use the probe and recommended cookware. This “app” doesn’t connect to the device, so it’s a reference rather than a controller. Still, it will help you do anything from sous vide to scrambled eggs. I tested the latter and the results were perfectly moist and soft, cooked low and slow the way God intended. There’s so much to explore here, and I didn’t come close to scratching the surface, but I was still impressed.

Besides the price, the other potential downside for some people is the size. At 13.7 x 18.5 inches, the Control Freak is a beast. Most of that extra area beyond the cooking surface houses the display and controls. It also weighs almost 25 pounds. So, when you’re not using it, it will need significant storage space. Breville does include a nice case with the unit, so you won’t have to worry about tucking a pricy stainless steel appliance with a ceramic glass top in a cabinet unprotected.

In the end, I was consistently impressed by the Control Freak’s speed and efficiency, as well as its ability to hold precise temps. And while I can certainly see why someone who needs to meet exact cooking parameters would get a lot of use out of it, the price puts it out of reach for many. Unless you’ve got some serious kitchen ambitions or deep pockets to fund your cooking gadget arsenal, a much more affordable induction burner will suit most people fine. Just know that if you do splurge, the Control Freak has proven it can handle meticulous cooking and consistently deliver stellar results. There’s no doubt it’s a high-performance machine, but for most cooks, it’s like opting for a Bugatti when a Prius will get the job done.