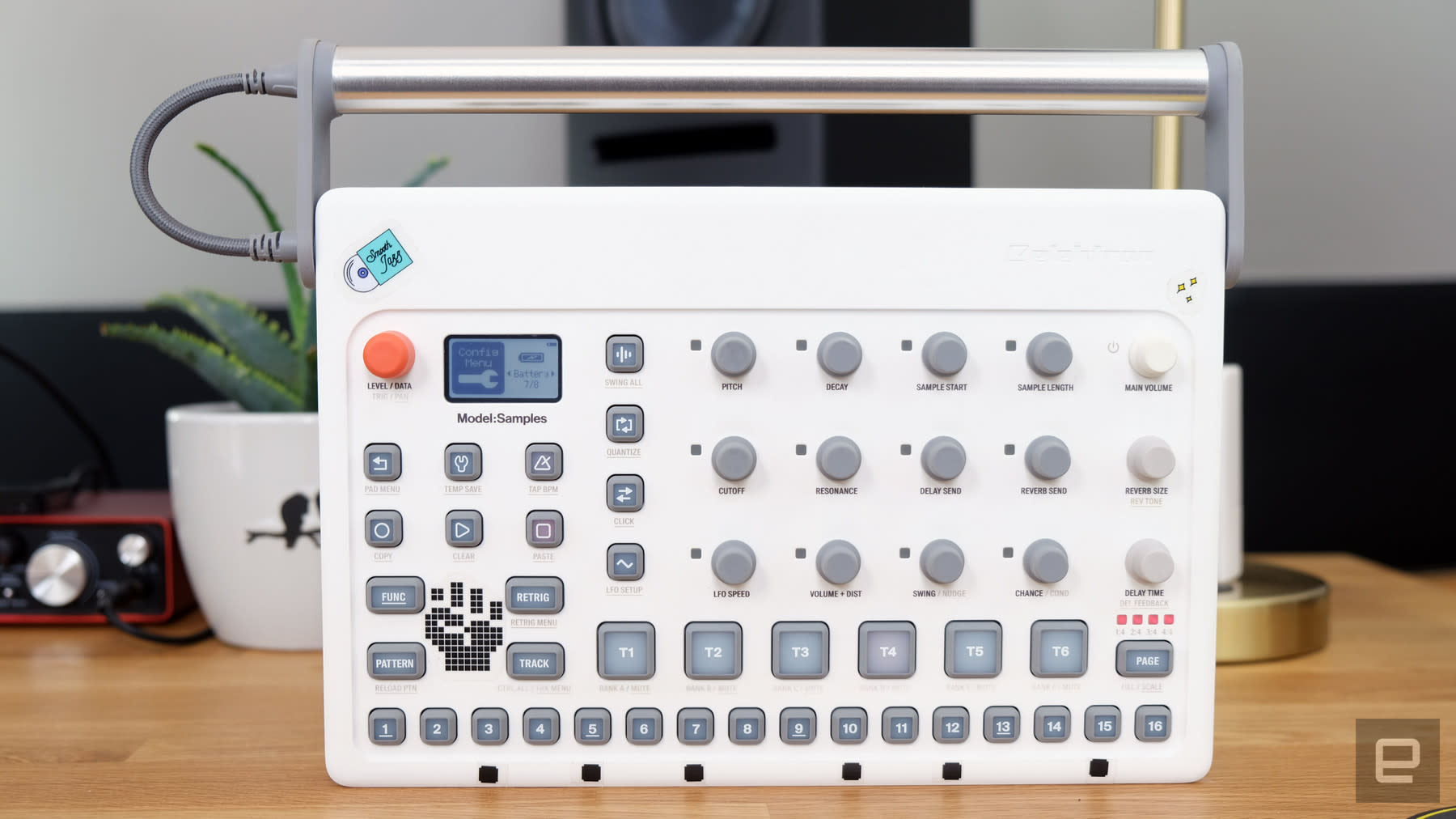 Two and a half years and $50 later, you can finally use your Model:Samples on the train.

Elektron said that it was working on the Power Handle for its Model lineup way back when the Model:Samples was first announced in early 2019. But 2019 came and went without an update. Then in February 2020, the company released the second member of the Models family, the Model:Cycles, and alongside it fresh details about the Power Handle BP-1, which it said would cost $39 and arrive “at a later date.” Well, that later date is finally here. At the end of May — almost two and a half years after originally announcing it — Elektron released the Power Handle for $49.

So, what exactly is the Power Handle? Well, it’s basically just a tube that holds AA batteries. It attaches to the two slots on the sides of whichever Model device you have. Normally they’re covered by small circular plastic tabs, but you can easily pop them out.

In addition to letting you use either the Model:Samples or Model:Cycles while you’re out and about, the Handle naturally works as a carrying handle as well as a stand. It’s not the greatest stand, though. Folded all the way under a Models unit its rock solid, but leaves the instrument at a very shallow angle. If you lift it to get a steeper work surface it’s less steady. The rubber feet underneath no longer make contact with a table or desk properly, so it has a tendency to slide around. And, as I’ve mentioned in my reviews, the pads require you to hit them pretty hard to get full velocity out of them, so I don’t imagine the stand would stay in place all that well during a lively jam session. In short, keep the stand folded underneath… at least it’s slightly better than being flat on the table.

Elektron claims you can generally get between five and seven hours out of four AA batteries, depending on things like LCD brightness. In my experience, four to five hours is a bit more accurate, even with the LCD on low. It’s plenty for making beats while sitting in the waiting room at the mechanic, but I probably wouldn't want to rely on it for live jams or performances.

You’ll also immediately notice that the Power Handle still requires a cord. A plug comes out of one end of the handle and connects to the five-volt power jack that was hidden under one of those plastic tabs. The cable is a braided gray that matches the Elektron aesthetic, but it still feels a bit inelegant. I really wish the company had built the connector into the Handle’s plastic hinges or used a flat cable that sits flush with the device.

Those gripes aside, it’s still great to be able to use the Model:Samples and Model:Cycles completely untethered. I’ve been doing this for ages with a USB power bank and power cord I bought on Amazon. The cable costs about $6 and the power bank could probably keep the either Models device going for days with regular use. But, it’s certainly not an ideal setup. For one, once the Power Handle is attached, you never have to take it off. The cable and power bank are two more things to carry and potentially lose. Plus, if you’re working in a cramped space, the handle takes up less room while giving you a better angle to work at.

A firmware update also gives you a few minor benefits when using the Power Handle. For one, it can tell when it’s running on battery power and adds an extra step to the bootup process to avoid it accidentally turning on in your bag. There’s also a small battery level indicator now on the screen, though it’s hard to tell exactly how much time you have left.

I’m a huge fan of Elektron’s Model:Samples and Model:Cycles. And at $299 they’re downright steals when it comes to music production gear. But I won’t lie, I can not figure out what exactly took the company so long to release what is essentially a metal tube that holds AA batteries, nor can I figure out exactly why it costs $50. It finally makes the company’s budget grooveboxes truly portable, but that's a feature much of the competition had from day one. And there are definitely more cost-effective ways to get most of the same benefits.