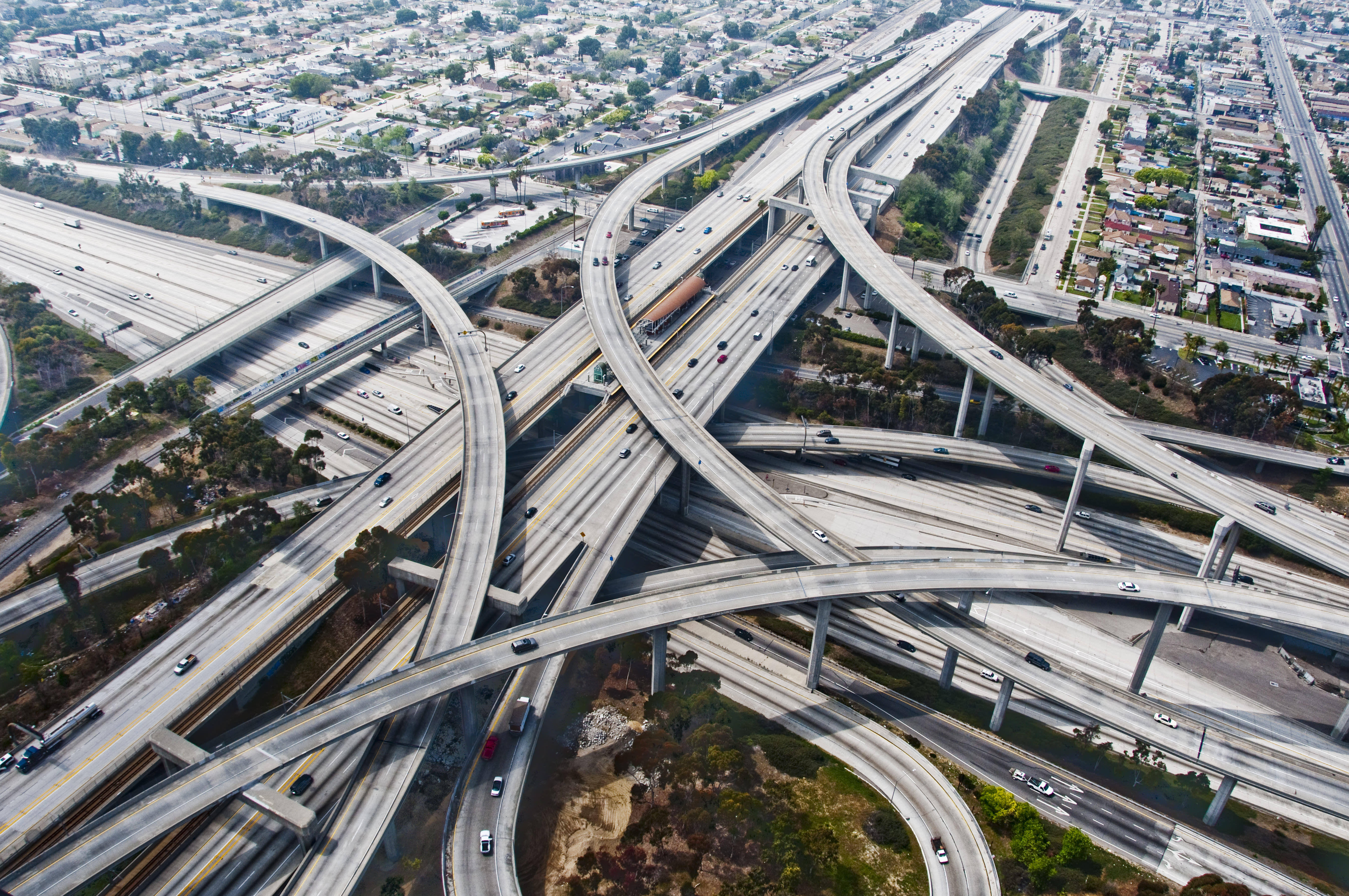 Hitting the Books: How Los Angeles became a 'Freewaytopia'

The city of angels wouldn't be the town it is today without them.

Some 515 miles of freeway snake through greater Los Angeles, connecting its 10 million residents from Sylmar in the north all the way down to the shores of San Pedro. Since the opening of the Arroyo Seco Parkway in 1940, have proven vital to the region but their construction has not come without significant social costs — neighborhoods razed, residents displaced, entire communities cleaved in twain by the sprawling transportation infrastructure. In his latest book, Freewaytopia: How Freeways Shaped Los Angeles, author Paul Haddad takes readers on a whirlwind tour through the history and lore of Los Angeles' sprawling highway system. In the excerpt below, we take a look at the 110 Harbor Freeway where the first live traffic updates via helicopter took place.

Over the next four years, the Harbor Freeway began to coalesce. Press alerts went out with each new off-ramp as they came online: Olympic. Washington. Slauson. Almost all were accompanied by the kind of theatricality that defined the era. One of the dedications featured a shapely model named Ann Bradford, who wore a sash emblazoned with the words “Miss Freeway Link”—certainly one of the clunkier female honorifics dreamed up by a Chamber of Commerce. Even the freeway’s old nemesis, Kenneth Hahn, couldn’t resist attending the 124th Street opening. At the ribbon-cutting on September 25, 1958, Hahn boasted that the freeway—now stretching ten miles—was already L.A.’s second-busiest after the Hollywood Freeway. When it’s completed, he said, it will carry more traffic than “any street, highway, or freeway in the world.”

The Harbor Freeway’s immense popularity—even in unfinished form—did come with some growing pains for motorists. The Downtown section proved to be a confusing lattice of bridges and ramps that required quick lane changes and sudden start-stops. As anyone who has merged from the Hollywood Freeway onto the southbound Harbor Freeway can attest, the maneuver requires a “Frogger”-like thread of the needle through three lanes of traffic within a quarter of a mile, lest you find yourself involuntarily exiting one of the Downtown ramps. The nerve-racking exercise is compounded by incoming motorists from the Arroyo Seco crossing the same three lanes from the other direction—left to right—who are seeking the very exits you’re trying to avoid.

Pulling off either move is nothing less than a navigational baptism for newbie drivers. Some drivers can’t pull it off at all. Such was the case for Greg Morton, a thirty-four-year-old management consultant whose ordeal made him briefly famous. In March of 1958, just south of the Four Level, Morton attempted to weave to the right from the fast lane. Suddenly, a car veered into his lane and Morton panicked. He wedged the wheel leftward and found himself marooned on the center median, which, in those days, was simply a raised concrete strip with planters spaced every twenty feet. These planters posed a problem for Morton. He didn’t feel he could get a “running start” to rejoin the stream of whizzing cars. So, he waited for a break in traffic. And waited. And waited. As he was stranded, he tried to flag down eighteen passing police vehicles for help. Only one stopped. “You got yourself up there, didn’t you?” the officer chided. “Just start your engine and drive off.” Which is exactly what the cop did.

Things got so bad, Morton finally said to hell with it. He took a beach towel out of his trunk and started to sunbathe right there on the median. Perhaps this odd spectacle is what finally made a Good Samaritan assist this clearly delirious individual. The stranger was a civilian on a motorcycle who promised to make a call from a phone booth for help. Sure enough, a sympathetic officer arrived within minutes and stopped traffic long enough for Morton to escape the median. All told, the Highland Park resident had been stranded for an hour and fifteen minutes.

When asked about it later, Morton was shaken but took it all in stride. “I’d have given twenty bucks if, as there should be, there’d been a telephone out there I could’ve used to summon help,” he said.

Perhaps Kenneth Hahn was listening. Four years later, Hahn—by then a county supervisor—was the driving force behind the installation of roadside call boxes. Hahn posed for a photo at one, placing an emergency call. It was on the Harbor Freeway.

While call boxes would have to wait a few more years, 1958 did see the first routine traffic reports from helicopters. Prior to this, freeway conditions were conducted by roving cars or sporadic airplane flights. Radio station KABC was first out of the gate with Operation Airwatch. Every weekday morning and afternoon, traffic jockey Donn Reed delivered rush-hour updates from the cockpit of a Bell whirlybird. It was an instant hit with motorists, and Reed had proof. One morning, he asked any drivers who saw his copter to flash their headlights. Six out of ten cars did.

The fact that so many commuters tuned in may have saved the life of a three-year-old girl toddling through traffic on the Harbor Freeway. Reed got his studio to cut into programming so he could warn drivers about her presence. As cars slowed and paused, she wandered off the thoroughfare, no worse for the wear.

Not surprisingly, the Harbor Freeway saw the bulk of traffic updates. By 1958, more than 318,000 vehicles per day were passing through The Stack. That same year, the Dodgers kicked off their inaugural season in Los Angeles after relocating from Brooklyn. Home games were played at the Los Angeles Memorial Coliseum as the team awaited their permanent field in Chavez Ravine. Built for the 1932 Olympics, the Coliseum’s football-length field was not designed for baseball, just as its dense Exposition Park neighborhood was not suited for battalions of cars jamming its streets from spring until fall. Parking lots around the Coliseum could accommodate only 3,400 vehicles, forcing most motorists to pay to park on people’s lawns or find street parking. One fan from Phoenix who flew in to catch the game had to walk twenty-four blocks afterward to find a taxi to his hotel—a longer journey than his plane ride.

Crushing traffic around the Coliseum backed up on the Harbor Freeway for a mile or more in each direction. The delays led to a Dodger fan stereotype that persists to this day: “Fans have been arriving as late as the third inning,” pointed out sportswriter Rob Shafer of the Pasadena Star-News. Mostly, though, Angelenos were so enamored by their Boys in Blue, any inconveniences were met with wry wit. “The one thing the Dodgers forgot to bring with them when they moved to Los Angeles was the New York subway,” quipped one newspaper. When Liberace had the gall to perform at the neighboring Los Angeles Memorial Sports Arena during a Dodger game, Rob Shafer swore that traffic on the Harbor Freeway created “some kind of human record for collective blood pressure.”