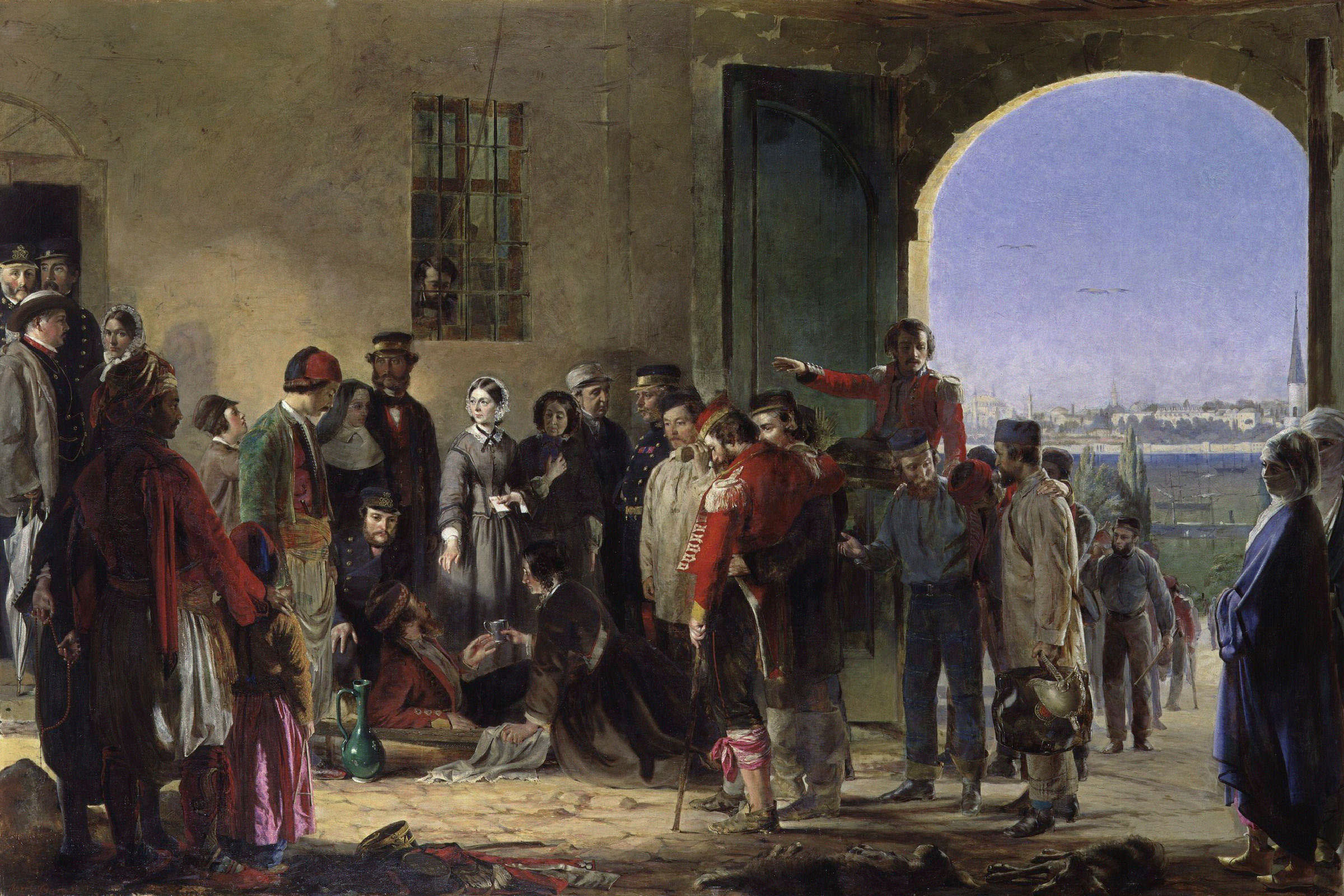 The Mission of Mercy: Florence Nightingale receiving the Wounded at Scutari by Jerry Barrett, 1857 - public domain

Her pioneering work also helped to launch the field of preventative medicine.

During Crimean War, hospitals of the day weren't so much centers of healing or recovery as they were the places where injured combatants went to die slightly more slowly. Turkey's Scutari hospital was one such notorious example. Converted by the British Empire from army barracks, Scutari lacked every imaginable amenity, from basic sanitation to sufficient ventilation, this "hospital" served as a potent incubator for myriad infectious diseases — that is until Florence Nightingale and her team of volunteer nurses arrived in 1854.

Maladies of Empire by Jim Downs explores how many aspects of modern medicine are borne on the backs of humanity's most abhorrent impulses, though in the excerpt below, Downs illustrates how one woman's unyielding tenacity and fastidious record keeping helped launch the field of preventative medicine.

Excerpted from MALADIES OF EMPIRE: HOW COLONIALISM, SLAVERY, AND WAR TRANSFORMED MEDICINE by JIM DOWNS, published by The Belknap Press of Harvard University Press. Copyright © 2021 by the President and Fellows of Harvard College. Used by permission. All rights reserved.

While in Scutari, Nightingale developed a system of record keeping that tracked a variety of factors at the Barrack Hospital and the nearby General Hospital. She took notes on everything from cleanliness to the quantity of supplies to diet to the placement of latrines and graveyards.

She also carefully examined the physical space. She took careful note of the size of the wards, the condition of the roof, and the quality, size, and placement of the windows. In her book on the health of the British army, like Thomas Trotter and others who wrote about the importance of fresh air, she pointed to the problem of improper ventilation, and she devoted an entire section to “bad ventilation.” She quoted the report of the sanitary commission, which remarked on the “defective state of the ventilation” in the Barrack Hospital. There were only “a few small openings here and there,” so that there was no way for the “hot and foul” air to escape. As an adherent of the miasma theory, she believed that diseases were spread through the air and advocated for ventilation to release the “foul air” from hospitals.

In addition to inadequate ventilation, Nightingale pointed to poor drainage and badly designed sewers and plumbing. In her testimony to the royal commission, Nightingale reported on the filthy conditions she found in the Barrack Hospital when she arrived. “The state of the privies... for several months, more than an inch deep in filth, is too horrible to describe.” She observed six dead dogs under one of the windows, and a dead horse lay in the aqueduct for weeks. The drinking water was dirty; once she saw used hospital uniforms in the water tank. Rats and insects abounded, and “the walls and ceilings were saturated with organic matter.”

In the conclusion to her report on the health of the British Army, she explained, “We have much more information on the sanitary history of the Crimean campaign than we have upon any other, but because it is a complete exam (history does not afford its equal) of an army, after failing to the lowest ebb of disease and disaster from neglects committed, rising again to the highest state of health and efficiency from remedies applied.

"It is the whole experiment on a colossal scale.” She pointed out that during the first seven months of the Crimean campaign, mortality exceeded that of the plague of 1665 as well as that of recent cholera epidemics. But during the last six months of the war, after sanitary reforms had been made, “we had... a mortality among our sick little more than that among our healthy Guards at home.”

Using mortality data that she had collected during the war, along with domestic mortality statistics, Nightingale showed that between 1839 and 1853, mortality among soldiers was much higher than among civilian men: “of 10,000 soldiers [at the age of 20], 7,077 live to the age of 39, out of whom 135 die in the next year of age; whereas out of 10,000 civilians at the age of 20, 8,253 attain the age of 39, and of those 106 die in the year of age following.” Nearly all mortality among soldiers was the result of disease; “actual losses in battle form a very small part of the calamities of a long war.” Nightingale classified the causes of death as “zymotic diseases” (which in the nineteenth century referred to infectious diseases such as fevers, measles, and cholera), “chest and tubercular diseases,” and “all other diseases (including violent deaths).” Nightingale was critical of the army’s classification system for diseases. At the bottom of a chart, she notes, “Bronchitis and influenza have no place in the Army nomenclature. The chronic catarrh of the Army Returns is believed to be really phthisis, in the great majority of cases; acute catarrh comprehends both epidemic catarrh, or influenza and bronchitis.”

Nightingale presented statistics using charts, tables, and diagrams, which were just beginning to appear in research reports, to make it easier for readers to visualize the comparison she was making. She developed a new kind of graphic, called a “rose chart,” also known as a coxcomb chart or polar area diagram, to present mortality data from the Crimean War. Each chart, which is laid out like a pie, shows data from one year, with the slices representing months. Each slice is divided into colored segments whose area is proportional to the number of deaths.

One segment is for deaths from wounds, a second for “preventable or mitigable zymotic diseases,” and a third for all other causes. A quick glance at the charts of deaths from April 1854 to March 1855 and April 1855 to March 1856 is enough to show that many more deaths were caused by disease than by combat, and that overall mortality decreased in the second year.

To further make visible the dangers of unsanitary hospitals, Nightingale gathered mortality data for matrons, nuns, and nurses working in fifteen London hospitals who died of the “zymotic diseases” of fever and cholera. She presented tables, which she notes William Farr compiled for her, showing that the mortality rate of the nursing staff was much higher than that of the female population in London; in addition, women working in hospitals were more likely to die of zymotic diseases than were other women. She used these figures to argue for the “very great importance” of hygiene in hospitals. “The loss of a well-trained nurse by preventible [sic] disease,” she wrote, “is a greater loss than is that of a good soldier from the same cause. Money cannot replace either, but a good nurse is more difficult to find than a good soldier.”

In her book Notes on Hospitals, she retold the story of the British prisoners of war who died in a crowded jail cell in India in 1756: “Shut up 150 people in a Black hole of Calcutta, and in twenty-four hours an infection is produced so intense that it will, in that time, have destroyed nearly the whole of the inmates.” Nightingale’s reference to the case is evidence for its status as the prototypical illustration of the need for ventilation. And the fact that it took place in India shows how British medical authorities used information from around the empire.

As a result of her work with large numbers of patients in the Crimean War, Nightingale framed her analysis like an epidemiologist, in terms of populations. She focused on how disease spread within a group. She devoted her energies not to changing bedpans or dressing wounds but to studying the structure of hospitals, analyzing statistics, and figuring out how to increase ventilation.

The war provided her the opportunity to compare mortality rates in varied settings: crowded hospitals, shabby tents, and wooden huts. It also underscored to her the importance of preventive measures, which constitutes one of the major tenets of modern epidemiology. By publishing her observations, her insights, and guidelines for hospitals to follow, she hoped to provide a set of rules and guidelines for physicians to follow to prevent the spread of disease. While efforts to ensure proper hygiene as a way to guard against illness can be traced to Mesopotamian civilization and Sanskrit writings from 2000 BCE, Nightingale’s warnings, in particular, and sanitary reform, more generally, sparked a critical turning point in the middle of the nineteenth century that gave rise to preventive medicine. This transformed military medicine from an enterprise that largely focused on treatment and surgery to one that began to engage epidemiological questions and issues.