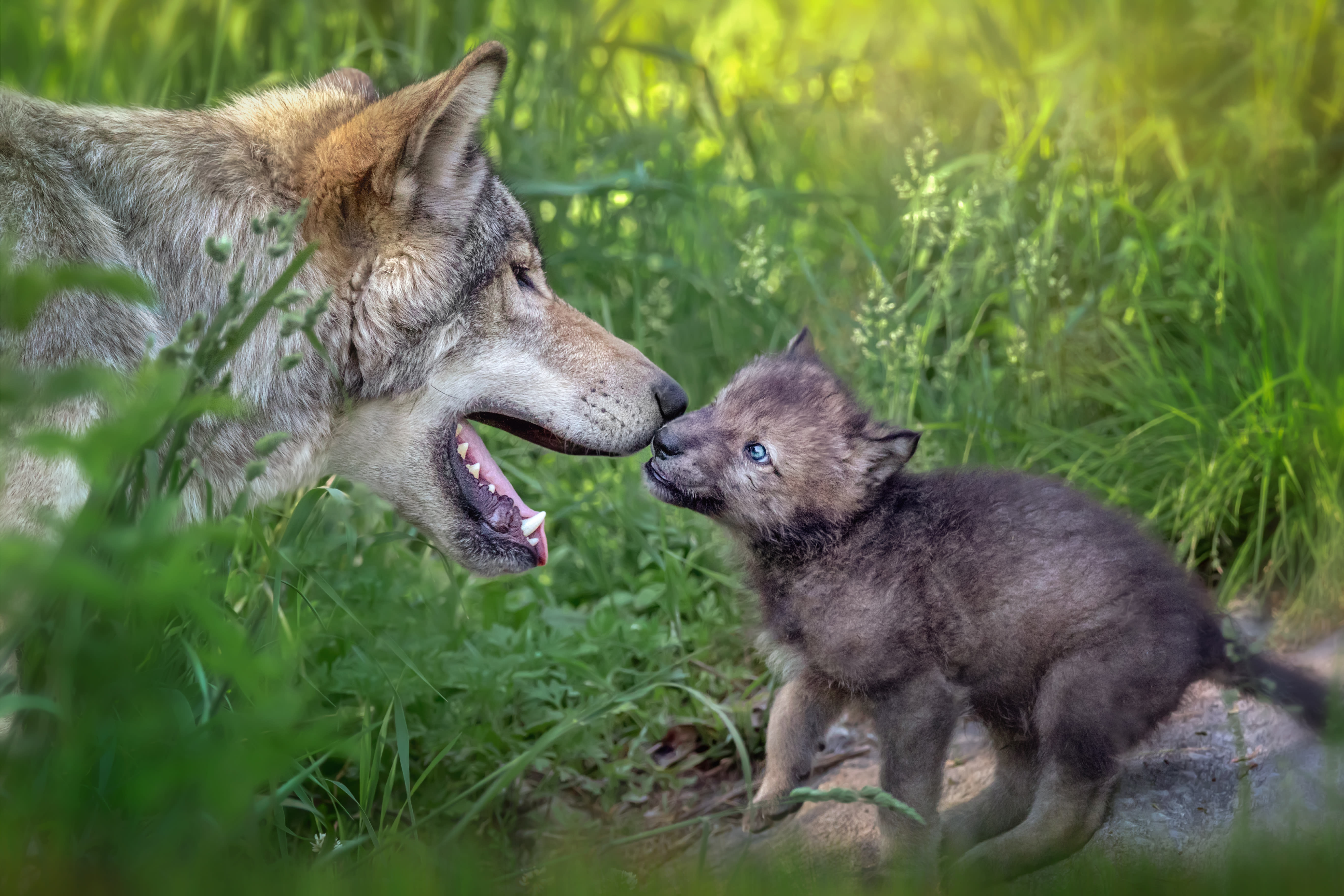 Hitting the Books: Domestication brought about our best fuzzy friends

Dogs are the best. Almost as awesome as cats.

Nearly 40,000 years ago, humanity had its best idea to date: transform the age's apex predator into a sociable and loyal ally. Though early humans largely muddled through the first few thousand years of the process, the results have been nothing short of revolutionary. The practice of domestication underpins our modern world, without which we wouldn't have dogs or cats or farm animals — or even farms for that matter. In her latest book, Our Oldest Companions: The Story of the First Dogs, Anthropologist and American Association for the Advancement of Science fellow, Pat Shipman, explores the early days of domestication and how making dogs out of wolves fundamentally altered the course of human history.

Excerpted from OUR OLDEST COMPANIONS: THE STORY OF THE FIRST DOGS by PAT SHIPMAN, published by The Belknap Press of Harvard University Press. Copyright © 2021 by the President and Fellows of Harvard College. Used by permission. All rights reserved.

To answer the question of whether or not the first dog evolved in Asia or Europe, we need to go back and create a good working definition of domestication.

“Domestication” has a very specific meaning. The term is derived from the Latin for “dwelling” or “house”: domus. In its broadest sense, domestication is the process of rendering an animal or plant suitable for or amenable to living in the domus, for being a member of, and living intimately with, the family.

Even in this general sense, the precise meaning of domestication is elusive. Are plants domesticated? Certainly some of them are spoken of as domesticated, as needing deliberate care and cultivation, and sometimes fertilization, by humans and, conversely, as having been genetically modified through human selection to have traits considered desirable. I am not talking about the relatively recent process of genetically engineering changes to plants; these modified products, such as soybeans, are known colloquially as GMOs (genetically modified organisms). Selection has been carried out for millennia by hunters, gatherers, foragers, gardeners, farmers, and breeders of various species through old-fashioned means, not in the laboratory. If you want, for example, violets with white stripes, what do you do? You try to nurture the seeds of those that show white stripes and pull up the ones that don’t, until you always get striped ones (if you ever do).

We can understand the general principle of selecting or choosing the most desirable plants — those that yield the most food under particular conditions, for example — but the practice of selection is somewhat paradoxical. The individual plants that produce rich fruits or seeds or tubers are the ones you would most want to eat — and those are the very ones you must save for the next planting season. Which is the most practical strategy? Why did people start saving the best seed? It is an awkward conundrum. As the late Brian Hesse wisely observed in his studies of early domestication, people who are short of food, even starving, do not save food for next season or next year. They simply try to live until next week.

The habit of saving seeds for another day must have arisen in relatively good times, when food was plentiful enough to keep some for the distant future. This implies that the motivation for domestication is not to ensure a stable food supply because undertaking the initial process of domestication makes sense only if you already have enough food. Plant domestication seems to be about improving the plant species in the long run. But you really don’t care if the plant is happy to see you or plays nicely with the children.

What is more, strictly speaking, domesticated plants — crops — do not exactly live with humans or in the home. In fact, because some of them, such as nuts and fruits, grow on trees, and most require sunlight, they could not possibly live indoors. Domesticated plants certainly do not participate in family life in any active way, though their needs and locations may shape the seasonal and daily round of activities and the locations of settlements. They don’t join the family. There is an odd sort of remote intimacy between crops and those who harvest or farm them.

The more you ponder the domestication of plants, the fuzzier the concept of “domesticating” them becomes. The earliest farmers or gardeners did not know enough about the mechanics of reproduction or genetic inheritance to know how to get a particular plant to fertilize some other particular plant and produce bigger corms, or juicier fruits, or non-exploding seed heads (which are easier to harvest), or tubers that were richer in carbohydrates. Domesticating plants was not a matter of learning which individual plants were friendliest or least aggressive toward people. And yet, over time, wisdom accumulated, sometimes accompanied by good luck, and humans did find out how to alter some plants’ genetics to foster a more desirable outcome. This discovery is often spoken of as the Neolithic revolution or the dawn of agriculture. It is generally thought to have occurred around 11,000 years ago. Agriculture as an organized system of growing food transformed at least some people who had traditionally hunted, gathered, and foraged for their daily food — mobile people living off the land — and turned them into more sedentary farmers, tied to fields and villages and dwellings.

The Neolithic revolution was not a win-win proposition at the outset. Several studies have shown that early farming peoples experienced a decline in their general health because they often had monotonous diets based on a very few staple resources. Having a narrower range of staple foods meant that those people were more vulnerable to normal variations in weather, such as too much or too little rain, or too hot or too cold or too short a growing season; and of course there were plant diseases, which spread easily when a whole field is planted with a single species. Growing crops also caused humans to live in more permanent settlements, which exacerbated problems with sanitation, water supply, and human crowd diseases.

Though farming supported more people living in higher densities than hunting and foraging, it also created perfect conditions for the spread of contagious diseases and parasites and for recurrent episodes of starvation in bad years. And then there was warfare. Among nomadic foraging and hunting peoples, disputes are often settled by one group moving away from the other. But clearing and fencing fields, planting and tending crops, and building storage facilities takes a lot of work, so people begin to defend territories — or to raid others’ territories when times are bad and their own crops fail. Excess foods, such as the seeds for next year or the vegetables saved for winter, could be stolen during a raid. Abandoning a cleared or planted field and a store of food is an expensive proposition, much more risky than simply shifting your hunting to another area when game gets scarce or your brother-in-law becomes annoying.

As best we know at present, the domestication of plants began about 11,000 years ago with fig trees, emmer wheat, flax, and peas in the Near East. At about the same time, foxtail millet was domesticated in Asia. How do we know this at all? We know it because of plant remains preserved under special conditions. Seeds can be preserved and sometimes were.

Many edible plants also contain starch grains and phytoliths, microscopic silica structures that are much more resistant to decay than leaves or stems. If found, these can also be used to identify plants that were used in the past; techniques such as radiocarbon dating can tell us when this occurred.

Historically, it was often assumed that plants were domesticated earlier than animals, but modern science shows that this idea is unquestionably mistaken. There is no logical reason why it should be true. The attributes and needs of domesticated crops differ a great deal from those of hunted or gathered foods; knowing how to raise wheat tells you little about how to look after pigs. Like fields, particularly rich hunting grounds could be invaded by others and were worth defending. But many hunters and gatherers or foragers were nomadic and lived in low densities out of necessity. Staying too long in one area depleted the local prey population. Whereas agriculturalists can store crops for the future, hunters cannot store meat for long in temperate or tropical climates, though extreme cold works well to keep meat frozen. Over time, crops are more vulnerable to theft than carcasses.

Domesticating animals involves other issues. Domestic animals are not normally hunted; indeed, they are not always confined and may be free ranging. Still, domestic animals can be moved to a new area much more easily than a planted field, a store of grain, or a pile of tubers, which simply will not get up and walk to a new locale. Such animals may even transport household goods as they are being moved. Moving domestic animals is a very different proposition from moving plant foods.

So why do we use the same word, domesticates, to describe both plant and animal species, and a single word, domestication, to describe the process by which an organism becomes domesticated? I think it is a grave mistake that has been based on outdated ideas and faulty assumptions. I do not believe that a single process is involved. I argue that plant and animal domestication are radically different because the nature of the wild species from which domestication might begin is also radically different. As well as having the inherent genetic variability that causes some individuals to exhibit more desirable traits, animals must also cooperate to some extent if they are to be domesticated. Animals choose domestication, if it is to succeed. Plants do not. Like animals, plants have to have enough genetic variability to be exploited by humans during domestication, but plants do not decide whether or not to grow for humans. Animals must decide whether or not to cooperate.