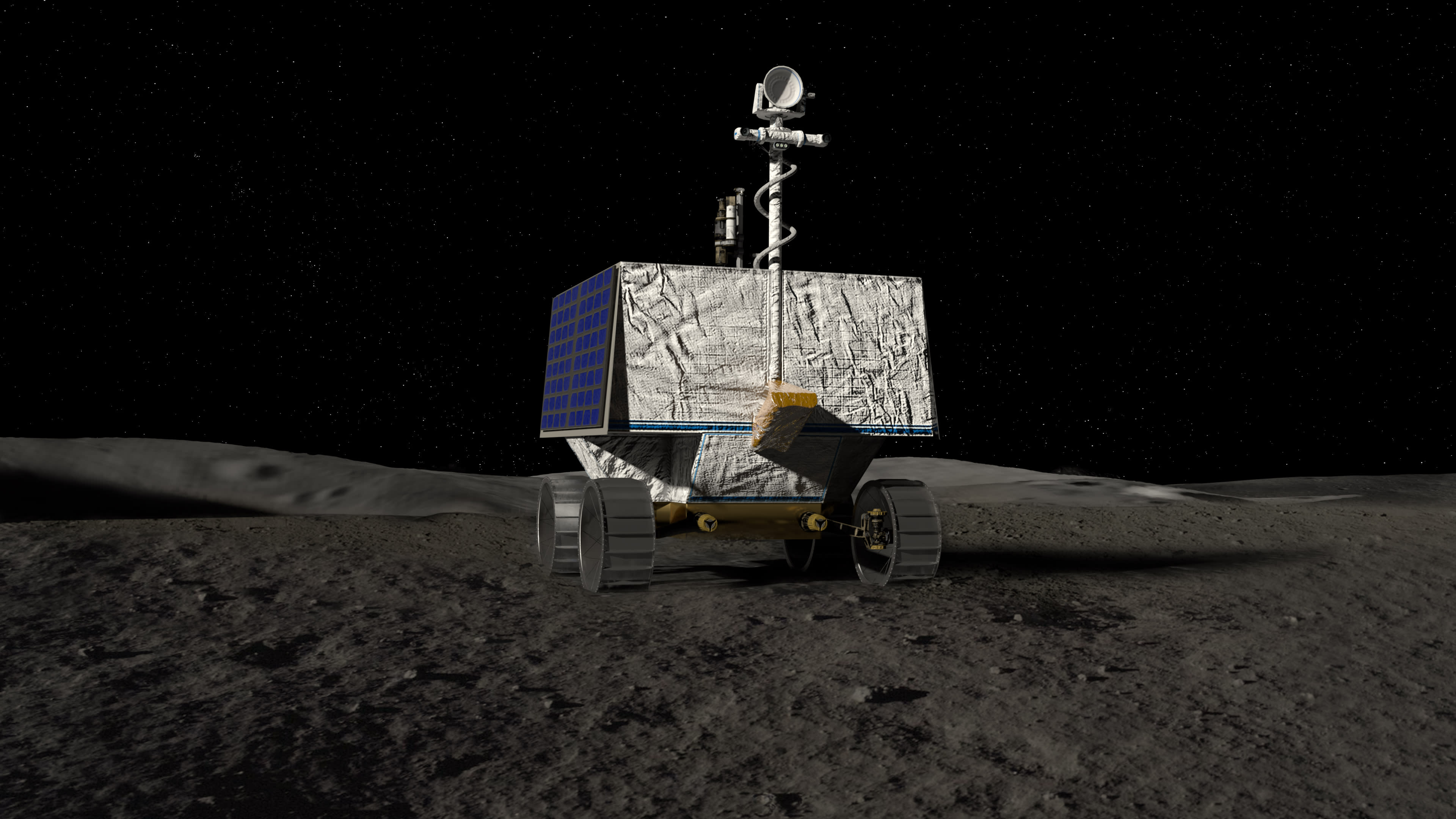 The VIPER will wield a meter-long 'TRIDENT' and three spectrometers in its hunt for ice.

Once you get offworld, count water among your most valuable resources: drink it, wash in it, use it to power your spacecraft. This humble molecule is critical to space exploration and exoplanetary colonization which is why, ahead of an international effort to establish a permanent human presence on the Moon (aka the Artemis Program), NASA scientists plan to land the world’s first autonomous lunar rover there in search of dihydrogen-monoxide deposits worth their weight in gold.

We’ve known that there is water ice on the Moon’s surface for nearly thirty years — potentially hundreds of millions of gallons buried amid regolith at the poles — thanks to the pioneering efforts of the Lunar Prospector, LCROSS, and SOFIA missions.

“Every mission, no matter what type, whether roving or not, will be standing on the shoulders of what was learned by other missions before,” Dan Andrews, VIPER project manager, told Engadget. “Otherwise you're just throwing away really good learning.”

However, we don’t necessarily have a great understanding of how those frozen molecules are actually distributed or how to best extract them from the lunar soil — and that’s where the upcoming Volatiles Investigating Polar Exploration Rover (VIPER) mission comes in.

As the VIPER trundles about, it will employ its Neutron Spectrometer System (NSS) to indirectly survey the soil around itself in search of water at depths up to three feet (.9m) by looking for the energy losses in cosmic rays (mostly in the form of neutrons) that occur when they strike hydrogen molecules. And where there’s hydrogen, there could well be water.

Once the NSS finds a suitable concentration, the VIPER will deploy its meter-long TRIDENT (The Regolith and Ice Drill for Exploring New Terrains) to drill down and pull up soil samples for examination by the onboard Near-Infrared Volatiles Spectrometer System (NIRVSS pronounced “nervous”), which can identify the hydrogen’s form, whether that’s free hydrogen atoms or slightly more complex hydroxyls. And even before the rover sets a wheel off its orbital delivery vehicle, the Mass Spectrometer Observing Lunar Operations (MSolo) will be sampling gases kicked up during landing in search of stray hydrogen atoms.

When the LCROSS mission slammed a probe into the moon’s surface, it measured and analyzed the resulting ejecta for water ice using variations of nine commercially available instruments that could be traced back to “everything from NASCAR car instrumentation to manufacturing.” The VIPER mission is taking a similar tack. While not directly a part of the mission itself, other units of the instruments that will land aboard VIPER will also be delivered to the Moon in both 2021 and 2022 as part of NASA’s Commercial Lunar Payload Services program for use in various experiments. This will serve as a sort of shake-down cruise for the instruments, allowing the VIPER team to see how the gear they’re sending will operate under real-world conditions. “If the instruments work beautifully, well great,” Andrews said. “If the instruments have a peculiar behavior that was unexpected, we can plan that in. And if they outright fail... we at least have the chance to try to diagnose why it did go wrong.”

While it won’t be the first wheeled vehicle to roll across the Moon, it will be the first autonomous vehicle to do so with a mission far more important than ferrying astronauts around. But the Moon is a harsh and unforgiving mistress, presenting an entirely unique set of challenges not faced by the larger rovers currently crawling over Mars. For one thing, Mars has an (albeit thin) atmosphere, the Moon has none, “which means it gets really, really hot, and it gets really, really cold,” Andrews said. “There's no moderating atmosphere so that becomes a really strong design point for the rover.”

What’s more, at the South Pole where the VIPER will be prowling the sun will rarely get more than 10 degrees above the horizon, which causes “unbelievably long shadows,” he continued. “And since there's no atmosphere, the lighting conditions are such that it looks to be very, very bright and right next to it can be unbelievably dark and black,” which can create havoc for visual navigation systems.

And then there’s the regolith — the moon’s razor-sharp, electrostatically-charged, insidiously-invasive soil. Created from eons of micrometeorite impacts, the stuff has built into berms and hills, lined craters and valleys across the lunar surface. Regolith can pile high and deep enough to bury the likes of a VIPER. So to ensure that the rover remains mobile, Andrew’s team taught it to “swim.”

Under typical conditions, the VIPER’s wheels roll conventionally at the ends of a rocker-bogie suspension system at speeds approaching a blistering half-mile-per-hour (that’s 20cm/s). Since the rover is powered exclusively through solar energy with a 450W battery, rather than a handy radioactive core, “we need to be able to move in any direction at any time, independent of how [VIPER is] pointed,” Andrews explained. “That means we need to be able to crab walk. So, each of our four wheels has the ability to independently be steered.”

And when the rover finds itself mired in regolith, it can turn these wheels sideways acting as scoops to drag itself forward. What’s more, the suspension setup enables the rover to lift each wheel independently, like a foot. Combining the vertical movements with dragging action somehow resulted in the Shaq-esque shimmy.

“We know we're going in and out of craters — and in fact we want to, because some of the areas where the water that can be found are going to be in very dark permanently shadowed craters — and because no robot or human has been down there, we don't exactly know what it's going to be like,” Andrews said. “So we needed to improve the capabilities of the rover to handle a lot of the unknown.”

The VIPER will not be driving blind, mind you. NASA is already hard at work producing a lunar road map to help guide the rover on its journey. The 3D, meter-scale maps were created using NASA’s open source Stereo Pipeline software tool alongside its Pleiades supercomputer to assemble satellite images captured by the Lunar Reconnaissance Orbiter using a technique known as photoclinometry. With them, the VIPER will be less likely to fall into craters or tip head over wheels trying to climb a too-steep incline.

Unlike its Mars-based cousins, VIPER won’t have to rely nearly as heavily on automation thanks to its drastically shorter signal lag time — 6-10 seconds compared to the 15-20 minutes needed to talk to Mars. That’s still too long a delay to take control of the VIPER directly from Earth, but it will allow Mission Control to plot a series of incremental 15-foot-long navigational waypoints. “Once we pick the landing site... which will be in October,” Andrews said. “We're going to pick the optimal traverse plan for the rover to get as much science as we can out of it.”

After VIPER completes its mission, NASA researchers should have a much broader and more detailed view of where water deposits are located in the region. But what will happen to VIPER itself once its duties are done?

While the decision on that subject is still being debated by the VIPER team, Andrews points to two possible outcomes. We could drive the rover into the deepest, darkest crater it can find, consequences be damned, to see just what the heck is down there (maybe ghosts!). The other option would be to park it on the highest and best-lit mound of regolith we can find and hope that the rover can be revived after the region sinks into 6 to 9 months of complete darkness.

“NASA would then have to decide if it is worth them keeping the team going for that amount of time,” Andrews conceded, “so when the South Pole comes back into the sun, to try to somehow bring Viper back to life... Is it worth it to NASA, is it worth the money, to do that? Those are the trades that the agency is going to have to make.”

All products recommended by Engadget are selected by our editorial team, independent of our parent company. Some of our stories include affiliate links. If you buy something through one of these links, we may earn an affiliate commission. All prices are correct at the time of publishing.
View All Comments
NASA's first lunar rover will scour the moon's south pole for water in 2023