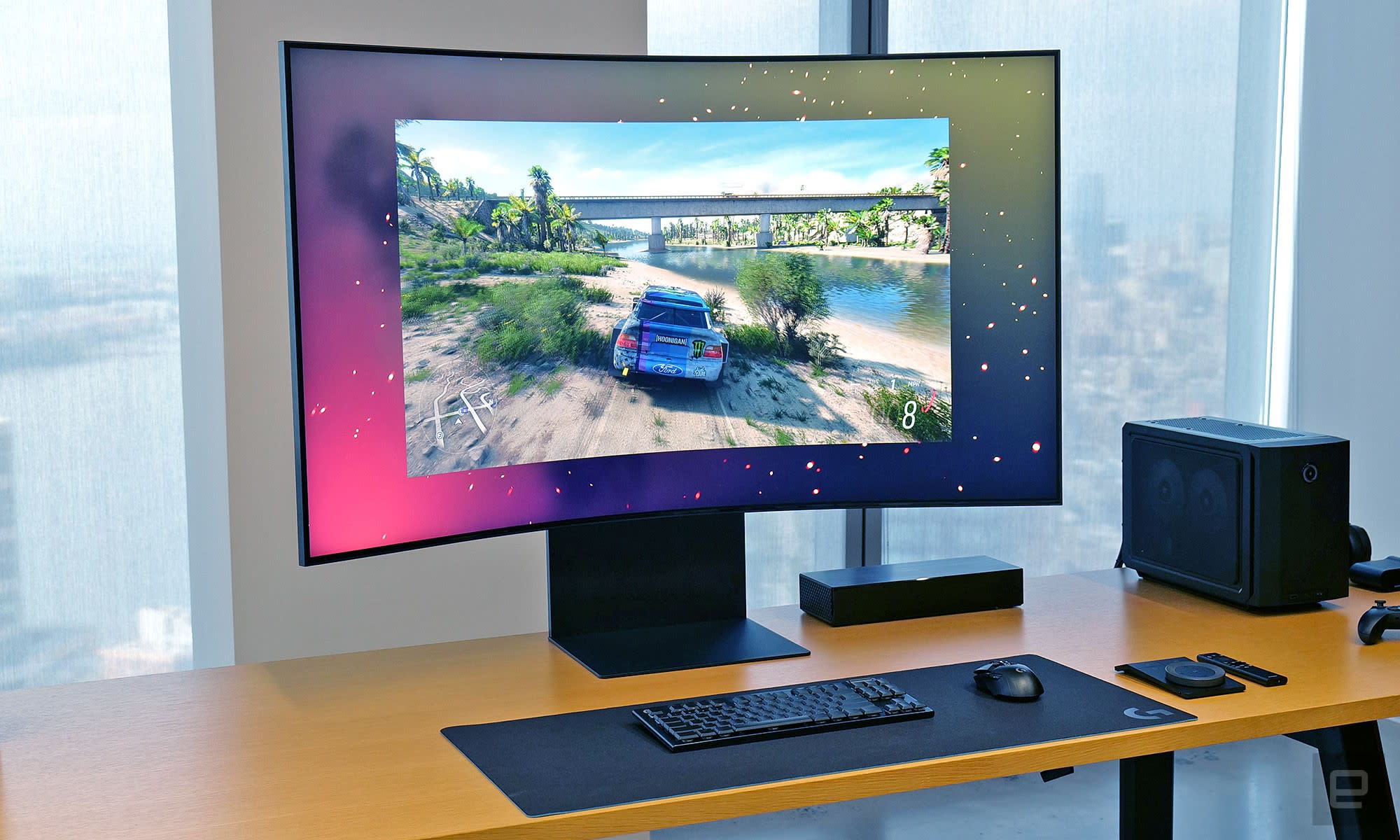 With a 165Hz mini LED display, six speakers and two remotes, what else do you need?

2022 has been a great year for monitors. We’ve already gotten the world’s first QD-OLED monitor from Alienware with another on the way from MSI. And earlier this summer, Sony joined the fray with its new Inzone brand of gaming hardware. But now, Samsung is taking things to a whole new level with the Odyssey Ark.

Boasting a huge quantum mini LED panel with a 1000R curve, the Ark delivers an immersive experience with great visuals and surprisingly good sound. Not only does Samsung claim that the Ark is the world’s first 55-inch monitor with a 4K resolution, 165 Hz refresh rate and a 1ms response time, you also get support for HDR 10+ and Dolby Atmos audio. And while the sound on many monitors is often an afterthought (assuming they can even output anything at all), the Ark features a total of six speakers: one in each corner and two woofers in back. And when combined Samsung says the Ark’s speakers were designed to create a dome of sound.

And now, after getting the chance to check this thing out in person, I can say this monitor is unlike anything else on the market. Even compared to other ultrawide displays, the Ark’s dimensions allow it to wrap around you like some sort of high-tech cocoon. Colors are rich and, thanks to its matte finish, you don’t have to worry about reflections ruining your graphics. The monitor also supports AMD FreeSync Premium Pro for VRR, so you can get the best performance regardless if you’re gaming on a console or a PC. And while you won’t see pure blacks like you would with an OLED display, Samsung says the Ark’s contrast is 4 times better than its previous-gen monitors.

Meanwhile, to make controlling the Ark easy, Samsung includes not one but two remotes, both of which have built-in solar panels so you don’t have to worry about keeping them charged. The first remote is similar to what you’d get with a TV, but the one that feels a bit more special is the wireless Ark Dial. It lets you quickly change video settings, adjust volume and switch between the monitor's special display modes. It’s super easy to use, and best of all, it means you don’t have to reach around back and fumble with hidden buttons or a joystick like you do with a lot of rival monitors.

The best thing about the Ark is all the modes and features Samsung included to help you get the most out of this giant panel. First, there’s Flex Move Screen, which allows you to adjust the size of your content and move it around, you know, in case you don’t need the Ark’s full 55 inches. There’s also Samsung’s Gaming Hub which supports game streaming platforms like NVIDIA GeForce Now, Xbox Cloud Gaming and Google Stadia natively. You even get RGB lighting on the back, not that you can really see it with so muchscreen between you and the rear of the display.

But my favorite thing is the Multi View mode, which lets you have up to three different apps open at once, including the ability to move and resize windows however you like. That means you can game while having a movie and social media on the side, or you can double up by having two games open plus YouTube, or basically anything in between. And if there’s a layout you particularly like, you can save that arrangement so next time, you can open everything up with a single press. The one caveat is that due to a limitation of HDMI, you can only display content from the Ark’s built-in apps and one external device at the same time. So while you can have a console and a PC plugged in at the same time thanks to support for four HDMI ports (all of which are HDMI 2.1), you can’t output content from both simultaneously.

Finally, there’s the Ark’s special move, which is being able to rotate into portrait orientation, or as Samsung calls it, Cockpit mode. You still get support for all of the monitor’s features like Multi View and Flex Move, but now on a display that curves up and over your head. And you know what, it really does feel like you’re sitting in the pilot’s seat on a plane. My only regret is that I wish I could have installed a shoot ‘em up like Ikaruga, so I could really take advantage of the Ark’s verticality in Cockpit mode. And if you want a huge new display but don’t have a ton of desk space, Samsung even includes a VESA wall mount in the box.

That said, starting at $3,500, the Odyssey Ark is a big financial commitment for anyone. But if none of the other monitors released this year are big enough for you, Samsung’s new flagship gaming monitor could be the massive centerpiece your home battle station needs.

[Update 8/22/22] Samsung has provided updated pre-order information for the Ark. The company says customers who reserve the Ark will receive $100 off its regular $3,499.99 price, and anyone who pre-orders will get an additional $200 e-certificate on Samsung.com for use on any other product besides the Ark.