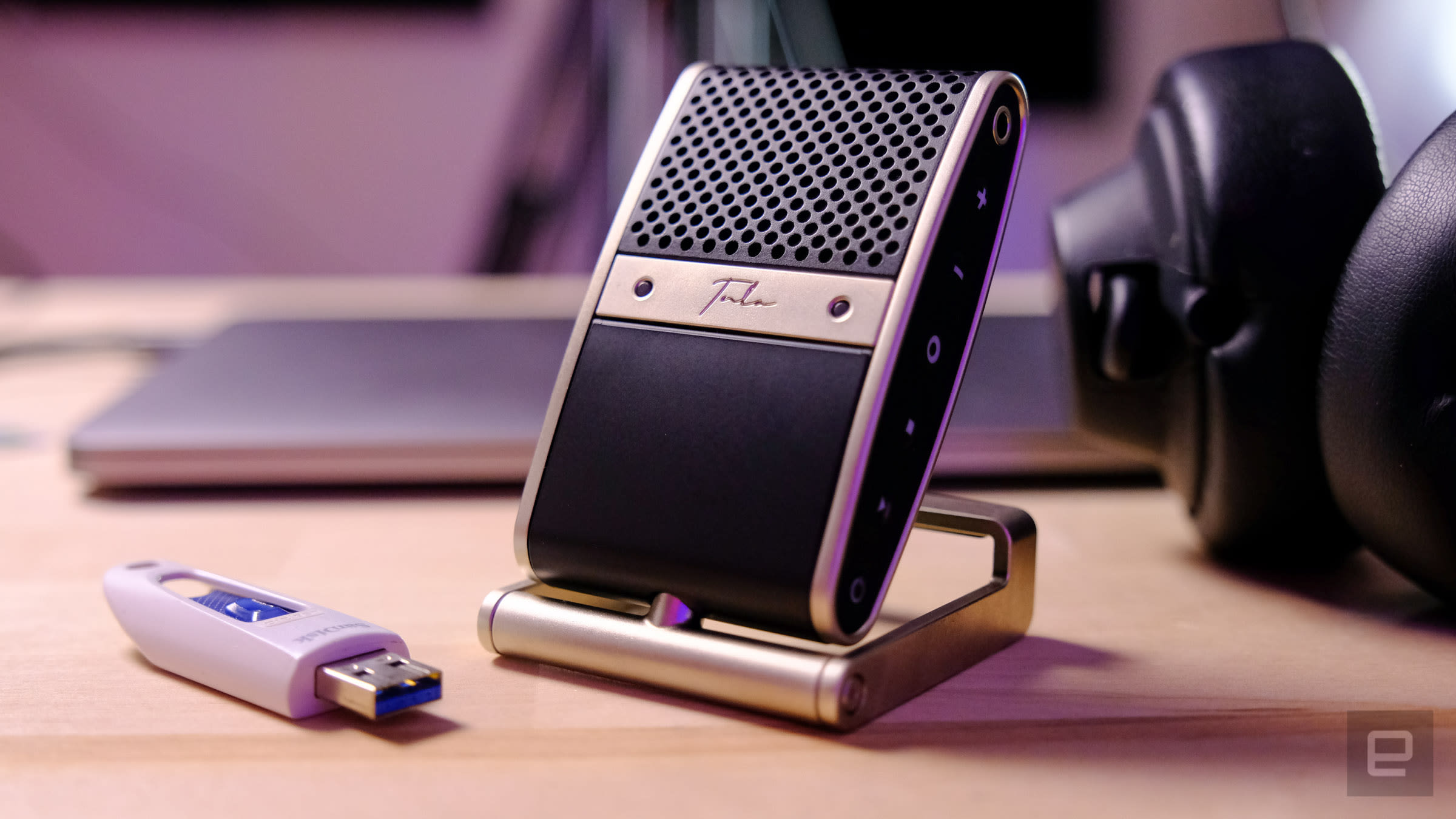 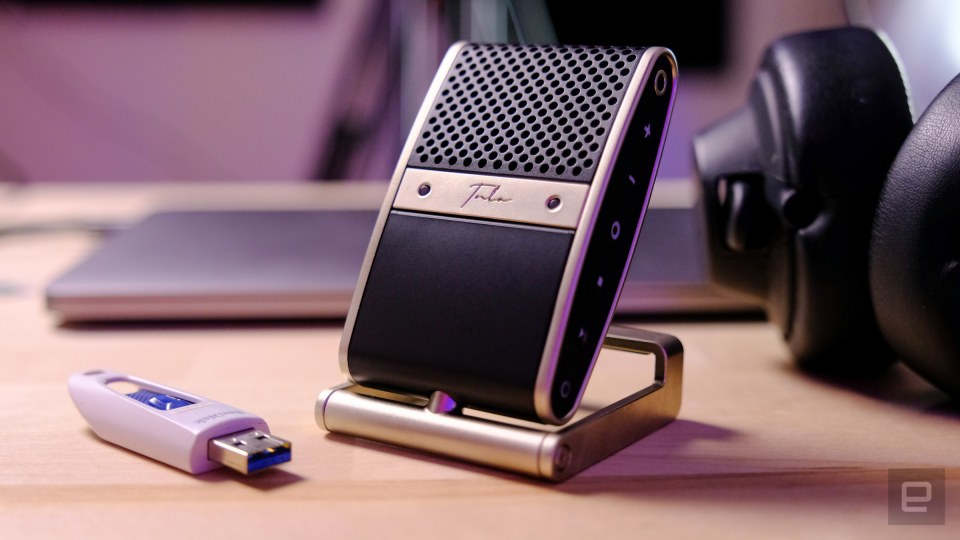 Ever since we all started spending more time at home, I've had to pay especially close attention to production gear -- we're now shooting our videos and handling our live streams away from our old office, after all. So far, I've struggled most with audio, especially when recording on the (socially distanced) move, which makes the new Tula mic an especially tantalizing option.

You probably haven't heard of Tula before, but you may be familiar with founder David Brown and his other microphone brand: Soyuz. They're best known for their strikingly designed, tremendously expensive TUBE microphones, seen in any number of the company's YouTube videos. Needless to say, recordings sound great -- as they should from a $3,000 microphone. The Tula is different: it's a surprisingly flexible portable recorder that promises quality audio and clever features for $199.

The first thing you'll notice about the Tula is its design -- while not nearly as ostentatious as a Soyuz, it shares a sense of old-school whimsy lacking in more "professional" gear like, well, anything Zoom makes. With its tiny flip-out stand and metal-and-plastic chassis, the Tula manages to come off as practical and adorable at the same time. (Or, "practicadorable, a word I will now use incessantly.) Just because it's sort of cute doesn't mean the team cut corners on controls -- The Tula is festooned with buttons to tweak gain, skip through files, toggle ambient noise cancellation, and play back recordings. Honestly, there's enough going on here that you'll probably have to keep the tiny manual handy at first.

But enough about that; how does this thing sound?

I spent part of an evening crooning and playing bass badly in my basement -- can you tell I miss karaoke nights? -- and came away mostly impressed with the Tula as a mobile recorder. Unlike our managing editor Terrence O'Brien, I've never really recorded myself playing anything before, so you could probably do without my less-than-professional opinion. Still, on the whole? Not bad at all, though I'm sure not doing the Tula's Burr Brown op amps justice.

To me at least, the Tula makes much more sense as a proper production tool. For one, the Tula also plays nice with TRRS lavalier mics like the one I wear when I shoot the to-camera bits of our review videos. I haven't been able to justify buying the sort of fancy wireless lav mic we used to use when shooting hands-on videos at briefing sites, but knowing I could run my cheapo lav directly into the Tula and sync with camera footage later is something I'm looking forward to trying in the field. And it certainly doesn't hurt that I haven't had to recharge this thing yet; Brown says the Tula can record for up to 12 hours with its AI-powered noise canceling on, or up to 17 hours without it.

That noise cancellation, by the way, might be one of the big reasons to splurge on a Tula instead of something like a Zoom H1n. It's designed to eliminate the low-level ambient sounds that pervade even the quiet rooms in our homes, and it certainly seems to handle those situations well. To really get a feel for how well the noise cancellation works, though, I fired up a hefty electric fan in my basement and started talking:

(Also, I'm a dummy -- I meant TOS communicators, not tricorders.)

The Tula also pulls double duty as a USB mic that connects to Macs and PCs, and despite its size, it stacks up favorably to the two other desk mics I use frequently: Blue's mostly venerable Yeti and the much-better Audio Technica ATR-2100X I use for all our streams. That's at least partially because of the flexibility it offers -- you can toggle the Tula between cardioid and omnidirectional mic modes, either -- the former is better for straight talking while the latter is well-suited for in-person group chats.

To get a sense of just how well the Tula stacks up, I did my best impression of an audiobook narrator and read the first lines of a favorite novel into the Tula and the Audio Technica, and the results were surprising:

I should quickly note here that both mics were connected to my work laptop via USB-C and were positioned the same distance away from my face. The Audio Technica mic did a really nice job here, reproducing my voice with even-keeled tones and notable substance in the low end. The Tula, meanwhile, sounded completely different: it in some ways sounds fuller, but I didn't get nearly as much meat in the low end. That said, how good these samples sound compared to each other depends a lot on what you're using to listen to them -- through a pair of Sony earbuds, the Audio Technica clip sounded better, but the Tula's rendition felt more satisfying through a MacBook Pro's speakers. Your mileage may vary, but I'd feel plenty comfortable tucking the Tula into my bag and using it as a portable podcast rig.

The only knock against using the Tula with a computer is its size; it's ideal for a device meant to travel with you, but the Tula's is a little too short to capture quality audio if it's sitting on a desk inches below your mouth. (Brown says the team plans to release a multitude of mounts so you can prop up the Tula properly, but for now, I've had to settle for a pile of books.)

While on-the-go audio professionals swear by their Zoom recorders -- with good reason -- the Tula is charming and competent enough in most scenarios that it could be worth the splurge for the stylish audio nerd. And who knows? The Tula has grown on me so much that I might start using it in our upcoming livestreams.

In this article: tula, audio, microphone, recorder, av, news, gear
All products recommended by Engadget are selected by our editorial team, independent of our parent company. Some of our stories include affiliate links. If you buy something through one of these links, we may earn an affiliate commission.