Chococat case cuddles up against our heart

Buy it while you can: Blast Arena Advance 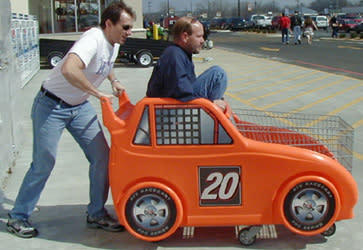 If you want to see cutting-edge technology, but don't have access to, say, a consumer electronics trade show (or this site), just head down to your local grocery store, as we've seen some fairly innovative creations implanted in this most atypical locale. The everyday food market has seen personal shopping assistants, carts that tag along behind you, and an ultra-pimped-out buggy for those who can't leave their flamboyant style aside for even a moment. Most recently, Publix supermarkets have attempted to address an issue that has apparently been nagging grown-ups for years: dealing with kids and maintaining their sanity (and humility) while trying to restock those bare cabinets. By introducing the TV Kart, reportedly shaped like a car and rocking a smallish display, Publix hopes to channel the attention of those rambunctious offspring into a wholesome episode of Bob the Builder, Barney, or The Wiggles. The cart, devised by the New Zealand-based Cabco Group, would cost parents $1.00 to rent while making their rounds, and Publix stores that agreed to offer such transportation would presumably receive royalties from the manufacturer. The kid-controlling carts are stored on "charging mats" while not in use, and though we aren't sure if there will be multiple shows stored for those really long shopping excursions, there's apparently no worry over battery life becoming an issue. Currently, the carts are being tested in five metro Atlanta stores, while stores near the Motor City itself are also showing interest -- but before you plop down your dollar for 30 minutes of peaceful shopping, just remember that all that bottled up energy has to be unleashed eventually.

[Via Fark]
In this article: carts, grocery cart, GroceryCart, Publix, shopping, TV carts, TvCarts
All products recommended by Engadget are selected by our editorial team, independent of our parent company. Some of our stories include affiliate links. If you buy something through one of these links, we may earn an affiliate commission.
Share
Tweet
Share