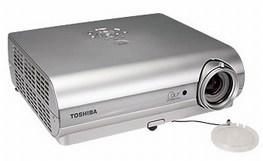 If you're guilty on numerous counts of projector envy, and don't feel like sharpening up your DIY skills to build your own rig, Toshiba has finally unveiled an option that just may cure your coveting. The TDP-S35U takes a small step down in specs from it's T45U counterpart, but manages to take a nosedive in the oh-so-critical price department. Sporting a silver case adequate for any board / living room scenario, the 6.6-pound mobile projector rocks an SVGA resolution, 2000:1 contrast ration, 2000 ANSI lumens, DLP technology, and a wireless remote to boot. The selection of ports aren't too shabby either, as it manages to boast dual VGA inputs, composite / S-Video connectors, audio inputs / outputs, and a VGA passthrough to forward the signal onto an additional display. Most importantly, however, the TDP-S35U can deliver that big screen delectation for just $699 when begins shipping later this month.

In this article: affordable, cheap, DLP, mobile projector, MobileProjector, PJ, projector, TDP-S35U, toshiba
All products recommended by Engadget are selected by our editorial team, independent of our parent company. Some of our stories include affiliate links. If you buy something through one of these links, we may earn an affiliate commission.
Share
Tweet
Share